We thought that for this issue, we might catch up with your typical KEA owner. Well we like to think so anyway. Long-time CMCA members, Bill and Dorothy McClintock currently own a KEA Dreamtime and I’m sure you’ll be pleased to know, are very happy with their motorhome. So happy, in fact, that Bill runs the KEA Owners Association, which allows KEA owners to keep in touch with each other. Bill supplies a regular newsletter KEA Mag and fellow KEA owners supply him with input.

It all started a long time ago when motorhomes first caught Bill’s interest in the late 1950s and early 60s. He saw a Volkswagen Kombi that had been home converted into a campervan. Not long after, when Volkswagen brought a number of their Westphalia Kombi conversions to Australia, he became more enthused but sadly at that time Bill couldn’t afford one. A few years later, though, after his marriage to Dorothy they bought a VW Kombi van and designed their own conversion sans pop-top roof because they were not available at that time and that became their first campervan.

Over the subsequent years of work, having four children, retirement and consultancy work, Bill and Dorothy have owned seven motorhomes (some self designed), hired even more and toured 25 different countries. For one big adventure, they travelled in Britain and Europe for five months in a motorhome; all the way in a Bedford (remember  them) based Adventura. One of their abiding memories was the non-turbodiesel – quite fuel efficient but not particularly fast. In many ways, Bill and Dorothy’s story is similar to that of club founders Don and Erica Whitworth who toured in a similar manner. They reckon they have covered more than half a million kilometres and enjoyed every turn of the road.

The couple purchased their KEA Dreamtime about three years ago and have been very happy travelling around in it ever since. Bill reckons one of the prime features is that it has more overhead lockers than most motorhomes. Another plus is the large table in the rear that can easily adjust to accommodate four to six people plus have a good board game and not be able to see what the others are doing. Dorothy reckons it gets Bill out of the kitchen when he’s not needed there.

We’re not quite sure who appreciates this feature, but few motorhomes have a throne room with a good window which you can discreetly open and view the world while attending to the daily visit. Still on water matters, according to

Bill, for the traveller who likes remote camping, a benefit of the Dreamtime is that it has great water capacity with 150-litre tanks for fresh and grey water. Additionally, the Vitrifrigo 130-litre fridge is one of the best performers that the McClintocks have ever had.

Dorothy reckons it is the little things in the design of the Dreamtime which make for a great motorhome. Items like a dedicated crockery drawer and good sized drawer for kitchen utensils, as well as the good drawer and cupboard catches. Something the RV industry frequently does not get right is a microwave at the right height which this motorhome has and moulded benchtops with lip to prevent spillage on the floor. One other item in which KEA was an early trendsetter was the remote central locking on all the doors, something that’s still not a feature on many motorhomes.

Powering the Dreamtime is a Ford Transit. Despite its poor cousin status when compared to its Euro rivals, Bill thinks that the old Transit has much to offer. That is particularly the case with servicing and spare parts.

Additionally, there are quite a few mechanical workshops that will service the Ford. Like most of the Dreamtimes, the McClintock motorhome has a few kilometres on the clock but it’s still capable of maintaining highway speeds and achieves a fuel consumption of 12/13 litres/100km.

Even with the lack of an island bed, few of the Dreamtime owners that Bill has spoke to would swap or change or trade for anything else, indeed he gets the odd query from potential buyers – something we know that our KEA dealers will be happy to help out with. The Dreamtimes are so spacious for their size and very practical to work in and on, as well as looking a very neat unit with that unique profile.

Of course, not everything is perfect with the Dreamtime but Bill and Dorothy reckon one of their biggest problems is not getting away in their KEA enough. It’s a problem familiar to many and certainly sums things up well we reckon. 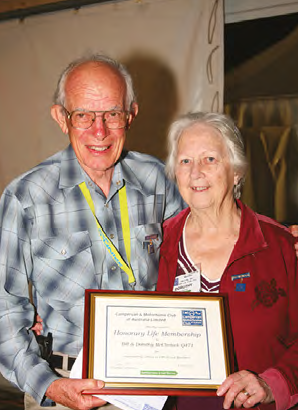