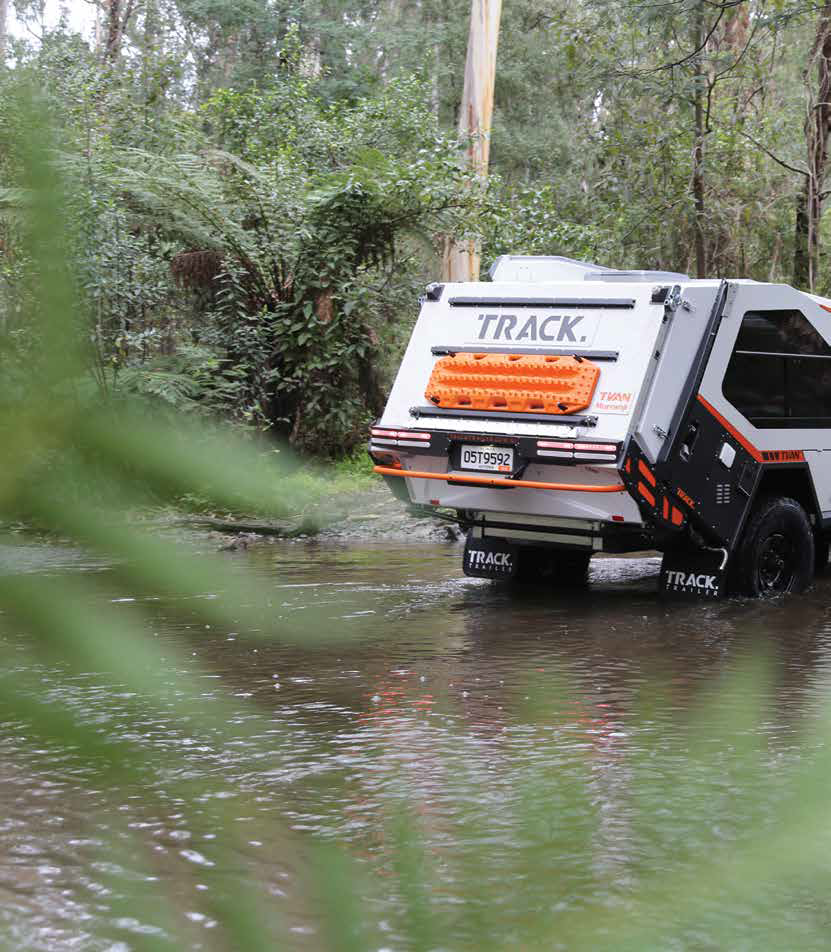 Gone are the days where being a greenie was left to the hippies.

Words like ‘carbon’ footprint’ and ‘sustainability’ are now firmly entrenched in our vocab, and are influencing our evolution.

No clearer is the movement to an environmentally friendly world than the introduction of electric cars, where carbon footprint is the key consideration.

While they currently only make up a tiny percentage of all cars sold in Australia, there’s no doubt in anyone’s mind that will flip in the next five to 10 years; and it will have a big impact on the RV sector.

Grant Webster, CEO of THL, the largest provider of RVs for rent and sale in New Zealand and Australia, says the company is already working on producing an electric motorhome.

“We’re putting a lot of research and development in that area, and hope to be trialling some vehicles on the road in the next 12 months.”

The key to its success, says Webster, is having charging stations in parks around the country.

That’s where The National Roads and Motorists Association (NRMA) comes in. Just a few months ago, the NRMA announced it would establish Australia’s largest electric vehicle fast-charging network.

It says the $10 million investment will deliver at least 40 chargers, more than double the size of the current network of chargers in NSW and the ACT.

The announcement follows the release of an NRMA report, The Future is Electric, which found while electric vehicles are more expensive than conventional vehicles, this is quickly changing, particularly with the mass production of more efficient batteries.

It says countries around the world are phasing out petrol and diesel propulsion, and  manufacturers and tech companies are rapidly moving towards an electric and automated future.

Paul Davies, CEO of Australian Tourism Park Management, which is owned by NRMA, says it wants to establish a network that covers the main touring route throughout eastern Australia.

“We want people to make the road trips they need without the fear of being unable to get there, and we want to see regional and travel economies supported, this is an important step in doing that.”

Davies expects the roll-out to take place in the next 18 months.

With electric cars, and eventually autonomous vehicles, comes the need for accurate mapping. This is an area HEMA, an Australian company specialising in detailed off-road mapping solutions, has been working on in recent months.

CEO Rob Boegheim says, “we’ve been quietly planning for this for a while by mapping our tracks to 0.5m accuracy for more than a decade, including alerts for creek crossings and difficult terrain”.

He says it has rebuilt its database from scratch with fully networked and navigable data to ensure it’s ready for this next evolution of the automotive and RV industry.

“To be fully autonomous, vehicles are going to need hi-tech sensors  to measure gradient, terrain, and surface type; and weather in real time and that’s something we’re continually working on.

“It’s one thing to have the system, but you also need it to go beyond responding to the sensor, and have a high speed predicative analysis to be able to react at hyper speed, just as our brains can in a near crash situation.” 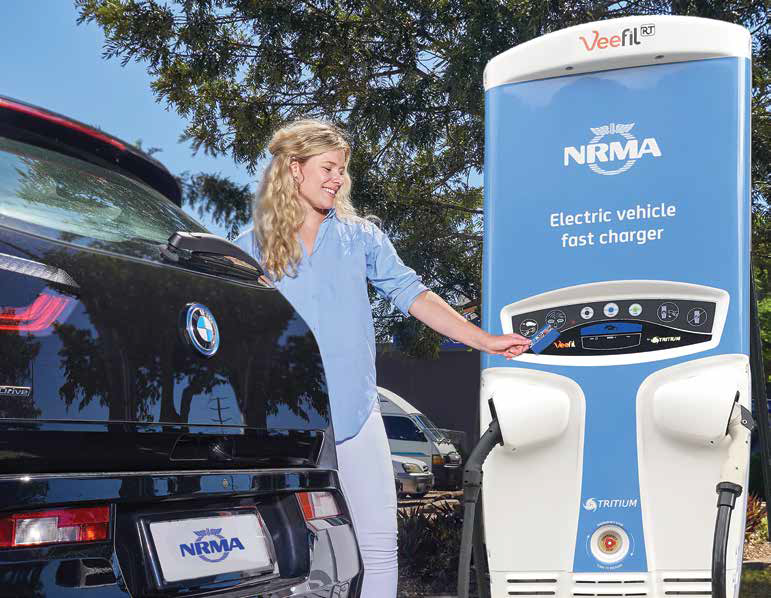 THE LONG ROAD AHEAD

Mark Palmarini, owner of Roma Caravans, says the RV industry should be completely re-evaluating itself in the light of this new age.

Palmarini, whose business is one of the oldest manufacturers in Australia says, “the industry needs to start knocking on  doors as a collective group and asking government, what are you doing about caravans which will become redundant and how do we encourage people to recycle these”.

He says a new industry could be born to recycle aluminium, steel, and plastics, but, “industry has failed and neglected these areas and they will bring the caravan industry into the dark ages”.

Track Trailer Director Gerard Waldron is also wanting to see some government intervention, “seeing international responses, that’s the sort of signal you’d hope to get from government, but the Australian government is a bit behind on all of that.

“The government could make a big difference by saying this is what  we’re trying to achieve and having targets.”

Caravan Industry Association of Australia CEO Stuart Lamont says it is actively in discussions with government about this area.

“We are leading the conversation with government on how to have connectivity and electric vehicles, and already have power head supplies, and are looking at evolving and investing those products, and some co-investment for commercial caravan parks to install those facilities.

“It’s something we need to deal with. What the US and Europe dictate we’ll get, and so we’ll need to respond to that. We are also seeing commercial caravan parks embrace sustainable features, replanting gardens and solar panels, LED lighting, low water use washing machines, and installation of waste disposal units so there is better and more opportunities.”

“We are seeing an increase in collection of rain water in tanks, which can be redirected to washing of vans and, following the European  trend, manufacturers trying to take weight out. Manufacturers are conscious of the materials they put into caravans so they can meet consumer expectations.”

“We’re on the hunt to build a lighter caravan and are pursuing the use of carbon fibre, which hasn’t been used at all.”

Biggar says the whole body could be built out of carbon fibre, “we’re looking at doing that now, and bringing in one that’s more economical than the international models".

Waldron says it too is moving to a lighter model, but there’s a long way to go for industry to take the higher ground with its carbon footprint.

“The industry has to develop a greater level of sophistication because if you’re building a lightweight structure, it can’t have wasted material in it.”

And he says at the moment it still comes at a premium price.

“We all know a Porsche is a well engineered car, but you might still buy a car of lesser standards because it fits your price and there’s room for four adults in it, so the cost of achieving these is seen as quite high, but that makes a challenge for manufacturers that you need to achieve it at an affordable price, so the value proposition to customers is worth having.” 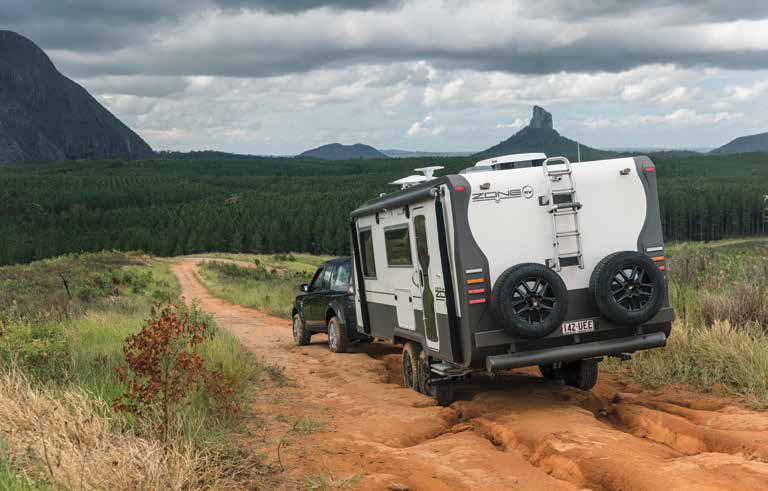 On top of that, “the consumer drive for solar is purely about being independent when camping. It’s about keeping your beer cold and food safe so you can stay on  the road longer, rather than out of environmental concern”.

But Waldron says as a leading manufacturer of off-road campers it’s certainly trying to do its bit, and is about to put, “something in the order of 300 solar panels on the roof of our factory, which means the operation of the plant is largely solar powered and that includes the lion share of the showroom air con”.

He says with more than an acre of roof space it also collects a lot of  water and has a recycling system, “that we use for testing water proofness of our vans”.

Others such as Cub Campers are also doing what they can. Managing Director Shane Fagan says Cub recycles using external contractors, with 40 bins of paper and cardboard alone now avoiding landfill.

It also sells off all discontinued and unused materials and in the future will have water tanks to utilise the 3000sqm of factory roof.

THL’s Grant Webster says its work in the area is now focusing on having zero infringement notices for illegal freedom camping by 2020.

“We’re not climate change evangelists, but we realise that sustainability as a business economically and socially all connects, and we need to do better.

“The difference for us and for tourism is, if you are a bank and you say let’s send some staff out to  plant trees, that’s great – but it’s not the same difference as we can make, we’re talking about respecting the environment and that’s real and it’s tangible ... and we can actually make a difference, we’re not just buying into a trend or fad.” 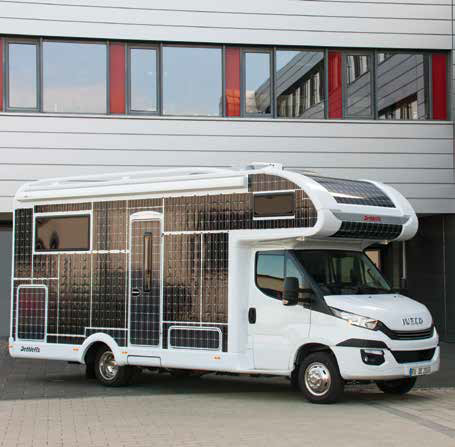 The German-made e.home (pictured right) is the first prototype for a battery-powered motorhome. Covered in 334 square feet of solar panels, it is expected to be released on the market in 2020. Built by Dethleffs, the e.home is based on the Iveco Daily electric chassis with a liquid-cooled three-phase AC motor, with a power of 80kW. It has a ‘CampConnect’ system which means everything from heating, lights, power, and central locking can be controlled via an app. Company spokesperson Anita Lorenscheit says there’s also a focus on safety. “We have installed an innovative safety system called ‘Mobileye’ which provides a ‘third eye’ in order to keep track of situations in front of the vehicle. It identifies potential danger on the road and forewarns the driver by acoustical and optical signals.”