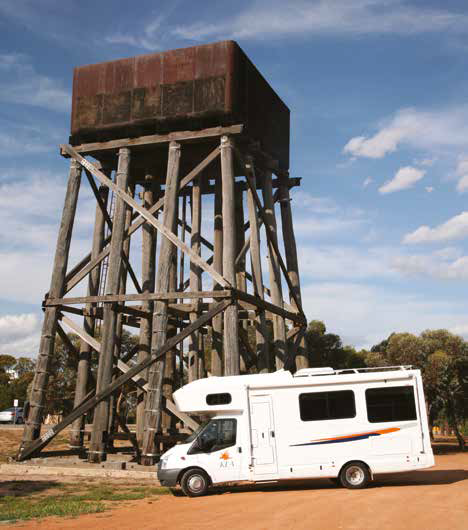 When choosing a pre-loved motorhome, you may wish to consider an ex-rental, particularly if you’re on a tight budget. Like any purchase, there are always going to be pluses and minuses, so I thought I’d share what to weigh up when it’s time to buy.

Let’s look at the pluses first. Generally speaking, most rental motorhomes are built for rugged use and often for first-time travellers. Apart from anything else, the latter objective makes them fairly easy to use. For the most part,  they are designed for people who stay in caravan parks, saving on weight for extra batteries, chargers, solar panels, and inverters. There are exceptions, with a few operators offering purposebuilt rentals or a fleet similar to what’s available on the retail market.

Having talked to a few rental operators in the business, I know they often use cab-chassis and or vans either known for their reliability and/or readily-available with a cheaper range of spare parts. The Ford Transit was a classic example, often chosen for those very reasons. When the Transit  disappeared from the Ford range, the operators had to look elsewhere.

Often rental motorhomes and vans are built to a budget, and therefore are quite simple in design, particularly in their interior cabinetry. For the handy worker who likes to tinker but doesn’t have the capability for a full blown rebuild, refurbishing an ex-rental to suit personal tastes can be a lot of fun, without the fear of devaluing a brand-new motorhome. One tip here is to make sure you use the motorhome a few times with the existing facilities before trying any changes. Another is to use a qualified tradersperson for any LP gas or 240V mains electrical changes required. Twelve-volt wiring isn’t regulated to the same extent, but it’s still a good idea to know what you are doing, especially with extra batteries and solar panels.

This might sound a bit odd but any vehicle can have inherent weaknesses surface after a few years’ use. An advantage of buying any used motorhome, not just a rental one, is that known problems can either be researched, recognised, repair-costed or discarded as appropriate. An example of this is the AMT gearboxes used in older Mercedes-Benz Sprinter and VW Crafter motorhomes. They have always been hesitant in lower range gear changes and whilst it’s a problem, it’s always been there.

For the most part, rental motorhomes will have a high number of kilometres on the tacometre, normally between 250,000 and 300,000km. Occassionally, though, rental motorhomes are sold much earlier than that. Across the Tasman, KEA’s NZ operation sells motorhomes used for less than a year, providing sufficient milliage to allow any technical/mechanical/functional problems to show without having too many kilometres on the clock.

Almost certainly a rental motorhome will have had plenty of use, often with inexperienced drivers who come from overseas. Similarly, the users often have had minimal experience with the appliances, which can suffer accordingly. That said, most experienced rental companies will have a good back-up facility, knowing all the tricks and techniques for a quick repair.

Another recognised problem is that rental motorhome layouts are often built for a purpose. So a base vehicle normally used in a two-berth retail model can be fitted out with four- or six-berth configurations. As a result, they rarely have fixed beds, and are more likely to offer day/night lounges, so the beds have to be made up every night. For a couple that can be annoying but there are ways around that. For instance, a six-berth motorhome can be set so the Lutonpeak bed or rear club lounge remains made, leaving what is usually the four-seat dinette in the middle for sitting and eating.

KEA has taken a different approach with its Beach motorhome by fully removing the club lounge in the rear  and replacing it with a fixed island bed. An interesting idea that offers potential elsewhere.

Lack of external bin storage is often an issue for some rental motorhomes and there’s no real way around that, except by learning to travel more lightly. Not that there is anything wrong with that I should point out.

There are a few other considerations, of course, but they are the major ones. As with any second-hand motorhome  purchase, mechanical and functional checks by qualified personnel are recommended. In the case of the ‘house’ area that’s less of an issue and can be done mostly by opening and closing everything, checking obvious leak marks and noting obvious damage marks. An extended test drive is mandatory. One final benefit of buying an ex-rental is my favourite. It’s very easy to try before you buy and so get an understanding of both the motorhome lifestyle and the particular motorhome under consideration.