It’s a fact that we are very privileged to live in the country we do, especially for recreational vehicle travel. There’s a vast country out there to explore and it can be, as long as we are sensible, comparatively safe to go just about anywhere without any problems.

KEA Tracks is no different to anyone else. Because travelling is fairly easy we tend to be a tad complacent about our personal safety. Relatively speaking, we don’t have much of a problem with personal attacks, pickpockets, theft or gun-related assaults. Consequently we tend to a bit casual about security, so here are a few thoughts.

Quite a few motorhomes these days come with security doors which are easily locked - if you don’t happen to have one then maybe that should be a consideration. Windows seem to be a different matter. A few styles are very difficult to climb into without damaging the frame but there are others around that make life very easy for potential thieves and (we are guilty here too) are left wide open when the occupants are away from their motorhome for an extended time. In some places, this doesn’t matter but there are other locations where closing and locking the windows is a smart move.

External bin doors are in the same category - often portable/valuable items such as a generator are stashed in external bins and they should either be chained up or the doors locked. Slightly unhelpful in this area is that there are often different keys for each bin door - most Australian manufacturers don’t seem to have grabbed onto the idea of one key for everything.

Inside the motorhome we reckon a small personal safe is good idea for extra security for keeping wallets, credit cards  and other small valuables. If nothing else, all items like that should be kept securely in a cupboard somewhere. Anyone who has been to Europe will know that many motorhome travellers keep all the curtains closed when their motorhome is parked. We reckon a better idea is to keep the curtains open but keep anything valuable well out of sight, so there is nothing to see. When in the USA last year, we noticed that semi trailers when parked but not loaded were left with the cargo doors open - nothing to see here [that’s common in the UK, too - Ed]

Camping location is important too. There are certainly free camping and roadside rest areas that get used regularly but arriving in daylight and choosing a good place to park is a wise move. In addition, parking in such a way so as be able to drive straight out in the event of a problem is definitely something to keep in mind.

Often when parking up we tend to gravitate towards civilisation and/or other campers but there are some places where it's better not to do that. KEA Tracks was in a western NSW country town late one afternoon last year and considering the merits of a local caravan park or one about 10km down the road. Discussions in a local coffee shop suggested that the one 10km down the road was a much safer idea. Slightly related to that, we know that many CMCA members like to be camped up by  about 4pm, in time for Happy Hour but KEA Tracks had a time constraint and was considering pushing on to the next town about 100km down the road. However, just prior to the caravan park discussion, someone mentioned that particular time of day was when the kangaroos started to wander on the road in numbers and that changed the decision that was being made.

If you don’t happen to own a motorhome then some of the items mentioned above could be kept in mind if considering a purchase.  Many people love the security of a self-contained motorhome in which they don’t have to get out in the middle of the night. Also for similar reasons a flat floor motorhome is  preferred where it is not necessary to get out of the motorhome in order to drive it away. Which is often one reason why solo travellers, particularly women, like the Mercedes Benz/Fiat Ducato large van conversions - easy to drive, easy to park and totally self-contained. 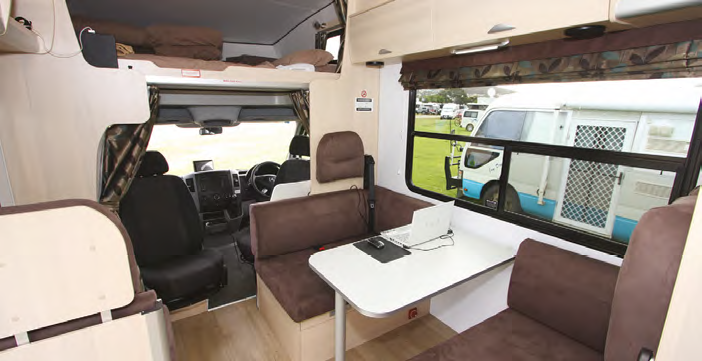