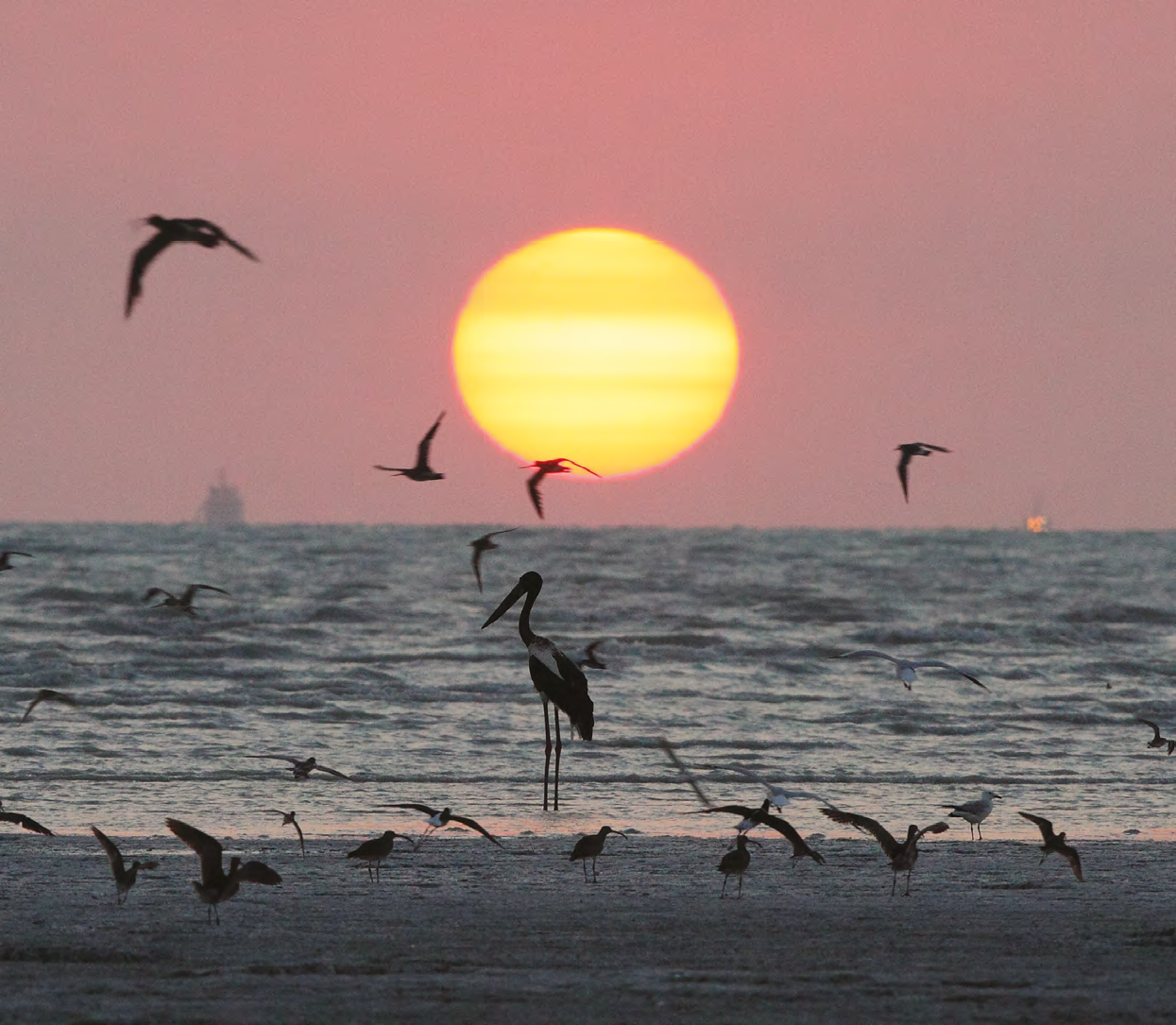 Catching a glimpse of brightly-coloured parrot feathers flashing through the bush or spotting the black-andwhite stripes of a family of baby emus in the desert are familiar thrills for many Aussie travellers. And whether you know your striated from your spotted pardalotes or not, our many and varied birds are part of what makes this country such a beautiful and fascinating place to explore.

That’s why there’s no better excuse for a holiday than an expedition to see our spectacular birdlife. And where better to see parrots, pigeons or pratincoles than one of  BirdLife Australia’s observatories and reserves? Dotted across the nation, spots like the Broome Bird Observatory in WA and Gluepot Reserve in South Australia are places where practical conservation and great birdwatching meet.

More than just out-of-the-ordinary holiday destinations, they form the backbone of BirdLife Australia’s research and conservation programs, helping to protect Australia’s native birds and the places they call home for future generations. Join us on an adventure to some of the most remote and beautiful birdwatching outposts in Australia and discover the incredible world of Australia’s birdlife. 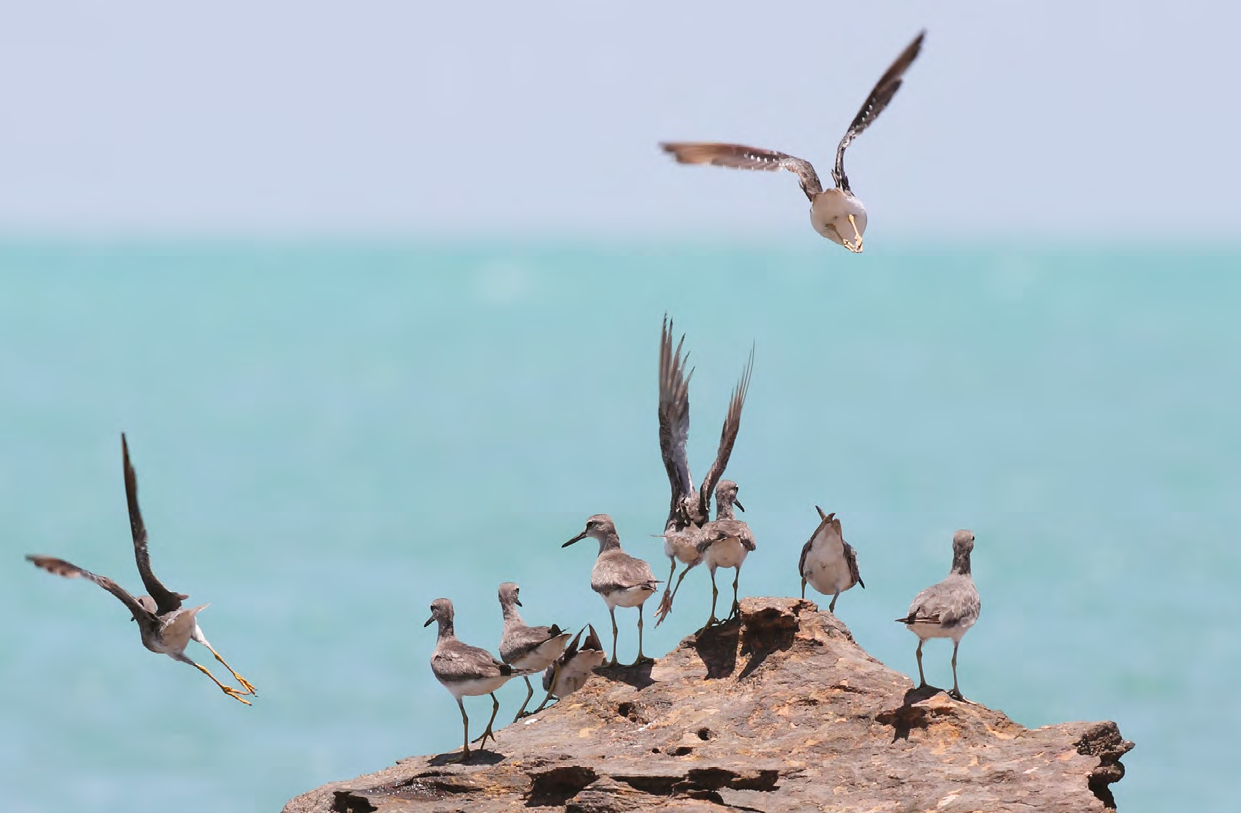 If you were writing a tourist brochure, making a big deal about your accommodation being next to a mudflat might not seem like a great idea – as far as tourist attractions go, it’s a strange claim to fame. But that is exactly what makes BirdLife Australia’s Broome Bird Observatory so special.

The vast, flat expanses of Roebuck Bay are home to a wider variety of shorebirds than any of the other mudflat in the world, with the estimated 800,000 birds visiting the Broome area every year representing a quarter of the world’s wader species. And while mudflats aren’t known for being aesthetically pleasing places, Roebuck Bay is an incredible sight, with miles of red sand and brilliant turquoise water stretching as far as the eye can see, punctuated by patches of brilliant green mangroves and the movements of thousands of shorebirds. 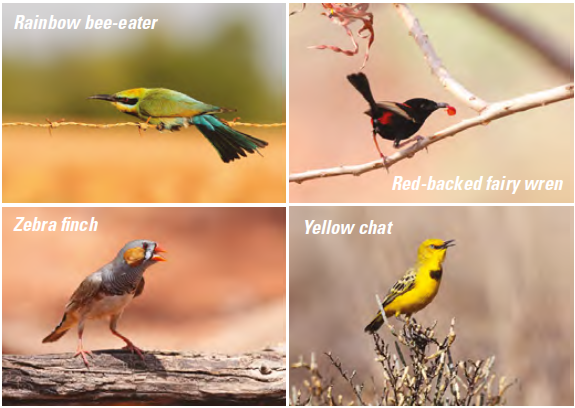 If you time your visit right, bird lovers can witness one of the most amazing events in nature – the sight of tens of thousands of shorebirds taking to the air to test the winds as they prepare to depart on a journey that will take them to the other side of the world.

But the bar-tailed godwits, red knots, curlew sandpipers, sanderlings, eastern curlews, whimbrels, ruddy turnstones and Asian dowitchers that visit Broome for eight months a year aren’t the only special birds to call the area home – the observatory’s permanent residents are also a delight.

The observatory is surrounded by lovely woodland and all the birds that go with it, including the famous resident great  bowerbirds, which obligingly construct their fabulous domains just metres from the campground. The other celebrated spot to watch the observatory’s bush birds is from inside the shade-house kitchen. Here you can sit and eat lunch while gazing at the birdbath outside, as babblers, finches, doves, whistlers and honeyeaters come to bathe and drink in the heat of the day.

The observatory offers a variety of guided birdwatching and nature tours that run daily throughout the dry season, giving visitors the opportunity to see a huge assortment of the local birdlife.

Although the conventional time to visit Broome is during the dry season between April and October, the Observatory sees plenty of action at the beginning and end of the wet too.

Broome lies on the coast of Western Australia, around 2400 kilometres north of Perth. The Broome Bird Observatory is located on the northern shores of Roebuck Bay and is 25 kilometres from Broome by road.

Staying at Broome Bird Observatory is the best way to experience the diverse birdlife of Roebuck Bay and the surrounding bush and plains and there are plenty of different accommodation options available.For more information go to www.broomebirdobservatory.com 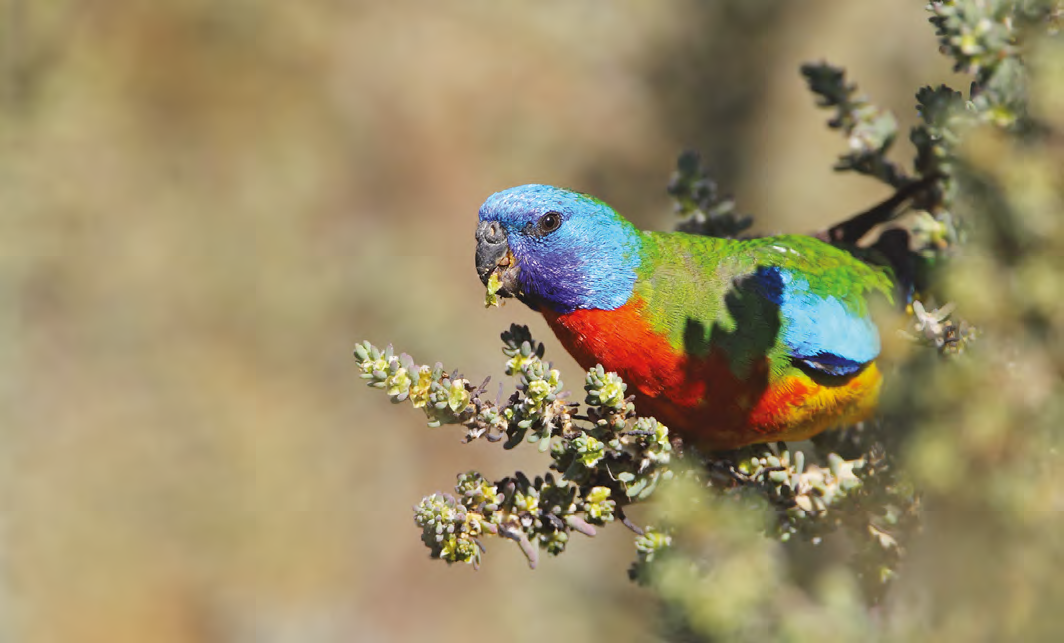 The Mallee has always rewarded those who look closer and take the time to peer beyond its green-greys and dusty reds, and Gluepot Reserve’s beauties are often as subtle as a striped honeyeater’s nest spotted gently swaying amid the gum leaves. Purchased by BirdLife Australia in 1997, the reserve, which has three campgrounds and many kilometres of riding and walking tracks threaded throughout, is a little over 3.5 hours’ drive from Adelaide.

Gluepot protects a unique environment and the birds, mammals, reptiles, flowers, bushes and trees that call it home. The latter are particularly intriguing – mallee gums can survive for hundreds of years and provide a home, food and protection for a myriad of biota, including nesting hollows for everything from Major Mitchell’s cockatoos to pardalotes. It’s estimated that some of Gluepot’s mallee gums are more than 1000 years old.

These special trees help make Gluepot a birdwatcher’s paradise, with 190 species recorded – 23 of them of regional or national conservation concern. Flocks of more than 250 regent parrots have been known to come down to the watering troughs, Major Mitchell’s cockatoos breed on the reserve, and southern scrub-robin, red-lored whistler, striated grasswren and chestnut quail-thrush are all residents. The beautiful but elusive scarlet-chested parrot is another specialty, as is the fascinating malleefowl, a species Gluepot researchers are keeping a close eye on through remote camera technology.

But rare and endangered birds are not the only drawcards Gluepot has to offer. It is a place of escape and refuge, not just for birds and animals, but for every person who visits too – an ideal camping holiday for those seeking big skies, tranquillity and the opportunity to see some of Australia’s most elusive birds. 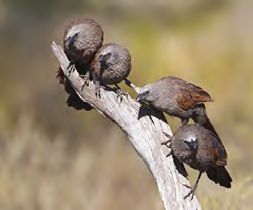 A gentle amble or bike ride along one of Gluepot’s many tracks is the perfect way to take in the local birdlife and environs. The reserve also= offers a variety of environmental education courses throughout the year – everything from GPS and GIS workshops to painting and botanical illustration courses.

Early spring is the best time to visit Gluepot, when the birds are singing loudly, but autumn and winter also offer many charms. In March and November temperatures can climb to more than 35°C and during summer temperatures often soar to 40°C and above.

Gluepot is located a well-signposted 1 .5 hours’ drive north of Waikerie and the Murray River in South Australia’s Riverland district.

Camping at Gluepot Reserve is the best way to experience the magic of the Mallee and costs just $10 per vehicle per day.For more information go to www.gluepot.org 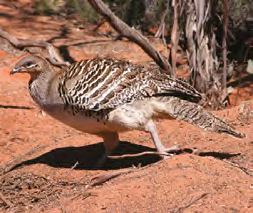 In the magnificent sand dunes and rocky escarpments that surround the Eyre Bird Observatory, 1300 long and dusty kilometres east of Perth, the need for water is constant – for humans and animals alike.

It’s a quest that was first recorded in excruciating detail in the 1841 journals of Edward John Eyre as he and four companions trudged across the Nullarbor Plain from east to west. The group had been without water for seven days and 160 miles when they finally scratched a well in the sand and were able to drink once more, restoring their strength in an area that became known as Eyre’s Sandpatch – today the site of the Eyre Bird Observatory.

The reliable water source at Eyre was why the spot was chosen in 1877 as the site of a repeater station on the Intercolonial Telegraph Line, which provided a link between the east and west coasts of Australia for the next 50 years. When the station closed in 1927, the limestone homestead fell into disrepair and would have been swallowed by the looming sand dunes were it not for the RAOU, which saw its potential as the site of a bird observatory and led the building’s restoration in 1977. 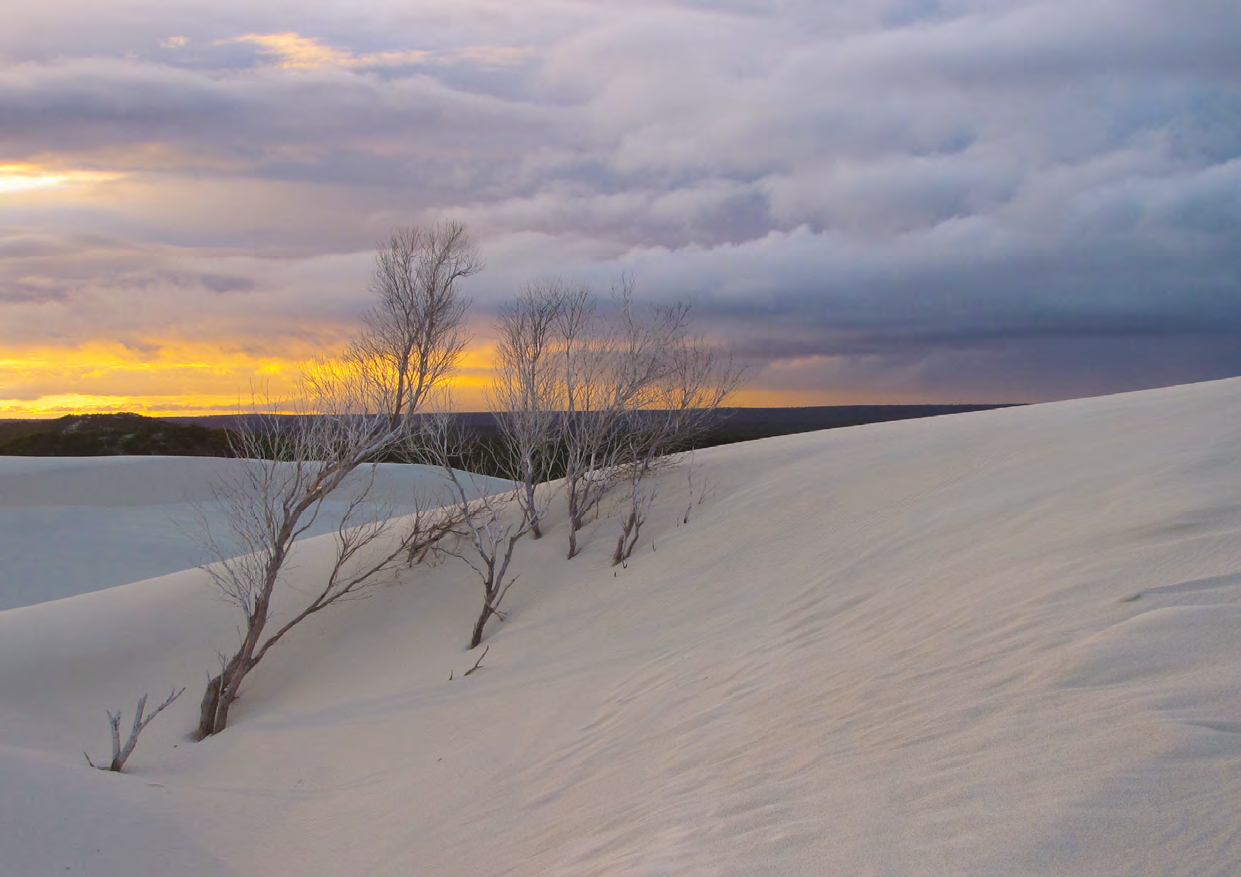 Today, as in Eyre’s time, the mallee on top of the scarp abounds in birds and wildlife. Over 240 species of birds have been recorded at the observatory and surrounding nature  reserve including malleefowl, Major Mitchell’s cockatoos, brush bronzewings, blue-breasted fairy-wrens and honeyeaters galore – the latter are particularly plentiful when the mallee is in flower. From June to August Eyre is also a whale-watching Mecca, with southern right whales weaning their young just 100 metres offshore providing a spectacular display for visitors.

The splendid isolation is what makes Eyre such a magnificent place for an adventure – make the effort to visit and you’ll be keeping company with nothing more than the dunes, the waves, the birds and the beasts. 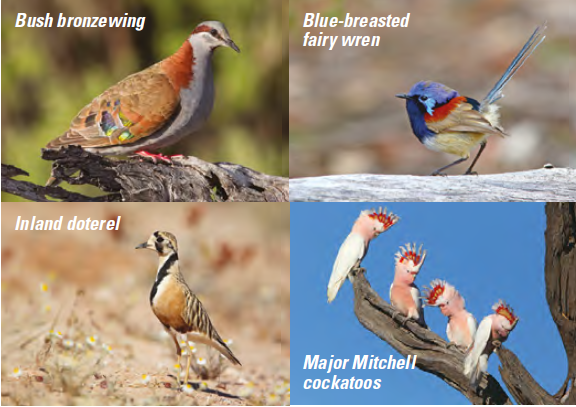 It’s hard to imagine the noise and chaos of inner-city Melbourne when you’re watching a pair of varied sitellas race headfirst down a gum tree in the peaceful surrounds of Clarkesdale Sanctuary, BirdLife Australia’s conservation property just west of Ballarat, but the bustling metropolis is just a couple of hours’ drive away.

Located in the middle of Victoria’s historic goldfi elds region, Clarkesdale Sanctuary is a beautiful patch of forest surrounded by a bucolic farming district and charming country towns. The 31-hectare ‘bird paddock’ was first annexed by local landholder, sheep farmer, avid birdwatcher and conservationist, Gordon Clarke in 1957, but the sanctuary and its adjoining reserves have expanded over time and now encompass 535 hectares, including crown land and private land titles covered by conservation covenants.

Clarke was a man ahead of his time, recognising that the decline in woodland birds he noticed in the 1950s was due to years of habitat clearance as a result of widespread mining and farming in the local area. He set out to replant and revegetate the land he purchased, permanently protect the remnant bush that remained and remove the woody weeds that threatened to overtake the native plants. He donated the bird paddock and an adjoining property called Grantiella to Bird Observation and Conservation Australia (now BirdLife Australia) in 1975 and 1980, respectively.

Now home to more than 140 feathered residents including powerful owls, Bassian thrush, bronze-winged pigeons, crimson rosellas and white goshawks, Clarkesdale offers all the peace and natural beauty of a bush camping trip and the charms of our delightful birdlife within cooee of the big smoke. 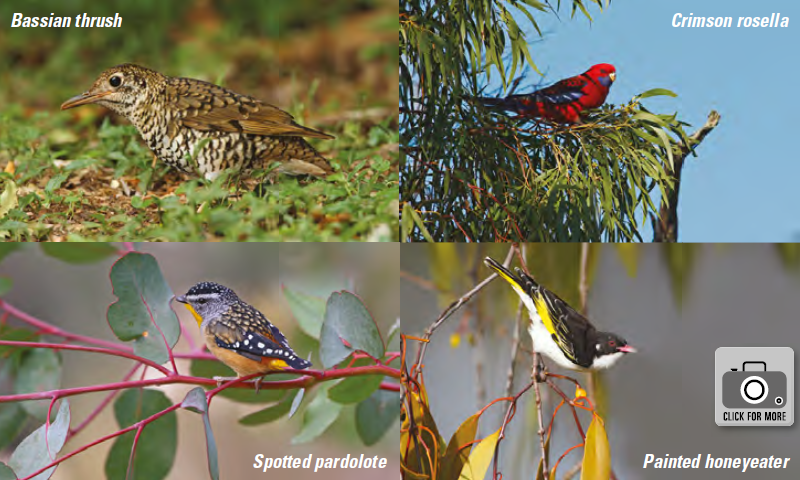 Relaxation is the order of the day, and the sanctuary is criss-crossed with walking trails and pleasant spots to stop and look for the local birdlife. Introductory birdwatching classes and wildflower identification courses are run on a regular basis.

Clarkesdale is open to visitors year round, but the spring and summer seasons are the best time to see the many birds that call the sanctuary home as they busily (and noisily) breed and nest.

Clarkesdale is two hours west of Melbourne and about 40 kilometres out of Ballarat.

Campers are welcome at the campground under the trees at the environment centre, and there are excellent facilities that cater for up to 10 unpowered sites.For more information go to www.birdlife.org.au/visitus/reserves/clarkesdale