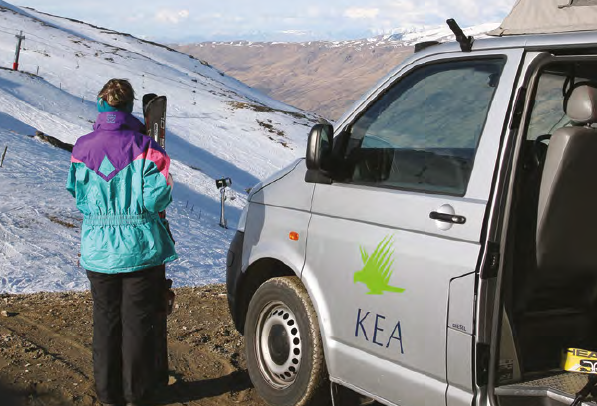 Just outside our window from where we are writing this column, the autumn leaves are fast disappearing after putting on their usual glorious display. That’s not unusual in southern parts of Australia and KEA Tracks has been lucky to be in different parts of the country to see some magnificent colours over the years.

For many motorhomers in the southern half of Oz, it’s often a signal to do one of two things: Either put the motorhome in mothballs for a few months or, as many do, head north for the winter. Being based in New Zealand as we are, we’d like to suggest an excellent alternative, particularly to the mothball strategy.

What prompted these particular thoughts was a Christmas/New Year trip last year to southern England and northern France. We noticed that the wet and cold weather didn’t seem to deter anyone from getting out and doing whatever they wanted to do. [Let’s face it – you’ve little alternative – Ed.] In particular, we noticed a considerable number of motorhomes travelling around or camped up in some very pleasant places. Clearly the weather, although a deterrent for some, wasn’t going to stop the rest from enjoying themselves.

During winter in New Zealand, we’ve seen more than a few of our rental motorhomes disappearing in the direction of Mt Ruapehu on the North Island or the  Queenstown/Wanaka area on the south. This suggests either some very foolhardy travellers or, more likely, those who have given their holiday travels some careful thought, packed their snowboards/skis and prepared accordingly.

Indeed, there is no reason to suggest that travel in the southern areas during the cooler months is not only a distinct possibility but there to enjoy. Generally speaking the winter months in Australia are not particularly harsh. Sure there are places like the mountain areas of Tasmania, Victoria and NSW where camping out is going to be cool but there are plenty of alternatives which are more than likely to be less busy in the off season and probably cheaper, too.

Anyone familiar with the latest motorhomes will realise just how well insulated and well equipped the average RV is.

Many modern windows are double glazed or have good quality curtains, which helps to keep the heat in and just about every current motorhome has at least a basic bathroom/ensuite facility. So there’s no need for a midnight dash to the loo in freezing weather.

In cold conditions motorhomes (like some of ours) that have a club lounge or dinette in the rear that is surrounded by windows are real winners. It’s quite easy to sit back in warm dry comfort and just take in the cold terrain outside; even better while enjoying a bowl of hot soup. One of the advantages of winter travel in a motorhome when compared to a caravan is that minimal time has to be spent doing outside chores and there’s certainly no need to get cold for hitching and unhitching purposes.

Diesel-fired heaters have made their presence felt over the last five years or so. Several good models are available in Australia and while many motorhomes are fitted with them from new, a retro fit (depending on the layout) usually isn’t too difficult.

For extended stays in areas where temperatures regularly go below freezing, it would be good to insulate any exposed water piping, which is mostly underneath a motorhome. Batteries (starter and house) can lose their capacity in prolonged cold conditions, so make sure they are in tiptop order. Anti-freeze in the radiator used to be a consideration. However, most modern engine coolants will cope but, again, if considering extended stays have a quick read though the vehicle’s handbook to make sure.

If driving above the snowline, then snow chains are going to be needed or at least for most people, carried. If you do have snow chains then make sure you practice fitting them in dry conditions. There’s nothing worse than figuring out how to fit snow chains in cold, wet slush. We know that most of our readers are never going to have that delight but the sometimes maligned front-wheel drive Fiat Ducato is a real winner here. [Thanks to those Euros playing in snow – Ed.] In terms of fitting chains, it’s one of the easiest vehicles because you can turn the wheel to get access to the back of the tyre and having chains simultaneously on driving and steering wheels is a bonus.

KEA Tracks realises that many of you are never going to be interested in visiting the alpine regions so won’t be fussing about items like snow chains. Our point is that there really is no reason for parking up for the winter in southern Australia. There are plenty of places to visit, experiences to be had and warm cafes to be found; all from the comfort of your motorhome.