Features Reviews Technology Cooking Destinations Stories Fishing
All the Fun of the Fair
Words and Images by: Chris Maher 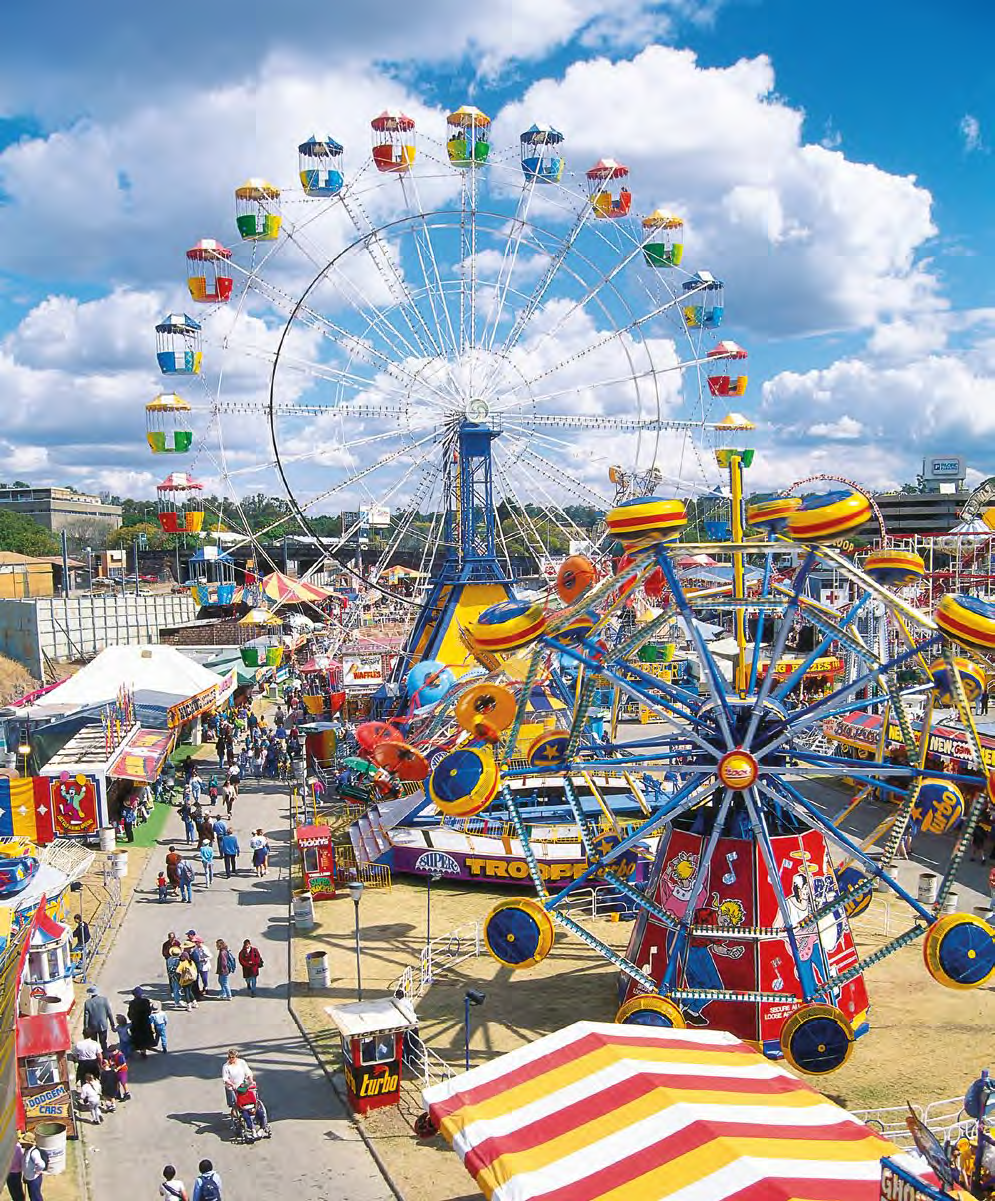 The Ekka is Queensland slang for ‘The Exhibition’. Tourism Qld

Most Australians have fond memories of going to the local ‘show’ as kids.

It’s not just the colour and sound, but by far the most memorable sense is smell: the fatty waft of Dagwood dogs frying in a van (they always smell a hundred times better than they actually taste): hot chips from the Tasmanian potato exhibit; pipe smoke and horse dung in the stables. And for days after, that crazy mix of smells that came from the sample bags: chocolate, sugar, plastic from the toys and printers ink from the comics.

That’s not to underestimate the sound: the endless hubbub of crowds moving in a flowing river of humanity; the shrieks of spruikers calling you to the laughing clowns or bust-a-balloon stands; the raucous pop music of the thrill rides; and roar of engines as the showground is taken over by the V8 racers.

Of course, the colour is pretty amazing too. In sideshow alley everything is hyperbright to attract attention, but there’s other visual treats too: the many different varieties of dogs in the canine pavilion; the art and cake decoration exhibits; and the explosive bursts of light at the fireworks show. 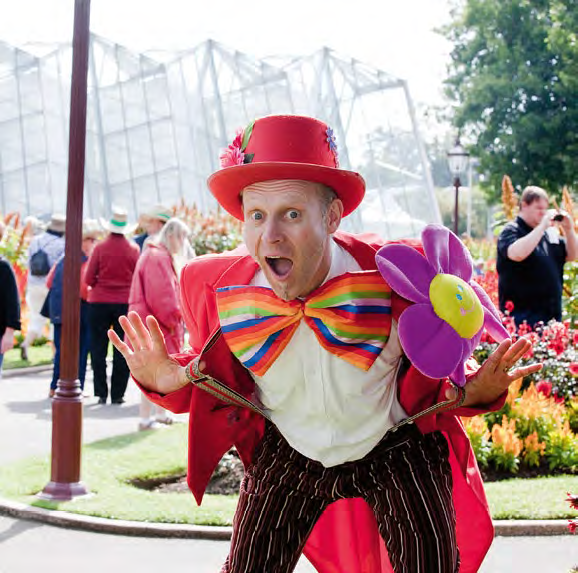 It’s also a tactile event. You literally rub shoulders with people from all parts of the region – or in the case of the big city show, the whole state. These shows are where the city meets the country. It’s often the first time a city kid will see a cow or a horse, and the first time someone from the county might see the more unusual fringe elements of the city as they parade up and down the avenues, enjoying the day with their friends.

It’s action all the way, from the unusual sports (polo, anyone? What about tentpegging?) to the perennial favourite of shows all around the country: the woodchop event. Who would have thought a man climbing a vertical log with an axe could be so entertaining? 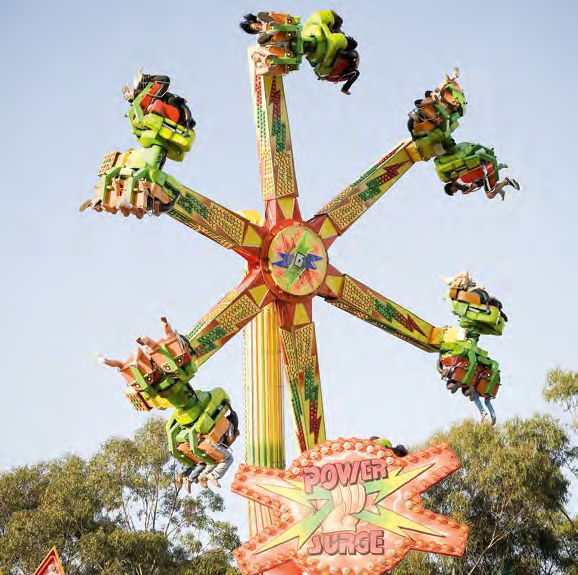 And let’s not forget taste. The Dagwood dogs might not taste as good as they smell, but there’s plenty of other fare to try. The food element has always been huge, from the best jams and honeys, to produce of all sorts such as premium oysters shucked fresh in the food hall, wines, cheeses and unusual treats like the hottest chillies in the country.

There are different types of shows and fairs all around the country. Each capital city and most towns have a show of some sort or the other. Then there are also  specialty shows, where the local town tries to garner a bit more interest from outside their region to bring in some tourists – and some tourist dollars. It’s a great way to fill the town with people and give the local economy a short term boost. 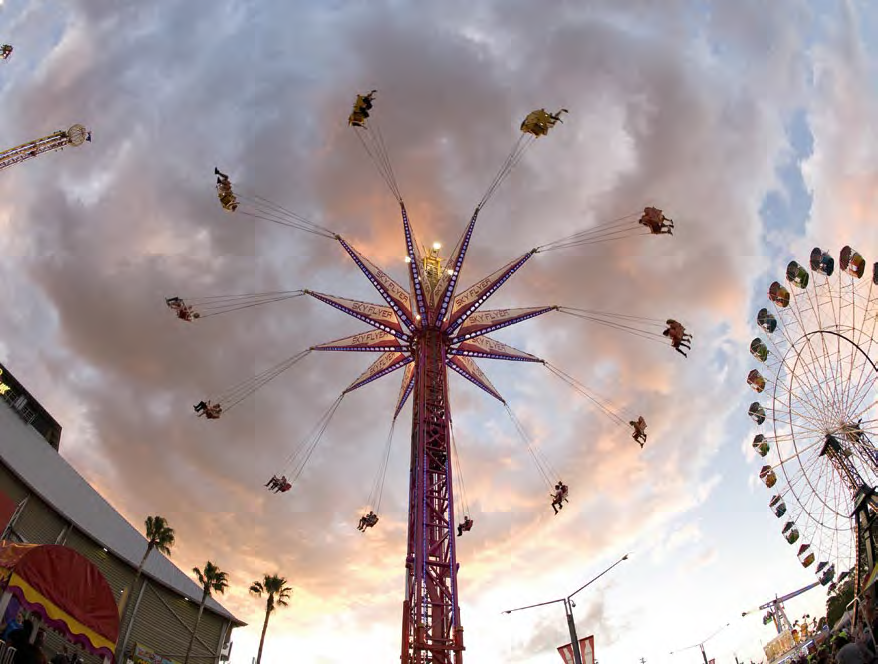 In Sydney, it’s never called its proper name of the Royal Agricultural Society Show. It’s always determined by the time of year – that wonderful time that’s neither summer nor winter, has religious significance but is better remembered by kids for chocolate and the Show.

First held in 1823, the Sydney Royal Easter Show is Australia’s largest annual event, attracting close to 900,000 people each year. It’s a celebration of Australian culture, from rural traditions to modern lifestyles, providing unique experiences for everyone. Each year the country and city join together to enjoy agricultural competitions, animal experiences, entertainment, carnival fun and much more.

It’s the perfect place to learn about agriculture and where food comes  from: and you can immerse yourself in the world of farming with hands-on, interactive activities.

As the largest agricultural show in the southern hemisphere, the Easter Show offers a variety of activities from the cute and cuddly to the sublime and the surreal. Showgoers can witness world-class competitions, blockbuster entertainment and the creative tapestries of the district exhibits. You can also get up-close and personal with animals both big and small and peruse the unique shopping opportunities of the commercial exhibits.

No day at the Easter Show is complete without a trip to the Showbag Pavilion, where you can try to choose from the 300 showbags. This year, the ever-popular (and cheap) Bertie Beetle showbag is back to celebrate its 50th anniversary.

The show moved to the new showgrounds at Homebush in 1998, and while it may still be developing its atmosphere, it’s much less crowded that the old Moore Park space, which has been leased to Fox Studios and is helping keep a whole different industry afloat.

It’s also easier to get to by public transport. Tickets can be bought at rail stations for show entry and train travel. The 191st Show will run from Thursday 21st March to Wednesday 3rd April 2013.

Of course, there are plenty of shows in other New South Wales towns. One unusual one is the Blue Mountains Swing Festival, where every February hundreds of people from all over the state converge in Leura dressed in 1920s gangster clothing. The highlight is the Charleston Challenge when they attempt to get as many people dancing the famous step as possible. This year 280 dancers smashed the world record, previously held by 250 dancers in Slovenia.

The next event on the capital cities circuit is the Darwin Show in July. It is celebrating its 62nd birthday this year, and has some unusual events you won’t find at other shows.

Things like pig racing, which has been a popular event in the past. Another is the Mouse Circus. The idea of the Mouse Circus goes way back to the days when tent shows travelled around and grounds  were abuzz with spruikers trying to coax patrons in to see their shows. Saul’s Mouse Mania was formed in 2012.

The Sandman is a show where Dennis Massoud brings his sand creations to life. Massoud (or Sandman as he is known) is a world champion sand sculptor. His unique style of sand sculpting keeps him in high demand. Massoud has been able to turn sand sculpting into a performing art. People swarm around and stare in amazement as fantastic creatures take shape in a matter of minutes. Massoud will also be holding sand sculpture workshops for the kids – teaching them how to build sandcastles.

The Royal Queensland Show in Brisbane is affectionately known as the Ekka. It will be held this year on August 8 to 17.

The Show has a long history, starting back in 1875 when a group of colonists met at the Brisbane Town Hall to form the National Agricultural and Industrial Association of Queensland. One aspect of the association’s charter was to provide a unique opportunity for country and urban residents to come together in a celebration of Queensland lifestyle.

The First Show was held at Bowen Park in January 1876. A public holiday was declared and 17,000 people attended the opening day – a colossal success, given that the total population of Brisbane at the time was only 22,000. The Show became ‘Royal’ in 1921when King George V agreed it could; and then became shortened to Ekka as a truncation of ‘Exhibition’.

Today, the Ekka runs for ten days and attracts about half a million visitors each August.

There are a number of capital city shows in spring, starting with the Royal Adelaide Show in September. This year it will be held from September 6 to 14.

One of the highlights at this year’s Royal Adelaide Show will be the new Technology Centre. Pete the Gadget Guy is the Adelaide Show’s resident Technology Ambassador and he will be providing guided tours of the Tech Centre and providing short presentations that preview the latest technologies.

Novatech Symphony of Lights is a custom designed light show spectacular that combines the latest in entertainment lighting technologies with a perfectly synchronised soundtrack produced by one of Australia’s leading conductors.

In an exclusive, world-first premiere, this one-of-a-kind show boasts a 50 piece ‘orchestra of light’ performing a highly theatrical, breathtaking performance.

South Australia also hosts the Barossa Vintage Festival from March 30 to April 4: the largest and longest running wine tourism festival in Australia. From food and wine, arts and crafts, to music and history – there is something to entertain, please and inspire from the more than 100 events that make up the Festival.

The Barons of Barossa float at the vintage festival. Tourism SA

Moomba is possibly the biggest community event in Melbourne. It is celebrated during the Labour Day long weekend (over four days, from Friday to the second Monday in March). This year it will be held on March 8 to 11.

Moomba is culturally important to Melbourne, having been celebrated since 1955 and regularly attracts up to a million people with a record attendance of 1.7 million set in 1996. Traditional events include the Moomba Parade, crowning of Moomba monarchs, fireworks displays, carnivals in the gardens along the river, river activities including watersports, water floats, the birdman rally, and live music and bands. This year the music will include Bob Evans, Kasey Chambers, the Stars of the Cook Islands and Mark Seymour, amongst others.

This year’s Royal Melbourne Show will be held from September 21 till October 2 at the Melbourne Showgrounds. This will be the 158th event.

There are plenty of other Victorian shows in spring as well, including the Camperdown Aussie Farmers Annual Show, on the Great Ocean Road at Camperdown on October 12; the Nhill Show in the Grampians town of Nhill on October 17; the Royal Geelong Show on the Great Ocean Road at East Geelong from October 17-20; the Motorclassica in Carlton from October 25-27; the Myrtleford and District Agricultural Pastoral Show in the high country town of Myrtleford on October 26; and the Dandenong Show on November 9 and 10.

There are also two Victorian shows in March. The Ballarat Begonia Festival is held earlier in the year, over the Labour Day long weekend from Saturday 9 to Monday 11 March at the Ballarat Botanical Gardens and Lake Wendouree foreshore.

The 2013 Bendigo Easter Festival runs from March 31 to April 1, when Bendigo comes alive with activities to attract all age groups. Good Friday on March 29 features Hazeldene’s Family Day and has an Easter egg hunt and interactive animal exhibits where you can pet a pig or cuddle a goat. You can also walk along Bridge Road through  Dai Gum San Chinese Precinct to enjoy the fun of an arts and crafts market. The festivities continue until Easter Sunday with the Gala Parade

The Perth Royal Show is Perth’s biggest community event attracting more than 400,000 visitors from the city and country each year. Its rich history spans 170 years, and the Show is an iconic social and cultural event which showcases WA agriculture, small business and entertainment. 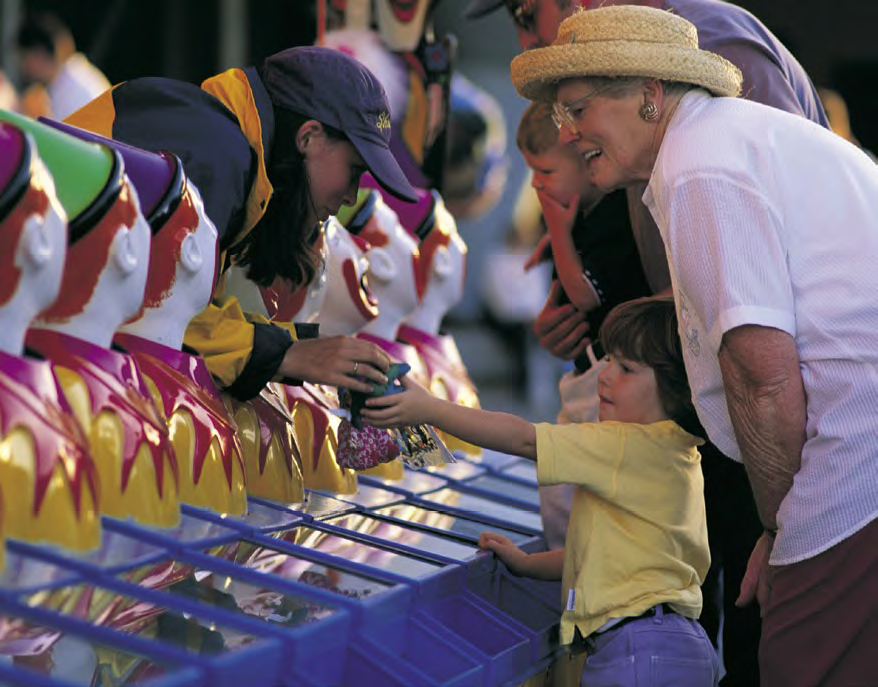 It's held this year from September 28 to October 5.  If you’ve enjoyed some WA excursions and taken photos, it’s worth thinking about the new contest being run called Picture Perfect Western Australia. Simply go to www.westernaustralia.com/1001 and upload your favourite image of WA before 2pm Western Standard Time on 28 March, 2013. 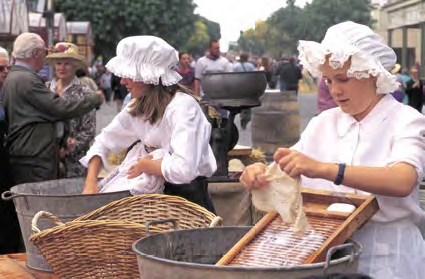 History is a big part of the Barossa Vintage Festival. Tourism SA

The best 1001 shots will be selected, and you could be in with a chance to win one of five amazing holidays in the state. 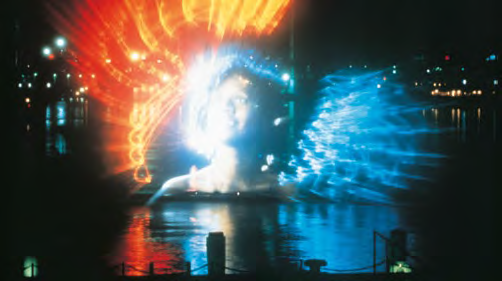 A light show on the Yarra River as part of the Moomba Festival. Tourism Victoria

The Royal Hobart Show is held on October 23 to 26. This year the Show will feature the FMX Freestyle Moto X Team. Watch two of Australia’s leading riders performing tricks such as the cliff hanger, holy grab, back flip and more.

Then we start the season all over again at the end of summer, with the Royal Canberra Show on February 22-24. 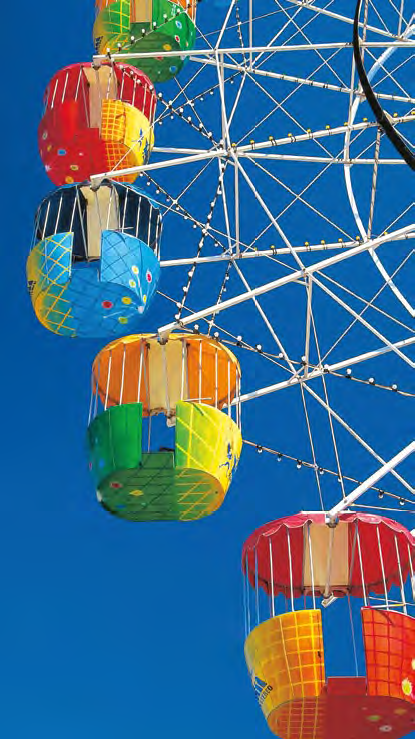 Ferris wheels are fun for all ages. Tourism Qld