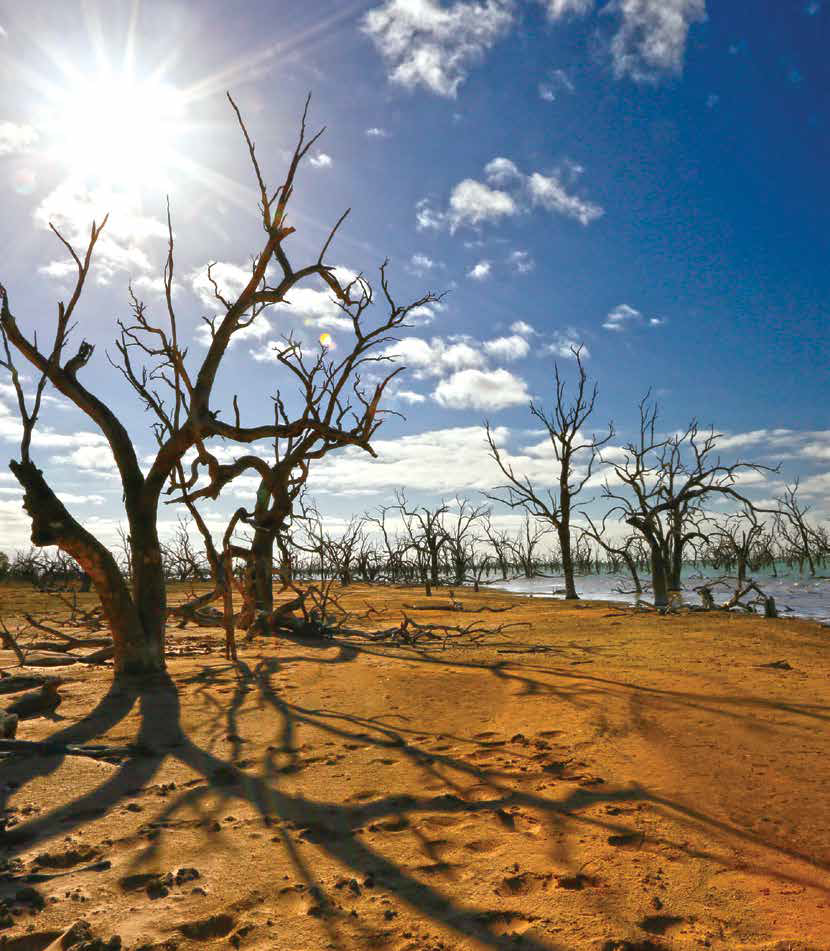 On the shore of Lake Pamamaroo near Menindee

The vast New South Wales outback covers more than half a million square kilometres. It’s big country under a wide blue sky, a land of austere natural beauty, rich in human history. Across its dusty desert expanse snakes the most famous of our outback waterways, the Darling River.

The river draws travellers in numbers that make tourism the third largest industry in the western catchment. Many travellers are creating their own frontier experience on a Darling River Run – a 750km pilgrimage through coolabahs and red gums from Bourke to Wentworth.

The Darling catchment is an ancient, weathered landscape in which the main channel formed about 140 million years ago. The river rises in the Great Dividing Range in Queensland and meanders south-west for 2,740km to join the Murray at Wentworth on the Victoria border. It is joined by more than forty tributaries along the way,  although some, like the Paroo and Warrego, don’t always connect in times of drought. The arid riverine plains receive less than 250mm of rain annually and in prolonged drought the Darling can dry up totally, which it has done many times in recorded history. 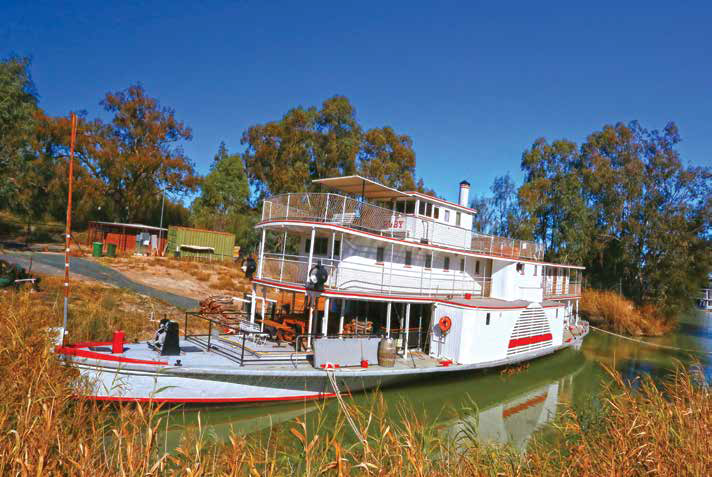 PEOPLE OF THE RIVER

Aboriginal people lived in the Darling River system from at least 50,000 years ago. These are the traditional lands of several Indigenous nations, the largest being the Barkindji, who are known  as ‘the people of the river’. They retain strong connections to their country and play an increasing role in its management. In 1829, Charles Sturt and Hamilton Hume explored the Darling near current day Bourke and named the river after the then NSW Governor. Subsequent expeditions by Sturt, Thomas Mitchell and Edward Eyre revealed the river’s lower reaches around Menindee and its confluence with the Murray at Wentworth.

Settlement along the Darling began during the 1840s as huge pastoral leases were taken up for grazing sheep and cattle. After William Randall and Francis Cadell pioneered paddle steaming from South Australia to Bourke in 1859, the river became a highway on which the ports of Bourke, Wilcannia and Wentworth served burgeoning wool empires. At the same time, militant shearers clashed with landowners, forging unionism and the genesis of the Labor Party on the eve of  Federation. However, the river’s importance as a transport link gradually waned as drought devastated stations and reduced river flow. Paddle steamers were replaced by bullock teams and camel trains, then roads and railways. The last paddle steamer ran in 1931. 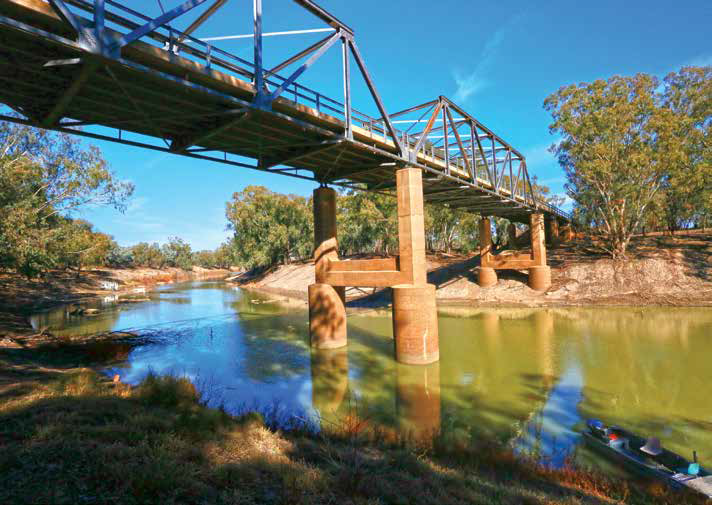 Bridge over the Darling at Louth

Bourke is the ‘Gateway to the NSW Outback’ and the northern start of the Darling River Run. Straddling the Darling and several major highways, 800km northwest of Sydney, it is also the administrative and service centre for a shire spanning 43,000 sq km that is largely engaged in grazing and agriculture. The Back O’ Bourke Exhibition Centre is an impressive world-class museum with exhibitions that tell the remarkable story of Bourke and the Outback. Mud maps from the information desk will guide you on a circuit of the town’s key attractions and heritage buildings that reflect its once prosperous history. You can cruise on the Darling (water level permitting) aboard the PV Jandra. This modern replica of a paddle steamer that once plied the river trade operates 6 days a week from a dock adjacent to Kidman’s Camp Country Resort in North Bourke.

South of Bourke, the tiny village of Louth was described by Henry Lawson as “a place that loved a drink, a party and a punt”. Louth was established on the Darling in 1859 to cater to the passing riverboat trade and Cobb & Co  coaches crossing to the western districts. Today, Shindies Inn serves Louth as a pub, cafe, general store and folk museum, while the post office has been beautifully restored as a bed and breakfast. In early August, the sleepy hamlet comes to life when the local turf club hosts the Louth Cup meeting, which attracts thousands of punters from near and far.

Ninety kilometres downstream is Tilpa (population 9), which was an important port for paddle steamers and a waypoint for overlanding stock from the Namoi districts to Adelaide. The Tilpa Hotel is a bush classic in timber and corrugated iron, with internal walls and ceiling covered with inscriptions by patrons who make a donation to the Royal Flying Doctor Service for the privilege. Tilpa also claims the shortest heritage trail in Australia (just two signs across the main street from each other) and the country’s only cemetery  with no ‘residents’. From Tilpa, the west side of the river is the more travelled route to Wilcannia, 145km away. Crossing the Tilpa bridge and continuing along the eastern bank is slightly longer and passes close to the Wilga campground in the Paroo-Darling National Park. (After heavy rain in May 2019, the Central Darling Shire Council closed the eastern road until further notice.) 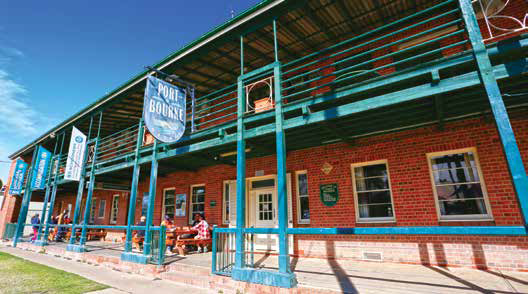 The Port of Bourke Hotel near the historic wharf precinct

QUEEN OF THE WEST

Wilcannia stands on the west bank of the Darling, at the junction of two major highways, the east-west Barrier and the north-south Cobb. The town is a major transport hub and service centre for the Central Darling Shire spanning 53,500 sq km. It shimmers on the edge of the NSW desert, where scorching summers can produce temperatures approaching 50°C. During the 1901-02 drought the river did not flow here for 364 days, a record that still stands. After settlement by pastoralists in the 1850s, Wilcannia rapidly grew into  the Darling’s third largest port. At its peak in the late-1880s, Wilcannia was the “Queen of the West” with a grand history that still resonates in its fine heritage buildings.

After Wilcannia, the ‘Run’ brings the traveller into the Lower Darling region, where the river traverses an almost featureless floodplain before debouching into the ephemeral Menindee Lakes. These natural features were modified in the 1960s to create the Menindee Lakes Water Storage System – with a capacity 3.5 times greater than Sydney Harbour – to manage floods and distribute water for agriculture and town consumption. With the construction of the Main Weir, the number of major lakes has been reduced to four – Wetherell, Pamamaroo (with its ghostly forest of submerged trees), Menindee (dry for the past five years) and Cawndilla – which provide important habitats for more than 30 species of waterbirds and 21 of native fish. 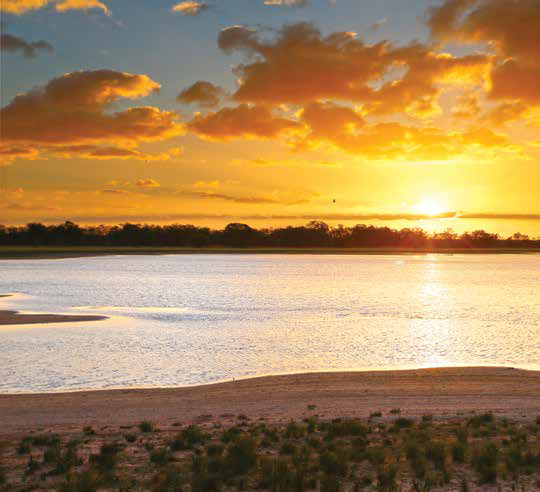 Sunset over Copi Hollow near Menindee

Menindee was the first town established on the Darling and is the oldest European settlement in western NSW. The town holds a special place in Australian history through its association with the ill-fated explorers Burke and Wills, who established a depot camp now marked by a sign and cairn near the Main Weir. While in Menindee, Burke stayed at Maiden’s Hotel, which was considered the second oldest hotel in NSW until it burnt down in 1999 and was replaced by the present building.

Menindee stands at the threshold of the Kinchega National Park. Once part of the huge Kinchega Station, the park covers 440 sq km with a 62km frontage along the Darling River, and offers bush camping and heritage trails. Camping is also available at the picturesque Copi Hollow Caravan Park, 15km west of the town.

Below Menindee, the river forms two channels. The main channel flows south-east for 240km,  through Pooncarie, to join the Murray River at Wentworth; the Great Darling Anabranch changed course 11,000 years ago and veers 460km south-west to its junction with the Murray west of Wentworth. 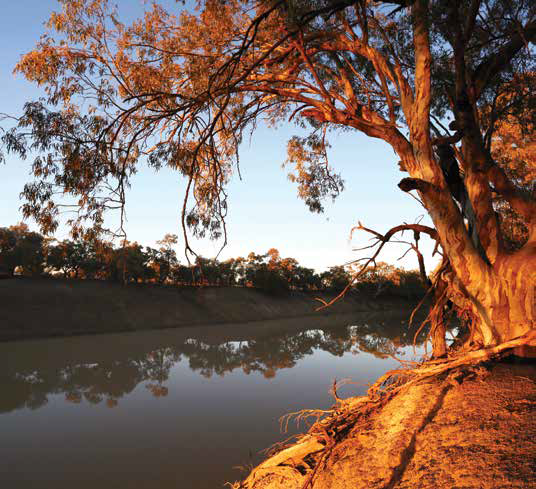 The sleepy village of Pooncarie was once a thriving port serving paddle steamers laden with wool bound for South Australia and a service hub for the huge pastoral stations between Wilcannia and Wentworth. Today, the tiny hamlet boasts the 1876-era Telegraph Hotel, a post office, general store, and the Old Wharf Site Cafe and craft gallery overlooking the river. In October, the local turf club hosts the Pooncarie Cup that attracts more than 1,500 race lovers.

The Darling River Run ends 115km south of Pooncarie at the historic town of Wentworth, at the confluence of the Darling and the mighty River Murray. The junction was an important meeting place for Aboriginal tribes and a significant waypoint for European explorers  and the pioneers who followed them. A riverside monument pays tribute to Joseph Hawdon and Charles Bonney, who crossed the river here while overlanding cattle from Albury to Adelaide in 1838 and, two months later, Edward Eyre. 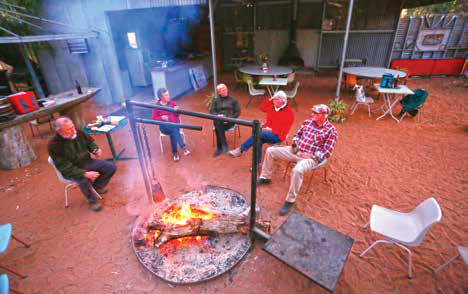 A cheery fire at happy hour on Bindara Station

The town was first settled in the 1850s and soon proved an ideal location to take advantage of the steamer trade along the two rivers. By the 1880s, Wentworth was the third busiest port in NSW after Sydney and Newcastle. Today, things are much quieter on the river, where houseboats and leisure craft have replaced the paddleboats. Yet Wentworth retains much of the charm of the river’s ‘golden age’, like the faithful replica of the 1860 wharf and the beautifully restored paddle steamer ‘Ruby’, which operates as a cruise vessel. In all, Wentworth is the perfect way to wrap up an unforgettable journey down one of Australia’s great outback rivers.

• The Darling River rises in the Great Dividing Range in Queensland and flows 2,740km to join the River Murray at Wentworth on the Victoria border.

• Farm stay accommodation and camping (powered anwd unpowered) with varying levels of amenities are offered at Trilby, Kallara and Bindara Stations. Rates vary according to level of accommodation/amenities.