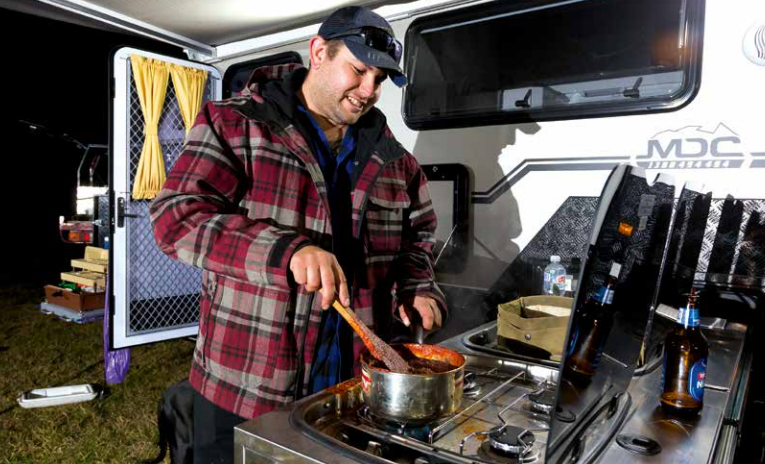 I believe camp cooking is one of the best parts about the whole camping experience. Yep, sitting around the fire, tucking into a nice warm meal is all part of the fun. In fact, I’d go as far as saying it’s often the most memorable part of a trip. But it needn’t be expensive. To prove our point, we’ve thrown out a challenge to the Adventures Group crew to come up with the tastiest camp feeds imaginable for less than $10. Sounds easy enough, right? Well, there’s a catch – it’s got to feed four people. We’ll be sharing the tantalising results over the next few editions of The Wanderer.

You’d be amazed at how much money you can save by shopping smart. Have a think about how you can make the most out of the ingredients you buy. Can you make several different dishes out of the stuff you just bought? Or can the meal you plan on making form the base of other meals? For example, I’ll generally buy a good lump of beef mince to make a real crowd favourite – spaghetti! But I will typically cook two or three times more than we need for the one night, and use it later on. Sometimes it winds up on toast, other times it goes into a tasty camp pie. It makes a great topping for those loaded potatoes (with melted cheese of course – yum!) or even stuffed capsicums. Stretch it out a little further by adding in some extra veggies like mushrooms, carrots and peas, then pour in a tin or two of spicy sauce for a little extra kick, along with a few kidney beans if you want a great chili con carne to keep you warm!

Will serve: Two to four, depending on toppings

Loaded spuds are always a guaranteed hit, and they’re super easy to make when you’re camping too. Simply prick your new potatoes lightly with a fork a few times, rub with oil or butter and sprinkle with salt. Then wrap them in foil and pop them in your camp oven, or even straight in the coals. Cooking time will vary, but make sure you turn them regularly to avoid burning them. Once they’re cooked, cut twice across the middle of the spud. You can scoop out a chunk of the flesh or just open the potatoes out and fill them up with your choice of toppings. Baked beans work well, so does spaghetti sauce (see Stretch Your Dollar Further), bacon, chopped tomato and avocado. Sprinkle plenty of shredded cheese over the top and place them in a camp oven with coals on the top, just long enough to melt the cheese. Talk about yum, rich, tasty and cheap! – David Cook.

Remove the meat and skin from the bones and chop coarsely. Add the meat to an oiled hot pan and brown. Add the onion and cook until soft and translucent. Pour over 4tbs of hoisin sauce and combine well with the meat and onion.

Spoon mixture on to lettuce and serve.

Garnish with corn and serve it up! – Anthony McDonald.