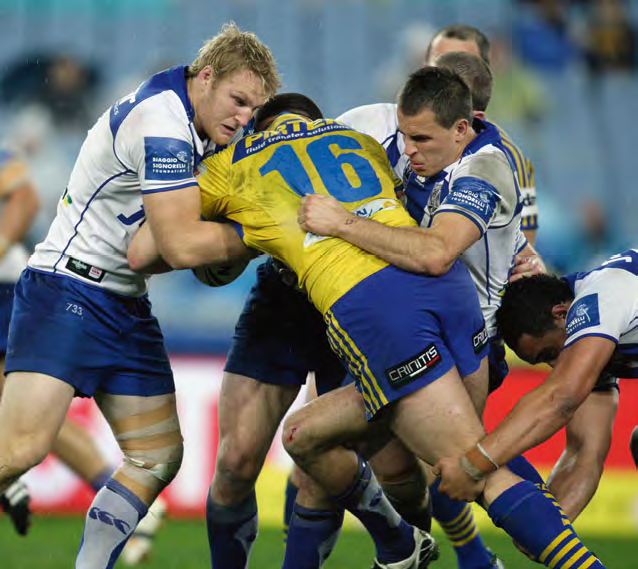 Aiden Tolman and Josh Reynolds display the vigour needed in finals football. The ANZ stadium will host the biggest matches, including the grand final.

The whole world knows we love our sport in Australia. From the grassroots to the big events, we get out and play, coach and watch it in droves. You can argue what are the biggest sporting events in Australia, based on your own point of view, your favourite sport and probably where you live.

Some say the Melbourne Cup – after all, it stops the nation (though not always the Reserve Bank) on the first Tuesday in November.

Others say test cricket; maybe the Boxing Day Test at the Melbourne Cricket Ground, but it could be any test depending on how the balance of the series is playing out. That’s the dramatic thing about a Test Series – 25 days of play and it could all come down to the last ball.

And of course there’s tennis, surfing, swimming, lifesaving championships, sailing and all the summer sports that are a joy to watch even if you don’t know who’s actually competing.

But of all the times of the year, late winter and early spring must be amongst the busiest for big sporting events. You’ve got football finals potentially in five states, as well as a host of other sports such as rodeo, cycling and motor sport.

But undoubtedly, football is the big one.

Some of the sports we mention in this article are participatory – if you’re good enough; for example, the marathon. But mostly we’re looking at the sports to watch and get excited about.

Is there anything more thrilling than being part of crowd of 60,000 or maybe even 100,000 people cheering for your team; yelling in disappointment (some people might react more strongly) or screaming deliriously when the winning point is scored?

One of the tremendous things about sporting events in Australia – even the very biggest ones – is that they are generally safe and enjoyable. There is rarely serious trouble – perhaps a few drunks causing trouble on a Friday night – but nothing to stop the largely family-friendly atmosphere of the spectacle.

The two most popular spectator codes of football in Australia are Australian rules and rugby league. There are others of course – soccer (called by its international name, futbol or football by aficionados), and rugby union.

The name football is used by all codes interchangeably in Australia, and that’s the way it should be. The games are called football because they are played on foot, not necessarily with the feet. The term came about basically to distinguish games played on foot from those played on horseback. Quite simply, peasants played games on foot because they couldn’t afford  horses. Polo and the like were played by the gentry. (The only time the two might intersect was if a lord rode past and clobbered a peasant with his riding crop.)+

In 19th century England, the forms of football were codified, and an association formed to administer the rules of the main form of football. Hence: Association Football.

In New South Wales and Queensland, football or ‘footy’ tends to mean rugby league. In the other states it generally refers to Aussie rules. In many parts of the country, association football is called by its abbreviation, soccer – although there has been a push of late to make it the only form of football to be called football.

What that means for the traveller is you can see finals action of both sports in either capital, as well as a high likelihood of seeing NRL finals action in Queensland  and AFL finals in Perth (or Freemantle at least) and Adelaide. Other cities outside the state capitals may also participate, including Newcastle, Canberra, Geelong, Townsville and the Gold Coast, as well as Auckland. 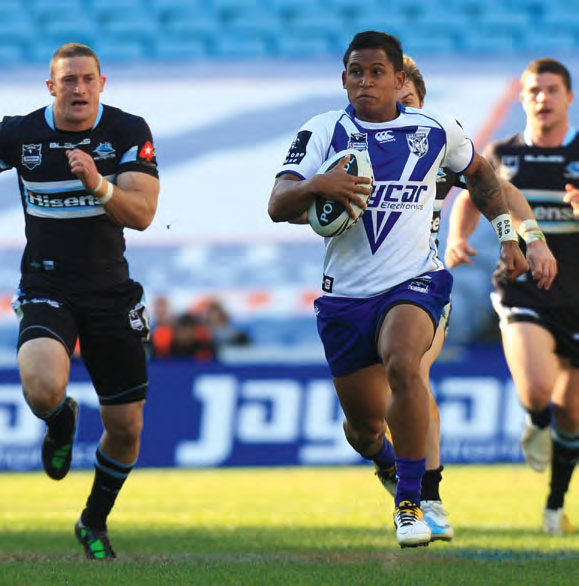 Benny Barba on the rampage – he is expected to play a big part in the NRL finals.

But the big two locations are Sydney and Melbourne, because that’s where the grand finals are played.

Melbourne has always boasted better crowds for their version of football than Sydney – going back to the 121,696 people who turned up at the MCG for the VFL grand final between Carlton and Collingwood in 1970. 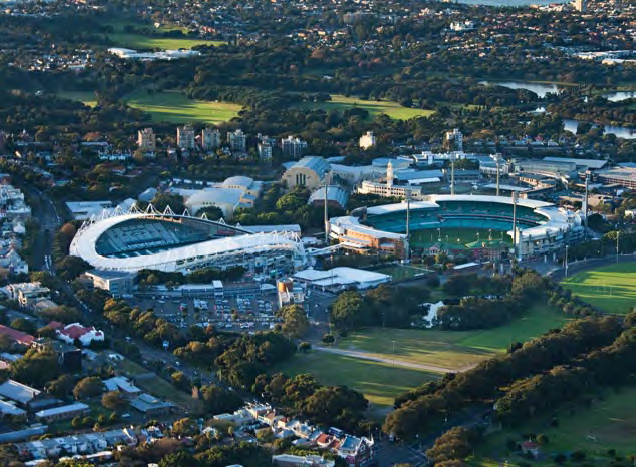 The Sydney Cricket Ground and Alliance Stadium, potentially home to rugby league and AFL semi finals, as well as the US Major League opening baseball rounds

But Sydney smashed the world rugby league record in 2001 when 107,999 came to the brand new Stadium Australia (now called ANZ stadium) to see the Dragons cede their lead to Melbourne – and usher in a new era for the sport. 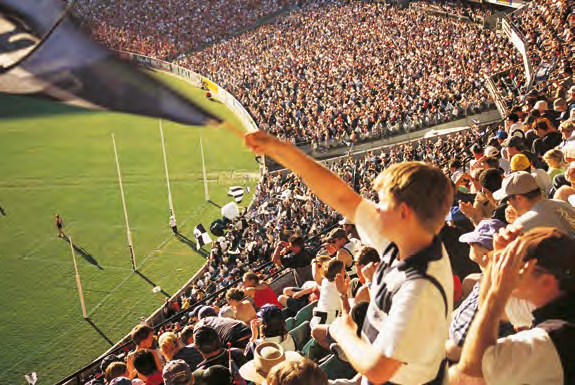 Enjoying finals fever at the MCG. The AFL Grand Final will be held here as well as a number of other finals. Tourism Victoria

Whether you plan to attend either the Sydney or Melbourne grand finals, you’ll need to get tickets as soon as they go on sale to be sure of a seat. They usually sell out fast. Minor finals might not sell out but the problem is you don’t necessarily know where they’re going to be held, as the combatants and venue will depend on the results of different matches, although Sydney and Melbourne are likely to host at least a couple.

If you’re lucky enough to get a seat (even in the nose-bleed sections) you will experience not only some of the finest athletes in the country competing in a highly meaningful – and therefore aggressively contested – match, but could also be part of history. Especially if the underdog triumphs!

The AFL final series starts on September 6 and concludes with the grand final on the afternoon of September 28 at the MCG. 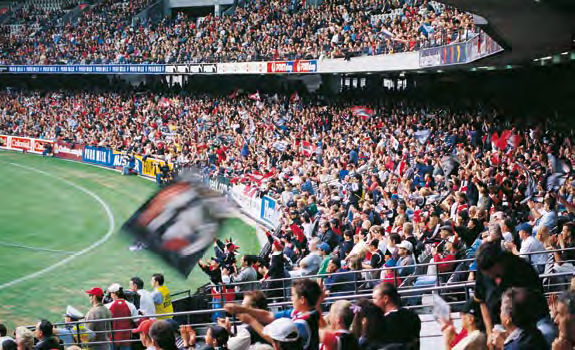 The big crowds might roar – but they’re family friendly as well. Tourism Victoria

The NRL series starts on September 12 and concludes with the grand final on the night of October 6 at ANZ Stadium.

On top of all that is the Super Rugby Final on August 3. However, as the Australian teams compete with South African and New Zealand clubs, it’s unlikely the final will be held here – but you never know!

Rodeo is not as popular in total spectator numbers as football, but it’s arguably more demanding, exciting and even a more macho pursuit.

Mount Isa’s famous rodeo will be held on the weekend of August 9 to 11, with the biggest stars on the Australian rodeo circuit expected to lure more than 26,000 visitors to the biggest rodeo in the Southern Hemisphere.

This year is the 55th annual rodeo at Mt Isa, and it’s also the city’s 90th anniversary.

Mount Isa has a purpose-built arena and the atmosphere builds to the last event – the Open Bull Ride Finals on  Sunday afternoon – where the best of the best cowboys try to make an eight second ride on bulls weighing up to one tonne.

It has the richest prizes on the Australian circuit, with competitors vying for more than $200,000 in cash and buckles.

The action kicks off with the Mailman Express Sprint Horse Race on Thursday, August 8, with the rodeo competition, family Mardi Gras parade and opening  ceremony the following day (Friday, August 9). The weekend focus is on rodeo competitions and live music, leading up to the Sunday finals. 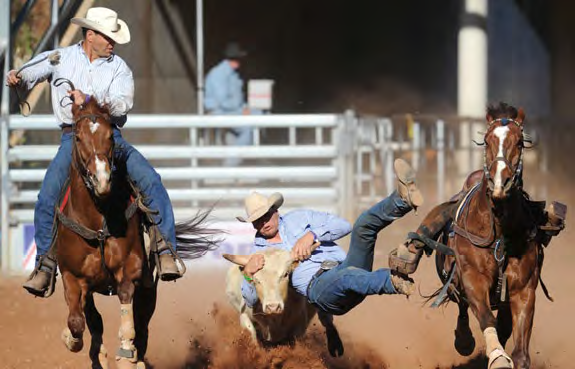 You can stay close to the action at Swag City. This is a designated onsite camping area for visitors attending the three days of the rodeo, catering for campervans, caravans, camper trailers, tents and those who want to throw down a swag and camp under the stars.

Facilities include showers and toilets. A bush poets’ breakfast on both days of the weekend (August 10 and 11) is always popular, with cooked breakfasts available for purchase while listening to some talented bush poets.

There are also a number of sporty  options for you to participate in yourself. These include such way out events as the Great Pyramid Race on August 10 at Gordonvale, 24 kilometres south of Cairns.

It started, as many great events do, as a dare in a pub: betting who would be fastest up and down nearby Walsh’s Pyramid, the world’s tallest isolated peak.

The event line-up includes the Great Pyramid Race, five-kilometre fun run and cycling. The spectacular scenery by itself is worth travelling for, and the entertainment either side of the great race is worth staying for.

The ski season is still going in August, and on the 24th the Kangaroo Hoppet is held at Falls Creek. This is Australia’s premier long distance cross country ski race. It provides a unique opportunity to ski the Bogong High Plains of Victoria’s Alpine National Park on a well groomed trail with six food stations.

The Freycinet Lodge Challenge will be held in Tasmania on the weekend of October 6 and 7. It is a multi-day , multi-genre adventure outdoor event, encompassing circuit runs, kayaking, road biking and mountain biking. Over the two days, competitors will take in some of the best known features of the East Coast of Tasmania, from the rugged grandeur of The Hazards to the striking surrounds of Wineglass Bay.

A few other events

The 2013 Australian Short Course Swimming Championships will be held from August 23 to 25 at the Sydney Olympic Park Aquatic Centre. You can see  all the stars of Australian swimming speed along the short-form (25m) pool. 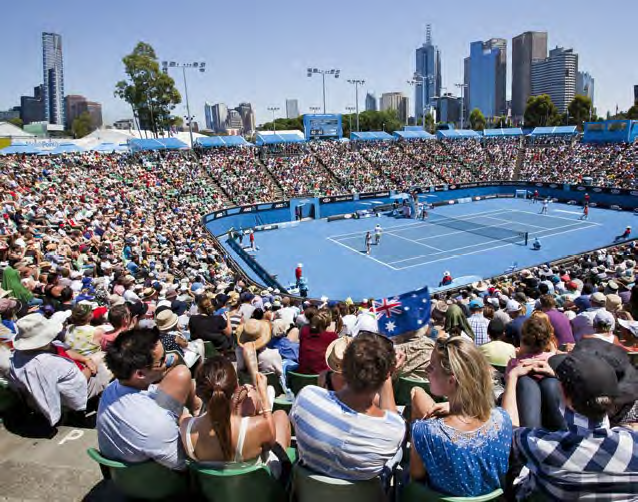 Enjoying the sun at the Australian Open. Tourism Victoria

The famous Birdsville Cup Races are held in Birdsville on September 6-7, and fills this outback town to capacity. Every year, a 6,000 strong cast of spectators, owners, trainers and jockeys saddle up and party at these iconic races.

From October 18-20, don’t forget the MotoGP. It’s an unforgettable experience with bike enthusiasts from all walks of life coming together to enjoy worldclass racing at the home of Australian motorcycle racing, Phillip Island. 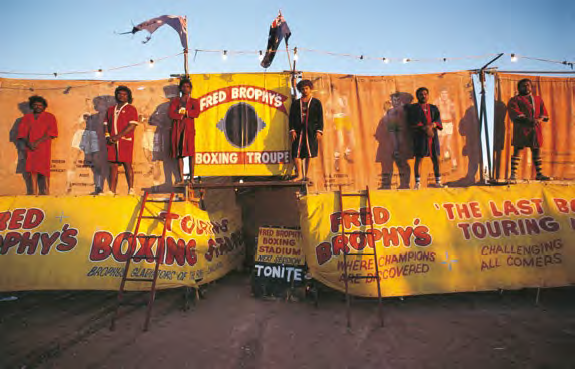 Fred Brophy’s famous boxing troupe will be entertaining crowds and challenging those game enough to step into the ring at the Mount Isa Rodeo. Tourism Qld 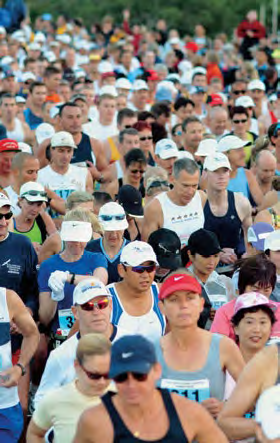 Marathons attract a lot of participants as well as spectators. This is from the March Gold Coast Marathon. Tourism Qld

From October 19-27 the Crocodile Trophy is contested. Brave north Queensland heat and join the hordes of spectators who watch as buff blokes put their bodies on the line riding from Cairns to Cooktown in nine days. The crowd goes wild as fierce competitors take on corrugated fire trails and unforgiving rocky landscape for 92-kilometers. This year’s Crocodile Trophy will see internationally  renowned cyclists as well as some of Australia’s most determined and skilled mountain bikers put their pedal to the metal.

Often, world famous teams come to Australia to demonstrate their skills and promote both their sport and brand to the sports-mad Australian public.

For example, an upcoming National Football League match (NFL, American football or gridiron) is planned. Manchester United only recently came to play against a team of A-League stars in Sydney, and Liverpool FC played against Melbourne Victory.

The next such event is the opening of the US Major League Baseball season with a pair of matches at the Sydney Cricket Ground (SCG).

Then matches will be played between the Arizona Diamondbacks and Los Angeles Dodgers.

Australia is a minor baseballing nation but is seen as fertile territory for expansion. What is likely to attract spectators to the SCG is the atmosphere, not just the game itself: the popcorn, hotdogs, organ music and razzamatazz for which baseball is famous.

The matches will be played on March 22 and 23, 2014. The event will literally transform the famous SCG – the oldest cricket venue in the county – by installing a pitcher’s mound on the hallowed turf.

But traditionalists should not become overly concerned – the pitch will remain inviolate.

It has been 100 years since the last Major League baseball game was held in Australia. 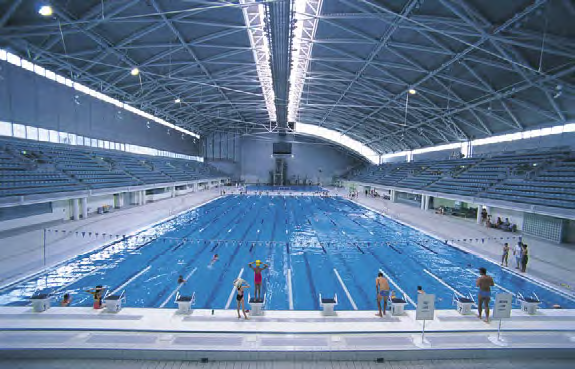