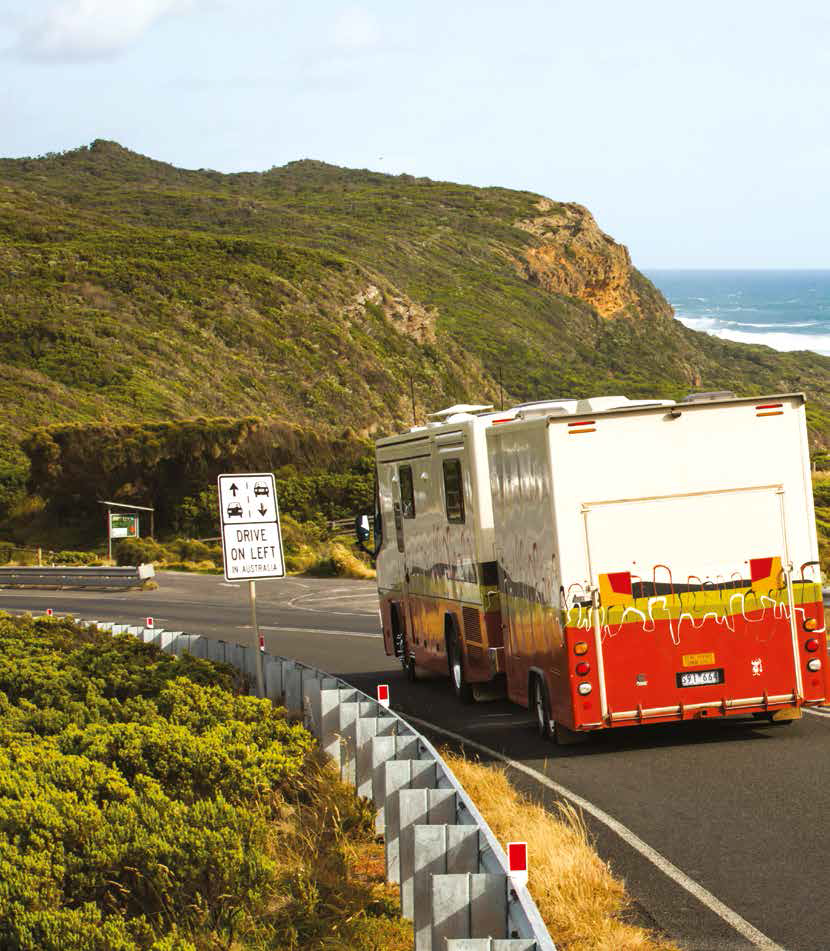 In a world of acronyms such as GVM, GCM, ATM, GTM and terms from ADR62/01 to Tare and Towing Ratio, where engineers calculate and certify compliance, the bottom line is that when it comes to towing and couplings, the onus is always on the driver.

And while it may seem a simple process to get a 50mm towball fitted to your vehicle, there’s a whole industry built around one of Australia’s most popular past-times, the road trip where towing the van, the boat, or the spare vehicle behind  the 4WD or RV is almost mandatory. This is one area where DIY is best avoided in almost every instance. 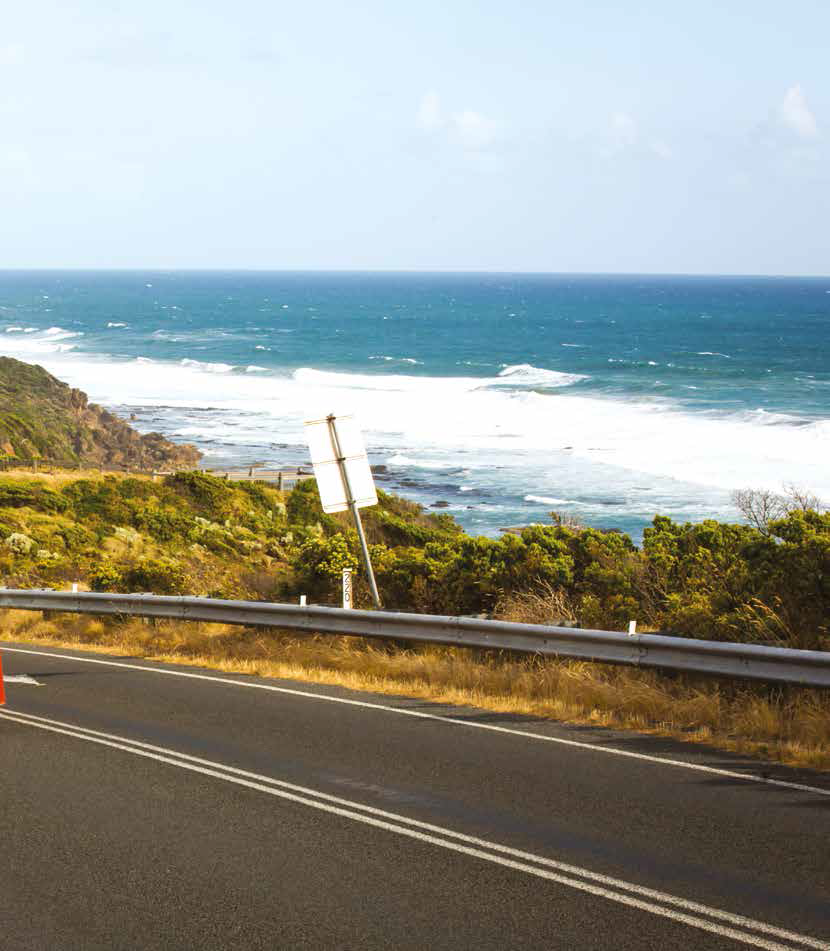 If you don’t know your kerb weight, what the 3.5:1 ratio is all about, when you need brakes fitted on a trailer or what types of vehicle can be towed on an A-frame, ignorance is no excuse says the law. The good news is that advice is readily available from government regulators, state motoring organisations, caravan, boating and the RV industry, as well as trailer and towbar specialists.

States have different speed limits: 10kph shared zones; 25kph school zones in South Australia only, but 40kph school and pedestrian everywhere else; 50 or 60kph in built-up areas, but a range of top speeds from 100 to 110kph, and even 130kph in the Northern Territory.

But when towing, differences start to emerge. New South Wales specifies a maximum 100kph if your combined weight exceeds 4500kg, while Tasmania’s limit  is 90kph. And it does not matter where your rig was registered, local rules apply; however, there is national agreement on one thing - Australian Design Rule 62/01 Mechanical Connections Between Vehicles. It’s full of riveting information, but if your eyes glaze over at the thought of horizontal alternating forces or longitudinal median planes, never fear. We sought advice from towbar expert, Jason Gow, Managing Director, Custom Towbars and Trailers and Kebar Manufacturing Pty Ltd in Queensland. 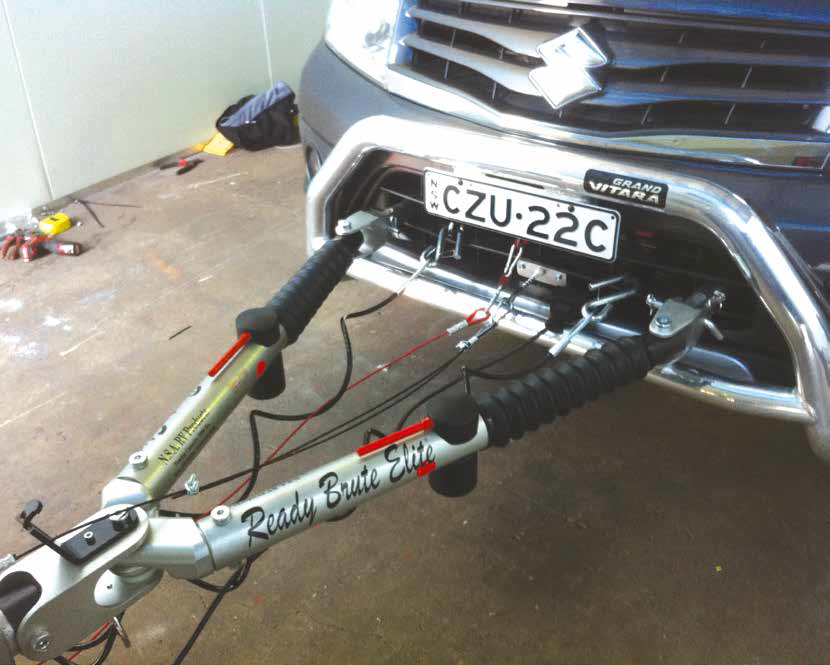 “ADR 62 is the standard that a towbar has to be built to, and it regulates material thicknesses, bolt sizes, bolt grades, chassis thicknesses – these are all the things you have to work with to conform,” Jason says.

He says Custom Towbars is different from a lot of other towbar fitters, “…different in that we are towbar fabricators so we stock all the parts. Our towbars have been tested and they comply with ADR 62 for towing, so once we get one towbar tested, if it is the same towbar we can refit it to other vehicles and it will have the same compliance plate.”

Also covered by the ADR are ‘A-frames’ which are used to flat-tow small cars behind large motorhomes and RVs. They can  present some problems he says. “We always ask for the towing capacity of the RV and every now and then we come across an A-frame that was home-made 10, 15, 20 years ago. It is illegal, so we inform the customer that it does not comply with Australian standards because there isn’t a compliance plate.” It either needs to be replaced or upgraded to be ADR approved.

There is some debate in the industry about towing capabilities of different vehicles, for example dual-cab utes, which may be advertised as a two-tonne ute (tare). If a ute has a 3000kg gross vehicle mass (GVM), which is basically the weight it can carry including itself, and a 3500kg towing capacity, the process of loading up the ute and hooking up a caravan or boat seems pretty simple, right? But this fails to address an important figure known as gross combined mass (GCM) provided by the manufacturer, which is the total weight the vehicle can carry (including itself) and what it can tow at the same time.

If the vehicle’s GCM is 6000kg, and the combined weight of the ute (at 2000kg) and a fully laden caravan (at 3500kg) is 5500kg, then this provides a payload of 500kg – a challenge for a family of four with luggage, personal effects, basic equipment, and a tank full of fuel.

Another element that must be factored when you’re loading your vehicle in is the weight that the caravan or boat exerts on the towball – a 3500kg van or boat might exert a 300kg downforce, which effectively reduces the payload able to be carried in the vehicle itself (that’s the GVM)!

Then there’s another acronym RAC: rear axle capacity, which has been the subject of some discussion, particularly considering the design of some utes, which are light in the rear. Fully loaded utes, that have a metre or more overhang from rear axle to tow ball, may find their steering affected by the excess rear weight, and the van or boat may develop a potentially dangerous swaying motion at speed. This is why Jason says it is important to check the vehicle manufacturer’s towing rating and not rely on the advertising copy.

“We sometimes find that a vehicle advertised as a two-tonner might be right on the limit and the manufacturer will then reduce the effective towing capacity to 1500kg,” he said, adding that despite customer perception that they have a two tonne vehicle, “If 1500 is what the manufacturer of the body says, we cannot go any higher.”

While his towbars go to an ASDR test facility recognised by the (Queensland) Department of Transport, Jason says A-frames are currently all custom made, “…we have an engineer involved who certifies all our A-frames … with the A-frame you get two certificates: one for the baseplate that goes on your car and one for the actual  A-frame that you pull the car with, but New South Wales requires a third engineering certificate for the connection from the motorhome to the car.”

He said Australia has only a couple of fabricators who make A-frames, with the rest American-made. “While the American A-frames might be built to ADR standards, they are not certified as having gone through one million cycles, testing the strength and durability of construction, which Australian made A-frames must do to be fully certified – it is a very grey area.”

Meanwhile, Jason says his company was currently undergoing certification for his Pro-Tow Predator, a 3500kg capacity A-frame to be released later this year.

Jason highlights a little-known problem with some foreign imports saying anyone can legally import a foreign-made RV that is able to be legally driven on Australian roads, but a towbar fitted to the vehicle overseas may not be ADR compliant: “the owner may never know, yet it is his responsibility”.

He says another challenge for RV owners who want to tow a small vehicle on the road trip so they can access locations where a large RV cannot drive or park, is deciding exactly what small vehicle can be flat-towed with an A-frame.

“We are asked to advise a lot of customers about this because there are traps for the unwary, so in some cases we will not only advise but will source these vehicles for customers.”

And while his company does supply ADR-compliant towbars nationwide, and it is legal for these DIY customers to fit them, “we prefer to have interstate customers go to a professional fitter to ensure it is correctly and safely attached,” Jason says. 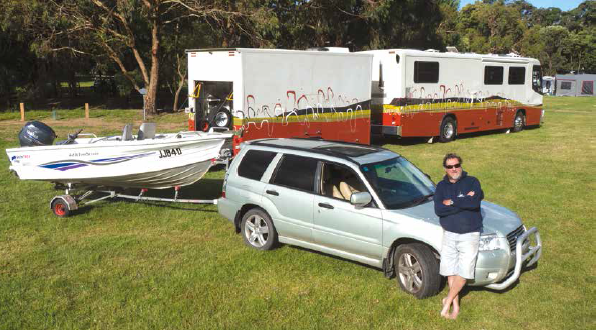 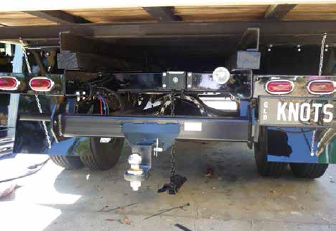 Correctly fitted towbars will have a compliance plate; Jason Gow of Custom Towbars and Trailers says they still see some home-built A-frames; weight falling on the towball will reduce the carrying capacity of your vehicle.