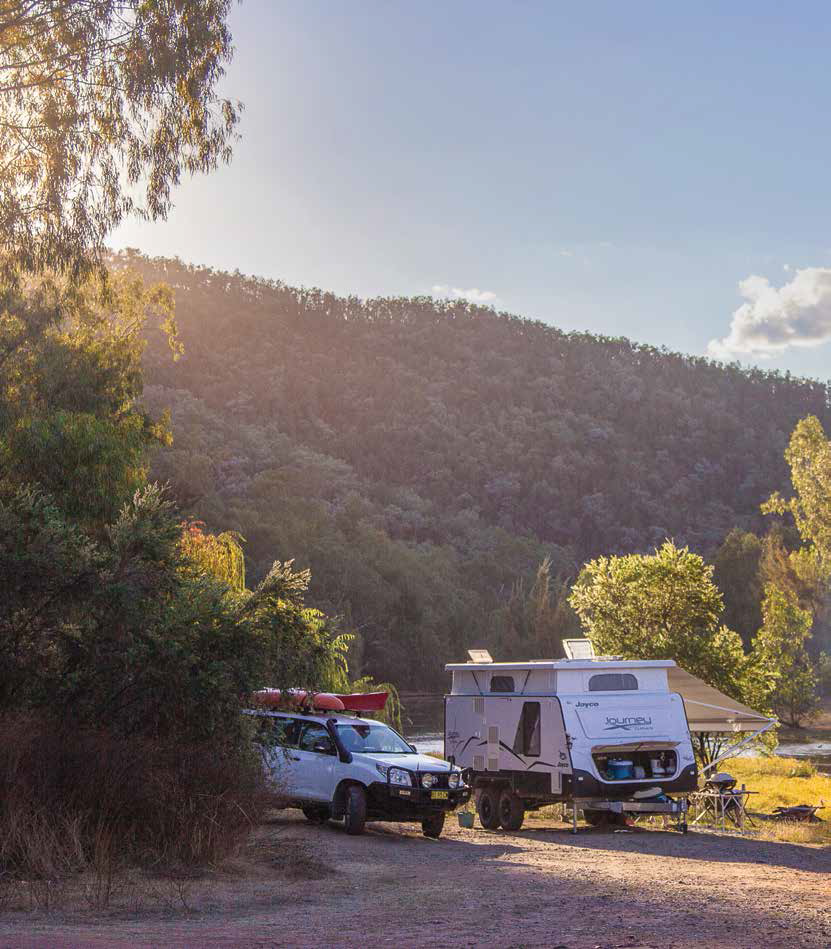 Bingara started life as a river crossing for teamsters travelling north, and during this time over a dozen pastoral properties were established in the area. However, it was not until the discovery of gold in 1852 that settlements developed in both Bingara and Upper Bingara.

Prospectors flocked to the area when tin, then diamonds, were discovered in the 1880s, and rapid development followed. In the 1880s, Bingara was at one point the largest producer of industrial diamonds in Australia.

Bingara became a municipality in 1890, at which time the spelling of both Upper ‘Bingera’ and ‘Bingera’ changed to ‘Bingara’, and at its peak the main street alone boasted five general stores, six hotels, and all the services required to maintain a largely self-sufficient town. 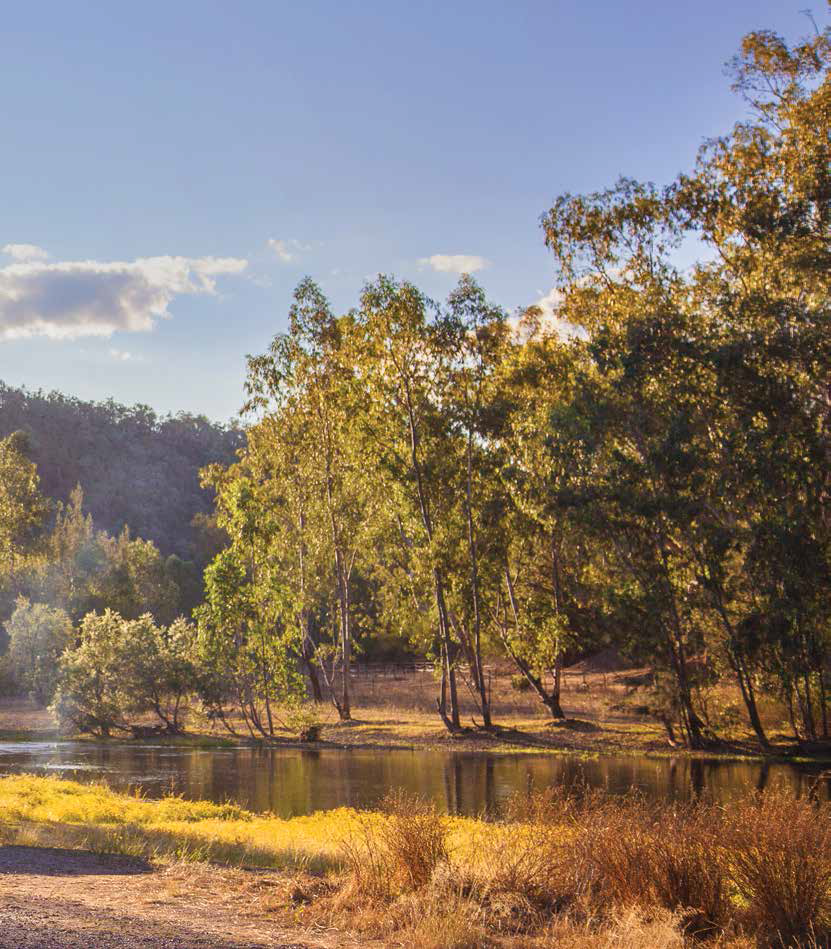 A spot of camping on the idyllic Gwydir River

World economic recession and the end of mining saw the town contract, leaving a heritage of beautiful commercial and public architecture, and the fully restored Roxy Theatre.

Now revered as the “Gem on the Gwydir”, Bingara is a great place to visit and an even better place to live. Safe and friendly, Bingara has clean air, clear skies, and a great climate.

Surrounded by hills, the town rests in a natural amphitheatre. The spectacular Gwydir River is the life blood of the town and its beauty is indeed priceless.

Bingara offers a perfect balance of peace and tranquillity, while boasting an energetic and vibrant community.

Situated midway between Brisbane and Sydney, in northern New South Wales, Bingara is at the heart of the Fossickers Way.

Indeed, the Bingara District is a fossicker’s paradise. Whichever road you take out of town you will find a spot to fossick for gold, gems and crystals. It was the discovery of gold in 1852 that brought a flow of prospectors to the region and it continues to this day.

The gem and rock collection at the Bingara Museum gives an idea of the range and scope of what can be found in the district. In addition to gold, there is rhodonite, jasper,  petrified wood, garnets, serpentine and diamonds.

Bingara is also known as a fishing paradise and offers great inland fishing opportunities. The Bingara Anglers Club established a hatchery in 1980, and have released thousands of Murray cod, yellow belly and silver perch fingerlings into the river system, ensuring a steady supply of fish all year round. The club also hosts the annual Easter Fish competition which runs from Good Friday to Easter Monday  and attracts visitors from all over Australia. 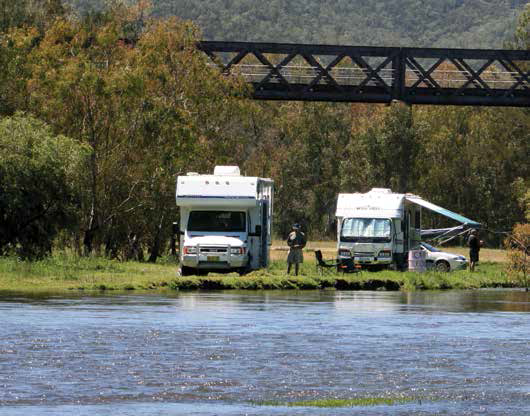 Bingara has also established a wonderful reputation with RV travellers. Voted one of the best free camping towns in Australia, this year Bingara will be adding to its appeal as RV friendly, by offering not one but TWO fantastic festivals.

The “Happy Days – Orange Festival” in July celebrates Bingara’s war servicemen and women with the Orange Picking (Friday, July 5) and the Street  Festival (Saturday, July 6). With rock and roll music, stalls, shop specials and fine foods it is a= festival for all ages, from the young to the young at heart.

In September, the “Pulse of the Earth Festival” travels to the beat of a different drum. This is a new event for Bingara. A celebration of life, of springtime and earth renewal. “Pulse” marks the culmination of the two-year project Bingara has shared with Kandos in the Central West. “An Artist, A Farmer and A Scientist walk into a bar …” is the quirky title for this collaboration.

“The organisers of the “Pulse of the Earth” Festival are delighted to announce that top Australian folk-rock band Things of Stone and Wood or ToSaW will perform on the evening of Friday September 6 at The Living Classroom. The newly released documentary film “2040” from Damon Gameau will be shown on the evening of Saturday September 7 with Damon attending to answer questions.” 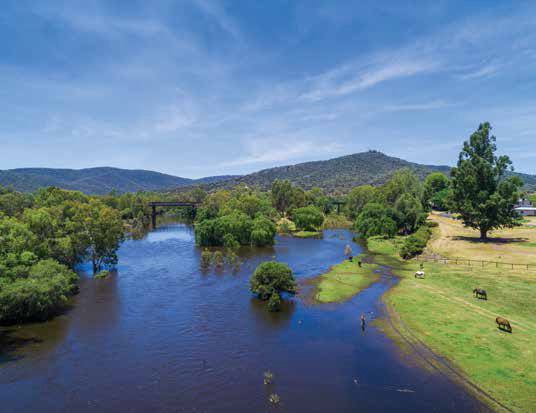 A bird’s-eye view of the Gwydir River

“Pulse” will be based at The Living Classroom in Bingara. It adjoins the Bingara Showground where free powered sites are being  made available to campers and RV enthusiasts over the three days of the event from September 6-8.

Visitors are invited to become part of “Pulse” by being the contestants in the ‘Grey & Thespian Mardi Gras’. Practice your songs, poems, yarns and jokes. Put your gang together and tread the boards of the “Pulse” stage for a chance to win a quirky and unique prize. Check online at www.bingara.nsw.gov.au for details about entries for the Saturday talent quest on September 7.

“Pulse” will showcase the resilience and energy of this beautiful little town and its hardy  district. Bingara businesses pride themselves on providing range, value and country service. Bingara Vision 2020 is the local progress group working hand in hand with the local Gwydir Shire Council.

The North West Theatre Company, based at the majestic Roxy Theatre, are hosts for the ‘Grey & Thespian Mardi Gras’ talent quest.

Built in 1936 by three Greek immigrants, the magnificent Roxy Theatre (situated in the main street of Bingara) is a striking art deco building, with a history as colourful as its painted exterior. It operated as a cinema until 1958, after which  time it was closed and lay dormant for more than four decades. In 2004 the Roxy was faithfully restored to its original splendour and was re-opened to the public as a cinema, performing arts venue and multi-purpose function centre. It has since been listed on the NSW State Heritage Register as a site of historical significance. The theatre embraces some of the most striking original Art Deco architecture in New South Wales and still contains the original fixtures and fittings, including the ornate stucco plaster, paintwork and coloured lights from 1936.

With the Roxy Café (Peters and Co Greek Café) restoration completed in 2011 and the Roxy Greek Café Museum 2014, the Roxy Complex is destined to become a place of national significance that conserves  and protects the important cultural associations between people and place. The Roxy is a must-see venue if you are visiting Bingara. 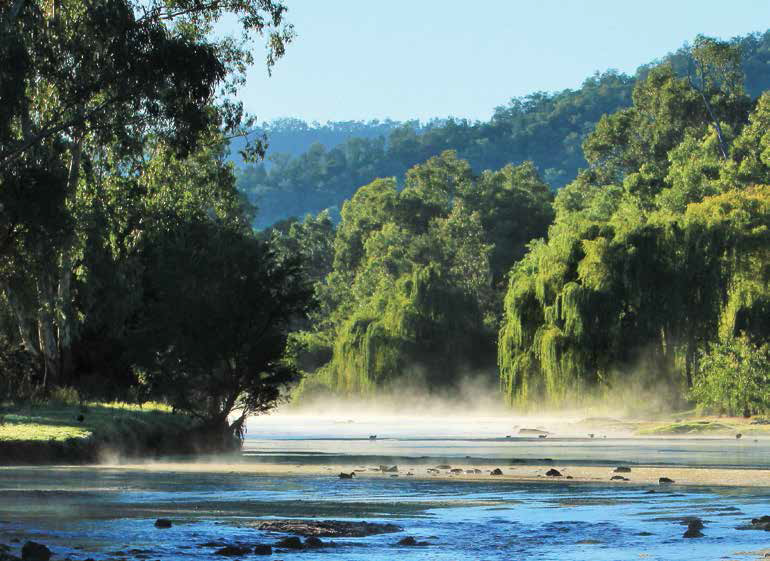 A unique feature of Bingara which has attracted worldwide attention, are the orange trees lining Finch Street. Planted in the 1950s as a living memorial to Bingara’s fallen in World War II, the trees and the annual harvest by the school children (The Orange Police) have become a symbol of community pride and the focus of the highly popular annual Orange Festival. A special ceremony outside the RSL Club marks the start of the harvest which is conducted on a designated day near the end of June each year.

Another tourism attraction is the Myall Creek Memorial.

On June 10, 1838 a gang of 10 convicts and one free stockman  who had come from across the north west region, slaughtered 28 unarmed Aboriginal men, women and children who had sought refuge at Myall Creek Station. No motive was ever established. Prompt action by the station overseer led to the eventual arrest and trial of the perpetrators, and after two trials seven of the men were hanged for their part in the crime. It was a pivotal moment in Australian history that focused attention on Aboriginal people and hastened the end of convict transportation.

Now listed on Australia’s National Heritage Register, a memorial has been established at this important site, 23km from Bingara via the Delungra Road. Visitors can take an easy walk along a well-marked path where stone plaques tell the story of the massacre and  its aftermath. Overlooking Myall Creek and the approximate site of the massacre, this area also provides excellent bird-watching, a peaceful atmosphere, and is one of Australia’s most important centres for reconciliation.

During the June long weekend a ‘Friends of Myall Creek’ memorial service is held at the site, attracting visitors from across the country, and featuring well-known guest speakers.

Bingara is also utilising The Living Classroom to become a ‘closed loop’ community – self-sufficient in food and recycling all compostable waste (including treated sewage).

The Living Classroom is turning 150 hectares of little used town common into a food production wonderland. Combining agricultural activities with horticulture,  aquaculture and forestry, the Living Classroom is focused on quality food and the links between soil health, plant and animal health, and human health. The site is for the casual visitor and for those who wish to learn. A beautiful place to wander around, soak up nature, be inspired, or to ‘get down and dirty’. 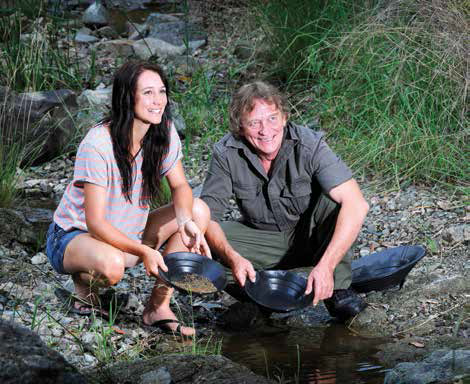 A couple of modern-day fossickers

The project is a model for regeneration of agriculture and for rural communities. It will enable the town of Bingara to prosper in a rapidly changing world.

Bingara IGA & Hardware is a onestop department store with goods from groceries to hardware, liquor to furniture.

Meat On Maitland provides quality meats and prepared meals from a wide range of local produce including the delicious Horton Valley Premium Pork from the McDouall family, sixth generation farmers from the Horton Valley. And if you want to consider buying a home or a block of land in Bingara, speak with Christene at Ray White Rural.

It’s a great time to make your winter and spring travel plans. Why not make Bingara a part of your journey? Check your diary for the “Happy Days – Orange Festival” on July 5 and 6, and the “Pulse of the Earth Festival” on September 6, 7 and 8.

There is always something new to discover in Bingara, ‘the heart of the bush’ in northern NSW.

NB. For details of caravan parks and free camp sites along the Gwydir River, pop into the Bingara Visitor Information Centre or visit www.bingara.com.au 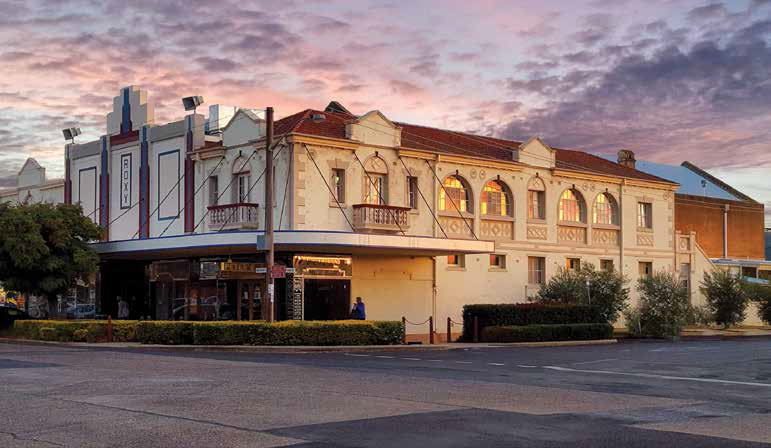