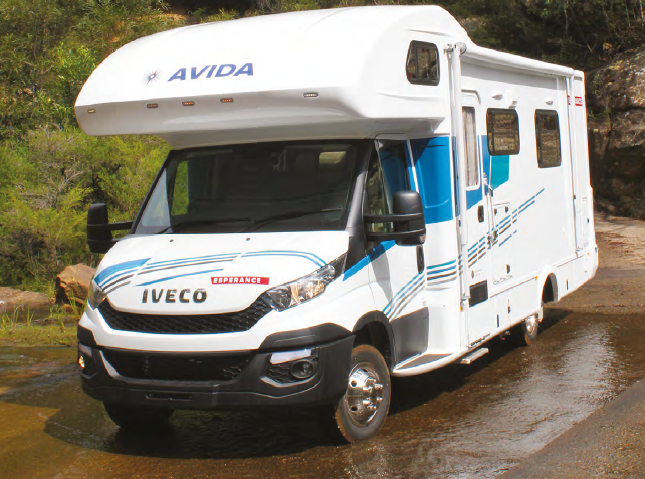 Bigger is always better, at least when it comes to motorhome living space. Here the new Avida Esperance takes its living space to almost double the size thanks to its new slide-out.

While the previous Esperance was also a slide-out, it only extended the cafe dinette section. In this new model, the slide extends to the bedroom. This new spacious layout and the new 2015 Iveco cab-chassis on which it is based are the main ingredients of the new Esperance.

The Iveco Daily is new for 2015, and this is the first time we’ve seen the new Iveco with a motorhome conversion. Eighty per cent of the cab-chassis body panels are new, while the chassis, with its C-section steel outer members, is retained from the previous 2011-2104 generation four model. The seat (H-point lowered by 15mm), steering wheel (20mm smaller and seven degrees more vertical) and windscreen (40mm more glass with a four degree improvement in visibility) are new. The new interior has five closable compartments, three cupholders and various cubbies for items such as tablets and mobile phones.

The non-slip step makes getting in and out of the cab relatively easy, especially as it does require one to climb up to get on board. The seats are a little flat but thanks to their various adjustments getting into a comfortable driving position is quite easy. The controls are all easy to find and use, and vision forward and to the sides is excellent. The rear vision mirrors each incorporate two sections – a large, flat mirror and a smaller, convex mirror below, both remotely adjustable. They work well. 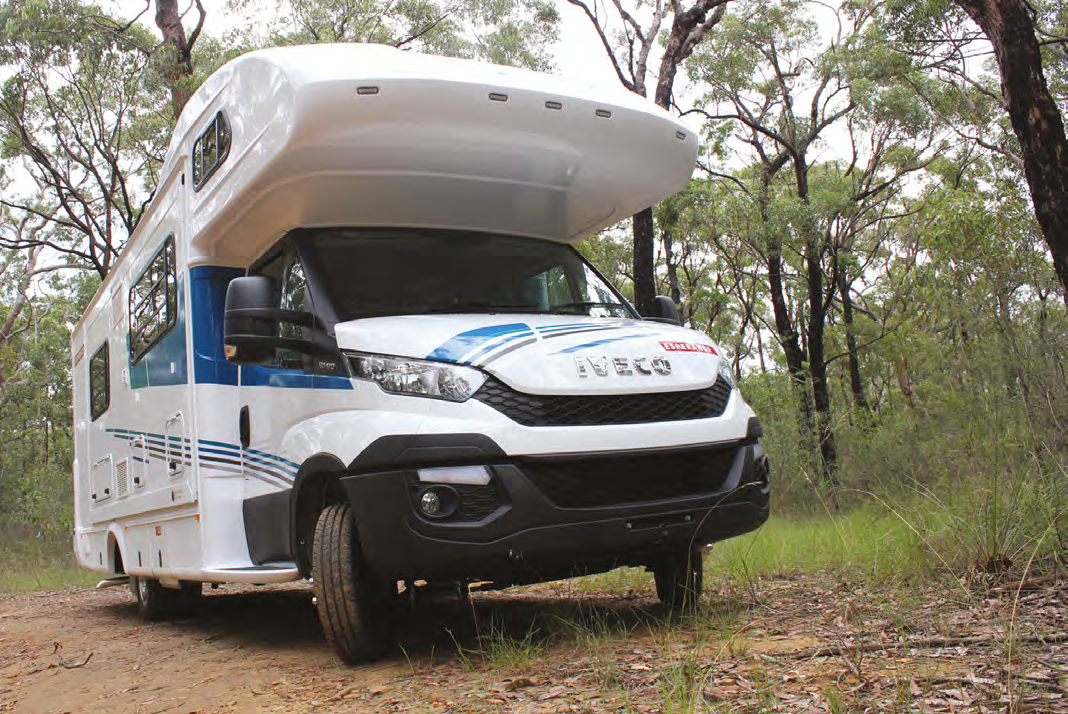 The Iveco’s commercial origins are quite obvious when driving. Noise suppression from the road and engine are acceptable, but hardly passenger car-like. The engine provides excellent response in the lower gears, and while hill climbing on the freeway does take the edge off, it only knocked off 5km/h (from 90km/h to 85km/h) on our test hill.

The six-speed automated manual transmission is like all such transmissions, a mixed bag. When trying to maintain momentum - such as when hill climbing on the freeway - and a downshift is required, it can pause for too long during  the downshift. However, when climbing a steep, slow section of road, the downshift from second gear to first was decisive and quite smooth. You just can’t rely on this always being the case.

The Esperance never felt too large to manoeuvre, but its long rear overhang might prove a sticking point on steeply angled driveways. 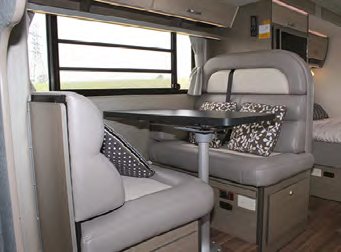 With the motorhome parked, it was time to explore the living quarters. Stepping in to the living area via the generous walkthrough space, the overall impression is that it does seem a little cramped back there. While the kitchen and dinette area has enough floor space if you want to stop on the roadside for a cuppa, you have to climb over the bed to get to the bathroom. There is no space to walk around the base of the bed. 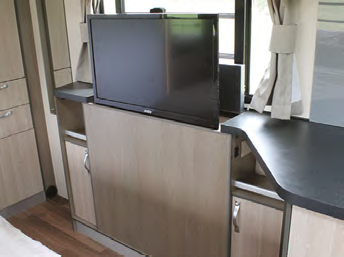 Yet, of course, this is the whole point of this slide-out – you can, with a press of a button, extend the area from behind the cab to the end of the bed (provided that there is enough space on the offside of the motorhome to do so). With the slide-out extended, the Esperance has an abundance of living space.

With ample windows and a large roof hatch, the Esperance allows in a surfeit of natural light. Instead of hopper windows, the openings house louvred windows, screened and curtained. The dinette provides the two forward-facing occupants lap-sash seatbelts, and there is enough room for four average-size adults to sit comfortably. Above the dinette is a small amount of locker storage space, while underneath the seats there is also storage available via hatch doors. The forward storage space is also accessible from outside the motorhome via a lockable hatch.

The kitchen is mounted on the nearside wall, opposite the cafe dinette, except for the fridge and microwave, which are fitted to the offside wall between the dinette and bed. There is a lot of bench space in the kitchen, especially when the glass top of the hob is closed. The bench extends to a narrow section at the base of the bed, although you’d have to be careful not to place anything that might leak onto the bench here. More on that later… 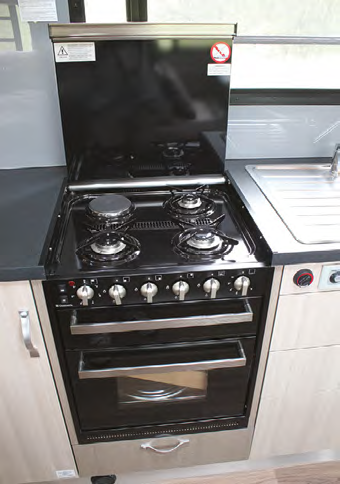 Looking at the kitchen from right to left, there is a domestic stainlesssteel single- tub sink with drainer, water dispenser and single mixer tap, then the three gas burner/one electric hotplate cooktop and grille/oven, and then a section of open bench space. Just beneath the sink are switches for lighting, the slide-out and hot water service. Below these are three slide-out drawers. Underneath the oven is a single drop-down door cupboard. To the left of the oven is a narrow cupboard door, which opens to reveal a slide-out pantry. The slide-out pantry is not a new idea, but it cleverly provides some additional food preparation space thanks to its own small bench top. A glass splashback rises from the benchtop to the five lockers above, under which is the rangehood with two integral LED down lights. The two lockers to the right and two to the left reveal two-shelf storage spaces while in the centre is a wine storage compartment that houses up to six bottles. 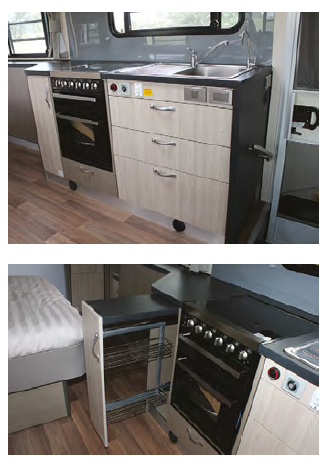 On the off-side wall is the 150-litre fridge/freezer and above it the microwave. A small storage locker is housed above the microwave.

The double bed sits transversely towards the rear of the motorhome, sitting against the offside wall. The bed base hinges  open with gas-strut assistance, and under the bed is a generous amount of storage space.

There are lockers above the bed, as well as those mentioned before at the end of the bed, carrying on from the above-kitchen lockers. There is also wardrobe hanging space and drawers to the right of the bathroom door. At the foot of the bed is a large flat-screen TV that pops out of the benchtop. This is why you don’t want to leaving the chopping board loaded with dripping wet lettuce on this part of the bench.

At the rear of the layout is a separate bathroom. The glass entry door opens to a spacious area, with the separate shower off to the left (on the offside) and then alongside sits the porcelain bowl cassette toilet. Next to the toilet is the vanity unit, with a stainless-steel tub sink and a single mixer tap. Above the sink is a mirrored storage cabinet, and there is a glass in a dedicated holder to the right of the sink. Above the mirror is an open storage shelf and to the left of that a large two-shelf lidded locker.

The bathroom has two ceiling hatches; one large one above the middle of the bathroom and another smaller one  directly above the shower. Both have forced-fan ventilation.

There is also an external hot/cold shower on the nearside rear wall of the motorhome. 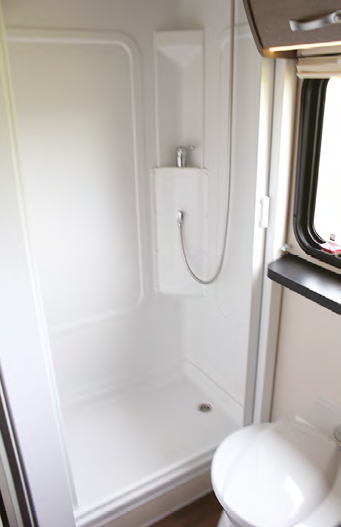 The Esperance has a plethora of LED lighting throughout the cab, living area, bedroom and bathroom. There’s also the pop-up large flat screen TV (as well as an external entertainment unit, with TV mounting point, aerial jack, two audio speakers and two 240V power points) and of course the powered slide out. These are fed by two 100 a/h deepcycle batteries, charged by an on-board 22amp charger. A 240-volt roof-mounted air-conditioner is fitted, as is fan-assist diesel heating.

There is so much storage in the motorhome – there would be enough space here for four to have their clothing and other needs housed for a few weeks’ away. Aside from the numerous storage facilities inside, there are plenty of external storage lockers, including a compartment with a slide-out tray for a generator.

This is a comprehensively equipped motorhome with an abundance of both accommodation and storage space. That the slide out extends so far down the body now is its major drawcard.

Spacious interior with the long slide out; loads of storage cubbies

COULD HAVE BEEN BETTER