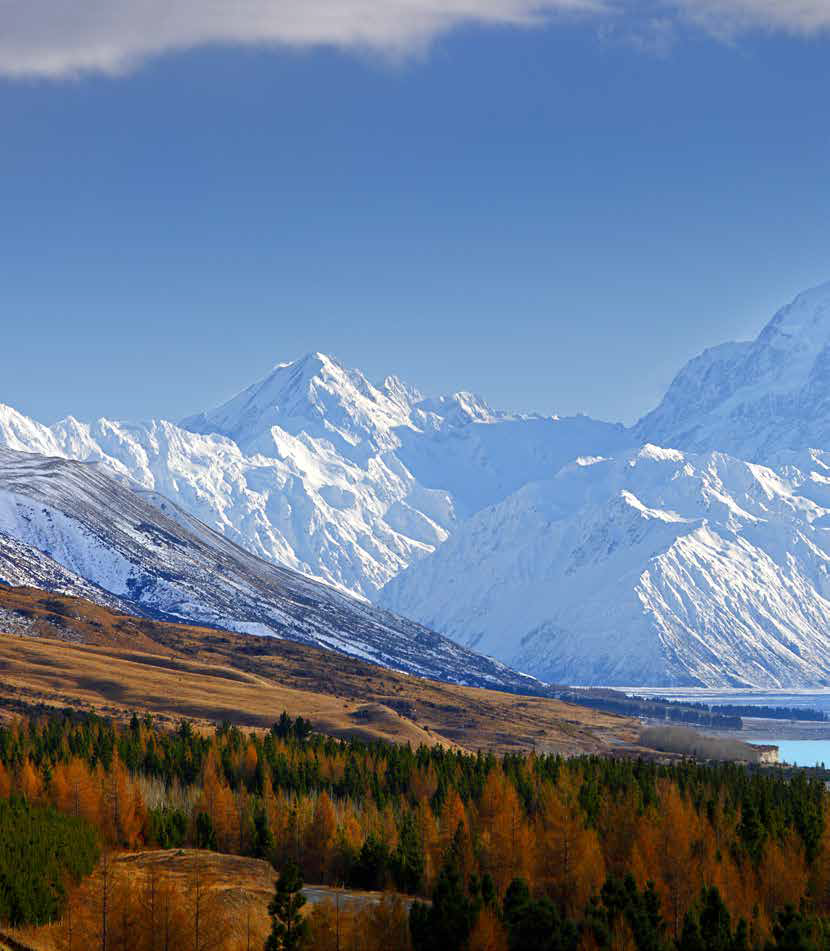 In January, my wife Glenda and I completed a five week motorhome tour of New Zealand, which included both islands, travelling more than 5,000km. From Auckland we travelled north up the west coast (Kauri Coast), which was great for forest walks. We then cut across to the east to the very beautiful Bay of Islands (Paihia), then back south through Auckland and down to Whangamata. Because of time limits, and some road damage from recent floods, we did not explore the popular Coromandel Peninsula. Next we tracked south down the coast as far as Whakatane, where we took a boat tour to the active volcano White Island. Heading inland we explored the geothermal areas around Rotorua and Lake Taupo, then journeyed south to Wellington.

On the South Island we travelled south from Picton along the east coast via Christchurch and the very pretty Akaroa, then further south before turning inland to Lake Pukaki and Mount Cook (two spectacular sights). Heading south again we visited the pretty old town of Cromwell enroute to Queenstown. Here we stayed at the quaint nearby village of Arrowtown – this was much quieter than the frantic activity of Queenstown. Rather than do the long and arduous drive to Milford Sound, we did an excellent tour instead. Our route then took us north to Wanaka (a very picturesque town on the lake’s edge) across to Haast on the West Coast and then north to Fox Glacier and Franz Josef. Continuing north we visited Greymouth, but a storm had caused road damage which prevented us carrying on to Westport, so we went inland via Reefton then Nelson and finally back to Picton. Returning to the North Island we toured from Wellington to Whanganui, then north to the famous Waitomo Caves, and ultimately back to Auckland for a few final quiet days in an apartment.

This itinerary proved to be quite busy. We drove the 5,000km in 32 days. In hindsight, a more relaxed schedule would have been better. Both islands have much to offer, and we certainly missed several notable areas. If you can afford to do New Zealand twice, we recommend doing one island at a time. 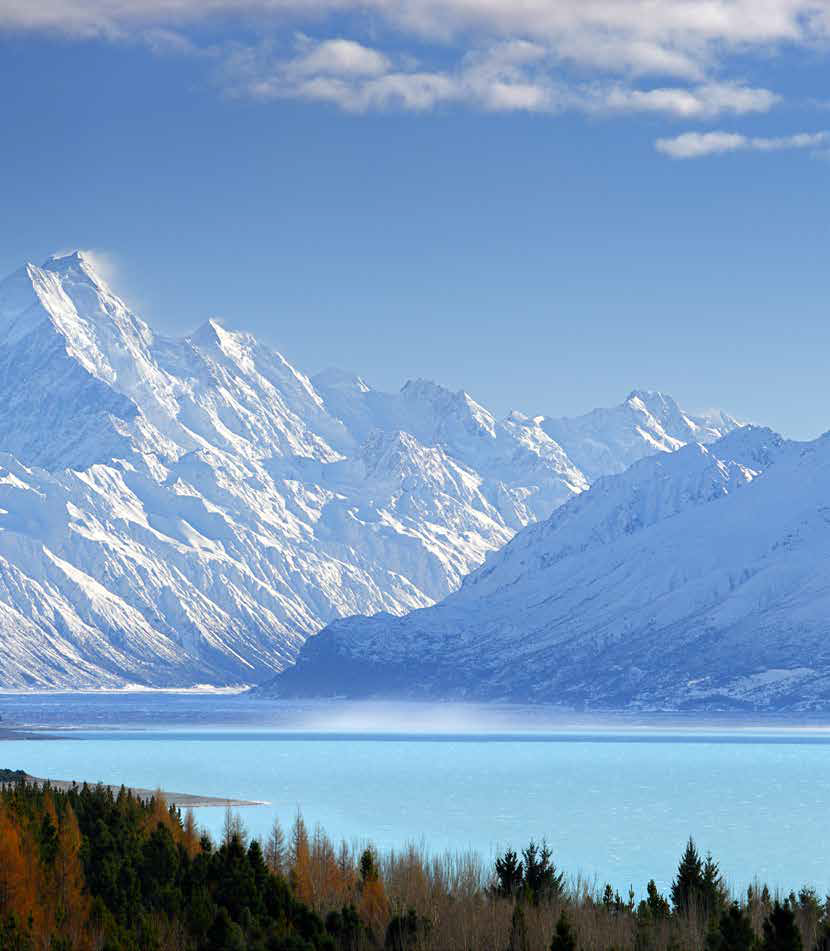 PERKS OF THE NZMCA

We joined the impressive New Zealand Motor Caravan Association (NZMCA) when we first started planning our trip. For a very modest fee, membership provides CMCA members great discounts, including the Cook Strait ferry, access to a large network of exclusive NZMCA campgrounds and member-owned ‘park over properties’, as well as a wealth of information on free camps, dump sites, etc. We recovered our membership expense several times over in financial benefits, but most importantly it put us in constant contact with like-minded locals, who gave us invaluable tips about the roads, sights to see, and much more. It also gave us the opportunity to camp in quiet locations devoid of backpackers or hordes of local holiday makers.

If you are travelling during peak periods, it’s vital to book tours or accommodation that are important to you well ahead of time. Iconic destinations like Milford Sound or glacier heli-hikes fall into this category. Because the weather can change quickly in New Zealand, be prepared for last minute cancellations. If possible organise your schedule so that you can change the booking to a day or so later than planned. For example, a heli-hike booking should be on the first day of your planned stay in Franz Josef, and you should have the flexibility to do it the next day or later if conditions force a change.

One of the main issues we noted about New Zealand is the vast range of activities and tours available, and also how expensive it can quickly get when you start to add up the cost of everything you might like to do! Unless you have an unlimited budget, some careful thought is required so that you get the best value for your money. On the other hand we thought food prices were similar to Australia. Naturally, it is possible to spend a great deal of money if you keep eating out! Travel in a diesel vehicle (we found prices quite reasonable) from about $1.20  to $1.50 per litre, but unleaded fuel was often around $2.00 per litre. Although Aussies get a marginal benefit from exchange rates, we found it best to ignore and instead be thankful for it when we made unplanned purchases. 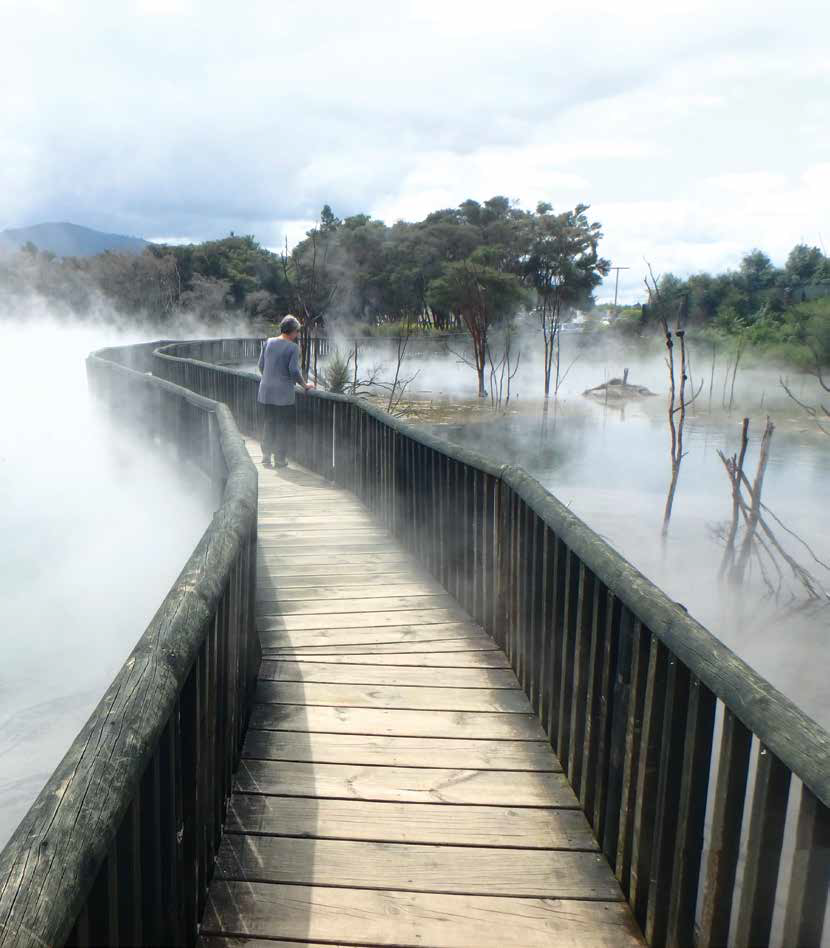 New Zealand has a very meaningful roadside sign which you will see often, it says ‘New Zealand roads are different – allow extra time’. This is a critical piece of information. Although you will very rarely experience a ‘metal’ road (we would call it unsealed or gravel), there are many places, especially around iconic destinations, where sections of the road can be mountainous, very winding, and sometimes narrow – often with sheer rock walls on one side and unprotected, enormous drop-offs on the other. Disconcerting for an Aussie driver from very flat Western Australia! Almost every road outside built-up areas has a 100km per hour speed limit – even if it is a scary section of twisting mountain track. Ignore that and pay special attention to the advisory speed signs on corners. In a motorhome these advisories should be treated as maximums - even in good conditions. Plan to average 50km per hour, no matter what the road looks like on a map. Road rules in New Zealand almost mirror those in Oz and they (thankfully) drive on the left of the road. Many bridges in regional areas are one lane only, but there is very clear signage as to who has right of way.

Because of the geography of the country often the road you are using is the one and only way to get to your destination. If there is a road accident or a ‘slip’ (when a roadside hill collapses onto the road) you may be delayed. Sadly, we were delayed on three occasions by serious road accidents. Having said all that, do not be too alarmed – the road network is in good condition and can be negotiated quite safely with sensible discretion. When driving in NZ it is not the roads that are a concern, but rather the locals who are too familiar with them and have a very casual attitude towards speed limits and general safety. Visitors  also need to watch out for the huge amount of tourists (from all parts of the world) who have no idea what they are doing. Protect yourself by travelling at conservative speeds and assuming that around every blind corner there is likely a fool coming the other way who will be using some of your side of the road. Pull over often to let traffic behind get past. Forget about the sort of daily distances we might sometimes cover in Oz – think of 200km as a big day. 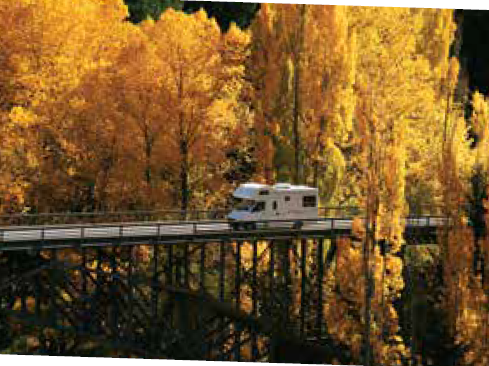 Obviously this is a factor outside our control. We chose to travel during the peak tourism season because it is the height of summer, and we do not like the cold. It would be possible to have an equally pleasant, but very different experience, in the depths of winter. The only meaningful advice is to expect hot, cold, wet, and dry weather at any time – so pack a range of clothes that are good for layering. Certainly a quality rain jacket and umbrella should be included, but you must also have swimming gear, if only for the geothermal hot pools (we had only a few wet days in January, but on a couple of occasions the heavens opened dramatically).

This information assumes travel by motorhome, although there are many options in New Zealand and we know of other travellers who have especially enjoyed travelling by car, using B&Bs for their accommodation.

As referred to previously, NZMCA membership provides access to a network of exclusive club-owned and operated campgrounds costing $3 per person per night. Sometimes these are just a very large flat patch of grass behind a secure fence, but some have water supplies and dump sites, and even toilets and showers.

The network of free NZMCA ‘park over properties’ is also enormous, and sometimes water and power is available (usually at a small cost). There are also many free or lowcost campsites available to NZMCA members at various clubs, motels, and other organisations throughout the country. In many towns, public  car parks have several bays clearly marked and signposted for fully self-contained vehicles to camp overnight. Quite often these are in desirable locations, like right on the beachfront. Even in central Wellington, it is possible to camp overnight for free in a yacht club car park – and about 50 vehicles (mainly backpackers in very dubious ‘self-contained vehicles’) did so when we were there. The Department of Conservation (DOC) operates many campgrounds all over New Zealand. They are usually in very attractive locations, such as national parks or reserves. Fees and facilities vary, but about $10 per night per person was common. Of course there are many commercial holiday parks with amenities similar to those we find in Oz. We found these to be crowded and noisy, but to be fair we were there during school holidays. Free dump points are available in a very large number of locations across the country.

As keen motorhomers, it was easy for us to chose that style of vehicle to travel around in. Fortunately, there are many vehicle hire companies in New Zealand, with a huge choice in size, price, and quality. Book early as we first planned to visit New Zealand in early 2017, but in late 2016 found it impossible to hire a vehicle to our liking. Then we discovered a privately owned vehicle (‘Jumbo’) which looked perfect, but was also booked for the summer of 2017 - eventually we booked that for January 2018.

If you have not been to New Zealand – just do it! It is so easy to travel – similar culture, similar road rules, familiar food, terrific RV club, more or less the same language, and wonderfully friendly locals. And the scenery will blow you away. Middle Earth – what a blast!

New Zealand is roughly 3.5 hours flying time to both the North or South Island, from Australia’s major cities. Major cities include Wellington (the nation’s capital city) and Auckland (the most populous city in New Zealand), which are both located on the North Island, and Christchurch and Queenstown on the South Island. Self-drive trips of New Zealand are one of the best ways to properly explore the spectacular and rugged landscape, but it’s important to be aware of road and weather conditions before you set off.

Booking ahead for major attractions including Milford Sound, Heli-hikes, or White Island is highly recommended, especially during peak holiday periods.

Learn more about New Zealand at www.newzealand.com/au/. Check out www.privatecamper.co.nz which may help in finding your ideal type of New Zealand travel vehicle.