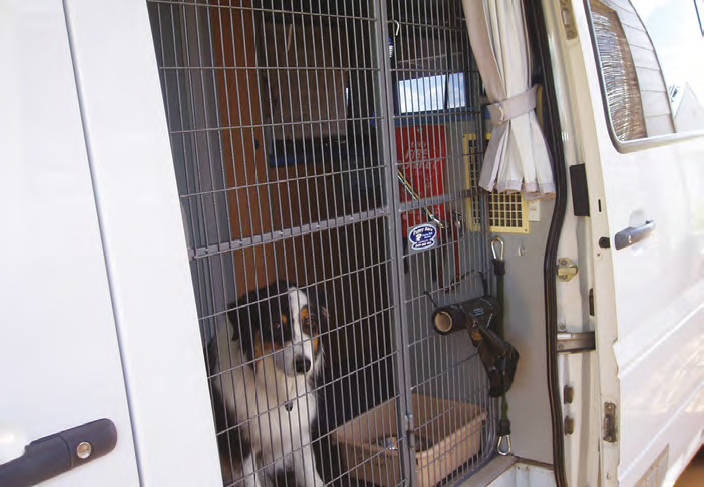 First up is a simple and cheap way to have a non-spill water bowl from Arthur Barrot W84743 and his Airedale, Jasper. Arthur made a drinking bowl from an ice cream container by cutting a hole roughly 4.5 inches in diameter in the lid, as the photo shows. Arthur states this has meant no spills as he drives along; the only spills have come from humans stepping on or in the bowl.  Arthur said, “We all enjoyed eating the ice cream. All I need now is to find a black ice cream container – it would suit the décor better.”

Sue Waghorn V25524 travels with her Labradors. She has experienced some resistance from caravan parks to allow her multiple, large dogs to stay. To overcome this Sue created her own dog passport. Sue said, “l created a small booklet which allowed park owners/managers to sign and comment on our dogs stay. Whenever we wanted to stay somewhere where the owners were a little hesitant I could pull out my passport and show them the reviews and they usually then gave us a chance. It’s also interesting to read back through to see where we have all been.”

SAFE AND SECURE INSIDE AND OUT

Dorothy Sturgess V63881 and her Aussie shepherd, Smudge, love travelling in their motorhome. An incident at a caravan park where children had released a dog from where it was tethered highlighted the importance of being able to create safe and secure space for Smudge.

Dorothy had a barrier made for the sliding door of her motorhome as shown in the photo. This allows airflow and prevents the heat from building up while she goes to where she cannot take Smudge with her, such as supermarket shopping.

Dorothy said the barrier is made to measure, it is double dip galvanized, and powder coated. It even has towel rails on the inside. It is lockable so she can leave the sliding door open on hot nights and feel quite secure inside. This has worked so well that she is even contemplating getting some made for the rear doors to allow flow through ventilation.

When spending time outside the motorhome, Dorothy purchased a portable yard, which lovely Smudge models for us  in the photo. Dorothy said, “I find that a corral gives Smudge the freedom she needs to move around without having to be tethered.” Portable yards come in many variations and are stocked by pet stores. Dorothy thought she paid around $130 for hers. 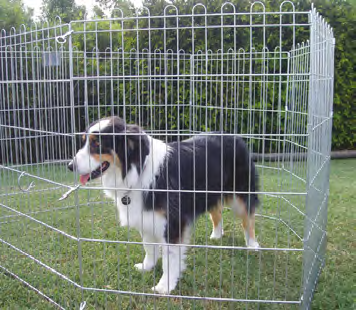 COOL TREATS FOR A HOT DAY

John Hickman W34625 used to travel with his dogs and accidentally discovered his dogs like some frozen food he dropped his frozen leftover on the floor. As a result of this he started making food ice blocks for his dogs in summer.

John mixed the leftover food with rice and used the food’s juice to make sure that the mixture was soggy. Then he poured the mixture into ice block trays. John said, “When frozen, and on a hot day, I would break the blocks out of the trays and give the dogs one as a treat. It was interesting to watch, as both dogs would carry the blocks around in their mouths, sucking them.”

Kathy Threadingham W52870 has been a nomad full time in the heat of WA’s north for more than eight years and travels solo with her two dogs. Kathy said, “It’s important that you tell the readers that a wet dog with long hair will over heat as the hair locks in the heat of the dog by laying flat. Just a mist of water is better and then fluffed up so the breeze can cool the water content in the fur.”

She does not have air-con in her vehicle. One of her dogs has long hair and she gets that dog’s coat trimmed and she uses a spray bottle with a ‘mist’ setting on its nozzle to help cool the dogs down with water sprayed onto them. Kathy also wets sarongs and then flicks them until cool and the dogs lie on them while they are sprayed with water.

Kathy also uses water bottles with the ‘pop’ type nozzles which she says are great cold to dribble the water in front of the dogs mouths and they will lick it. Ice blocks in their water bowls are good but they don’t last long in 48-degree heat. Kathy said, “Making them drink cool water this way from the bottle will keep them hydrated more often.” She uses extra large Super Chux, wets them, flicks them until cool and places them on the dog’s heads to cool their brains.