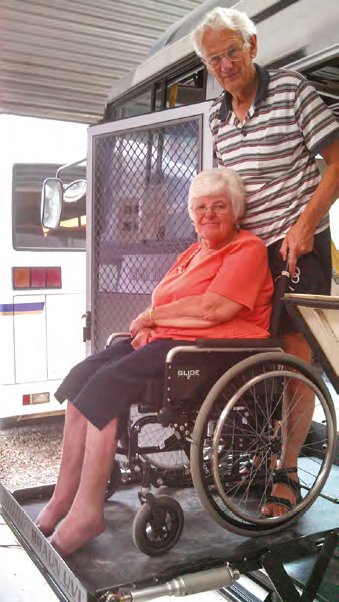 “I’m amazed; how did you do that?” This question was posed by an observer sitting in a wheelchair in the car park in Narrabri, as I had wheeled my wife, Cheryl, into our motorhome. For half-a-dozen years now, we have enjoyed the freedom of lifestyle afforded us with a self-contained vehicle.

Our first venture into motorhoming was in an Iveco van conversion. With the need to get my wife in and out of the vehicle in her wheelchair, some ramps were spotted on a TV show and a follow-up led to finding them made by a small family company at Wilson River, on the north coast.

On our first trip north, we called in and within a couple of hours (spent having a pleasant morning tea on the banks of the river) we set off with a pair of aluminium ramps made to our specification.

The ramps slotted into the front of the step under the side sliding door and enabled us to easily enter the vehicle. Getting out though, usually involved my wife sitting on the floor and sliding to a standing position next to her wheelchair – usually with second glances from passers-by – but giving a practical solution to the problem.

Deciding to upgrade to a larger vehicle, we took the plunge, selling the van and commencing a journey of building a motorhome on a cab-chassis. This was finally on the road after some months,  with us still relying on the trusty ramps to enter the home. With a different floor height, my son and I designed and built an extension to the entry step which folded down to accept the ramps, leaving the top 150 or so millimetres to tip the wheelchair up onto the floor level. This was the method that our onlooker had seen at Narrabri.

While generally successful in entering and exiting the motorhome, there were several occasions when due to the lay of the ground, the ramps were very steep and the inevitable accidental exit from the wheelchair caused associated aches and pains in Cheryl’s neck and other areas of the anatomy.

After the usual ‘big circuit’ and several trips up to Queensland, and enquiries as to alternative methods of entry leading to dead ends, I had been growing increasingly interested in bus conversions, especially with the drawcard of a powered wheelchair lifter.

Having sighted a suitable lifter which fitted outside the bus and was not hungry for internal space, we made enquiries as to its availability. Alas, it was no longer obtainable.

Research on the internet, though, found a Braun underbody lifter which looked ideal for our requirement, but was in the US. An email to the company turned up the Australian supplier and further questioning revealed that they believed the unit may work in our situation, as it is mainly geared for HiAce-type vans.

A visit to Neville Stone, at Tramanco, in Brisbane, and a demonstration of the unit confirmed our belief that we were on to a winner, so an order was placed for the smaller of the two available units. With a delivery time of a couple  of months, we set about designing the interior of our Mk III motorhome.

As well as visiting Tramanco, we had also been making enquiries as to suitable builders in the Gold Coast area, settling on First Choice Motorhomes, whose owner, Andrew Butcher, was prepared to tackle the unforeseen challenges of modifying a bus and fitting the lifter as well as doing the internal fit out to our design.

Andrew rose to the challenge and with a suitable bus available – Japanese Hino RH160 wide-body import – we placed the order for the build and waited for the lifter to arrive. The wide body of the bus gave us sufficient space internally to move the wheelchair along the aisle, while not compromising cupboard space. Another advantage of the wide body is to give sufficient depth to the bathroom to enable Cheryl to sit down while in the shower.

Within a week or so of the lifter arriving at First Choice’s factory, a new wider entry door was installed, storage bin shortened, the lifter bolted in place, controls installed, power temporarily connected and photos sent of the lifter working beautifully.

Several trips were made to check progress over the time taken to build our vehicle, with many phone calls, emails and photos travelling back and forth as well, ensuring everything was done to our satisfaction.

We opted for drawers in most locations, taking every opportunity to maximise  storage space, both under bench and overhead. A 2000W inverter/charger with monitor and remote control with its own transfer switch has been a good companion to the three house batteries. 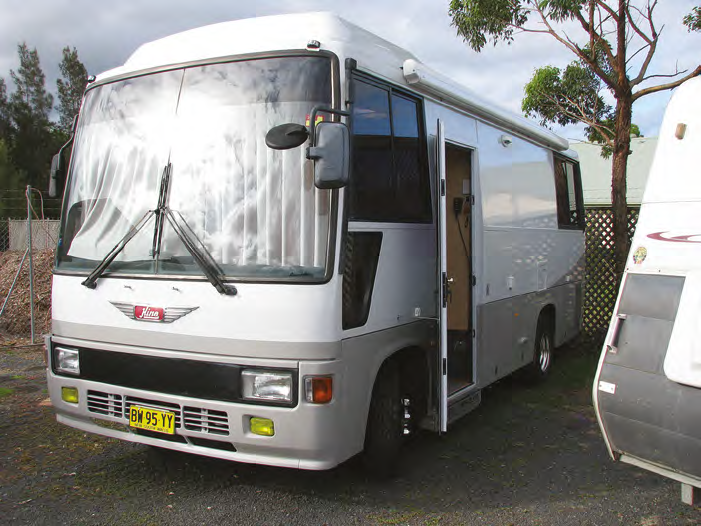 Naturally, with so many unknowns, some issues were bound to crop up. The main problem we have struck so far is the slightly less than desirable lower mounting of the lifter due to the air brake tanks under the floor. This has necessitated modifying the plate that folds out from the front of the lifter when it is at floor level, to make it about 100mm longer than supplied. This gives a very slight uphill slope to the main floor from the lifter in its raised position – as shown in the accompanying photos.

This small issue does not cause any problems though, and the advantages of having Cheryl go from ground to floor in one move without any risk of falling off, far outweighs the couple of degrees of incline.

The swivelling front passenger seat makes for an easy transfer from seat to wheelchair and with the wider aisle, there is room to transfer also onto the lounge.

We ensured that sufficient house battery capacity was installed to cope with extended free camping generally,  and the power used by the unit does not even make a dent on the meter, confirming our decision to install this unit. 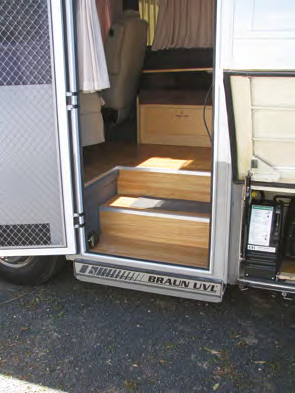 The control unit takes up a small corner of one of the external bins and is fitted with a manual over-ride in the event that a breakdown occurs in the system. A buzzer has also been installed as part of the unit’s circuitry to indicate the lifter has not been stowed if the ignition is turned on. To accommodate the lifter, the wider door has reduced the width of the under-bus storage but not to any great degree. 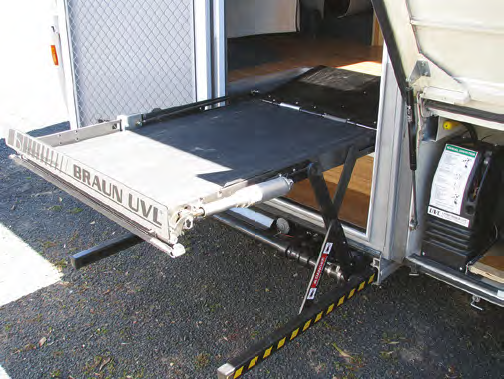 We picked up the new unit in late July and have already had several trips before the Christmas holidays where Cheryl has enjoyed the new-found freedom of easy access. With school holidays over we are ready to head off again into the wild blue yonder.

If any readers are interested in going down this track they do need to be aware that the Hino is a manual and an LR licence is required to drive it.

We look forward to many more ‘ups and downs’ in our travels, and if you happen to see us on the road and are interested in our unit, please come and have a demo. 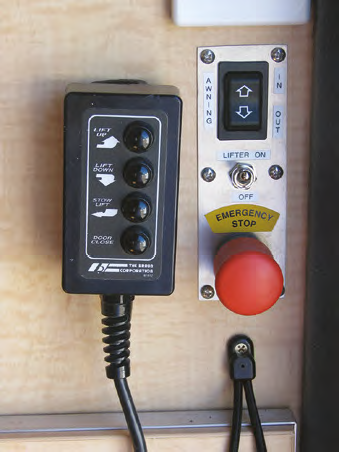