Features Reviews Technology Cooking Destinations Stories Fishing
All That Glitters is Not Gold
Words and Images by: Chris Maher 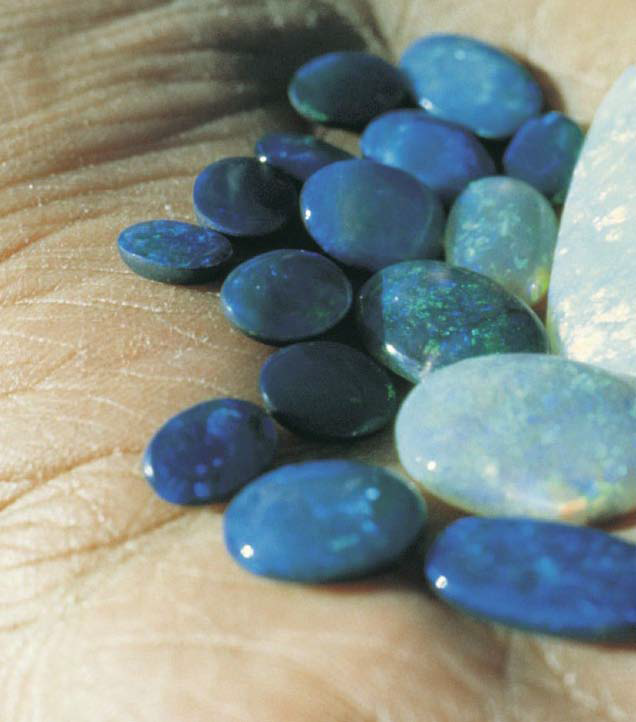 Fossicking has many joys. First, it is something practical and enjoyable to do outside (or maybe underground); it can be a hands-on way to experience an important element of Australian history; and finally, there’s always the prospect lingering in the back of your mind that you might strike it rich.

Of course, there’s the danger of contracting gold lust– akin to getting a big random win on the pokies, then devoting every living minute to getting another one. The difference is, you can actually see the gold or gems glistening in the pan or sparkling on the ground, making it quite a magical experience. For the vast majority of people however, it’s not going to make you rich, or even cover your expenses. But it can be a very enjoyable way to while away time in spectacular surroundings.

Also, remember to take care. Some of the roads to these locations are well off the beaten track and can become quagmires if rain starts to fall. Recently, an elderly man died and another was taken to hospital after their 4WD became bogged in a valley during a prospecting trip near Euriowrie, about 70 kilometres north of Broken Hill. 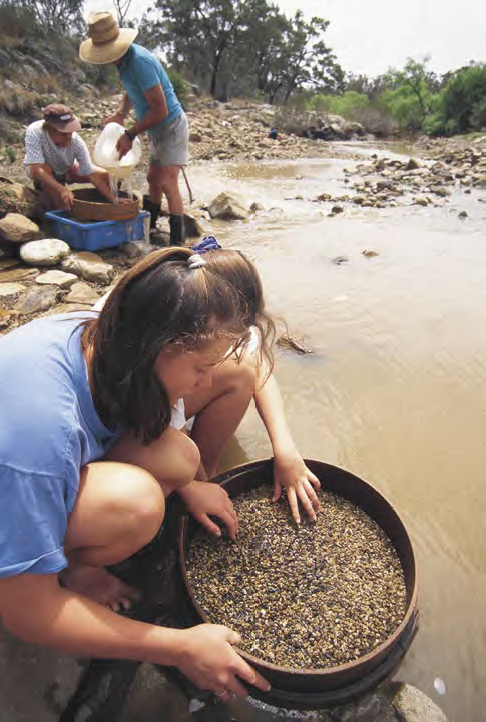 Panning for gold on the New England tableland. Tourism NSW

In the early days of the colony – particularly in Macquarie’s time – there were many rumours of gold discovery and geological indications of areas where gold might be found. These were supressed by the Governors out of fear it could lead to mass desertions by the soldiery and mass escapes by the convicts, as well as concerns the gold might not benefit new construction in New South Wales because it could be simply whisked away to Britain. This thinking said it was better to wait until the colony had more control of its resources.

But by 1850 everyone was keen for gold to reinvigorate the new society, and draw it away from its convict roots. The first gold was officially discovered near Bathurst in 1851 by Edward Hargraves, who had been searching for a chance to win the £10,000 prize on offer for finding a workable site. Although a mere five specks, it was enough to transform the country.

From its modest beginnings, Bathurst delivered an incredible 26 tonnes of gold in 1852. Victoria ran its own competition to prevent its population joining the gold frenzy in NSW, by offering £200 for any gold found within 200 miles of Melbourne. Six months after the Bathurst find, gold was discovered at Ballarat and shortly after at Bendigo.

Then deposits were discovered in Western Australia in the early 1850s; Queensland in 1853; the Northern Territory in 1865; and Tasmania, at Beaconsfield in 1877. Victoria contributed more than one third of the world’s gold output in the 1850s.

It also transformed the economy and hastened the advent of railways and the telegraph. 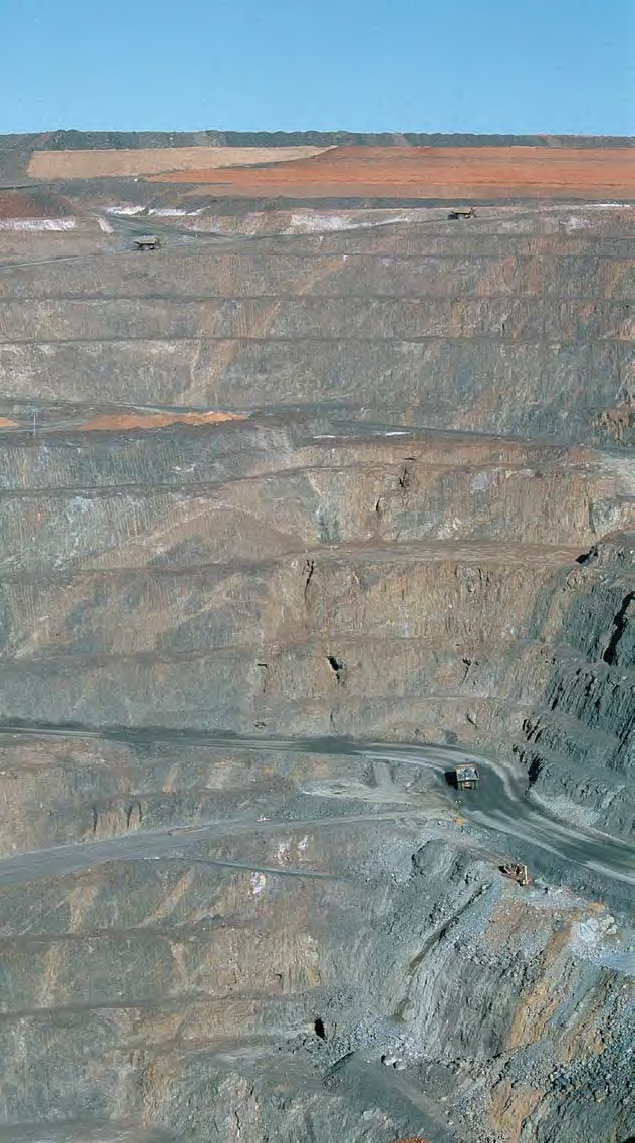 You can relieve the gold rush days by following the newly established Gold Trails (www.goldtrails.com.au). This is a website (and also a smartphone app) that helps you discover the New South Wales towns that were at the heart of the gold rush. These include places such as Tumut, Yass, Forbes, Goulburn, Grenfell, Gundagai, Harden, Hill End, Junee, Ophir, Parkes, Sofala, Temora and Lambing Flat. 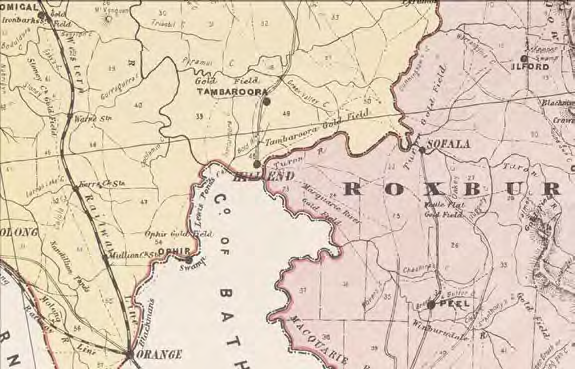 There are a number of places where fossicking is encouraged – and the website has a link to guidelines about fossicking. As a general rule, fossicking can take place on any land, provided that permission has been obtained from the landowner or land manager, except in national parks where fossicking is prohibited. To fossick in state forests you need permission from Forests NSW, in the form of a special purpose permit.

One fossicking business is the Three Creeks Tourist Mine at Upper Bingara, not far from the lower tablelands township of Bingara. You can try your hand at gold panning, panning for garnets or sieving  for perfectly formed quartz crystals. And of course, you keep what you find.

Bingara is on the Fossickers Way, a trail leading from Nundle to Glenn Innes via Warialda. As well as giving you the chance to find some gold or gems, it’s a beautiful part of the country, especially if there has been some rain over the season to green it up. 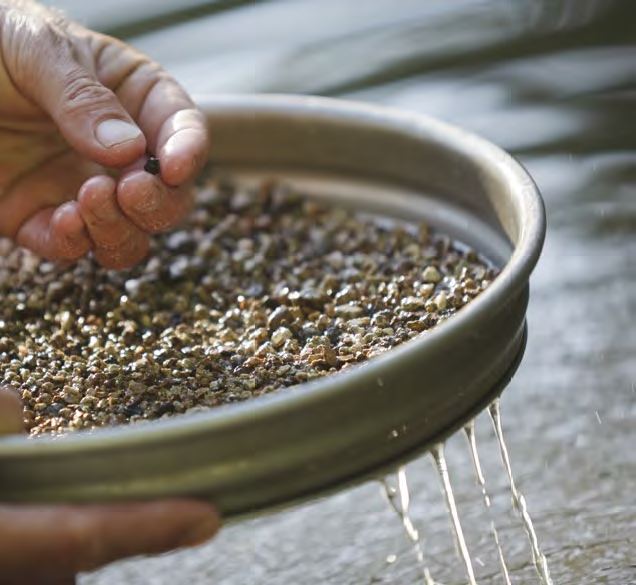 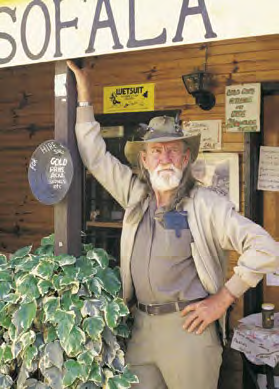 Sofala, the heart of the historic gold trail. Tourism NSW

But fossicking is not just about gold: you can also noodle for opals.

Fossicking around the NSW town of Lightning Ridge is mostly carried out by searching through the mine overburden dumps, as most miners disregard or miss smaller opal pieces. These small pieces may not be commercially useful, but can be good for hobbyists.

Truckloads of tailings are regularly dumped on top and if you see ‘potch’– the dark glassy looking material – that is a sure sign that opal fragments will be in there somewhere. Noodlers (opal fossickers) will rush up on such mullock heaps and it can be quite competitive.

Another famous site for noodling is Coober Pedy. More than 97 per cent of the world’s opal comes from Coober Pedy and Lightning Ridge – the vast majority coming from the South Australian town.  Here you can try your luck at noodling at various spots around town; get a great insight into the history of Coober Pedy at the Old Timers Mine and Museum or Umoona Opal Mine and Museum, and buy up big at more than 30 shops.

Town tours feature underground homes and opal mines, art galleries and natural landscapes including the Painted Desert, the Moon Plain and the Breakaways. These desert locations have attracted film makers from around world for movies including Fire in the Stone, Mad Max: Beyond Thunderdome, Ground Zero, Pitch Black and Red Planet.

You can tag along with the famous Outback Mail Run to Oodnadatta and William Creek, or join the nightly Star Gazing Tour on the Moon Plain.

Avoid Lightning Ridge and Cooper Pedy in the summer. They’re too hot. 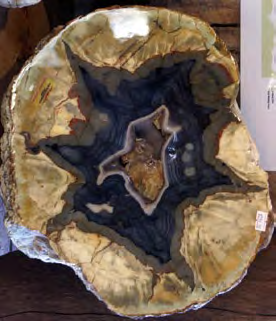 Sometimes it’s easy to tell what’s in the ground in Queensland by the name of the town, especially if you’re going to Opalton or Sapphire. 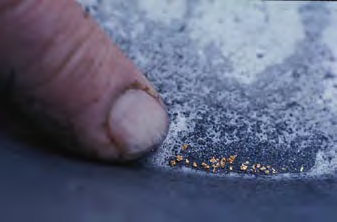 Opalton near Winton is renowned for opal fossicking, where you can sift through the red outback dirt for the dazzling glints of blue, gold, red and green. 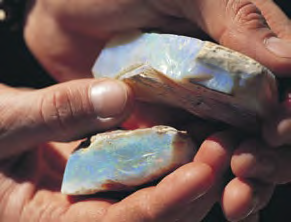 The largest sapphire fields in the Southern Hemisphere are around the towns of Sapphire, Anakie, Rubyvale and the Willows. Simply grab a pick and a pan and get going. Locals say that after this year’s rains, the blue and green sparklers are much easier to spot.

For something a bit different, Chinchilla is known for its red petrified wood, ‘Chinchilla Red’. Fossicking sites are located on the outskirts of town, so if you fancy a fossick stop by the Chinchilla Tourist Information Centre for a licence and directions. 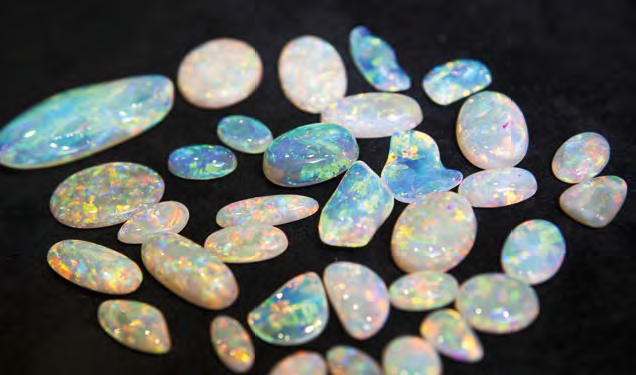 If gold’s your fancy, try striking it rich in the Deep Creek fossicking area near the Mary River – the site where a discovery caused the first gold rush in Queensland and the reason the town of Gympie was born. Here you can try your hand at panning for alluvial gold chips in the banks of the creek and have your very own ‘Eureka’ moment.

You can fossick for thunderbird eggs near the Gold Coast at Thunderbird Park. These solid or hollow agate, jasper or quartz geodes reveal a startling beauty once cut open. This is the world’s largest thunder egg mine. Armed with just a pick and a bucket, you can dig into prehistoric volcanic lava and discover treasure millions of years old in just minutes. Then you can cut them open with a diamond edged saw to reveal the beauty inside. 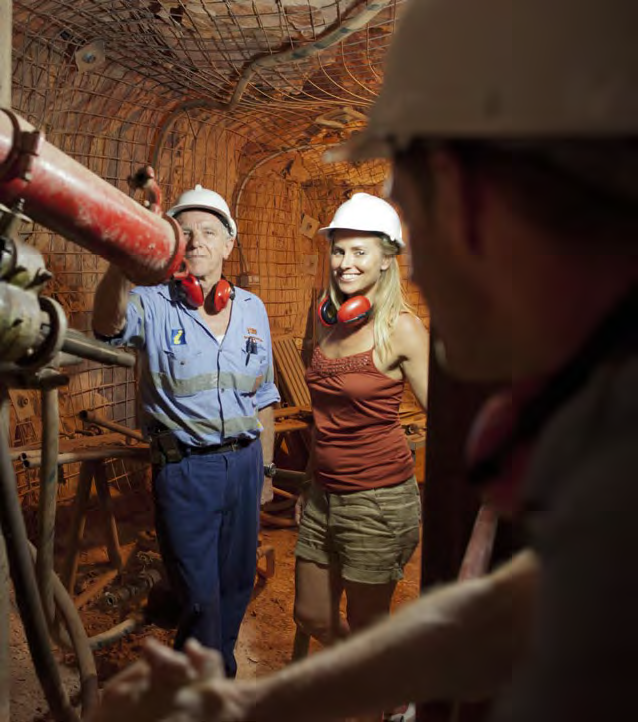 Across the border in the Northern Territory, Tennant Creek still relishes its history as it was once known as the Territory’s Heart of Gold. It was the last town in Australia to have a gold rush and hundreds of prospectors flocked from all over the country after the 1930s discovery. Today, there are plenty of opportunities to learn about the town’s historic attractions, including the Battery Hill Mining Centre, where travellers can join an underground tour and try fossicking for their own gold.

Also, you can go noodling with Gemtree’s tagalong tour to the Centralian gem fields, 140 kilometres from Alice Springs along the Harts Range on the Plenty Highway. 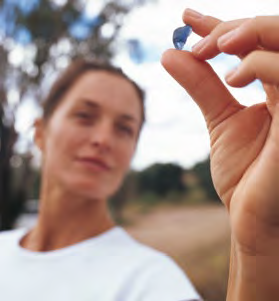 Kalgoorlie/Boulder offers a host of things to see and do for all ages and interests, such as discovering the past – which is always on show, from public buildings, pubs, cemeteries and houses in the suburbs to the many fascinating historic tourist attractions. Just walking down the streets will take you on a journey of discovery through more than a century of gold rush history.

But it’s not just history you can see. Mining is the largest industry in the region  and its presence is evident wherever you go. Today, gold is Australia’s third biggest export commodity and you can gain some insights into the region’s modern gold mining operations by taking a tour of the incredible super-sized Super Pit.

The Super Pit is Australia’s largest open pit gold mine, producing around 850,000 ounces of the precious metal annually. It has swallowed up all of the historic underground miles that once comprised the fabled Golden Mile. The Super Pit was the brainchild of Alan Bond and was eventually brought into being  by Kalgoorlie Consolidated Gold Mines (KCGM) in 1989. Today KCGM manages the mine on behalf of joint-owners Barrack Gold and Newmont Mining, and more than 1000 men and women are employed to operate the mine 24 hours a day, 7 days a week.

The pit is 3.5 kilometres long, 1.5 kilometres wide, and 400 metres deep – and counting. Since 1989, the Super Pit has produced over 13 million ounces of gold. When added to the output of the Golden Mile mines that it has replaced, over 54 million ounces have been produced by this extraordinarily rich ‘patch of dirt’ since mining began in the mid-1890s.

Today, the Super Pit is the most visited attraction within the Goldfields.

History can be re-lived in Australia’s foremost outdoor museum, Sovereign Hill in Victoria. This town re-creates Ballarat’s first ten years after the discovery of gold in 1851 when thousands of international adventurers rushed to the Australian goldfields in search of fortune.

By day, Sovereign Hill is where Australia’s history comes to life. It’s just like stepping back in time – from the  hustle and bustle of Main Street where costumed ladies and gents parade their new-found wealth, to the excitement of the Red Hill Gully Diggings where you can pan for real gold and it’s yours to keep.

At Sovereign Hill, you can see a spectacular $100,000 gold pour, venture underground on a fully-guided gold mine tour or catch a horse-drawn coach and tour the town. 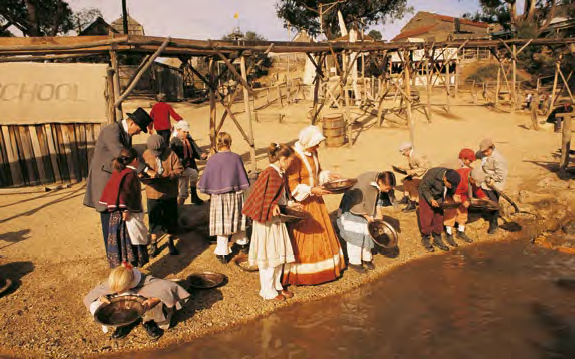 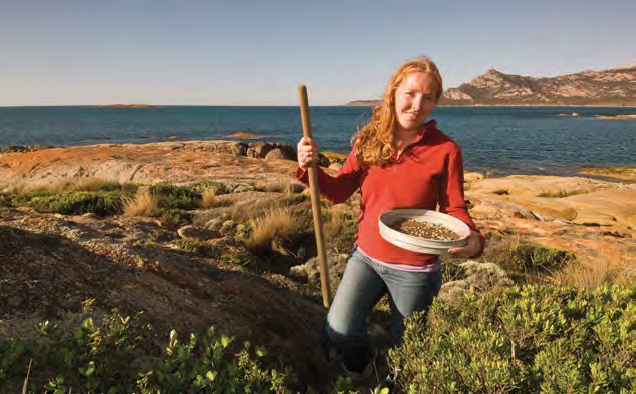 Further south is Flinders Island, the largest of 52 islands in the Furneaux Group off the coast of Tasmania. It is also the home of the Killiecrankie Diamond, which is actually a semi-precious topaz. The best places to look for these beautiful diamonds are in Mines Creek and Diamond Creek.

Killiecrankie diamonds can occur in a wide range of colours and the ones found on Flinders Island are clear, ice blue and pink gold.