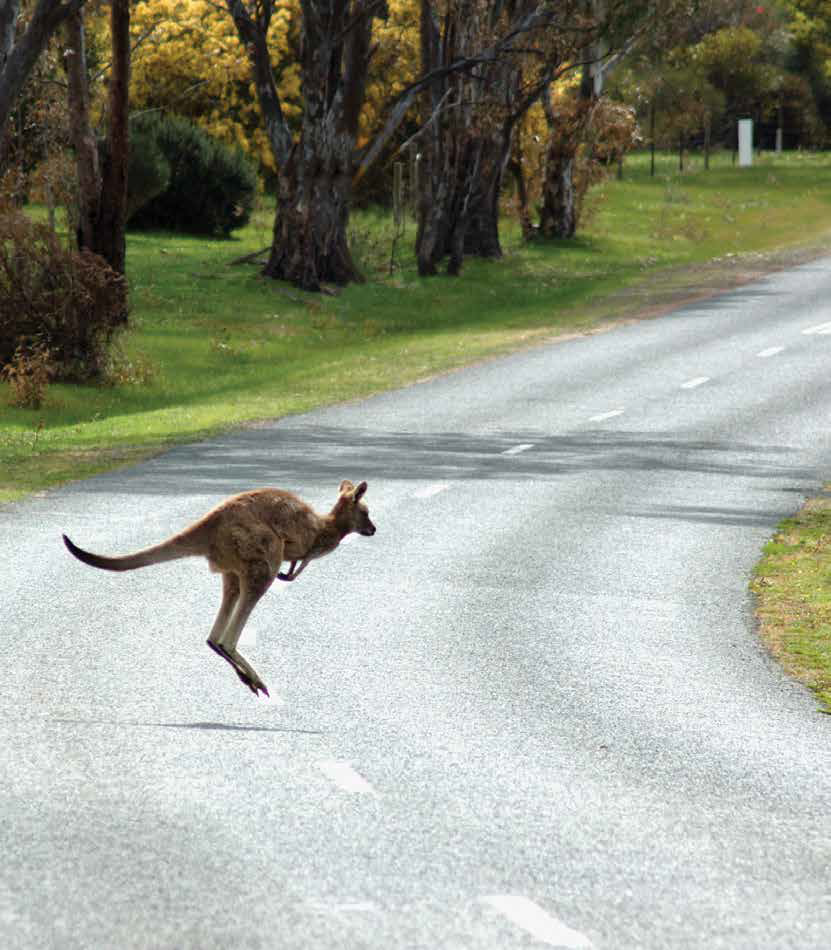 When we drive distances, particularly on country roads, the risk of animal strike is real. The NSW Road Safety Authority tells us that one in every 41 casualty crashes on country roads involves a vehicle hitting an animal. The ABC reported that in New South Wales over a 10 year period, more than 5,000 road accidents in the state involved animals. On a conservative estimate, 17,000 people were injured in these accidents and 22 killed, and about 60 per cent of the animal-related road fatalities were reported to involve kangaroos and wallabies.

But there are things we can do to reduce the risk. These measures start with taking the time to understand how species behave, so that we can reduce the circumstances in which we might find ourselves sharing the road with them. It also helps if we hone our driving skills, and adjust our behaviour to avoid accidents. So here are some of our top tips for keeping wildlife aware and road safe.

It’s obvious animals are harder to see at sunrise and sunset, and it doesn’t take David Attenborough to know that, in arid areas, those places that have a reliable water source, act like magnets to wildlife. It’s little surprise, either, to learn that many animals – whether native, or introduced like deer and livestock - have little road sense. When we venture into their backyard along our highways and byways, animals are likely to be either blinded by our driving lights as we approach, or they simply fail to associate our vehicle with danger – particularly if our rig is relatively quiet. Combined, these factors make it pretty obvious that driving at dawn, dusk or during the night – and particularly around semi-permanent or permanent water sources – increases our risk of animal related accidents. And watch out too for areas where there is obvious ‘green-pick’ along the verges, and in storm drains, that can be enticing for hungry roos and the like.

Another important way to prevent roadkill is to avoid throwing food out the window. This problem was highlighted earlier this year when the motorists lobby in Tasmania launched a campaign to reduce the incidence of roadkill in the state. Dubbed the ‘roadkill capital of the world’, the Apple Isle has some of the worst roadkill stats around. Apparently one native animal is killed on Tassie roads per resident each year – that’s more than half a million per annum. By not throwing food onto the road, it’s hoped that fauna won’t be so attracted to the road side – particular carrion eaters – which in Tasmania includes Tassie Devils, who are already up against the wall with facial tumours. But, on the mainland too, it makes sense to avoid littering the roadside with food scraps. In places such as the Savannah Way, for example, road-side feeds can attract bird strike from some of this country’s largest non-unionised feathered natives.

Ultimately, whatever the circumstances that lead to our path being blocked by a furry or feathered friend, there is one clear ‘golden rule’ to guide our response. Don’t swerve because it’s not the animal which causes the most deaths and serious injuries on our roads, it’s the trees that drivers hit as they swerve to avoid them and lose control. So, maintain your line when braking to maximise their effectiveness. And realise that, in most instances, striking a small animal may risk your panel work, dent your ego, and ruffle your sense of equilibrium – but it won’t hurt you or your crew. Of greater concern are larger animals – big roos, emus, deer, and livestock – where the real risk exists of wearing the beast on your bonnet if you don’t pay adequate attention. While it’s not an everyday occurrence, there are enough reported instances of drivers and passengers dealing with a wild animal landing in their lap or on an adjoining seat. And some of our fellow travellers have not survived to tell the tale.

University studies show our reaction times peak at the age of 24. After this time, our response times begin to decline. So, give yourself adequate time to see risks on the road as you approach them – and respond in time to reduce the likelihood of accident. Consider fitting a bull-bar which meets Australian standards and design rules, and that is designed to deflect animals away. High-end mainstream bull-bars cost what they cost - not because you’re being ripped off, but because of the work that goes into them from concept, design, proofing, and manufacture.

You can also buy sonic animal guards that we’ve had stuck to our tow-tug and the daily commuter for the last ten years. You’ve probably  seen these devices in your local auto shop or service station. They come as a pair in an unassuming blister pack and cost around six to eight dollars a pair. They don’t need batteries or electricity because air flows through and over the device to emit an ultra-sonic noise that’s not audible to human ears (somewhat like a dog whistle, which can apparently be heard by kangaroos and other kerbside furry dwellers). An alternative product like ‘ShuRoo’, which electronically creates a pattern of high-frequency sound, will set you back about $549. There’s a lot of debate about the efficiency of these sonic devices. The day after we first fitted sonic animal guards to the Hilux, we saw roos on the nature reserve next to the road turn their heads and bound in the opposite direction as we approached. The same happens to this day, while my neighbour continues to bounce roos off his bonnet every three months or so. It’s always hard to gauge the effectiveness of preventative measures. But for just six to eight dollars, you don’t need to think very deeply about buying a pair. 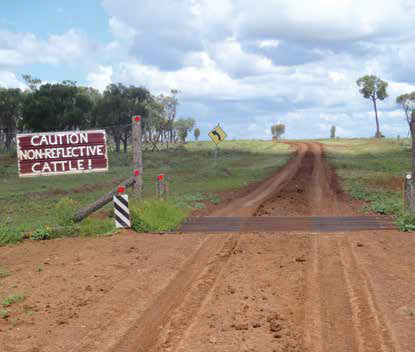 DEALING WITH THE AFTERMATH

If you do strike a creature, it bodes the question, do you hop out of the car to respond, or leave it road side? The basic rules are this, for a smaller critter, Wildlife Victoria recommends that, where it’s safe to do so, use a towel or blanket to cover an injured animal, pick it up gently and firmly, and place it into a well-ventilated box for transport. The animal is to be kept warm, in a dark and quiet environment (not in the car boot) and no effort should be made to provide food or water.

For larger animals, handling is likely to pose more danger than is reasonable for us to take. So, can we stay with the animal until a volunteer arrives, or not? It’s certainly a hard decision to leave an injured animal in pain and unattended. If instead you choose to put an injured animal out of its misery, consider first whether you have the knowledge and capacity to instantly render the animal insensible to pain. If not, you’re probably operating outside of the law relating to the humane destruction of animals. If the creature is dead already, then take the effort to pull it off the roadside about 10m or so (use your winching gloves to avoid ticks and smelly hands). If not, it may pose a real risk to other drivers, particularly at night, and may prove fatal to motorcyclists. It may also entice wild dogs, pigs, Tassie Devils, and Wedgies, which may perpetuate the animal strike problem at the scene even further. 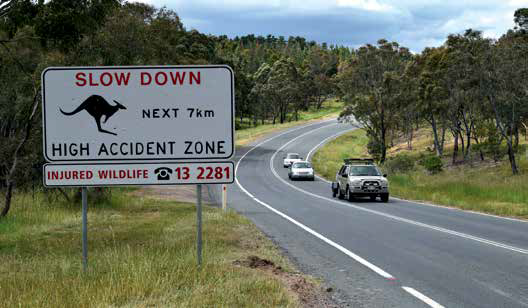 Pay attention to signs that alert you to high risk zones