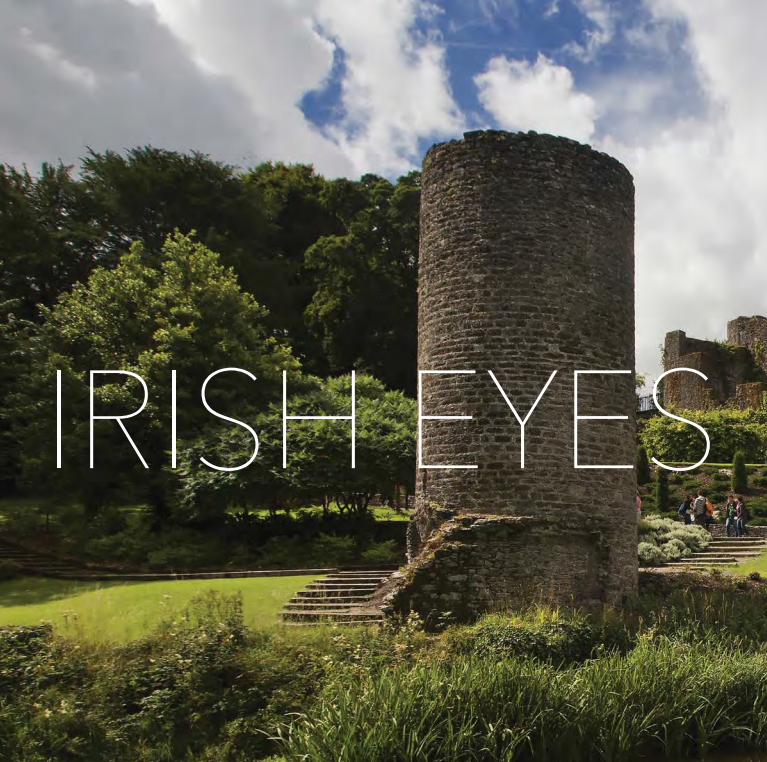 Having risen when the hotel alarm sounded at 3.30am and flown from Liverpool’s John Lennon Airport into Dublin, we were grateful to be met by a welcoming representative from Bunk Campers. After completing the neccesary paperwork and familiarising ourselves with our hire camper we felt quite tired when we eventually hit Dublin Town.

But we couldn’t give in to tiredness as it was the Bloomsday Festival and the city was buzzing with activity. Bloomsday celebrates Irish novelist James Joyce. People were dressed in period costume, Joycean music was being played and extracts from his book, Ulysses, were being read and lectured on all over the city. There was nothing like a bit of fresh culture and a great party atmosphere to banish the sandman.

Compared to our Talvor, the Bunk camper was small but we slept well that night at Camac Caravan Park. We soon discovered that all the caravan parks in Ireland are set out in a similar style with stone areas and grassy borders divided by low hedges. Although there were always plenty of toilets, shower cubicles were fairly scarce and nowhere did we find showers included in the overnight price. Save one site, showers were always an extra, operated by a token in a slot. In Killarney the slot was located outside (in the cold) so you lost time rushing back into the cubicle to remove your clothing.

As Michelle Obama was visiting Trinity College the following day – while her husband was in Belfast – my husband George thought it wise to quit Dublin sooner rather than later. Our intention was to travel down the coast through its tiny villages but TomTom had us on the freeway so that all we could see were high hedges lining the road. Eventually we managed to break away from the freeway at Carlow.

After a quick glance at Carlow’s Huntington Castle we stopped at nearby Altamont Gardens, which were amazing and free of charge. It was a very beautiful place covering several acres where we enjoyed walks around the lake and along the River Slaney. Later, just east of Carlow, we found the Browneshill Dolmen which is an ancient Megalithic Pedestal Tomb. It’s thought that the capstone on this tomb is the largest in Europe, weighing an estimated 150 tonnes – positioning it would have been an engineering enterprise in 3000BC.

Reaching Waterford at peak hour unfortunately meant we couldn’t visit the historic part of town. We were not prepared to submit ourselves to traffic stress and with no caravan parks nearby, we had to drive 45 kilometres to Clonea where we found a park overlooking the beach. We usually love beach walks and splashing about in the shallows but after only a few moments paddling, our feet were numb. It was a cool evening so we were stunned to see people going in for a swim.

The next day was a sunny one and we revelled in it. We soon found Ardmore Abbey and its well preserved 12th century round tower. We also saw the Ogham Stones (the remaining two of three carved and inscribed ornamental standing stones) and the tomb of St Declan. Declan was said to have brought Christianity to Ireland even before St Patrick.

At Youghal, the free museum taught us a few things about Sir Walter Raleigh who allegedly introduced the potato to Ireland here after a voyage to the New World. He was mayor of Youghal between 1588-9 and lived in a house, Myrtle Grove, next to the church. The knowledgeable volunteers in the church explained the history and significance of this ancient structure dating back to the 13th century. They said that Raleigh, having been sent to Ireland to quell the Desmond Rebellion was credited with changing the religion from Roman Catholic to Protestant in this area. Youghal was also used by John Huston as the setting for New Bedford in the 1954 movie Moby Dick starring Gregory Peck. We found Youghal a most interesting place.

Next we stopped to look at Cobh (formerly Queenstown) which is the last port the Titanic departed before meeting her fate. St Declan’s Cathedral dominated impressively from the hill overlooking the bay but it was not very old compared to some we had seen – a rather spritely 144, being built in 1870. Of course just about everything is older than what we can find in Australia, but we laughed at ourselves now judging whether something qualified as ancient or not.

We drove on to Cork but again couldn’t find parking so made our way to Blarney. This meant we could be at the famous castle bright and early the next morning. Blarney’s cute village square with its huge woollen mill store entertained us for quite some time and we couldn’t resist making some purchases. The caravan park here even had a laundry and was the only time we enjoyed free showers. To top off the positives, the Wi-Fi (often promised but rarely functioning) even worked here so we loved it.

I was first up to kiss the Blarney Stone next morning and hoped that, as the legend foretells, from then on I would no longer have trouble finding my words. The castle was amazing with many strange features such as the Oubliette. Its design was simple but devious. Visitors used to climb an entrance tower and if they were not welcome, the stone at the entrance would tip and send the unfortunate soul to oblivion in a pit below.

The grounds and gardens were lovely with magical nooks and crannies with evocative names such as the Rock Close, the Fairy Glade, Druid’s Circle and the Witch’s stone. 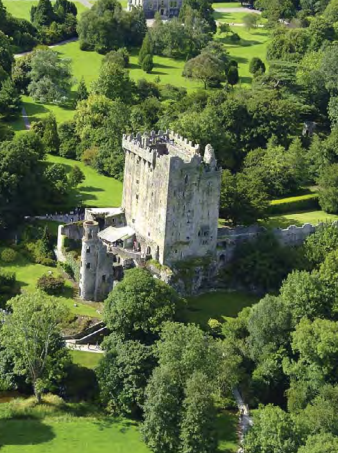 We enjoyed lovely walks along a brook, past some caves in the cliffs, and through the Poison Garden, passing an impressive Gothic mansion along the way. We eventually arrived at a side garden where the terraced beds featured huge pairs of eyeballs seemingly watching you. Blarney Castle was a very special place.

Next on our agenda was Kinsale, a pretty seaside village that has the impressive Charles Fort to visit atop nearby cliffs. Driving up to the fort on very narrow roads, we met a truck coming the other way. It was so narrow that it felt like the wheels would surely scrape the gutter. We were glad that we didn’t have our Talvor here as there was no way we could have managed on tiny laneways originally designed for a horse and cart.

It seemed a long haul to Skibbereen where we finally pulled up for a late lunch. Another long drive, along mountain roads with very rugged scenery and occasional ocean glimpses, eventually delivered us to Killarney by 6.00pm. Although the light wouldn’t fade for several more hours, we felt tired and jaded. The timer on the showers here allowed seven whole minutes. Yay! 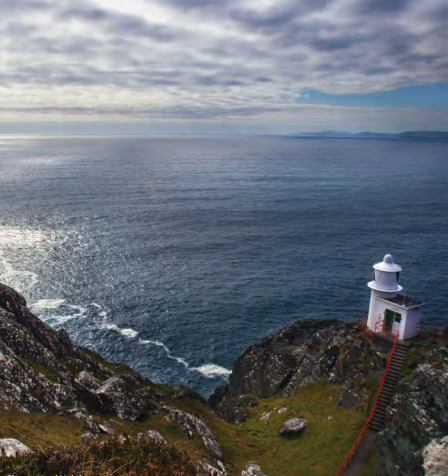 Killarney gave us a grey, damp day but the treasures we found there could not be spoilt by a little drizzly rain. The National Park contained beautiful grounds with a startlingly whitewashed thatched cottage tea room. Further into the park we found Muckross Abbey – more like a castle with so many rooms. Rides to the abbey were available in quaint ‘jaunting cars’ (horsedrawn carriages) but we felt in need of the walk.

Like many well-preserved historic buildings we’d visited, Muckross was a treat for photography with its carved stone arches and ornate framed windows. The tombs, the history and the gnarled old yew tree in the courtyard, together with the ancient architecture, all added a romantic ambience. Not far from Muckross, Torc Falls revealed itself as another treasure. Lilac rhododendrons bloomed in colourful profusion between the verdant ferns and mosses on cliff faces right down to the water’s edge. Among the lush foliage our camera clicked almost continuously as we soaked up as much as we could. Ireland touts the Leprechaun for tourists. Do they exist? If they did it would be in a spot such as this, we imagined.

The ferry crossing on the Shannon Dolphin was really smooth and landed us in Kilmer from where we drove to Kilrush for lunch. Here George photographed an electric car plugged into a public socket for a recharge. We had not seen anything like this before and were fascinated. We drove on to Ennis past gorse bushes with intense bright yellow tips. The multitude of hedgerows constantly drew our admiration at being planted to serve as lengthy borders. That night we nestled down at Galway Caravan Park, beachside, where again we could not believe people were swimming in the freezing-cold choppy water at 8.00pm.

We got up bright and early as we were heading out to see the Cliffs of Moher. The drive, which took almost two hours, proved quite stressful as the roads were again narrow and winding. Part of the footpath along the cliff was also extremely narrow so that walking in single file was the only option. It was dangerous to try to rush as you couldn’t steady yourself if you slipped – one side had a wire to keep the cows contained. A man ahead of us inadvertently grabbed the wire and alerted us to the danger when he jumped jerkily. Initially we hadn’t noticed the signs for the electric fence.

We walked for miles along the cliff tops (trotting behind hundreds of others) to reach the famous stacks where the puffins roost, though none came into view for us. As we walked back the sun finally penetrated the clouds and we watched delightedly as the ocean’s colour changed to turquoise.

We reached Galway by 3.00pm so it was not too late for a spot of shopping and admiring the Middle River – wide, swirling and very fast; three channels merge into the one right in the middle of town. Pretty flowers adorned the riverbanks and hung in baskets and flower boxes along all the sills in town.

Finally, we visited Galway Cathedral with its splendid stained glass windows, where we lit votive candles before turning in for the evening.

The morning brought our last day motorhoming in Ireland so we rose at 6.00am. We arrived at St James Gate, home of the Guinness Factory. The self-guided tour was superbly presented. It was easy to understand why it’s considered the most popular tourist attraction in Dublin. The displays are set out over seven floors, spiralling up the inside of a structure constructed like the largest Guinness glass ever. On the top floor you were given a pint of the good brew; which takes two minutes to pour correctly. George was delighted to see what was being shown on the large television screen. So, with Guinness at hand to enjoy with lunch of beef and Guinness pie, we watched the British and Irish Lions play the Wallabies direct from Suncorp Stadium. The Guinness helped allay the disappointment of Australia’s loss.

We were now running short of time to return the motorhome but we managed to fi nd a car park so we could visit Trinity College. Feeling that joining a guided tour would ensure us entry to see the Book of Kells, we quickly paid our fees. Although we enjoyed the guide’s talk on the architecture and statues, the tour ended with him leaving us to join the long snaking queue into the library. It was extremely slow moving and, in the end, we had to settle for viewing the famous manuscript on Google. We would have attracted a parking fi ne and been late to return the van, had we persisted in the queue.

We managed to reach Bunk with five minutes to spare. The manager kindly drove us to the airport after we said farewell to our little Fiat that had served us so well.