Wartime aviation provided a solution in this loop antenna

I classify remote as being greater than 100km from the nearest transmitter. This essentially excludes VHF, FM and TV reception, although in certain circumstances, reception of these modalities may be possible at distances greater than this.

I intend to discuss reception of the much maligned and often forgotten MF (531-1602kHz) radio transmissions from AM (amplitude modulation) broadcast stations located around the country, mostly concentrated around the coastline (see Fig 1, map with AM broadcast sites in Australia, p57). When outback, these may be your only source of news and entertainment.

AM radio has been present in Australia since the early 1920s, but has declined in popularity in recent years; ask anyone less than 20 years old if they ever listen to AM or FM radio, and you will find only a very small proportion do. However, when you are travelling around Australia, as many of us do, it is generally possible to access the AM radio network with a little knowledge, a little skill, some technical aids, and sometimes a little perseverance.

Unfortunately, vehicle and even radio manufacturers often treat AM radio as an afterthought, and their radios are less than ideal in many cases. Under normal circumstances, an AM station of typical power(2-50kW) can be received up to 100-150km during the day via the directly transmitted ground-wave, but at night, the radiation from the transmitter is often reflected from various layers in the ionosphere, such that a skip effect occurs; the signal is reflected from the ionosphere back to the ground, and  reflected from the ground again to the ionosphere, so that signals may be receivable on the other side of the earth under favourable circumstances.

The solar set-up and the MPPT regulator caused interference

This night-time effect may cause concentric circles of reception alternating with dead zones of silence from a particular transmitter, and often a transmitter heard weakly during the day becomes inaudible at night, whereas  a transmitter much further away may be heard quite loudly at this time, only to disappear at daybreak. The nighttime signals are subject to fading and enhancement on a variable basis. As a boy I was fascinated by the shortwave radio spectrum, where even with rudimentary equipment one could listen to all the foreign language programs at night. Shortwave transmission is now greatly  reduced due to the internet, but there are still some countries persevering with it, including Australia.

As I mentioned earlier, AM car radio technology is generally not considered a major priority by many automotive manufacturers. With the advent of vehicle streamlining the ubiquitous one-metre extendable antenna is now a thing of the past and car antennas are either hidden, or very short, and designed to be usable for FM transmission.

This, by its very nature, is useful only for local reception and the received signals tend to be quite powerful due to the directional nature of the emitted signal, which means that the FM receivers in the cars can be relatively insensitive. The consequent shortness of the shared antenna impacts severely on AM reception. Since within car radio receivers the AM and FM portions are part of a common circuit the AM receiver performance may be abysmal compared to car radios in the past when FM radio did not exist (prior to 1974).

My wife Linda and I purchased a new motorhome a year ago (Stan the Van). This had an aftermarket entertainment system fitted by the manufacturer as part of the build on the Iveco chassis). The antenna on the roof was a 50cm spiralwound antenna, which had a preamplifier (booster) in its base to make up for the lack of antenna length. As a rule this is bad practice, as the preamplifier is often overloaded by local high-power FM signals and causes consequent AM signal distortion.

As a general rule, the more ‘metal in the air’, the more signal pickup by the antenna. Subsequent amplification of that signal is generally an inferior solution to metal in the air. An antenna preamplifier is generally only of use when the received signal is inadequate, and the accompanying atmospheric noise is low, as  such an amplifier will amplify both equally. A preamplifier may be deleterious, as it may overload the receiver. Much careful thought is needed in the design and application of small signal preamplifiers.

At the dealership where we picked up the vehicle, the FM reception was tolerable, but the AM reception nonexistent. I thought that this might be due to a paucity of AM stations in the area, but as we drove home on our first trip, we got to be 2km away from a 50kW AM transmitter before there was any reception, and that pretty faint. It was obvious that the radio worked, but reception on AM and FM was below acceptable standard, after consulting the radio manufacturer.

Loop antenna as yet does not rotate

This pointed to either a very poor antenna, or else a faulty connection between the antenna and the radio. In  the end, it turned out to be the latter, but there was a faulty connection at the antenna input to the receiver, and in the cabling connection to the antenna mount. Due to the frequencies involved, VHF (FM) signals are transmitted across a low capacitance break much better than MF signals. Repairing both of these defects, and testing the receiver with a calibrated signal generator, confirmed that sensitivity was within specification.

But I wanted more, much more, much to Linda’s despair. I am a licensed radio amateur of 50 years duration and I have played with radios almost all my life. One can always improve something. I have made many antennas over the years for improvement of reception. Our place is covered with them, some of them successful, others waiting to be reborn as other projects. In the city, signal strengths  are excellent, but the inverse square law of radiation intensity means that in the country signals need to be coaxed from the ether. Hence my modifications.

The problem with a mobile antenna is that you cannot follow the more metal in the air rule too freely, or you runs the risk of bringing vegetation, flying creatures, overhead wiring and low-flying aircraft with you, with unfortunate results, usually for the antenna that you have lovingly created, and secondarily, for the van.

When you’re is stationary, a good length of wire connected to the car antenna, insulated from the ground, and elevated (up in a tree), can make a major difference to your AM reception. Often problematic is the extraction of the wire once you decide to move on. In the last decade, there has been much work on small active (amplified) antennas with good large signal handling characteristics, and the antenna portion consists of a few square centimetres of metal plate. I have built several of these with good success.

The actual antenna is enclosed in 40mm PVC pipe about 15cm long, is completely weatherproof, and when mounted on the van, relatively inconspicuous. I mounted this at the back right corner of the van, to  minimise trees coming into conflict, and to separate it as far as possible from the inevitable digital electronics interference of the truck chassis. Interference, like the air we breathe, is everywhere.

Having installed some significant solar panels on the roof of the van, I duly noted the significant interference generated by the MPPT regulator, despite the fact that it complied with all the relevant requirements for such electronic devices. There followed a prolonged episode while I suppressed the radiation from the regulator, which initially conducted up to the solar panels on the roof, radiated and directly affected the active antenna.

I have not yet mentioned the scourge of the AM enthusiast: the massive amount of interference introduced by the digital revolution from devices such as switch-mode power supplies, inverters, TVs, mobile phones, fluorescent lights, LED light drivers, etc. In an urban environment, all these devices have made distant shortwave radio reception almost impossible, although there are some workaround partial solutions. Having coped with that, electrical storms can obliterate reception of all but very local AM stations.

Out in the bush, your neighbours may create reception difficulties with such  devices; distance yourself from them if this is a problem. For good measure, I removed the previously mentioned installed antenna and installed a loop antenna on the van roof derived from wartime aviation usage, which I just happened to have. It too has a preamplifier which I constructed.

The whole roof collection of antennas

This antenna is less susceptible to impulse noise, (ignition, powerlines, etc.) than the other pipe antenna and has directional capabilities, although it is not rotatable in its current situation.

We did go away around central NSW in Stan for a shakedown cruise last year, in preparation for a more major sortie to Queensland in July. I have tested my systems and am confident of their function, although a low-flying bridge might wipe the antennas off the roof. Reliability is always a problem, as conditions are harsh out on the road, but I have my trusty soldering iron, and replacement semiconductors, (close lightning is very good at destroying preamplifiers), a transistor radio – if all else fails – and a HF transceiver with all band coverage. As I constantly tell Linda, one cannot have too many radios or antennas. As for Stan’s appearance, beauty is in the eye of the beholder. 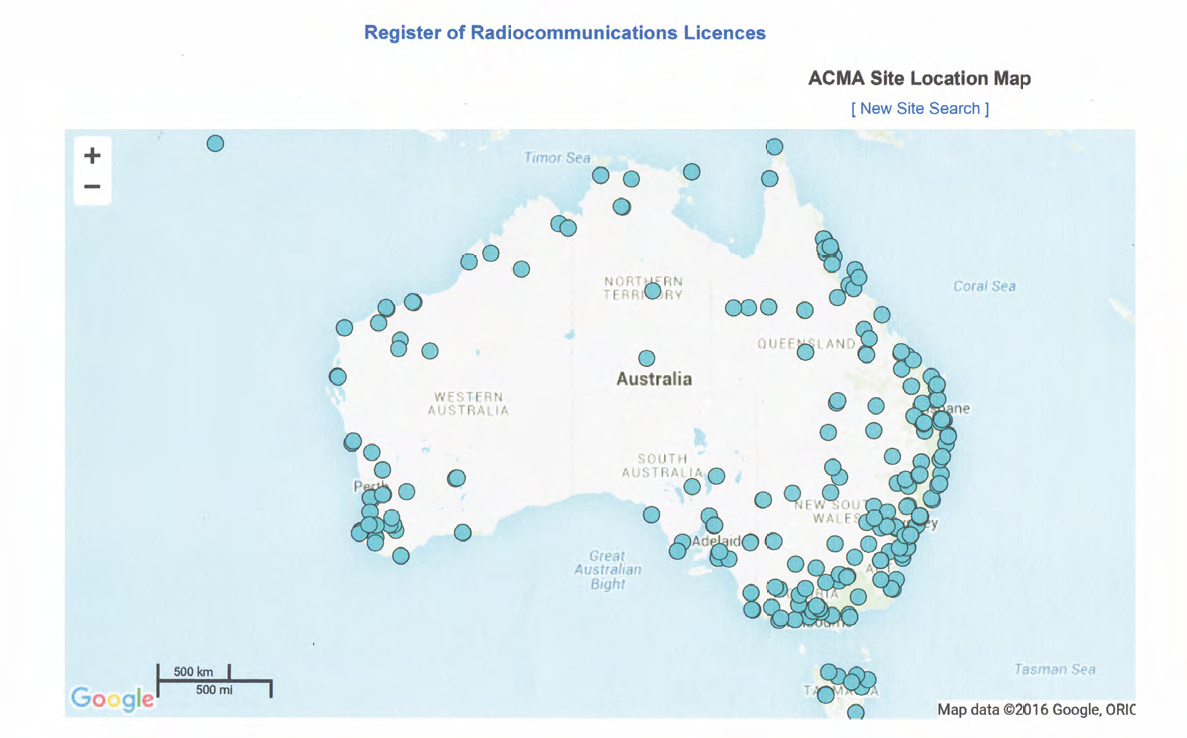