Easter, which celebrates Jesus Christ’s resurrection from the dead, is one of Christianity’s most important holidays. It has been called a moveable feast because it doesn’t really fall on a specific date like most holidays. Instead, Christian churches in the West celebrate Easter on the first Sunday following the first full moon after the vernal equinox. Therefore, Easter is observed anywhere between March 22 and April 25 each year.

In addition to Easter’s religious significance, it also has a commercial side, as evident by the excessive amounts of chocolate bunny rabbits and marshmallow chicks that appear in stores each year. As with Christmas, over the centuries various customs and pagan traditions have become a standard part of this holy holiday.

Certainly, we are not complaining; there is nothing better than a day dedicated to eating chocolate. But, why do we do this? At what point did we decide that on Easter we would have egg hunts and hat parades? Surely these cannot be Christian traditions befitting the sanctified meaning behind Easter?

Many Orthodox Christians insist Pascha or any derivative of the word Passover is the only correct name for the celebration of the resurrection of Christ, and insist the word Easter is inappropriate due to its supposedly pagan origins. A popular belief is that the origin of Easter stemmed from the Anglo-Saxon goddess, ostre or Ostara (spelling may appear different depending on the origin of text). The Teutonic (German) deity Éostre was the goddess of spring and fertility, and feasts were held in her honour on the Vernal Equinox. Éostre’s symbol included the rabbit and the egg; the rabbit represented procreation (due to the animal’s high reproduction rate) and the egg symbolised the growing possibility of new life. For the northern hemisphere, Easter celebrations coincide with the beginning of spring and it is quite easy to see how many believe that this holy holiday may have in fact derived its name from a pagan belief. Supposedly, Easter celebrations were incorporated into Christianity by early Christians who celebrated the resurrection of Jesus Christ at the same time pagan worshipers were celebrating the bounty of spring and fertility in general.

So if this explains the bunny rabbits and eggs, why are they chocolate?

For Christians, Lent is the period preceding Easter where members of the Christian Church fast in honour of Christ. In the western church this period runs from Ash Wednesday to Holy Saturday which includes 40 weekdays. On Easter Sunday, Lent ends and celebrations take place; fasting has finished and an abundance of delicious treats can now be consumed. This could explain why chocolate is consumed on Easter Sunday, while eggs and rabbits exist due to Éostre.

In Australia many families spend the day with family and friends, giving boxes of Favourites and chocolate bilbies, but Easter celebrations are quite different depending on where you are in the world and in fact even Australia is looked upon as strange due to our chocolate bilby consumption. 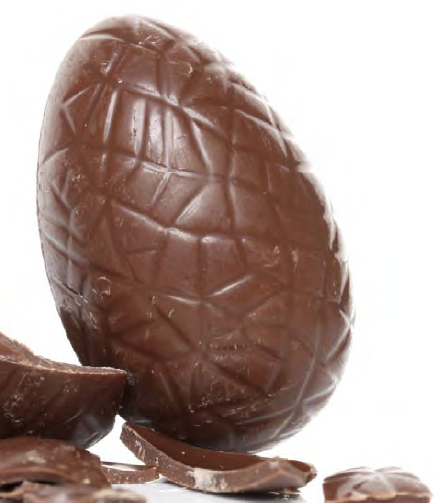 Apparently it is good luck to beat your wife or the girl you fancy on Easter Monday in the Czech Republic. Now, we are not talking about actually beating women, but rather tapping them with a pomlázka (braided whip); this act is not meant to cause insult but is a blessing - Pomlázka means ‘make young’. The idea behind the tradition is that anyone hit with the whip will be healthy and happy throughout the upcoming year. The pomlázka is made of willow and decorated with ribbons; according to legend, the willow is the first tree to bloom in the spring, so the branches will supposedly transfer the tree’s vitality and fertility to the women.

To show their appreciation, the girls present the boys responsibl for hitting them with Easter eggs. Easter Monday, often referred to as Whipping Monday throughout the Czech Republic, is an unusual Easter tradition and if you plan on visiting at this time of the year, be sure to watch your back!

Most meals enjoyed at Easter include scrumptious delights such as baked vegetables, an array of cooked meats and tasty sweets. And, while it is quite common to have butter on the table to accompany the bread, the Polish tend to take their butter decoration a little more seriously than most.

Baranek Wielkanocny is Polish for butter lamb, which is a slab of butted sculpted into the shape of a lamb. However, this is not just a decoration; Russian, Slovenian and Polish Catholics all consume this strange table decoration made completely of butter. The lamb sculpture must be consumed from the tail, leaving the head to last.

Now, we are all for the excessive consumption of chocolate at Easter, but indulging in a large slab of butter as well may mean a few extra trips to the gym to burn off those unwanted calories

In 1923 a publicity stunt gained more attention than expected when a publishing company advertised their new crime novel on the front page of local Norwegian newspapers. The advertisements resembled a news article so much that readers did not realise it was merely a promotional campaign. Since then, crime novels have been so popular over the Easter period that Norway has developed an Easter tradition where publishers actually bring out special ‘Easter Thrillers’ known as Paaskekrimmen each year. So if you find yourself in Norway at Easter time, skip hunting for chocolate eggs with the kids in Norway, instead bury your head in one of the many crime novels available at this time of the year and hunt for the ‘killer’.

The story goes that when Napoleon and his army were travelling through the South of France, they stopped in the Pyrénées-Atlantiques department in south-western France and devoured an abundance of omelettes. Apparently Napoleon enjoyed the omelettes so much that he ordered the townspeople of Haux to gather all their eggs together in the centre of town and make a giant omelette for himself and his army the following day. Today more than 4,500 eggs are used each Easter Monday to make an omelette large enough to feed more than 1,000 people. BYO fork!

Don’t be confused if you think you have skipped a few months forward somehow; although Swedish Easter celebrations are very similar to that of Halloween, there are still plenty of chocolate eggs to go around! According to the Swedish folklore witches are most active during holy times of the year; the old belief is that Easter was a time when witches flew to Blåkulla or ‘Blue Mountain’ (a fictional mountain) to make deals with the devil. From this ancient superstition a modern tradition has taken place in the form of a mini-Halloween. Each Easter, children dress up as witches with headscarves and painted red cheeks and go door to door with a copper kettle asking for treats. This usually happens on the Thursday or Saturday before Easter. Swedes also set ablaze enormous bonfires and fire crackers leading up to Easter Sunday to ward off witches on their return flights from Blåkulla.

There are many other beliefs and traditions supported at this time of year, and no matter what hemisphere you are located in, whether you are giving something up for Lent or not, whatever it is you call this time of the year – Easter, Pascha, or something completely different - it is the perfect opportunity to spend time with loved ones, celebrate life, and, well, eat chocolate!