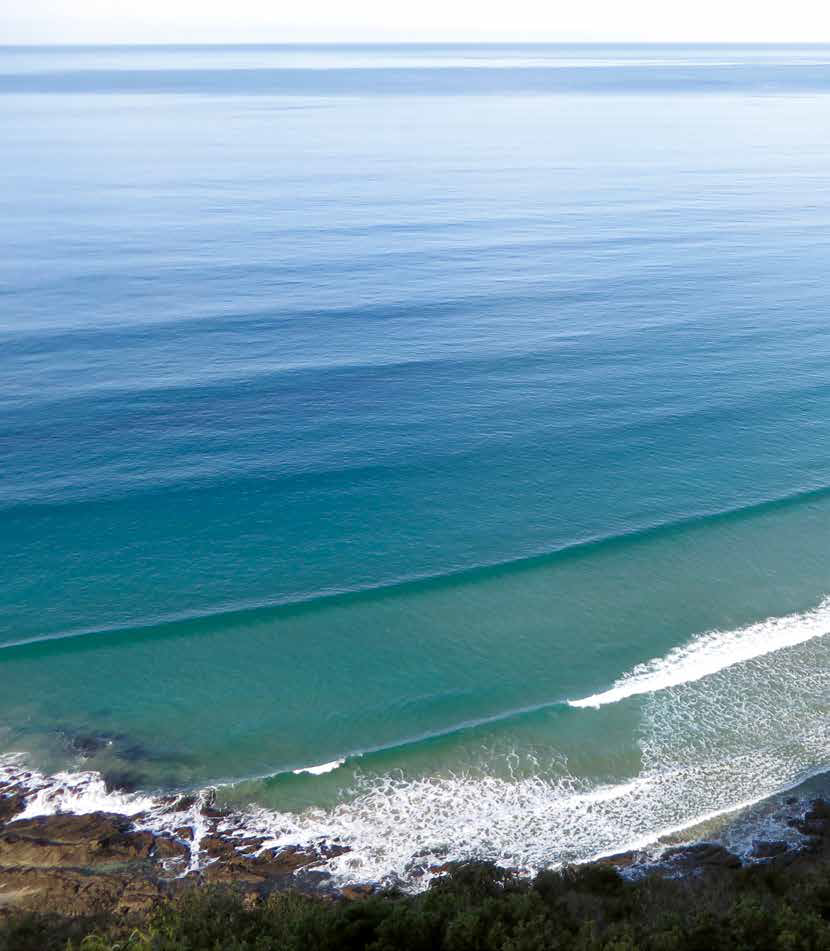 It was late on board the Spirit of Tasmania. We were passing through Port Phillip Heads bound home for Tassie. From our porthole, I could see the shore lights stretching west into the distance, reminding me of the places we explored during the past four weeks.

It started on this same stretch of water aboard the Sorrento-Queenscliff Searoad ferry, all the way along the Great Ocean Road, over the South Australian border and back.

The Great Ocean Road winds around the rugged coastline of south-west Victoria. Built by returned servicemen after WWI, this huge engineering feat ended isolation for coastal communities like Lorne, and today provides a tourist attraction like no other. Bus loads of tourists travel this road every day. We went in mid-winter.  From the numbers of overseas tourists you would think it was peak holiday season. 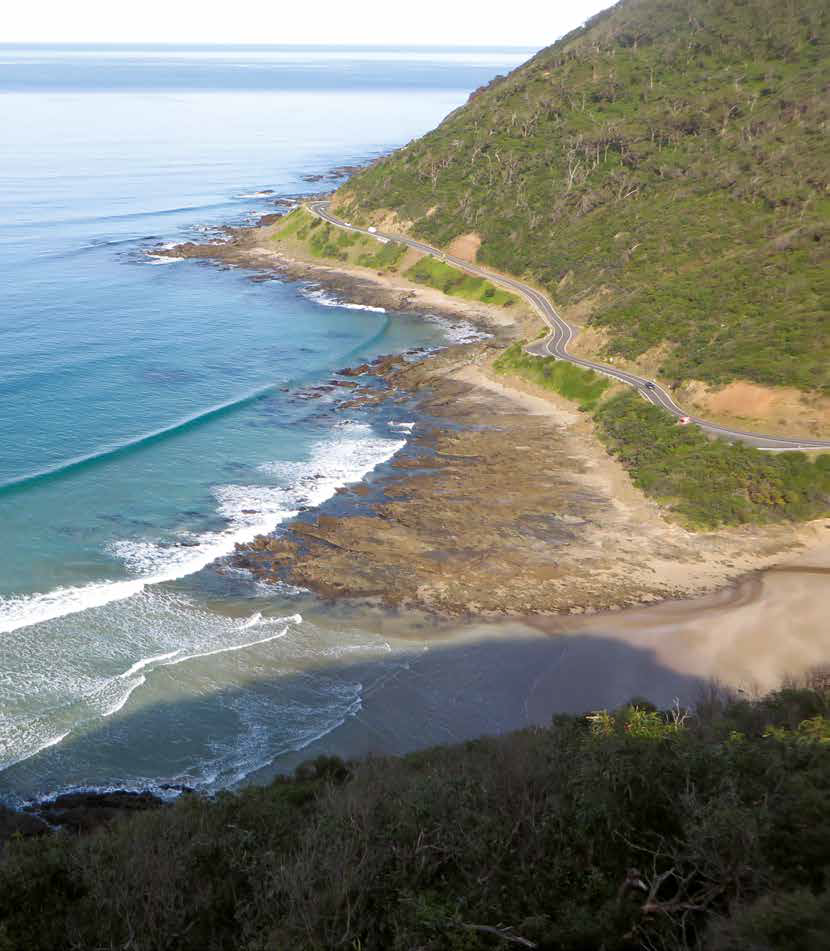 Lunch overlooking Port Phillip Heads and Bass Strait provided a good start, then a brief, historic walk around the Queenscliff. A Member Stop Over (MSO) offered a welcoming first-night stay for our holiday, thanks to our kind hosts in Drysdale. From the MSO, Port Phillip Bay was an easy walk, or so they said. We took the scenic route and eventually found a spectacular bay in the setting sun.

Heading west, we encountered many beautiful beaches in the built up areas. We stopped at Torquay, the world famous surfing spot Bells Beach (complete with surfers), and Point Addis. Between Bells Beach and Anglesea, we came upon a chocolaterie and ice-cream place,  where they really knew how to do ice-cream. We arrived at Lorne late in the day and headed inland into the Otways for the night.

Big Hill Campground was 13km up the hill. Right on top of the Otway Ranges at around 500m, it turned out to be a quiet, secluded scratching in the bush. It was a cool, damp night but we were snug and warm with our diesel heater going, although a few other campers had retreated to their cars. 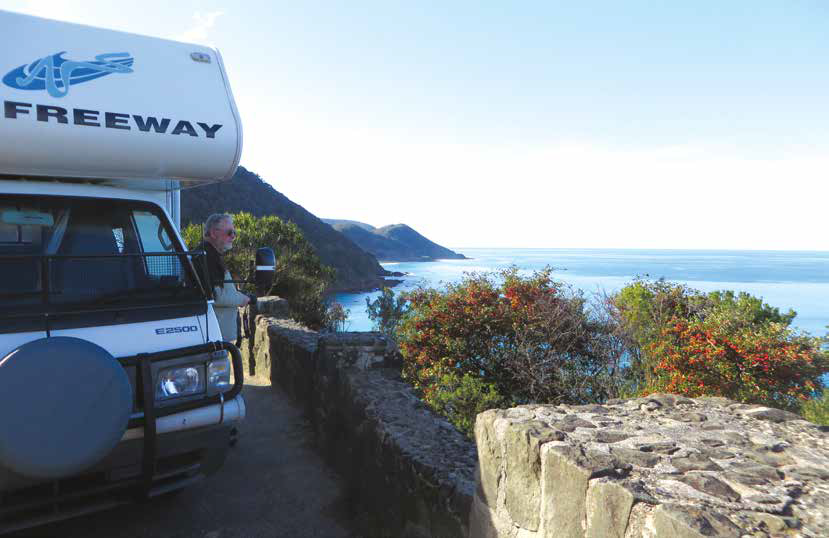 Sue and John stopped frequently on their way to Cape Otway

Lorne brought back memories of our honeymoon there 44 years ago. We particularly wanted to revisit Erskine Falls. The track to the bottom of the falls on our last visit had not been very obvious to us or others, so we descended monkey-like, from tree to tree. This time we took ‘the easy way’, via lots and lots of steps to the waterfall; it’s one of the best I’ve seen, and well worth the climb. Teddy’s Lookout back in Lorne revealed a glimpse of the steep, rugged coast, and road to the west. 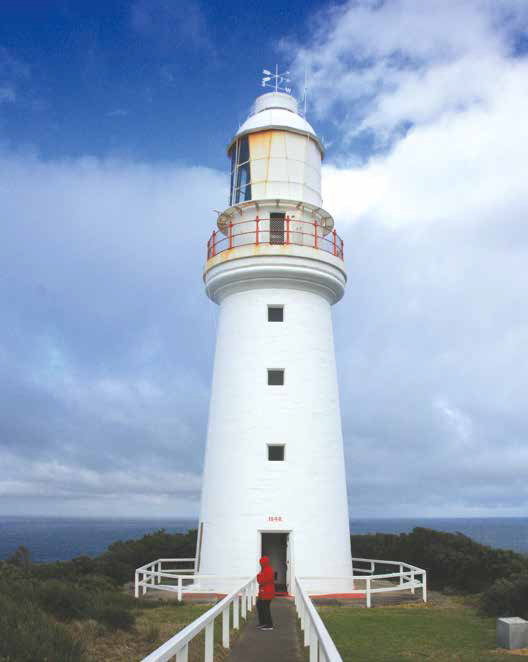 We passed through Apollo Bay on our way to Cape Otway pausing at as many lookouts and scenic spots as we could, staying at Bimbi Park at Cape Otway, a great little camp where you could hear the roar of the distant sea. There was a koala up a gum tree near our camper, and plenty of evidence of other wildlife around.

Cape Otway is a spectacular sight; even more so, if you arrive to see a whale breaching near the lighthouse as we did. The sea and wind always seem to build up around capes, and this one was no exception with lots of reefs just offshore, wild and windy.

Along this stretch of coastline is a huge walking track that took an effort to make, and looks a bigger  one to walk it! The dwindling 12 Apostles seem to be the star. The car park is huge, and was packed with overseas tourists in buses, cars and campers, and a few locals like us, during our visit. Helicopters were taking off and landing every few minutes on scenic flights over the coast. We were happy just to walk to the cliffs, jostle for a spot to take photos, and stare out in awe.

We reached Port Campbell late afternoon, camping at the recreation ground. Port Campbell is a narrow inlet, with a jetty equipped with a mechanical boat lift. The sea was really rolling in.

The coastal attractions are spectacular, sporting names like The Grotto, The Arch, London Bridge, and The Bay of Islands. The Bay of Islands boat ramp would have to rate as the longest, steepest  boat ramp you are ever likely to see – the sign said 4WD only; only the foolhardy would try with a 2WD. Skid marks on the ramp revealed retrieval attempts, a tricky proposition with a boat attached. It was a windy day, the waves smashing into the cliff faces, with spray flying through the air.

The gannet colony at Point Danger

In Warrnambool, there’s the whale nursery beach, where whales come in close to shore to give birth and stay a while. We spotted a mother and calf milling offshore on our first day, and a few more when we returned.

Our next overnight spot, Killarney, in the Belfast Coastal Reserve, was a peaceful little place near the beach; pick a spot, settle in, and your money will be collected later, with free washing machines thrown in.

Nearby, was an interesting place to spend a morning. Tower Hill was formed by a volcanic eruption  around 30,000 years ago. It filled with water then further volcanic activity formed the cone shaped hills and islands within the reserve as seen today, the outer crater being several kilometres across. We climbed to the top of one hill, where we heard, and saw, lots of emus grumbling their way through the bush, several koalas, and multitudes of kangaroos and wallabies. We didn’t know emus liked water. At Tower Hill Reserve several were paddling in the shallow lake.

Sometimes trips are planned, but all plans are subject to change, especially ours. After a phone call, a detour inland, a couple of weeks  later, and a whole other story, we rejoined the coast near the South Australian border heading east.

We were too late in the day for a tour of the Cape Nelson lighthouse, but the scenery was pretty awe inspiring. In Portland we found a free camp, this time in town. Portland is a surprising place, a smallish town but with a lot of industry. In the port, three ships were loading and more were waiting out in the bay, and huge trucks were lined up waiting to unload wood chips. A seal colony on the next point provided a striking contrast, with seals lolling around in the bay, one happily swimming through the port area, and a gannet rookery at the nearby Point Danger.

The Saw Pit Campground, on the site of an old saw pit, is located between Portland and Port Fairy in the bush, with lots of kangaroos, wild birds and a walk to Whalers Lookout overlooking the coast. It was a good place for a rest day, but the overcast weather and treeline provided no battery charge via the solar panels, though this didn’t stop the roar of the distant sea.

On arrival in Port Fairy, a market was in full swing in the main street. It was just what we needed to stock up on fresh fruit and vegetables. Back in Warrnambool, we happened upon Middle Island where Maremma dogs have being used since 2006 to successfully protect  the little penguin colony from dogs and foxes. The colony was nearly wiped out before the Maremmas started protecting them. The movie Oddball tells their story.

East of Warrnambool on the Great Ocean Road, there is a shortage of free campsites, which can impact your travels if you like to take your time. One place we missed on our way in was Loch Ard Gorge, so we skipped the heavily populated tourist spots we had seen, and went straight there on our return.

I am glad we did. Of all the places we visited on the Great Ocean Road, I think the Loch Ard Gorge was the highlight. It was the most moving, awe-inspiring place. It was named after the clipper ship Loch Ard, which was wrecked nearby in 1878. There were only two survivors who came ashore in the gorge. One, a young man, Tom, found his way out of the gorge to raise the alarm, saving the life of the only other survivor, a young lady named Eva. How he ever found his way out of the gorge is mind blowing. We did it the easy way, traversing a stairway to gain access to the beach. It is hard to imagine anyone surviving a shipwreck in such a place. Huge waves smashing constantly onto the sheer cliffs, and we saw it on a fairly calm day. Nearby, a small cemetery marks the resting place  of a couple of those who drowned in the wreck. The rest were never found. The stretch between Port Fairy to Cape Otway is known as The Shipwreck Coast, where there are over 600 known shipwrecks dating back from the 1800s.

After several hours at Loch Ard Gorge, and lunch at a beautiful spot near Princeton, we turned inland from Lavers Hill to see more of the Otway Ranges. It was 44 years since we last visited this rugged coast. One of the arches of London Bridge has fallen down, another of the Apostles has caved in and at least one other arch has given way in the Loch Ard Gorge area, giving rise to two pillars, named after those two survivors of the Loch Ard, Tom and Eva. The relentless action of the sea continues. I wonder how many more landmarks will be worn away by the sea in next 44 years?

The Great Ocean Road, VIC, is 244km, from Torquay to Allansford, near Warrnambool.

Torquay is 97km from Melbourne via Geelong or 47km from Queenscliff, from where Sue and John boarded the Sorrento-Queenscliff Searoad ferry.

Sue and John used the local visitor information centres for touring information and GeoWiki X and GPS for campgrounds, dump points and directions, which they cross-checked with Camps Australia Wide.

There are few free campgrounds east of Warrnambool on the Great Ocean Road; Sue and John stayed at Big Hill Campground, Bambi Park, and the Port Campbell Recreation Reserve.