A tyre seems such a simple thing that most drivers reasonably assume that a steered wheel causes the tyre and vehicle to follow the same path. They more or less did until 1888. Then a Scottish doctor named John Boyd Dunlop invented the pneumatic tyre. It was not until 70 years later that it was realised how complex they are.

Within reason a non-compressible tyre rolls in the direction it is pointed. If steered at the time, the vehicle follows the direction the steered tyre is rolling. Any strong side forces (such as a wind gust) will either not affect it – or will cause it to slide (but nothing in between).

A pneumatic tyre is very different. Weight on the tyre causes that part of the tread in contact with the road to form an elongated oval (more or less handsized) footprint. That footprint’s grip on a hard grippy surface is partly frictional and partly molecular.

When you turn the steering wheel (or exert a side force on a non-steered tyre) a turning force (called torque) acts on the wheel rims and base of the side walls. These in turn distort that footprint’s contact patch on the road such that there is an angular difference between where the car is steered and where the footprint is pointing. In practice a moving vehicle takes up a radius that is less than the steered wheel rims are attempting to impose.

There is a limit to the extent this can be done. The (misnamed) slip angle is a combination of tyre carcase flexing and footprint grip. On a hard, grippy surface once a road tyre’s slip angle exceeds about eight degrees, the footprint loses all grip and slides out of control.

This happens more suddenly with radial tyres than with the previous cross-ply tyres – but at higher cornering forces.

The extent of the slip angle is affected by many factors. These include the tyre’s construction, the lower its profile and greater its stiffness, the less the slip angle. The slip angle is increased by load and lateral forces but the relationship is not linear: unlike normal friction, as the mass on the tyre increases, the footprint’s ability to resist cornering forces increases by only about 0.8 or so of that mass.

What is only rarely realised is that all pneumatic tyres (steered or unsteered) act in this manner. A side force, such as a wind gust or forces whilst cornering, causes unsteered tyres too to form slip angles.

Adding weight to the rear (only) increases the rear tyres’ slip angles when subject to the forces mentioned above. Increasing tyre pressures reduces slip angles. 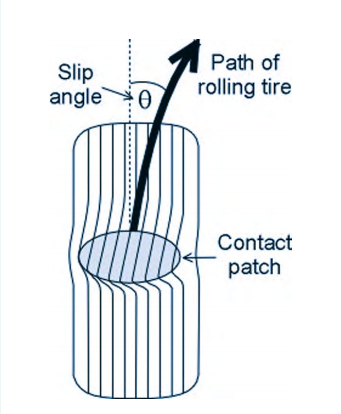 The slip angle is the difference between the direction the wheel rims are steering and the direction that the tyre’s footprint on the road is heading. Pic: mgf.ultimatemg.com/

Suspension engineers design such that, within specified limits and manner of weight distribution (and tyre pressures), the slip angles of front tyres always remain slightly greater than at the rear. This, so-called understeer, ensures that, if cornered at excess speed, the vehicle automatically takes up a slightly wider radius. This automatically reduces cornering forces, and hence slip angles. The final tuning to ensure this is by varying front and rear tyre pressures, spring stiffness (and sometimes roll bar stiffness).

Stability issues inevitably arise if any change is made that affects the ratio of front/rear slip angles. This is often done by caravan owners fitting stiffer rear springs (or adding air bags) to cope with the nose mass of a heavy caravan. Increasing spring stiffness only at the rear increases resistance to roll, in turn increasing the load on the outer rear tyre. This increases its slip angle. It decreases the load on the front tyre, decreasing its slip angle. This reduces understeer (and may even introduce oversteer). The result is to cause the vehicle to adopt a tighter turning radius – in turn increasing the forces … and so on.

If this happens during an emergency swerve at speed on a hard surface, the rear slip angles may so exceed the front slip angles that the vehicle enters a non-recoverable (so-called feedback loop) and spins out of control. This is the major cause of caravan rollovers. It can also affect poorly laden trucks and coaches (often in a cyclic manner.

The equally undesired opposite – excess understeer is introduced if a heavy cab-over has been added to a chassis not intended to accept its weight. The problem is not just the often minor added weight of the infrastructure, but the mass that owners locate in it. Few such chassis are intended to carry the load of a passenger. The overladen front springs (only) are often ownerreplaced by stiffer ones. The result can only be to further increase what is already excessive understeer. If you must mess around with beefi ng up suspension make similar changes front and rear.

Unless experienced in this area, a driver is unlikely to detect any change in vehicle stability following any such change. If they do, it is likely to mislead.

Decreasing understeer causes the vehicle to feel more agile. It turns more readily into corners – but may sway more when subject to as side wind gust. In excess, however, the vehicle can spin out of control.

Increasing understeer increases the tendency for the vehicle to maintain a straight line. This induces a false sense of security as that now excess straight line stability may hinder or even preclude a sudden change of direction to avoid a head-on. (Oil tankers behave like that too.)

Do not test this yourself. Unless the changes made are truly major, the effects will only occur at speed on dry firm surfaces and at lateral accelerations way beyond that experienced in normal driving.

It matters because understeer/oversteer balance is often the ultimate difference between control and total loss of control in emergency conditions. In such situations turning the steering wheel sharply may cause the front slip angles to become infinite – with resultant zero steering control. If the rear tyres alone lose all grip the rig will spin. This effect is increased if braking at the same time.

Stability testing and fi nal adjustments are totally routine during vehicle development. It is confi ned to motor industry proving grounds where there is ample and safe space to do so. It is done even with large fully-laden trucks.

On dirt and slippery roads, a tyre’s footprint has marginal frictional contact. Only minor slip angles are developed before all grip is lost. The vehicle may only exhibit under/oversteer if considerably out of balance front/rear.

Or, as with off-road Dakar-like rally vehicles, that use specialised (often 700 by 16) tyres that generate considerably elongated footprints at low tyre pressures.

ACKNOWLEDGEMENT I acknowledge Professor Hans Pacejka’s Tyre and Vehicle Dynamics in the preparation of this article. Its 634 A4 pages cannot possibly be précised (by me at least) to a page and a half, but it explains in detail why it’s not a good idea to mess with anything that directly or indirectly affects a tyre’s on-road behaviour – and that both front and rear tyres steer a vehicle. Whether intended or not.

Collyn’s books are essentially practical. They cover virtually every aspect of caravan and motorhome selection, usage and even self-building. Most are available directly from CMCA NHQ. They can also be obtained directly from caravanandmotorhomebooks.com