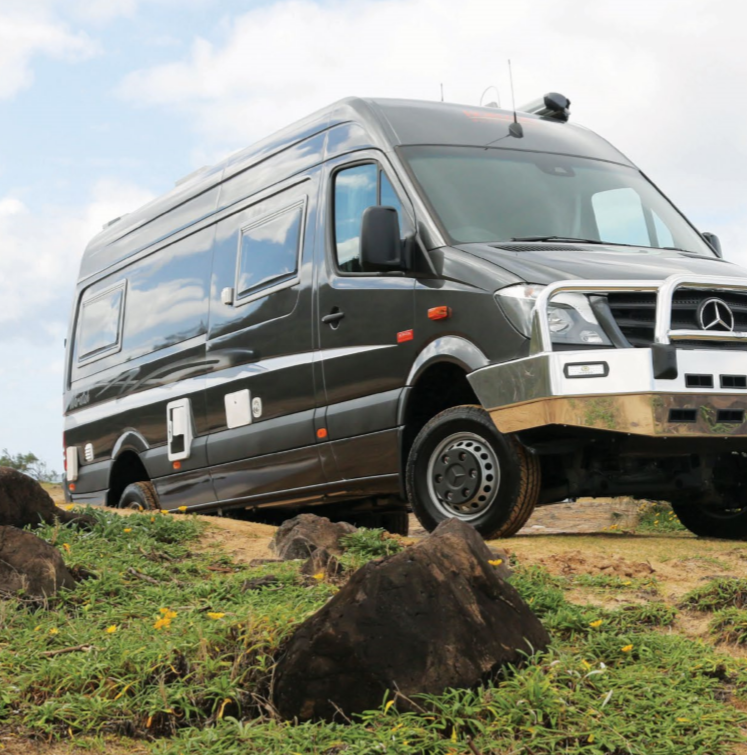 In the motorhome world there are all kinds of compromise. Generally speaking, compromise involves money and the usual formula is that the more money there is, the less compromise is required. Compromise isn’t necessarily a bad thing though, and a good example becomes apparent when a 4X4 motorhome is desired.

Currently in Australia there are few 4X4 chassis on offer and some of those are only available in very expensive, custom-built motorhomes. However, there are some less expensive alternatives available, including Horizon’s Waratah motorhome, which is available in both two-wheel-drive and all-wheel-drive. The Waratah is based on a Mercedes-Benz Sprinter 519 CDI, which comes with the 4X4 option – something that Horizon has used to full advantage in its motorhome build.

For a bit of background on Mercedes Benx nomenclature, the 519 refers to a 5000kg van (downgraded to a 4995kg for licence reasons) with a 190 horsepower (140KW) turbo-diesel engine.  The V6 3.0L turbodiesel pushes the Waratah along in good form. There’s no doubt that having the largest, most powerful engine in the Sprinter range is an asset for off road use. Although the two-wheel-drive Sprinter comes with a seven-speed auto gearbox, the 4X4 is only supplied with a ?vespeed box. Even so, I’d say it’s still one of the smoothest autos in the light truck world.

Naturally, the Sprinter comes with the full alphabet of safety systems – ABS (Anti-Lock Braking System), ASR (Anti-Slip Regulation), EBD (Electronic Brake Force Distribution), BAS (Hydraulic Brake Assist) and Adaptive ESP (Electronic Stabilisation Program). In the 4X4 version, the ESP also comes with the 4ETS, a traction control system designed to provide extra torque to the wheels with good grip, rather than those that are spinning.

Everything that opens and shuts: the large Mercedes-Benz Sprinter van makes a good basis for a well-equipped motorhome

The Waratah motorhome is built very much in Horizon’s style and our review motorhome came with an optional Graphite Grey metallic ?nish. In the van body there are cut-outs for the external shower, Dometic cassette toilet and Truma water heater on the driver’s side, as well as a gas cylinder bin and fridge vents on the kerb side. A point to note is the gas cylinder bin is easily accessible from the outside of the van, rather than being locked behind the rear doors as is sometimes the case. The Waratah has been ?tted with an alloy bull bar, which can also be ?tted with driving lights.

Dometic windows are ?tted allround, including on the wall panel behind the sliding door, which features a sliding window rather than the more common hopperstyle. This is to avoid the potential for accidentally ripping off the open window when opening the sliding door. The sliding door was ?tted with the optional electric opening system, operated by a simple push button. Both the side and rear doors were ? tted with optional, easy to use velcroed ?yscreens with zippered ‘doors’, which I reckon are essential for any travels in mosquito country. 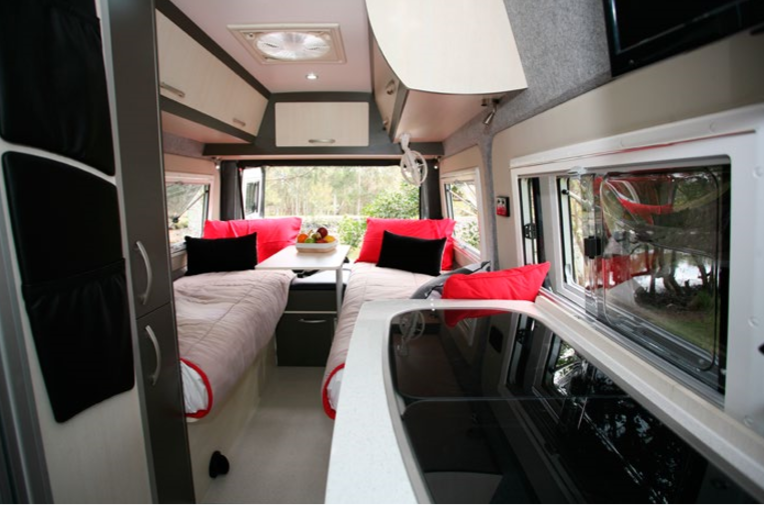 Our review motorhome came with two rear single beds; however, the Waratah is also available with a club lounge layout in the rear. Up front, the layout is the same for both arrangements with a mid-station kitchen bench on the nearside and a bathroom cubicle opposite. This leaves the front area clear for a small lounge/dining area, which includes the swivelling driver’s cab seats and a forward facing seat behind the driver’s seat with a table in between. The Waratah was ?tted with a couple of options, which included a double dinette seat as well as black leather upholstery across all the seating.

Personally, I’m not sure about the black – might get a bit sticky on a hot day!

With the swivelling cab seats turned, the lounge/dining area makes full use of the van’s front area and the table has a simple extension ?tted underneath, which extends across to the passenger seat. Under the table are wall-mounted 240V and 12/5V USB points, and two small doors provide access to the storage area under the dinette seat. Although a tad awkward, it’s much easier than lifting seat cushions and plywood panels. 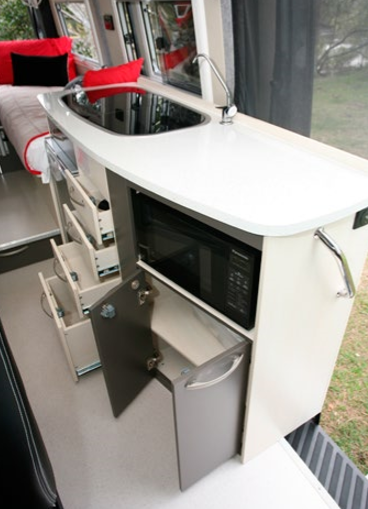 There is a bit of compromise required again in the kitchen, which is ?tted with an under bench 110L Waeco fridge to allow space for a three-burner combo cook top and stainless steel sink, both with smoked glass lids, and some precious bench top working space. Also ?tted under the bench is a microwave, along with a double cupboard and four storage drawers. There wasn’t a grill or conventional oven ?tted to our review van but they are available options.

In keeping with other Horizon layouts, the air space above the kitchen bench is not used for overhead lockers, which I reckon makes the area feel less cramped. Instead, the wall is ?tted with a 12V switch and gauge panel. There’s also a swivel-mounted ?atscreen TV here, which is nicely located to be viewed from either the front seats or the beds in the rear. Additional electrics (240V sockets and 12V/5V outlets) are found on the opposite wall above the bed.

The bathroom makes good use of the available space and comes with the ubiquitous cassette toilet, ?exible hose shower and a small corner wash basin. There’s also a fan hatch for ventilation and a shaving cabinet. It’s not oversized, but there is space to turn around and it is practical in a van of this size. Between the bathroom cubicle and the bed is a full-height cupboard with upper and lower wardrobe space. It’s narrow, so there is no temptation to overload!

At the rear, the single beds measure 1.95x0.66m (6ft 5in x 2ft 2in). An advantage of using north-south facing single beds, rather than an east-west double bed arrangement, is that the beds are much easier to get in and out of and are also easier to make up. It also means a Lagun swivel-mounted table can be ?tted between the beds. Also between the beds are two cushion-covered, shallow storage compartments at bed level.

The entire sleeping area is on a raised platform, which allows a discrete ?oor-level drawer to be ?tted as well as a storage compartment that’s readily accessible from both inside and outside via the rear doors. Part of this area is taken up by the gas cylinder bin and also, in this case, the optional diesel space heater.

Given this is a 4X4 motorhome, it’s reasonable to expect that it be fully ?tted-out for remote travel and, while it is, some of the features, including the 200W solar panels, 400W inverter and 12V fan are options, rather than ?tted as standard. This is something to keep in mind, depending on your travel requirements. Also an option but not ?tted to this particular model is an air-conditioner; however, there were plenty of 12V fans ?tted – both hatched and mounted. 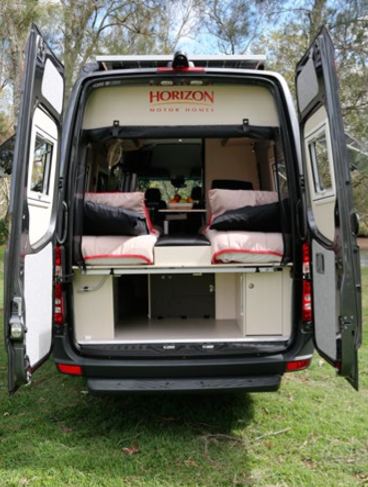 The Waratah is certainly built in the way I have come to expect from Horizon, which is a specialist in large van conversions. And while Horizon doesn’t produce a new model every year, it has a policy of continual improvement.

While the Waratah 4X4 makes no pretensions about having the capabilities of something like a Land Rover, it offers the bene?t of four wheel traction for conditions as variable as soft, muddy tracks and snow-covered mountains roads. With all the options ?tted to this model, it’s certainly capable of extended remote travel and in a style, of course, that provides a high level of comfort. 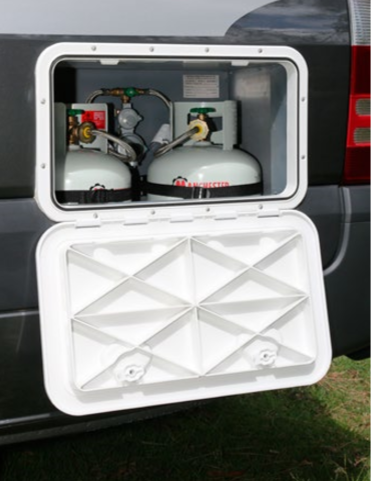