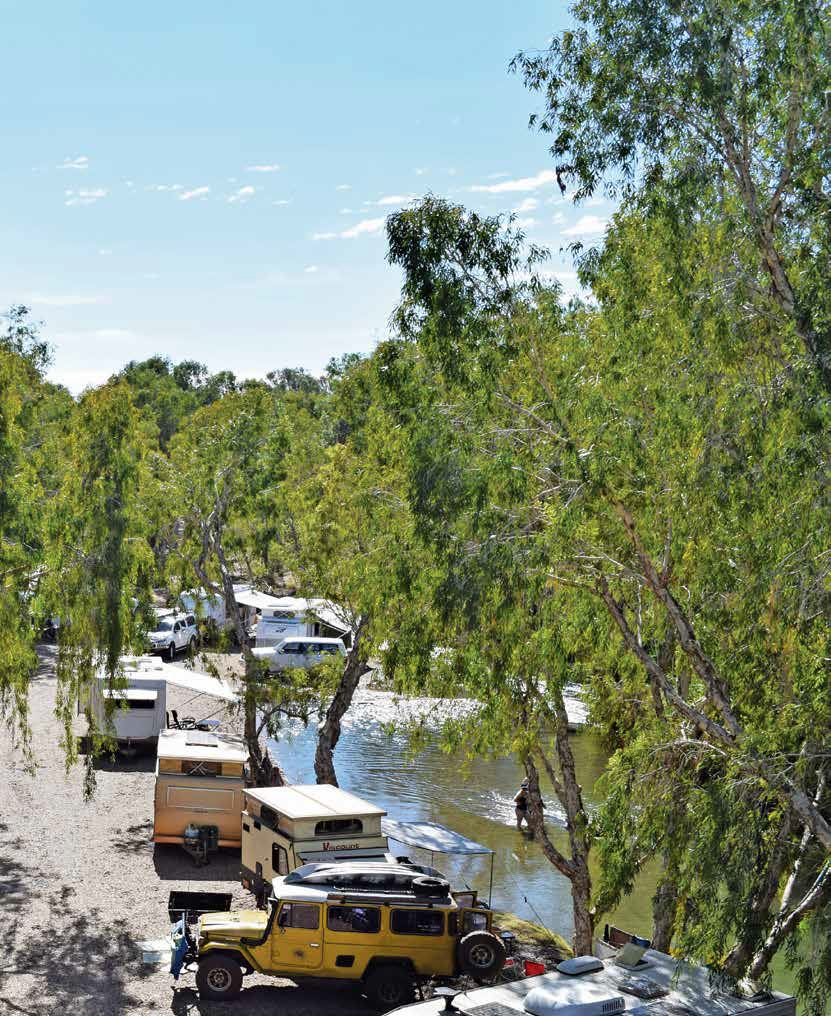 It’s a fact — there are simply more of us around doing the same things. Go back 150 years, and the planet’s population was on the cusp of unprecedented expansion. From a stable 800 million people for around 300 years, the Industrial Age spawned a period of exponential growth that sees 7.53 billion people now living on Earth. Here in Australia, 500,000 people inhabited the continent before white settlement. Just over 200 years later, there are 25 million of us!

While we’re fortunate to live in a country that still offers vast expanses of unpopulated, or sparsely populated country, we’re certainly not alone, and unpleasant reminders of this fact can be found everywhere. For example, there’s nothing more uplifting than camping under stars after a day’s drive through a remote part of Australia. But it’s equally depressing to come across an idyllic spot that’s been marred by irresponsible driving or lack of camp hygiene. And it’s not just the ratbags who are to blame. 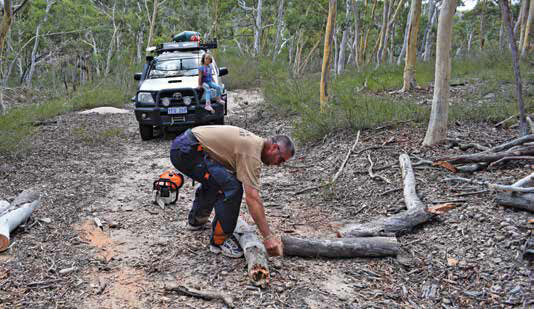 Clear the track and stack wood off to the side

Have you ever seen car tracks across a paddock where drivers have taken a short cut from the designated track? The reason for the surveyed track’s location may be to discourage transit across an endangered species (plant or animal) zone. Alternatively, it may be to avoid a boggy area in the wet season. Either way, cutting a new track is lazy and rude.

It’s the same when we drive around an obstacle instead of clearing it. Don’t create new routes or expand existing trails unless you have absolutely no alternative. For example, a fallen tree across a track needs to be removed — not skirted around. If you’ve had the foresight to pack a chainsaw, you can cut firewood for yourself — or the next traveller — ensuring that you leave some as refuge for local fauna. Just drag them clear of the road. As for wet areas, if you create a rut, try to put some of the mud back, rather than leaving the rut to fill with water and become a bog. Instead of making a bad situation worse, give the next vehicle an outside chance of negotiating the track without too much difficulty. 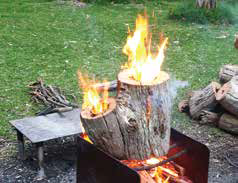 This is not acceptable, as it ruins the BBQ and burns a potential home for native wildlife

Remember too that just because there’s land by a public roadside that’s unfenced, doesn’t mean it’s a ‘free camping’ location. Unless it’s clearly marked otherwise, the land is probably privately owned. So if you camp without permission, you’re trespassing. Simple. Similarly camping on council land requires council approval. So look for designated camp areas — don’t just pull up anywhere that takes your fancy. This may require a bit of planning so you’re not driving around in search of a suitable campsite as the sun sinks below the horizon. But remember that every time we’re found doing the wrong thing, we tar the reputation of our recreational sector as a whole. Not only that, we also expose ourselves to the risk of fines. In NSW, for example, fines for illegal camping range from $110 on-the-spot to $2200. 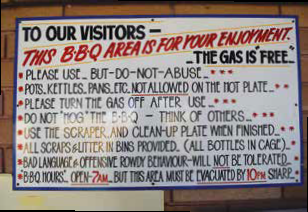 CLEANING UP OUR ACT

Did you know that in national parks we’re supposed to camp 100 metres from all watercourses and drainage channels? This is for lots of reasons. Firstly, if we camp on a river bank, we trample the vegetation. Consider, for example, the impact of a heavy caravan and tow-tug on the subsurface roots of the trees around us. Destruction of vegetation destabilises river banks which leads to erosion. This erosion ends up as suspended particulates in the water which cause de-oxygenation, damaging or killing aquatic life.

Another problem with waterside camping (and any bush camping for that matter) is the potential impact of our daily cleaning habits. Grey water from our sinks, showers and washing machines can harm the environment if it ends up in the wrong place because many soaps and detergents are made with phosphates, formaldehyde, chlorine, phenols, bleaches etc. These pollute the environment, particularly waterways, and damage things that live in our natural environment.

Indeed, grey water can also hurt our fellow campers. It’s full of microorganisms that wash off our bodies. While normal and safe while they’re on our own bodies, when they’re concentrated, in both solution and area, they can cause gastro-enteritis and skin or respiratory infections in others. Just think about the next camper pitching their swag where you’ve been draining your grey water and you’ll start to picture how unpleasant it could get. 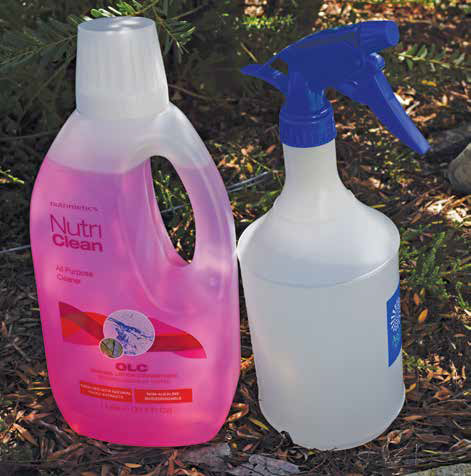 A food-grade multipurpose cleaner is essential around camp

Don’t burn hollow logs. While they may be dry, and the hollows may help your fire to roar, you’re likely to be burning someone’s house. It’s worth remembering that only old trees have hollows. They take over a hundred years to grow, mature and decay to a point where they can host birds and animals. Possums, cockatoos and a myriad of other species use them as nests when they’re standing tall. Then, when they fall, mammals such as quolls, numbats, bandicoots, antechinus and lizards use them to help escape from birds of prey, foxes and cats. Even fish utilise submerged hollows for shelter. As a general guide, to support a rich mix of species it takes 3–10 hollow bearing trees, with as many as 30 hollows, per hectare.

Consider too the size of your campfire. If too large, the fire uses heaps of wood, roasts your toes but is useless for just about anything else. With a roaring fire, most of the energy is dispersed into the atmosphere above and around you. So consider whether a couple of smaller fires — one in front and one behind — is a better approach. Use a reflector and you’ll help radiate the heat back towards you as well. A fire like this is also going to be far more effective if you want to cook, whether it’s jacket potatoes in foil, a damper in a camp oven, or marshmallows on a stick. 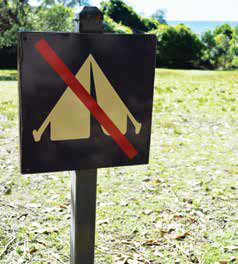 There are always good reasons behind camping restrictions

Talking of firewood – bring your own. Harvesting firewood has an environmental impact, like almost everything we do. But there are ways to minimise the damage. While we’ve already talked about leaving hollow-logs alone, we all know what happens around well-used camp sites. Every stick of firewood, of any shape or size, is picked clean. So none of it is left for birds to use as nesting material (think of the material needed to make a Wedgetail Eagle’s eyrie). And it’s not available either to the invertebrates that live in, and devour, rotten wood which in turn feeds the soil and sustains the next generation of trees.

It’s far better to burn firewood that you’ve carried in; and preferably that which has been sustainably harvested. You’ll find firewood at farm gates and sold by certified firewood merchants. There’s also the option to use heat-treated pine pallets that local hardware stores might be happy to let you take away, and which would otherwise be dumped into a skip. 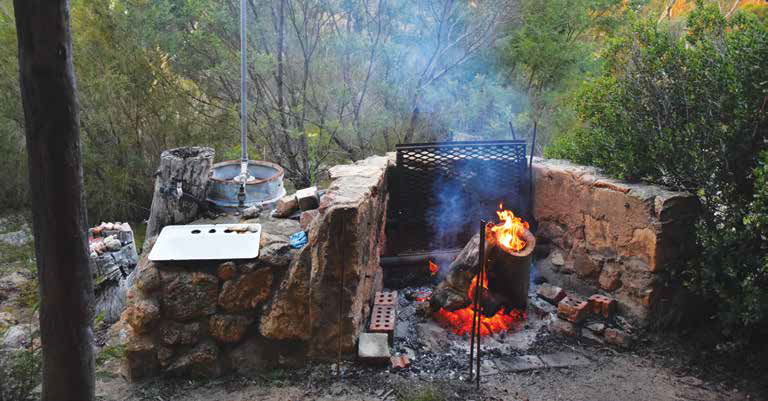 Most of us are probably aware of the ‘Tread Lightly’ initiative. Perhaps you’ve seen slogans like ‘Tread lightly: leave only footprints’? Maybe you’ve thought that this kind of thinking is the domain of Greenies or bushwalkers setting off across sensitive landscapes.

Well, it’s not. ‘Tread lightly’ was an initiative of the US Forest Service that was launched in the mid- 80s. The program is about leaving a good impression, both on recreational land and with the nearby communities. It’s focussed on ways to minimise the impact of recreational activities, while still enjoying the outdoors, whether as motorists, bikers, boaters or walkers. Indeed, its common sense foundations are rooted in principles that have guided cultures for millennia. Whether it’s the Bible, Talmud, Torah, Quran, sayings of Confucius or the Golden Rules of Egypt dating to the mid-7th century BCE, the entreaty is pretty well the same: ‘do the right thing because it’s the right thing to do’. And this is what ‘Treading Lightly’ is all about. 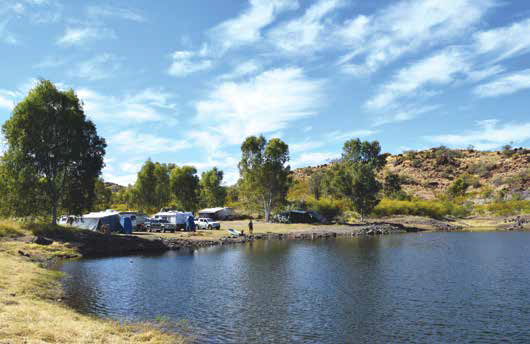 It’s important to camp away from the water’s edge

Travel responsibly — on designated roads, trails or other areas.

Respect the rights of others — including private property owners, recreational trail users, campers and others so they can enjoy their recreational activities undisturbed.

Educate yourself — prior to a trip obtain travel maps and regulations from public agencies, plan your trip, take recreation skills classes, and know how to operate your equipment safely.

Avoid sensitive areas — such as fields, lakeshores, wetlands and rivers. Stay within designated routes and campgrounds.

Do your part — by modelling appropriate behaviour, leaving the area better than you found it, properly disposing of waste, minimising the use of fire, avoiding the spread of invasive species and restoring degraded areas. 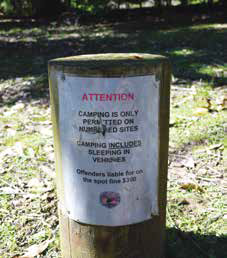 Firstly, consider the size of your caravan and the capacity of your tow-tug. Ideally you want to be at least 500kg under your ATM and GCM when fully packed. The lighter the load the less fuel you’ll guzzle. Remember too that a well-maintained tow-tug will run more efficiently.

Pack lightly. It’s not necessary to crowd your rig with everything you might need to support your trip away – particularly when it comes to consumables. By purchasing produce from regional farmers’ markets and from farm gates along your route, you’ll be supporting the locals whose turf you’re on. You’ll also reduce the ‘food miles’ of the produce you buy, and you’ll reduce the weight of your rig too.

Then choose a camping location closer to home, stop and stay a while. Not every trip needs to be one for the record books. And sometimes the best things in life may be closer than you imagined. 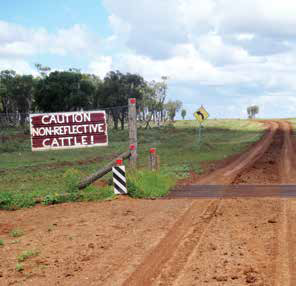 We live in an age of convenience. We want everything to be faster, quicker, now! But there’s often a dark side associated with convenience.

Consider the modern taste for coffee machines that use pods. Most coffee pods are made of plastic and aluminium, generally in a layered composite. This means that some recycling plants won’t touch them. They are also small. So, even if they are accepted at a recycling plant, the systems frequently miss them. The result? They end-up in landfill. Once there, they’ll take over 500 years to biodegrade. With 3 million pods going into landfill daily in Australia, that’s a massive caffeine headache for the environment.

What’s wrong with slowing down, making a pot of coffee and listening to the world wake up?