Features Reviews Technology Cooking Destinations Stories Fishing
It's Not Just Mine
Words and Images by: RICK LAIRD PHOTOS BY THE LAIRD FAMILY 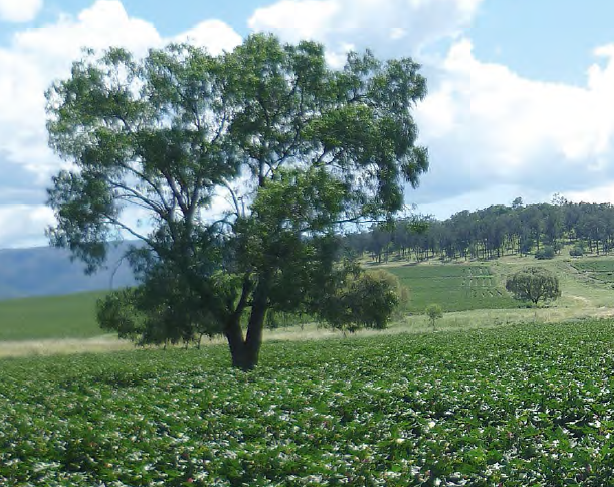 The Liverpool Plains and its network of rural townships are steeped in a rich farming history. Situated on the slopes of north-west NSW and bordered to the north by the Great Dividing Range, the Liverpool Range (to the south) and the Warrumbungles (to the west), the Liverpool Plains has been one of the state’s prime agricultural regions since its settlement in the 1820s. The proud farming traditions of this quintessential Australian landscape are very much at work today – from the fields of sunflowers, lucerne, maize, cotton and wheat to the vast grazing regions populated by the cattle and sheep we feed upon.

For a bird’s-eye view of the varied hues of Australian croplands it is hard to go past the township of Quirindi. From here you can take in a 360-degree view of the Liverpool Plains and the Great Dividing Range. This is the inspiring and dramatic view of one Australia’s great foodbowls, a productive landscape that has been feeding generations of Australians to this day. This is a place where farming and nature conservation co-exist.

Ours is one of the oldest farming families of this area, the Laird family. The 8000 hectare Leard State Forest is named  after our squatter ancestor who began farming and grazing this land in the 1850s. Maules Creek is where our homestead sits, between Leard State Forest and Mount Kaputar National Park.

The family name and the forest name are spelled differently which can be a little confusing. In fact, both spellings are derivations of first Laird to settle in Maules Creek: William Joseph Layard, who arrived in Sydney on the ship The Thomas Harrison on June 9 1836, at the age of two.

He became a stockman at a property called Coolah at Maules Creek. There he married and had 10 children, starting this large family’s history in the area.

Between 1867 and 1884, the Laird family acquired land in and around Maules Creek, including the property Roslyn which is now owned by Andrew and Rick Laird, the two greatgreat grandsons of William Joseph Leard. William ‘Bruce’ Laird (80) and his wife still live in the original Roslyn homestead.

There are three families of Lairds in Maules Creek, all descendants of William Joseph, and all still farming and grazing cattle. The area has soft fertile soil suitable for most crops that we grow, such as wheat, barley, sorghum, oats, Lucerne, canola and even cotton. 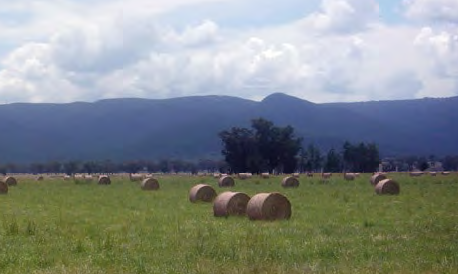 For a wonderful view of Mount Kaputar head to its foothills, for among the crops and cattle of the Liverpool Plains are forest gems that provide a haven for our extraordinary wildlife. You will be awestruck by the towering forests and the stunning rock formations and scenery at Mount Kaputar. It is a paradise to explore. 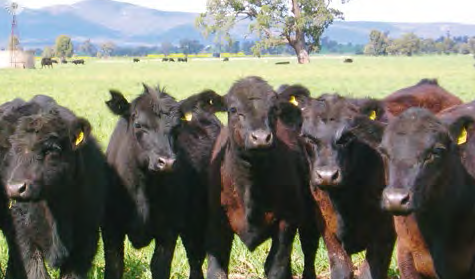 Cattle group on the Roslyn property

You can enjoy birdwatching and bushwalking on the park’s many tracks, or horse riding and bike riding through this spectacular yet fragile landscape. You will find a lookout to relax at and to soak up the views of the park or have a picnic or barbecue. Stay overnight and hear the sounds of the bush and search for sugar gliders. Cross the Harparary Bridge, take the Maules Creek Road and ‘head for the hills’ and you will find Maules Creek itself. Melaleucas line the creek and crystal-clear waters flow down from the mountains. There are many lovely spots along the river for a picnic and to take in the extraordinary view up to the Nandewar Ranges. It’s a spectacular viewpoint.

Leard State Forest is home to nearly 400 native Australian plants and animals. A walk in the forest, eyes up, is likely to reward you with one of those true Aussie moments of spying a curled koala perched high in a tree. The Liverpool Plains is renowned for its birdwatching and this forest is home to many rare and threatened bird species, including the brightly-coloured  swift and turquoise parrots, the regent honeyeater and the diamond firetail. Stick around at night and you may also glimpse a feathertail glider – at just 10-15g, it is thought to be the smallest glider in the world. Fittingly, its scientific name means pygmy acrobat.

The Leard State Forest is the largest remnant of native forest and woodland on the Liverpool Plains. The NSW government has categorised it as a Tier 1 region meaning it ‘cannot sustain any further losses’.

The laws the farming community must abide by to protect these natural areas do not apply to the miners. One of the best examples of this is happening right now in the magnificent the north-west slopes of NSW.

The Lairds, a sixth generation Maules Creek farming family, are fighting the mines that threaten not only our farming interests but also the ecologically important state forest. Unfortunately, the mining has already started in Leard State Forest. In recent years we have seen hundreds of hectares of this important forest cleared for open-cut mining.

The Leard State Forest has 1500 hectares of box gum woodland, listed as critically endangered under federal laws, yet 1100 hectares of this ecological treasure will be cleared for  mining. The mines are where the biggest threat to our home begins. Over the last few years there has been a massive shift in rural Australia with large scale and seemingly unfettered mining proposals being pushed by both private (often overseas) interests and governments desperate for royalties.

The Maules Creek Valley has pristine creeks feeding into Maules Creek itself. Most of the road crossings are concrete and only at the bottom of the creek beds. During times of flood in the valley, these creeks cut roads everywhere, and things grind to a halt.

That’s something to think about when travelling up this way. It’s certainly a recipe for more destruction if large-scale clearing takes place to widen roads and make difficult terrain accessible for heavy mining equipment, machinery and vehicles.

The proposed or expanded mines will result in a mega mine-complex. These three developments include:

For the local community we would become just another mining region. For my family this means six generations of farming and grazing is at risk. Modern agriculture began here in 1820 and this is the biggest threat we have ever faced. These mines would operate 24 hours a day, seven days a week. 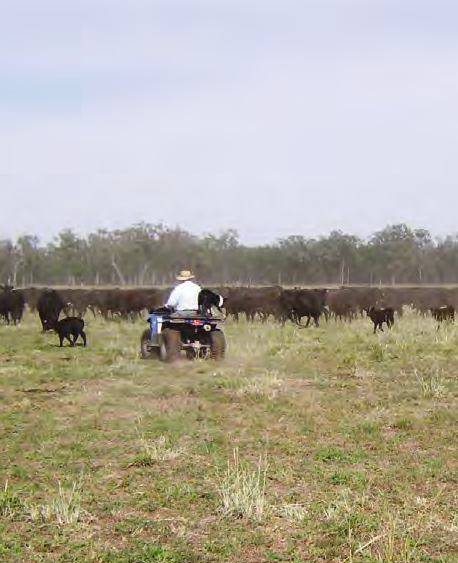 Huge amounts of dust, estimated to be around 18,000 tons per annum, will settle in the Maules Creek valley and the health impacts will be huge. Air quality will go from good clean air to a constant haze of dust and toxic gas from blasting.

The water table is set to drop from seven metres typically, to up to 75 metres in some areas. This is a real problem with domestic supplies and stock water bores failing.

Land values will plummet as problems such as noise, dust and water issues are made public via the media. Old farmers who want to retire will end up with no buyers, especially if they are no more than 6km from the mine. They call the inner perimeter the ‘zone of affectation’, and the farmers in that zone are encouraged to be bought out by the coal companies, while the rest of the valley residents have to sit up and take our medicine. Let’s face it, who would want to live within six or seven kilometres from huge open cut coal mines.

If the projects receive their full approval, Maules Creek will become a depopulated area. There is a real danger of the school closing, as it will be within a few kilometres of the mine project’s boundary. The children will be directly affected by 2.5 micron coal dust, known as the killer dust – PM 2.5 is a massive concern. The school, Fairfax, has 13 students and has been a long tradition in the valley. When I went to Fairfax in 1974, there were 56 children attending. My grandfather William Leslie was one of the first Fairfax students in 1910, and would turn in his grave to see what is happening in Maules Creek today.

It really does astound us, that all levels of government continue to destroy our way of life, the agricultural industry, the environment and biodiversity, history and heritage and air and water quality. This project and the burning of 23 million tons  of coal annually will create more greenhouse gas than New Zealand’s annual output. The life of these projects is only 30 years, yet could ultimately destroy forever the environment and also the fabric of the Maules Creek community which dates back to the 1850s.

Today, my family stands side-by-side with many other locals, with the Traditional Owners, the Gomeroi and with a strong conservation community from the region. Organisations like Mystery Dingo Tours, and national and international environmental groups, are fighting to protect the land, to stop the proposed Maules Creek Coal mine from destroying much of Leard State Forest and its plants and animals, damaging water resources and risking the community’s health. All this while governments bend over backwards to give miners anything and everything they want in a desperate attempt to keep the royalties coming.

Last rays of the day about to disappear

We’re up against big mining interests but a growing number of people and organisations across the country are supporting our work.

Over the summer there will be lots of events held at the camp set up at Maules Creek to stop the mine. If you are in this neck of the woods enjoying the wonderful history and scenery of the Liverpool Plains they would love you to come and hear the story of their fight to save Maules Creek and also to see Leard State Forest for yourself.

FOR TOURS AROUND THE REGION