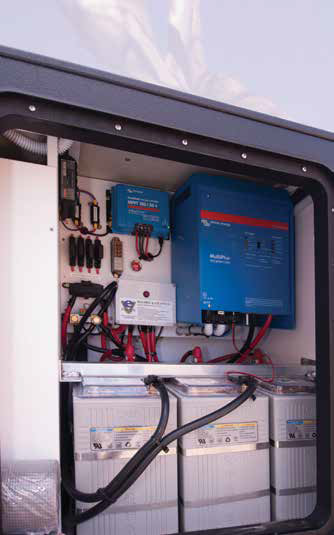 Older readers might well remember one of the maintenance chores on any vehicle, be it around-town sedan or A class motorhome, was checking the electrolyte levels of a battery on a regular basis. As part of that, there was a need to keep a container of distilled water close to hand. Those days are well and truly gone for most people and up until a few years ago, there was a need in some cases for adequate ventilation around batteries to prevent the build up of gases but even that has passed by for some battery types as well.

Up until a few years ago deep cycle/AGM/Gel cell batteries were the mainstay of house batteries in all recreational vehicles. Battery development hadn’t been spectacular as such but rather an evolving thing, particularly as developments for the military, especially in the USA, made their inevitable way into the RV world.

In more recent times, lithium iron phosphate (LiFePO4) batteries have grabbed the attention of the RV world for a couple of very good reasons. Their power-to-weight ratio is much better than equivalent lead acid/deep cycle/AGM/Gel Cell batteries and they have a higher discharge rate than those same batteries.

A few years ago, there was a hiatus in the usage growth of lithium batteries because of an incident in which lithium cobalt oxide (LiCoO2) batteries caught fire in two Boeing 787s. At the time it was commonly thought that all lithium batteries were affected but those used in RVs are lithium iron phosphate (LiFePO4) which are larger and heavier and don’t have the same problem fortunately. The 787 incident is one of the reasons why airlines seem to keep changing the rules on whether spare camera/video batteries should be aircraft hold or hand luggage!

Back in the RV world, undoubtedly one of the major advantages of lithium LiFePO4 batteries is that they can deliver a very large current down to about 20 per cent of their capacity without any damage and with three per cent or less voltage drop. That might not sound impressive until compared to a deep cycle/AGM battery. The most effective way of getting a good battery life is to never let it discharge below 50 per cent capacity. Doing that a typical lifespan of about 500-600 charge/ discharge cycles can be expected. Whereas a lithium LiFePO4 battery will deliver up to 2000 cycles.

Are lithium LiFePO4 batteries for everyone? A good question to ask since they are considerably more expensive than say a well set up AGM battery system which has a relatively light “house load” (like just a fridge and lighting system) and appropriate solar panel capacity. The answer to that is obviously ‘No’. Stay with your AGM system. 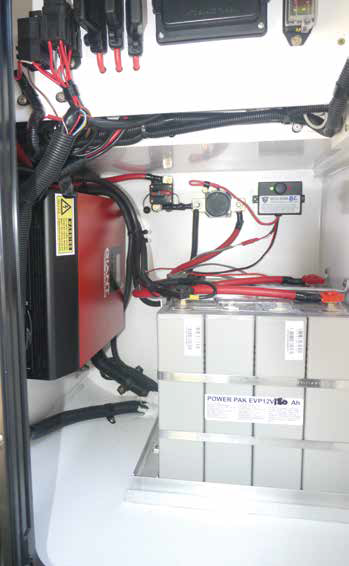 LiFePO4 batteries have grabbed the attention of the RV world

However, where a high-powered inverter is needed for example or extended remote stays are planned then maybe an economic case study would be useful. One of the advantages of LiFePO4 batteries is that they will only have a three per cent voltage drop for much of the discharge cycle. Whereas, all deep cycle/AGM batteries whilst discharging suffer from a constant voltage drop, a typical range being 12.75-11.4V. Over a period of extended hours, that matters to items like fridges which do not cope well with excessive voltage drop.

Given that a lithium battery has different characteristics one of the questions that arises is whether a different battery charger is required and the answer is ‘Yes’.

In the case of lead acid deep cycle, Gel Cell or AGM batteries, they all require a cycle which in a base form consists of three stages: bulk, absorption and float. Bulk is the first stage in the rated current of the charge delivered to the battery at a constant voltage. The absorption stage delivers current at slowly reducing voltage, whilst the float or ‘trickle’ charge keeps a fully charged battery from discharging. Something that happens whether a battery is being used or not.

Lithium LiFePO4 batteries operate a little differently, in that there is a constant current stage and then a constant voltage stage. Undoubtedly the most attractive feature is that it charges considerably faster than any of the lead acid variants.

Which is one reason why battery management systems have been increasingly available. Batteries can be charged from multiple sources – mains charger, Anderson plug, solar panels, generator and even DC to DC converters – and have ever-increasing loads. A battery management system can not only be programmed for different battery types but also cope with multiple charging sources to maximise battery life.

As noted above, lithium LiFePO4 batteries are still relatively expensive and deep cycle/AGM Gel Cell batteries still have a place but it’s a sure-fire bet that costs will come down and we can expect to see more of them used in RV systems.