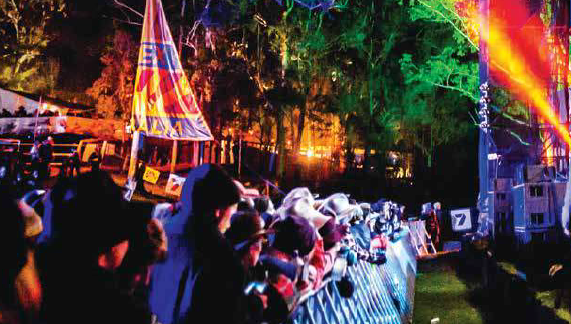 The Gympie Music Muster is one of Australia’s most-loved camping and music experiences. Staged deep within the natural surrounds of the Amamoor Creek State Forest, the Muster showcases a mix of country, roots, blues and country rock music as well as workshops, dancing, bush poets, kids’ club and more.

The four-day event will run from the 25th to 28th August this year and will be celebrating its belated 40th anniversary. The first Gympie Muster, held in 1982 to celebrate the Golden Guitar win by the Webb Brothers, has grown to become one of Australia’s most recognised and iconic fundraising events. The Muster is proudly owned by the Apex Club of Gympie and its fundamental purpose has always remained the same — to raise funds for those in need within the community. Over the years, there have been more than 2500 performances, including country music royalty Slim Dusty who has a camping area named in his honour. 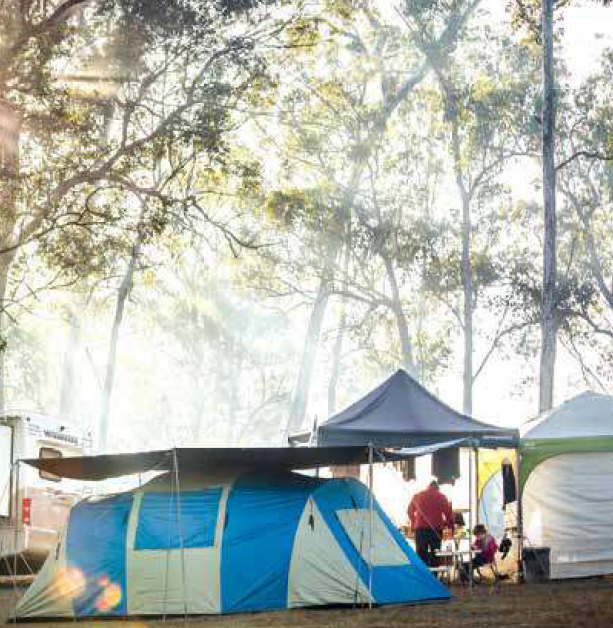 There are several camping options available

As well as more live music than you can poke a cattle prod at, The Muster will hold a wide range of workshops and events each day so you can immerse yourself in the experience and get involved. Sign up for ukulele workshops, Line Dancing with Chris Watson, Bush Poets Breakfast, Bush Balladeers, Rock’n’roll Dancing with Ray and Lynette, Cake and Cordial sessions, and the NAB Muster Talent Search. You can also check out the Gympie Blues Club, High School Bands of Gympie, Muster Youth Showcase and Gympie Mazda Kids Country. If you’re in the mood for some retail therapy, there’s market stalls offering fashion and jewellery, gifts and nick-nacks, and plenty of the latest camping and outdoor accessories. 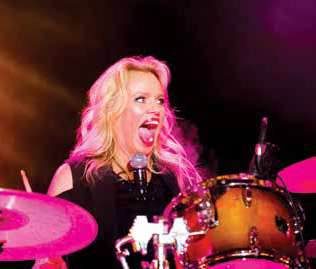 You can purchase a festival four-day pass for $475 ($186 for teens and free for children under 12), which includes entrance to the festival for all four days and general camping from 20th August through to the 29th August. You can also purchase a single day pass (prices vary), which includes entrance to the festival on your day of choice plus general camping.

Camping at The Muster is a unique and integral part of the festival experience and is included in the cost of your festival ticket. You will be in the beautiful Amamoor Creek State Forest, a riverine rainforest in the Gympie region. Bring your RV and rope-off your “claim” from 30th July — you can stay and camp from this date if you choose (just remember there is no access to camp amenities until 20th August). Early rope-off is only available to Festival four-day ticket holders who have also purchased a separate ticket for this camping option, and there is a maximum of six people per rope-off site (up to 10 x 10 metres). All sites are unpowered — you are welcome to bring your own power sources providing you don’t start them before 6am or after 10pm.

Alternatively, and by paying a bit extra, you can check in to Banjo’s tent motel which includes a pre-set-up tent with canvas floor, lighting, mattresses, table, chairs, dedicated amenities and a communal mobile recharge station. You’ll also get breakfast each morning of the festival and a ride to the festival entrance on a free shuttle bus. Linen can be supplied for a fee and there’s a maximum of five people per tent. Many of the festival’s loyal patrons have been attending for years and have built dedicated camping areas and bars where anyone is welcome to drop in for a beer and a chat. One of the best parts of The Muster experience is simply wandering around the vibrant camping community, meeting new people and having impromptu yarns. 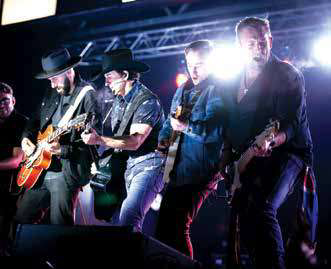 Why not make your trip to The Muster a little longer and discover why the Gympie region is so loved? The Gympie Music Muster is situated in the Amamoor Creek State Forest, located within the picturesque Mary Valley, home to a variety of fresh local produce. To the east is Cooloola Coast, home to Rainbow Beach and Tin Can Bay, and the closest gateway to K’Gari Fraser Island. To the west are the historic farming towns of Kilkivan and Goomeri. In the middle is the region’s commercial hub and heritage town, Gympie City. 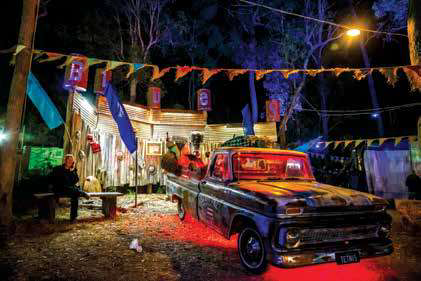 The Mary Valley is all about real country hospitality and is best enjoyed at a leisurely pace. Take your time to explore country villages, horse trails and meandering drives. The fertile lands here grow some of Queensland’s best local produce, which you can taste at local markets or farmgates. Dagun Growers Market is on every Saturday and is a great chance to stock up on fresh, locally grown, spray-free produce direct from the farmer. Held at the historic Dagun Station from 3pm each week, you can also find locally made preserves, cheese, baked goods and more. Kandanga Farm Store and Café, Bunya Grove Produce and Forage Farms are packed with fresh local produce that you can buy direct from the farmer who actually grew it and can tell you the back story if you want to know more. 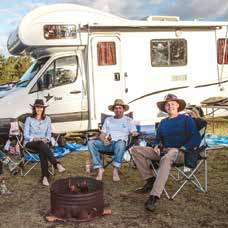 Train enthusiasts will enjoy the thumping pistons, smell of coal and sooty wafts of steam as you chug your way out of the historic Amamoor station in the Mary Valley Rattler. This lovingly restored steam engine is named for its wonderful rattling carriages and scenic journey into the Mary Valley — and looks like something straight out of a Harry Potter film.

For your best chance at seeing the elusive Mary Valley platypus, head for the Amama Park Platypus Walk. These little creatures are very camera shy and hard to spot, but according to the locals, you can find them everywhere. We recommend daybreak or dawn for the best sightings (but no guarantees). There is also another walk which is a 2.5km circuit passing trickling streams and cascading waterfalls before eventually reaching the Diamondfield Lookout. 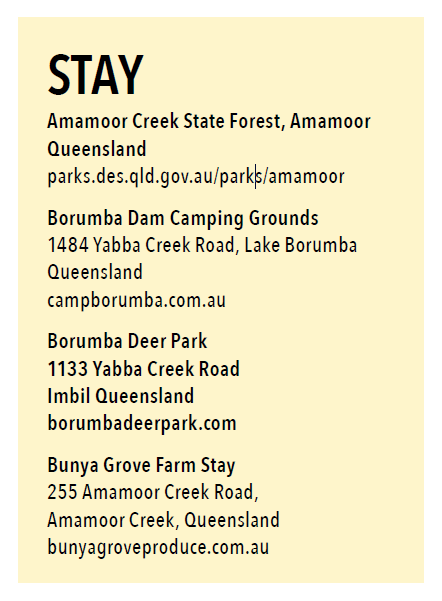 It’s stunningly beautiful here. Sparkling Rainbow Beach and the charming fi shing town of Tin Can Bay are the region’s coastal playgrounds and the southern gateway to K’Gari, Fraser Island, the world’s largest sand island. Because they’re steeped in nature, both are important parts of Australia’s Nature Coast and with miles of white sandy beaches, unspoiled coastlines and safe waters, they’re a magnet for dolphins, whales, dugongs, turtles and all kinds of fish and birdlife.

Framed by K’Gari to the north east and Double Island Point to the south, Rainbow Bay has so much on offer. Get off the bitumen and join the Great Beach Drive (4WDs only), a gazetted beach highway that careers alongside the Pacific Ocean. Located just two kilometres south of Rainbow Beach is the Coloured Sands, a complex array of 72 sandy tones, the result of iron oxide and leached vegetable dyes from the last ice age. This living cross section of time towers more than 200 feet into the sky and is best seen at low tide. 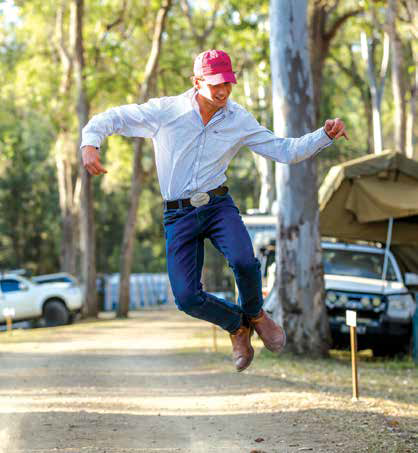 The Muster has become a musical icon

Slightly north is Double Island Point, located within the Great Sandy Marine Park. Only accessible by 4WD, Double Island Point is full of marine life. It’s the perfect place to unwind on an unspoiled beach or, with the longest left-hand surf break in Australia, catch some waves.

If you’ve ever wondered what a moon scape looks like, head straight for Carlo Sand Blow, a sea of sand created by thousands of years of wind. This is a photographer’s dream — overlooking the coastline from Double Island Point to Inskip Point makes the perfect spot for those spectacular sunset shots.

Tin Can Bay’s sheltered coast and safe waters make this serene little coastal town very unique. Perfect for sailing, kayaking and fi shing, it’s one of only two places in Queensland where you can hand feed a dolphin. As the closest southern gateway to K’Gari Fraser Island, it’s also a firm favourite for the shy dugong and with more than 140 species of birdlife choosing to call this place home, it’s also a great spot for a bit of birdwatching. 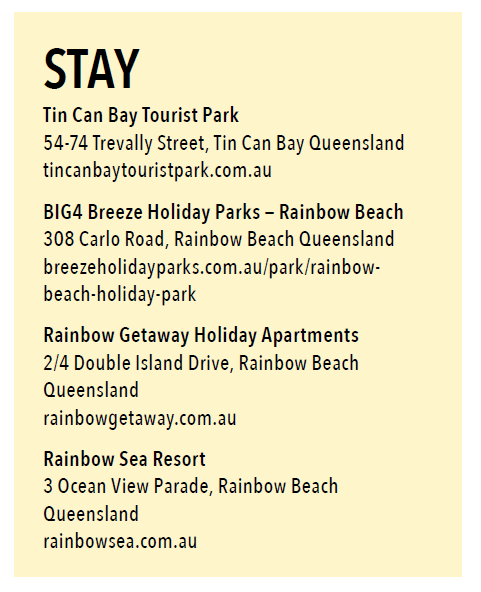 Miles and miles of deep blue sky, expansive wide-open spaces, rolling hills and vast amounts of country just about as far as the eye can see in any direction. This is The West, which includes the quiet villages of Kilkivan and Goomeri, both with their own unique charm and both with a deep love of all things horses and horsemanship.

Visit the Kilkivan & District Museum and Visitor Centre and learn about the town’s golden past from a collection of historic buildings, documents and photos. Check out Mt Clara Chimney Stack, Queensland’s oldest surviving copper smelter built in 1873. Once part of an active copper mine, it’s mostly ruins now but rumour has it that if you look closely enough, little remnants of its gold mining past can be found in the grounds surrounding the chimney.

Heritage-listed, the Chimney Stack was added to Queensland Heritage Register in 1992.

If you’re feeling active, join in the Great Kilkivan Horse Ride,  an annual ride that brings together hundreds of riders to cross some of the region’s most picturesque forest trails on horseback. Alternatively, you can hop on your bike for the Kilkivan-to-Kingaroy Rail Trail, a branch railway corridor developed in the early 1900s. This one is not for the Sunday cyclist or the bitumen biker — it’s rustic and challenging (and beautiful) and will take you over 28 kilometres of rolling hills and farmlands to Goomeri. Be prepared for steep inclines and wade-able creeks, but the views from Cinnabar sidings and the French pastries at the Goomeri Bakery make it all worthwhile. 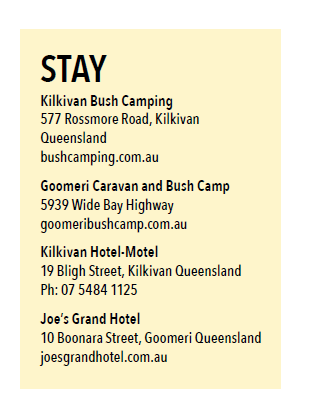 Gympie City is the commercial hub right at the centre of the Gympie region. The town is said to have saved Queensland from bankruptcy with discovery of gold in the 1800s. EIegant, turn-of-the-century buildings and a succession of charming Queenslander homes invoke memories of the town’s golden beginnings. For more goldrush history, you can visit the museums, art gallery and heritage railway or even try your hand at panning for gold. There’s also chic cafés, antique and vintage shopping, and weekend markets.

If it’s greenery you’re after, Memorial Park is a beautiful, heritage-listed park with wellmanicured gardens and an original band rotunda. Lake Alford Park is perfect for kids with its sparkling fountains, gentle walkways, duck pond and an all-abilities play area. There’s even an off-leash dog park so your pet will love it too! 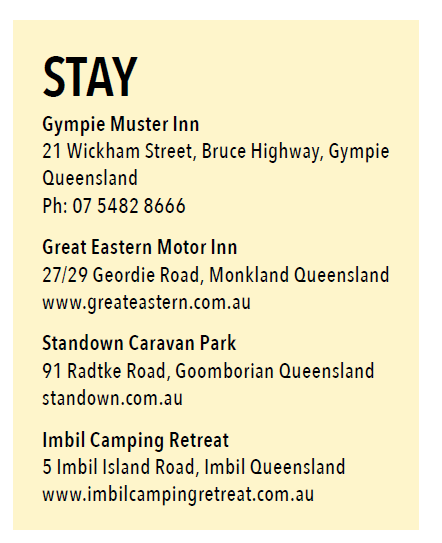