Oh I do love to be beside the seaside!

Australia is a unique country in many ways. Geographically speaking, its landmass will cover all of Europe quite easily and it’s larger than the lower 48 states of the USA. However, while Europe is heavily populated and there are certainly a plethora of towns and cities in the middle of the USA to visit, inland Australia has large tracts of nothing.

Even along the coast where much of our population lives, and given that Australia has one of the longest coastlines in the world and also more beaches than just about anywhere else, not all of it is easily accessible.

It’s quite easy to get to the coast in many places, but long coastal drives aren’t quite as prolific, hence there are some well-travelled and some not quite so well known coastal drives. Just about  each state has one, in some cases not so obvious and in some places a few dots on the map have to be joined up.

I mentioned beaches earlier and while these are restricted to four-wheel drives, one of the more interesting is the Great Beach Drive between Noosa and Hervey Bay in Queensland. It runs for 200km and is literally right on the beach. Fraser Island is something that comes to many people’s minds, but that’s just part of the attraction and can be visited along the way.

More conventionally and certainly able to be traversed in any motorhome or caravan is the Great Ocean Road in south western Victoria, between Torquay and Warrnambool. Built between 1919 and 1932, during the Great Depression, it’s a memorial to our WWI soldiers. It is immensely popular and well known,  even to those who haven’t been there. Covering everything from beaches, rainforests to the Twelve Apostles, it’s on many a traveller’s to-do list.

Some years ago we were in eastern Canada and a local tourist office advised us to get off the freeway and travel along a parallel country road. It was great advice and that’s exactly the case with the NSW Grand Pacific Drive (aka the low road) which starts about an hour south of Sydney at Stanwell Tops and follows the coast, with a few diversions around Wollongong, to Nowra. Undoubtedly the cantilevered Sea Cliff Bridge is what most visitors remember at the northern end, but there are some great sights to see along the way and that includes quite a few beachfront caravan parks. The dairy farming country around Kiama is particularly spectacular. 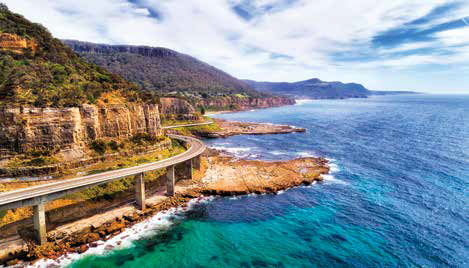 Western Australia can probably claim the prize for the longest coastal drive with its Indian Ocean Drive. From Perth to Ningaloo, it follows the coast for an impressive 1250km.

As you might imagine, there’s a long list of attractions, including the much-loved dolphins at Monkey Mia, wildflowers at the right time of year, snorkelling on the reef at Ningaloo and the Kalbarri rock canyons. For visitors from the east coast, it’s a drive that you need to have a month or two in hand to ensure the full appreciation of all the sights.

On the opposite side of the country, for those who like the reef and rainforest image of Queensland, then the Great Barrier Reef Drive from Cairns to Cape Tribulation has much to offer, not the least of which are the spectacular views and the chance to enjoy the charms and warm waters of the Great Barrier Reef, reached  by boat from either Port Douglas or Cape Tribulation. There is, of course, also the Daintree National Park with its rainforest which is a World Heritage Area. 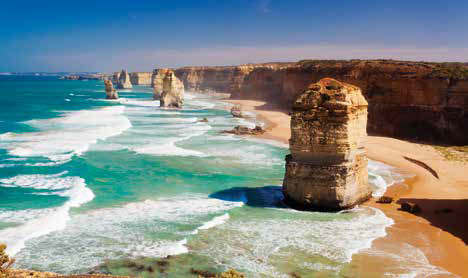 Some drives are very short, like that of the Bowman Scenic Drive in South Australia. Located around the town of Beachport, on the Limestone Coast, it offers great views and deserted beaches. Being close to Warrnambool, it could be considered an extension of the Great Ocean Road. One of Beachport’s claims to fame is that its jetty is 772m long and there’s a resident crayfishing fleet.

Finally, in the state that often gets forgotten, is the Tasmanian Great Eastern Drive from Hobart to the Bay of Fires. It’s not strictly a drive totally along a coastal road but does have on the agenda much for which visitors will remember Tasmania, including wines, waterfalls, wildlife and, of course, that monument to the convicts at Port Arthur.

Coastal driving is great, but something to keep in mind is that any environment close to salt water can be very harsh on vehicles, caravans and motorhomes. Anyone familiar with say the Sunshine Coast, QLD area will know that vehicles driven frequently on beaches often have corrosion problems, but that isn’t the only issue. Salty air can be pervasive in many areas of a caravan or motorhome, including the general paintwork and items such as brakes, suspension and engine components. Roof-top items like hatches and solar panels will also get quite dirty. Regular washing and cleaning is the fairly simple solution to reducing salt induced problems. Also important are regular inspections on any corrosion-prone items to make sure they are still functional. With those in mind, the Australian coast is yours to enjoy.