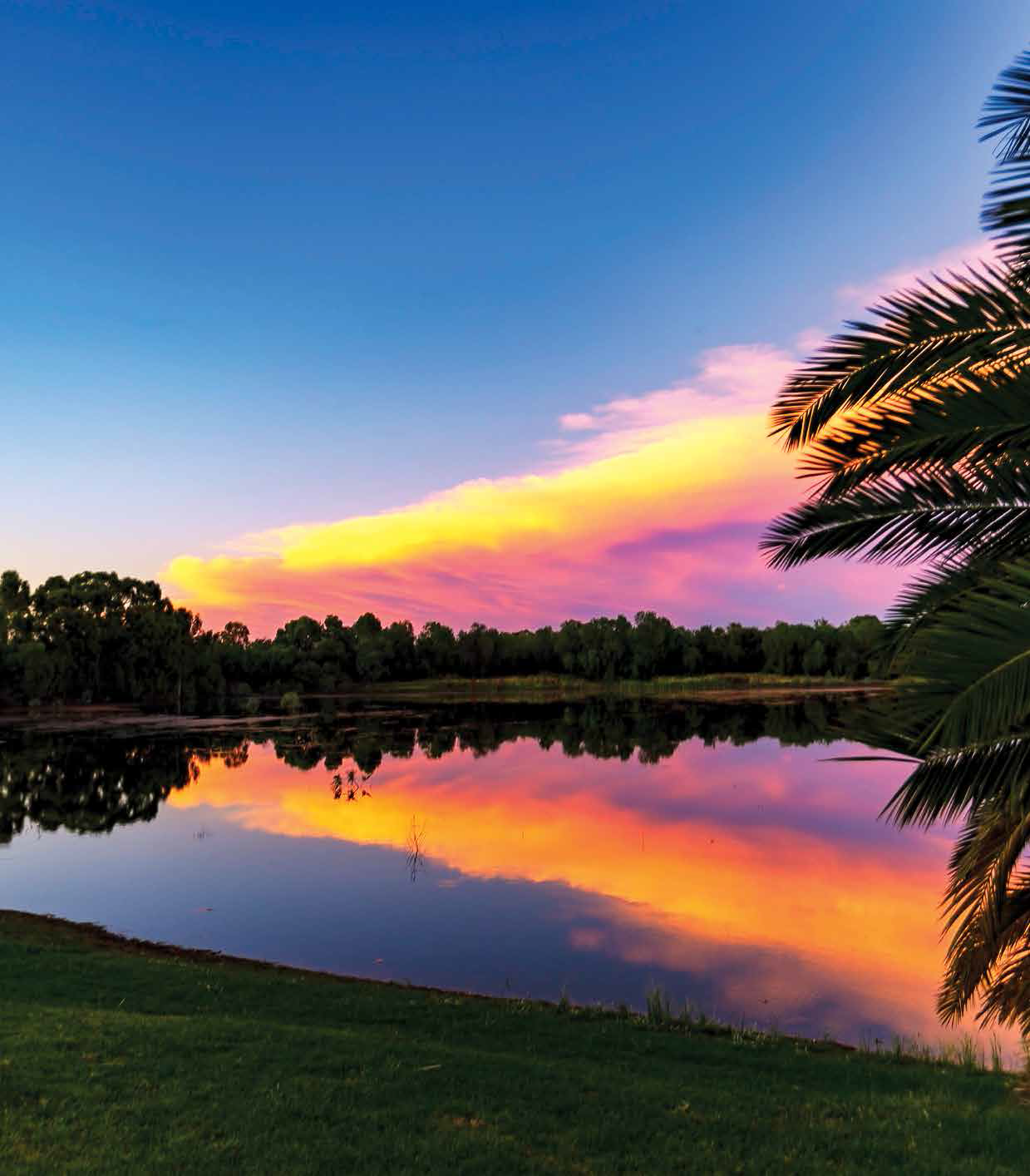 Rio, New Orleans, Sydney ...Cobar? When we think of the dancing-in-the-streets party vibe of Mardi Gras, Cobar doesn’t immediately spring to mind. But next April the stately streets of the central NSW town, better known for its copper mines than its party culture, will spring to life as Cobar hosts its inaugural Grey Mardi Gras.

For four fun-filled days and nights, from April 12 to 15, up to 1000 Grey Nomads and other visitors are expected to descend on the town 700km north-west of Sydney to enjoy a packed program of entertainment celebrating the 1950s, ‘60s and ‘70s.

There’ll be singing, dancing, a vintage car and caravan showcase, a Baby Boomers’ picnic concert and, of course, the obligatory Mardi Gras street parade. Everyone will be encouraged to dress up in clothes from the era. “There’ll be old-time dance lessons in clothing of the period, and a fashion parade through the streets with clothes from the ’60s and ’70s,” says festival organiser and tourism manager at the Great Cobar Heritage Centre, John Martin.

Preparations in town are well under way, says Mr Martin, with 300 vehicles already confirmed for the ‘Show and Shine’ vintage car and caravan display, while businesses in the town centre are finalising plans to decorate their windows for the street parade.

“We’ve had 100 percent participation from local businesses, which is encouraging,” he says.

The fun will kick off on the evening of Friday, April 12, with swing dance lessons, followed by a themed dinner. On Saturday, festival goers can start the day perusing the ‘Show and Shine’ exhibition at Drummond Park, before the vintage vehicles join the street parade through the town centre from 2.30 to 3.30pm. 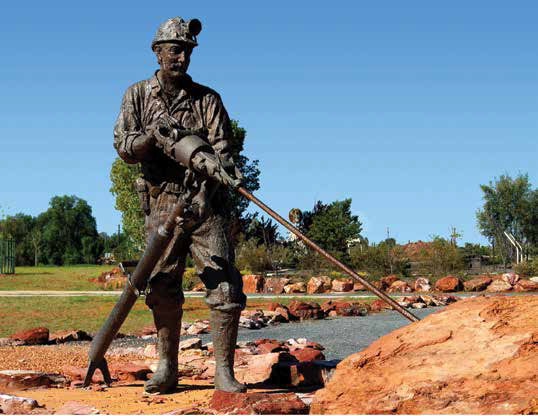 Along with local business floats and festival goers, they’ll make their way through town to the Ward Oval sporting ground, where the party will continue with a Baby Boomer’s concert and picnic.

Four bands, including John Farnham tribute band Whispering Jack and a Bruce Springstein tribute will entertain the crowd late into the night.

There’ll also be food stalls and a licensed bar to help keep the party going as well as an array of local craft stalls to peruse. Children will be catered for too, with face painting, clowns, a bouncy castle, and a mix of organised activities.

On Sunday morning, the Cobar Senior Men’s Swimming Club will host a swimming event at 10am, just the thing for those wanting to shake off the cobwebs from the previous night’s partying.

Then from noon, local groups and societies will host activities, including a game of golf, a bowls competition, and a clay target shooting contest, all designed to appeal to the Baby Boomer generation and Grey Nomads that the event is targeted at.

Mr Martin hopes the program will appeal to travellers from around Australia as well as locals, and expects from 900 to 1000 people to attend. He has enlisted support  from 180 caravan and motorhome clubs in every state to help promote the festival. 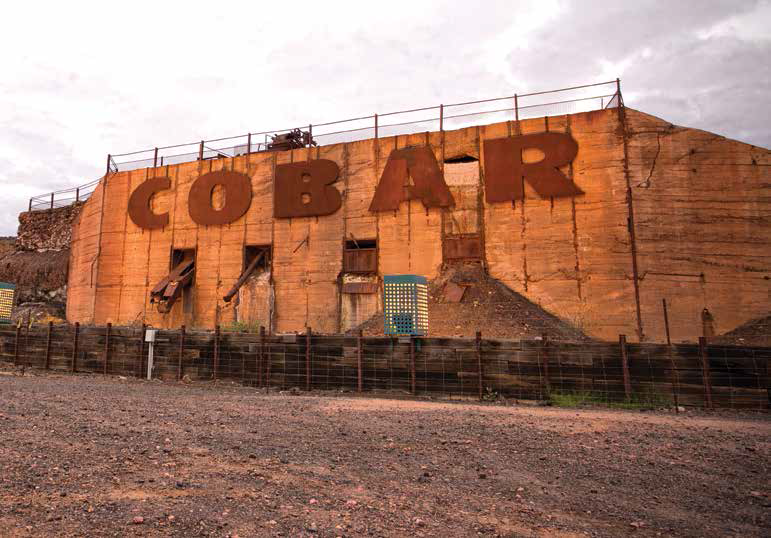 He says there will be plenty of organised camping facilities for RV travellers, with powered and unpowered sites at nearby caravan parks, as well camping at the Ward Oval. While pricing has yet to be finalised, he says fees will be kept to a minimum. 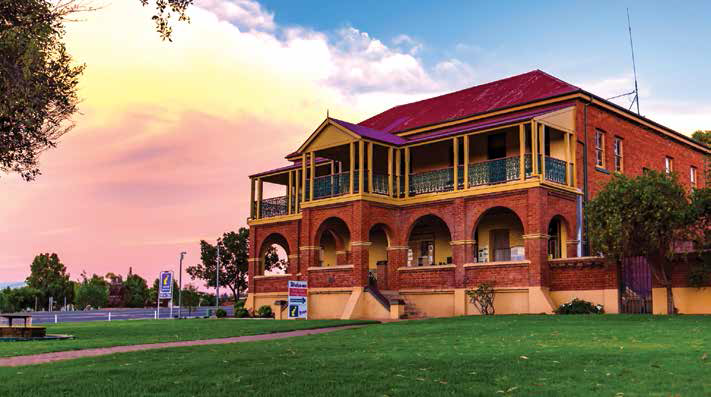 Some festival events will be free to attend, such as the street parade and vintage car display, while others including the Baby Boomers’ Concert and Friday night Dinner Dance will be ticketed.

The idea for the Mardi Gras was conceived last year when Cobar councillors and council employees met at a workshop to brainstorm new events for the township.

The council applied for funding from the Building Better Regions Fund (BBRF), a government program designed to help strengthen regional communities, and received a grant for the Mardi Gras early in 2018. In July, federal member for Parkes Mark Coulton, presented a $37,500 cheque to the Cobar Shire Council to kick-start preparations.

Mr Martin says the Mardi Gras is a substantial financial investment  for the town, costing the council more than $70,000 to host. 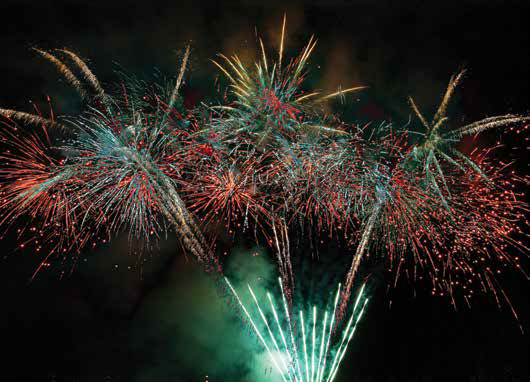 “A great depth of local people have helped to organise the event” says Mr Martin, explaining that the heavy lifting is being done by a group of local working people rather than any official committee.

Cobar is already a popular outback tourism destination, with visitors generating an estimated $15 million a year for the local economy. Mr Martin says thousands of Grey Nomads pass through the town every year during the high season, which typically begins in May.

He hopes the Mardi Gras will help extend the tourism season and boost revenue.

Once the festival has finished says there’s plenty more for travellers to see and do in the area. “Cobar is a bustling town with a mixture of old and new buildings – it’s steeped in mining and pastoral history,” he says.

Visitors can get an excellent insight into the town’s history at the Great Cobar Heritage Centre, located in the old administration building of the Great Cobar Copper Mine. At its peak, the mine was among the largest mining and processing operations in the world.

You can pick up a walking map from the centre to guide you on an hour-long heritage walk around the town’s grand historic buildings and other points of interest.

Several stately Victorian and Edwardian buildings around town point to Cobar’s past as a booming mining centre, sparked by the discovery of Australia’s largest copper deposit in 1870.

The story goes the deposit was discovered by three tank sinkers and their two aboriginal guides who noticed the unusual colour of the water while camping at Kubbu water-hole near town.

Their find set off a mining boom and, by the turn of the century, Cobar had a population of 10,000.

Although numbers declined after mine closures in the 1920s and ’30s, Cobar’s fortunes rose again in the 1980s on the back of gold, silver, lead and zinc discoveries. Today there are still five mines operating in the area.

Just outside town, the Fort Bourke Lookout offers spectacular views of the New Cobar Open Cut Gold Mine as well as panoramic vistas over the town and its surroundings. From the viewing platform, it’s easy to make out the rich Cobar mineral belt running in a straight line north to south.

Those keen to get a closer view of a modern-day gold mine in action, should head to the Peak Gold Mine, just south of town, where a viewing platform is just 100 metres from the working mine.

Other nearby attractions include the Gundabooka and Paroo- Darling National Parks, and the Mt Grenfell Historic site, 67kms north-west of town, where visitors can see wonderful examples of ancient Aboriginal rock art by the indigenous Ngiyampaa people, as well as ochre pits and scarred trees.

More intrepid hikers may like to tackle the 4km loop Mount Grenfell summit, where glorious views reward the extra effort. 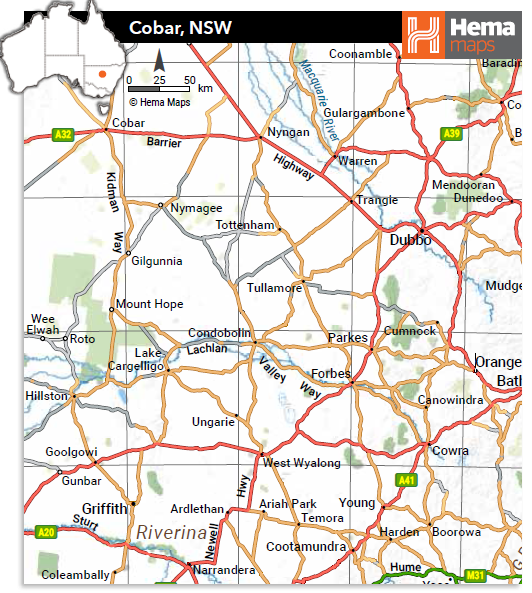 Cobar is located in central NSW, 712km north-west of Sydney, at the crossroads of the Kidman Way and Barrier Highway.

The Cobar Caravan Park offers powered sites from $35 per night, and a variety of cabins and motel-style suites. Facilities include a camp kitchen and BBQ area as well as a dump point and small kiosk to buy essentials. Pets welcome on campsites only. (02) 6836 2425; cobarcaravanpark.com.au

The Great Cobar Heritage Centre, open seven days a week, provides a fascinating insight into the town’s history and rich mining heritage. Entry: $12 per adult or $25 for a family. (02) 6836 2448

Fort Bourke Lookout, south of town, affords excellent views of the working open pit and entrance to the underground mine. Cobar is also a convenient gateway to several national parks and indigenous rock art at the Mount Grenfell Historic Site, an easy one hour drive from town. Phone (02) 6966 8100

The Grey Mardi Gras will be held in Cobar from April 12 to 15, 2019. For information visit  www.cobar.nsw.gov.au