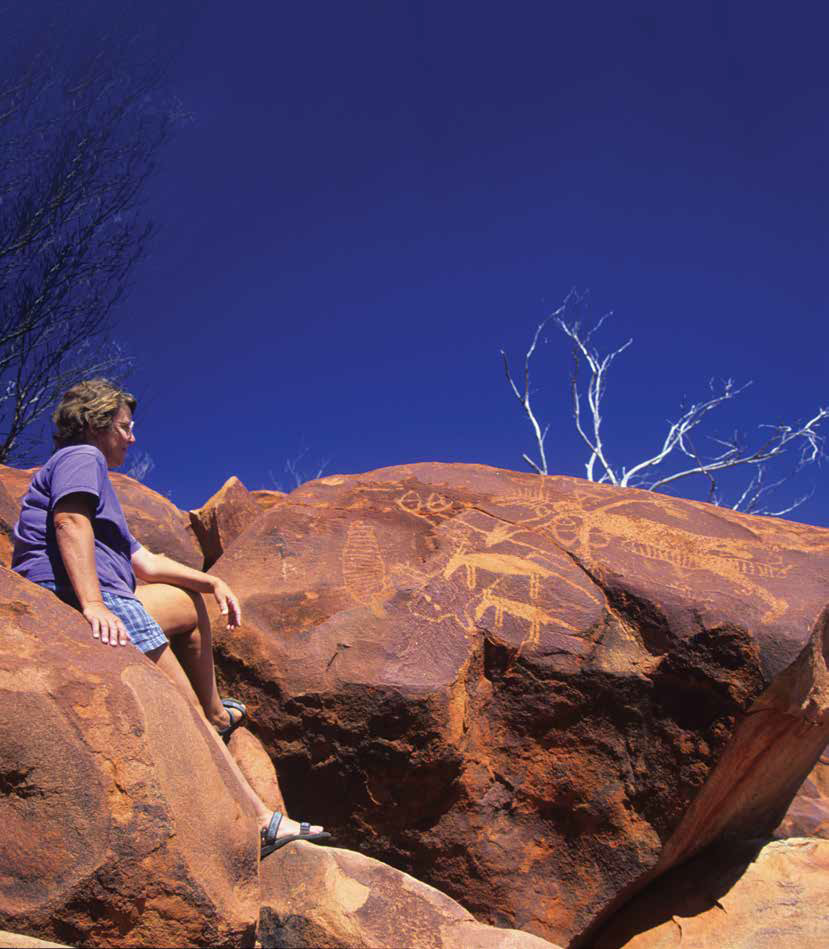 When we think of an art gallery in the traditional sense, our minds immediately turn to buildings in towns and cities around the country, where walls are crammed full of oil paintings and watercolours, with which we are all familiar.

However, few people realise that some of Australia’s greatest works of art are not actually hanging in galleries, but are resting on stone in remote, isolated bush land, far away from any form of modern civilisation.

Unlike the city display centres that offer a high degree of protection and preservation of their exhibits, Australia’s Aboriginal rock art galleries lie mostly open to the elements. Exposed to the destructive effects of sun, wind, rain, heat and cold, these priceless artistic pieces are slowly but surely disappearing – literally melting back into the landscape.

Not only are some of these works totally unique in their format and style, but if recent findings from dating studies being carried out on sites in the Top End of Australia are correct, some of this ancient artwork could prove to be the oldest of all known works in the world. Until recently, the oldest reliably dated rock art were 32,000-yearold cave paintings in France. More recently in South Australia, rock engravings have been dated to a minimum of around 40,000 years. In Australia we therefore have what must now represent the oldest, and arguably the most significant, ‘art galleries’ anywhere in the world. 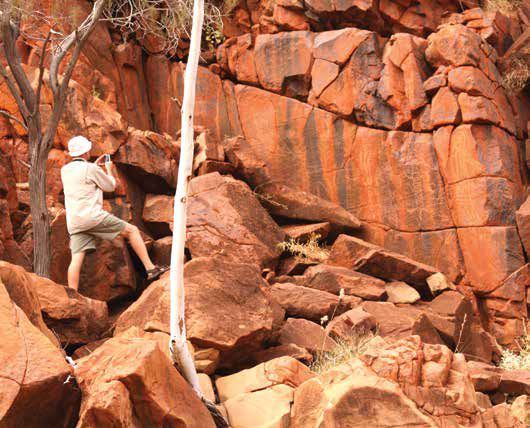 Strictly speaking, when we talk of Aboriginal rock art we should try to disassociate our modern (Western) perception of ‘art’ from it altogether. Whilst it certainly involved a level of artistic skill with presentation and technique, authorities are doubtful that any of it was developed as a purely artistic creation. Much of this ancient ‘art’ was set down on stone as a means of recording events, places, religions and dreamtime beliefs, spirits and ancestral beings, habits, rituals and ceremonies, with each symbol, drawing or figure having an underlying story or meaning. Some more recent Aboriginal rock art seen around the country depicts the coming of Europeans with examples  of old sailing luggers (Macassan, Dutch or French), men with hats and rifles, and explorers or drovers riding on horseback.

Limited to naturally occurring materials available from the land, the techniques used in rock art seem to be restricted to two main types – petroglyphs and pictographs.

Petroglyphs (engravings or etchings), often found on hill sides or rocky outcrops, were made by scratching, pecking, pounding, or abrading a rock surface – thus chipping out pieces of the rock itself. This painstaking work was mostly carried out using hard, sharpened rocks like chisels or stone axes. It is generally believed that engravings found at many sites around Australia are much older than paintings (pictographs) as they withstand the erosive forces of nature much better. 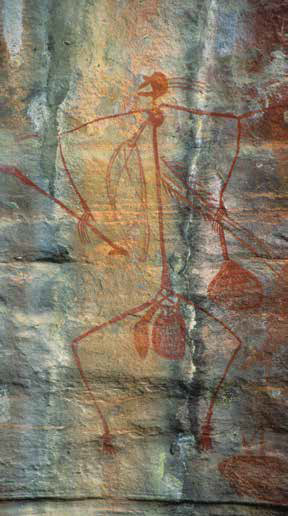 The other main form of rock art, pictographs, includes drawings and stencils where an actual pigment is added to the rock surface. This form of art is most often found in caves, under rocky over-hangs, or on cliff walls sheltered from prevailing weather. Stencils were often made by blowing or spitting the ground-up pigments (ochre, clay and oxides) out of the mouth onto a hand, foot, or other object pressed close against the rock surface.

In most rock paintings, the pigments are crushed on a flat stone and mixed with water (or sometimes with blood or animal fats). The paint mixture is then applied by brushes made from human hair, fibrous strips of bark, pandanus palm or other tree roots, feathers, or by using fingers.

In a brief look at art sites around the country, the different styles, shapes, figures and symbols  found in different regions is quite noticeable, reflecting the completely separate and diverse life styles led by Aboriginal tribes or communities across the land.

In Central Australia at Roma Gorge in the West Macdonnell Ranges, and also south of Alice Springs at Ewaninga, ancient rock engravings (or etchings) depict animals, animal tracks (kangaroos, emu and others) and hunting implements. There are also a large number of works depicting abstract circles, wavy lines and symbols, which refer to nearby water and the sun. But the meaning of others, because they predate any recent generations of Aborigines, has been lost in time – the knowledge literally ‘died with the old folk’.

In some areas the art is regarded by Aborigines as the work of ancestral heroes, such as the striking ‘Wandjina’ figures found in the Kimberley dating well back into the Dreamtime. The Wandjina are portrayed as stylised human figures, faces with a head, halo, eyes, a nose, but no mouth. They now guard tribal spirits, especially around Aboriginal burial sites. Successive generations would record their association with the spirits by repainting them on the rock (done by male members of each generation). Pigment build-up at some sites has been found to measure as much as 7mm thick – 25 or more layers – on the gallery walls. 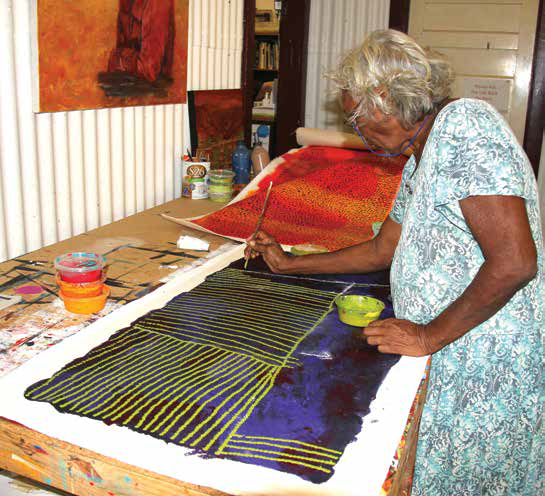 Artists at work at the Roebourne Art Centre in the Pilbara, WA

At some of the most well-known Aboriginal art sites in Australia – Ubirr and Nourlangie in Kakadu National Park, home to the well known ‘x-ray’ style paintings – it is also easy to see how the galleries have been used as a moving, or updated, record. The old faded works made by past generations form the background for new figures and symbols super-imposed over the top in more recent times.

In some areas, works that have been seen to be important have been repainted or touched up to preserve their message and presence. Such work was traditionally carried out by tribal elders who knew their meaning.

Another interesting aspect of Aboriginal art is the different feelings that Aborigines themselves hold for different art, even within their own traditional tribal areas. Early prehistoric art, sometimes believed to be painted by spirit people, is in some instances regarded as ‘rubbish art’ as it retains no cultural significance to current Aboriginal generations. Such ‘rubbish art’ includes the strange Bradshaw figures in the Kimberley. Named after the first European to discover them, explorer and pastoralist Joseph Bradshaw, these little dancing figures with girdles and bracelets are apparently considered to be useless, ignorant beings of no value to current Aboriginal generations.

The area around Laura in northern Queensland is home to the ‘Quinkins’, evil spirits that are believed to live in the local sandstone escarpments. Apart from the well-known split rock and Guguyalangi galleries, this area has over 1,000 recorded sites containing a wide diversity of styles, messages and purposes. One notable site depicts yam spirits. ‘Sorcery’ figures, or devil figures, are another commonly found art figure right across the Top End of Australia.

The Pilbara region of WA on the other hand has few paintings, because of the lack of suitable sandstone rock caves and overhangs, but it has what is probably the most intensive rock engraving sites to be found anywhere in the world. Many thousands of individual pieces of art are to be found in this region. The rough, dark granite and dolerite rocks found throughout the Hamersley Ranges, and rocky outcrops in the adjacent desert regions, the Burrup Peninsular and even on offshore islands, have a shallow coating of iron oxide (caused by weathering over a long period) which Aborigines in the area found could be chipped away to reveal a light coloured under-surface. By this method an engraving with a strong colour contrast was created. 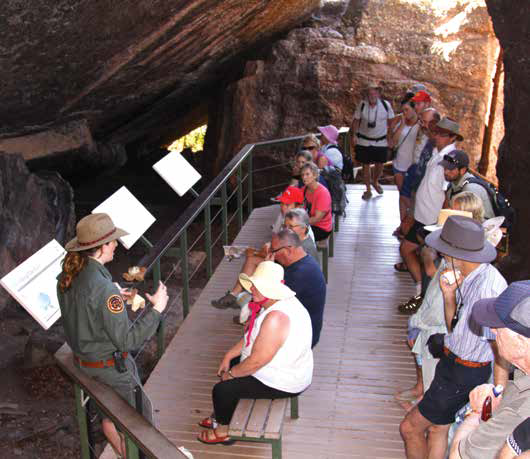 Throughout Australia there are over 100,000 rock art sites of significance so far recorded – many of which are in isolated areas where access is extremely difficult.

For those of us who are interested in viewing some of our nation’s finest works, fortunately there are still a sizeable number of sites within easy reach of travellers, with some areas developed for visitors much more than others. In fact, quite a few of our national parks and reserves around the country provide good opportunities to walk on marked trails through the bush to some really first-class rock art sites.

In some places, like Kakadu (NT), Laura (QLD), Mutawintji (NSW), and Arnhem Land (NT), Aboriginal custodians of the sites, or local rangers, conduct guided walks which provide a valuable insight into the art, the various styles to be found, and the meanings being conveyed.

When the urge next hits you to visit an ‘art gallery’, perhaps you’d better go prepared for more than just an hour or two in the city – get out to more remote parts and see some of Australia’s oldest works. When you arrive at a site, take your time to sit and experience the ambience of the gallery and surrounding area. Try to imagine the scene, hundreds, even thousands of years ago, when generations of Aborigines sat in this same spot creating their stories on the rocks and relaying to those around them their Dreamtime tales, legends and beliefs. Don’t leave your visit for too long – it might soon be too late. And remember, when it’s gone, it’s gone forever. 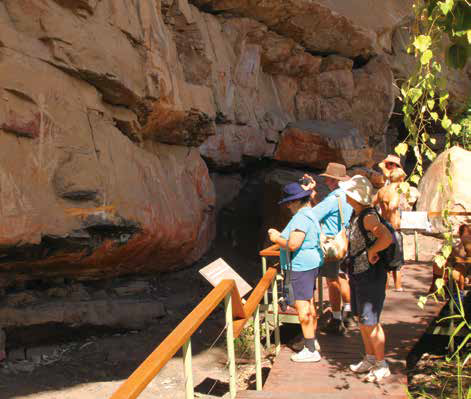 When visiting either a well-developed site in a national park, or a little-known area you’ve found hidden away somewhere in the bush, remember:

• Rock art sites are extremely vulnerable to damage, and most are already in the process of slow deterioration. It is important not to touch the art work or to stir up dirt or dust around them.

• Do not lean on the rock surfaces, stay behind any barriers or fences that have been erected, and stick to any marked trails.

• Try to make sure any children in your party understand the significance of the area and curb their natural desire to run around and climb over everything in sight.

• It is believed highly likely that there are still many art sites, particularly in remote places, which have not been recorded. If you find a site which may fall into this category, report it to the nearest Aboriginal authority and otherwise try to keep it quiet. The fewer people that know about it (especially before opportunity is given to provide adequate protection and signage) the better chance of long-term preservation it has.

• Additionally, as if anyone needs reminding – all sites are protected by law and it is illegal to disturb, damage, destroy, deface or desecrate any Aboriginal site or object, with heavy fines applying. It is also illegal to remove or collect any Aboriginal objects from sites. Leave things exactly as you find them and no trace of your visit behind you.

• Hand stencils, one of the most common forms of rock art it seems, have various meanings depending on where they are found. In some areas they are like an individual signature of the artist. Elsewhere it has the meaning of a calling card, and in some places it is thought to have been used to indicate the number of people who live in the area. One of the most extensive galleries containing this style of art is found at Carnarvon Gorge in Queensland.