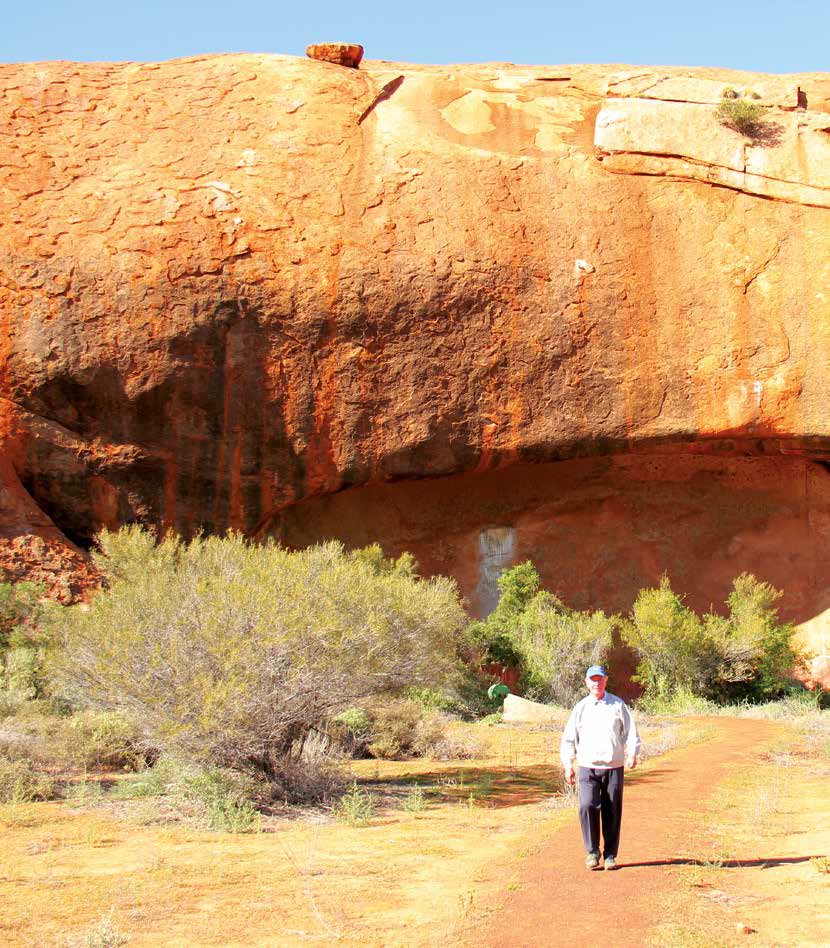 There is no doubt that RV travellers right around the country are spoilt for choice on wonderful scenic places to visit and experiences to enjoy along the way. Yes, we all love majestic mountain, coastal or outback vistas and lots of other appealing places. Scattered right across Australia, however, sometimes hidden away out of sight off the main highways, are a bunch of very different attractions that travellers are starting to encounter or even seek out to add more interest and fun to their RV adventures. What we are talking about here are sights (some man-made, others created solely by Mother Nature) with a curious twist. Many are hard to believe, leaving us wondering how or why. One thing’s for sure, you’ll be satisfied you made the effort to find them. Here we have picked out a few beaut ‘Ossie Oddities’ worth checking out during your travels and you can get to see them all in a conventional (2WD) vehicle or RV.

Known to the local Aboriginal community as ‘Walganna’ or ‘Wolgarna’ Rock, this large 2km-long granite monolith features a significant ancient art site depicting snakes, emus, kangaroos, boomerangs, footprints and hand motifs – some of which have been carbon tested to be around 10,000 years old. The most intriguing painting here in white ochre (some 300km inland from the coast) is of a mystery 17th or 18th Century sailing ship, complete with masts, rigging and portholes. It has all the experts puzzled. How, when, why and what about that ‘Arabic-style writing’ underneath it? Or are these simply waves under the vessel? There seems to be several main theories about this ship painting: was it done by an Aboriginal who witnessed one of these ships sailing along the WA coast? Or perhaps its origin relates to an early Afghan trader during the Murchison gold rush in the late 1800s? Another theory is that it was done by a survivor from one of the many shipwrecks on the WA coast, but how and why would he have come 300km inland across such uninviting, inhospitable country? Some argue only a sailor would know the shape of the ship’s hull shown in the painting! The mystery and conjecture continues – call in and see for yourself and make up your own mind! 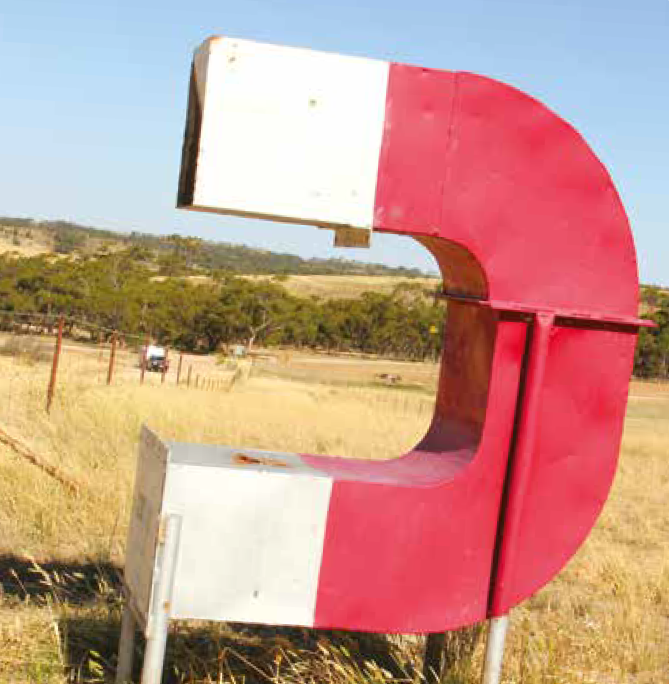 WHERE: 23km south of Orroroo, SA

In the undulating hills of the lower Flinders Ranges south of Orroroo, a signposted road leads to what is locally known as ‘Magnetic Hill’ where you can experience your vehicle seemingly rolling uphill! At this site, there is a sign erected on the side of the road inviting you to stop, turn off your ignition, put your gear lever into ‘neutral’ and release the brakes. As you then quietly sit in your vehicle, it will begin to roll up the hill! Well, in reality it is not quite a hill, but more of a very gentle incline. No-one quite understands the forces at play on this hillside or how they were first discovered. Perhaps it has something to do with a giant magnet which has been erected inside a farmer’s fence 50m or so from the sign, some quirk of nature or maybe it is simply an optical illusion? There is also a sign at the site warning visitors who might have hip or knee replacements to ‘hold on’! Magnetic forces indeed! 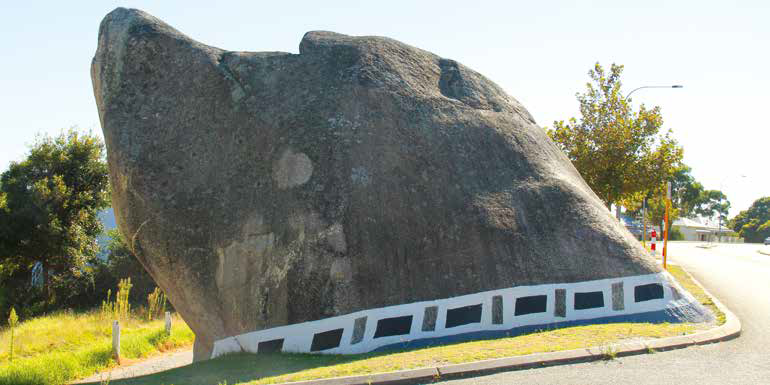 Standing not far from the centre of town on the verge in Middleton Road is Albany’s well-known local icon – ‘Dog Rock’. Bearing an uncanny resemblance to a  dog’s head, the rock now sports a distinctive painted collar around its ‘neck’. This well-loved canine apparition (looking quite like a Labrador sniffing the air) is, in fact, one of the most photographed landmarks in this very scenic  coastal town. Dog Rock, however, is not just a rock sitting on the ground here in Middleton Road. It is the tip of a huge underground granite boulder protruding through the earth’s surface. This is a ‘must see’ on any visit to Albany. 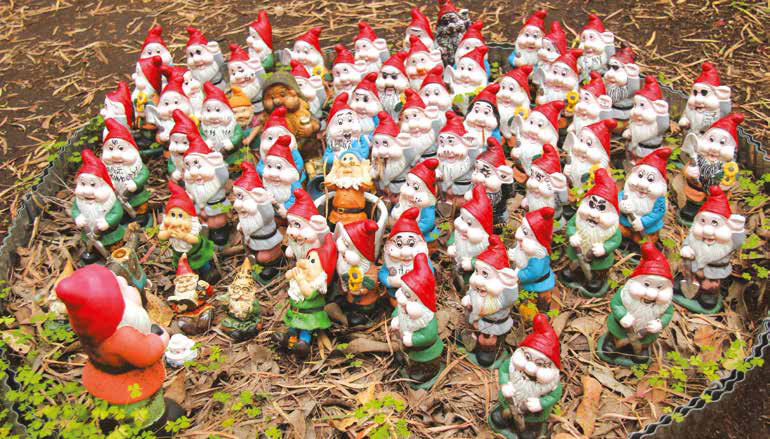 WHERE: 35km southeast of Bunbury, WA

When you wander down the street and see astronauts, beach bums, buskers, cricketers, musicians, pilots, caravanners and many, many more characters all within a few hundred metres, you quickly realise you have arrived in a most unusual, special little town.

You see, each of the residents in this community is a gnome, with his or her own story to tell. This might all sound like a bit of a fairy tale from the bottom of the garden, but the place called Gnomesville really does exist and, in fact, is touted as the fasted growing town in Australia, but no people live there! The story on how it all started a number of years ago with just one gnome placed here in a newly built intersection roundabout is quite intriguing. Clearly though, the idea  rapidly took off and outgrowing the roundabout (where a gnome cricket match got underway), the Gnomesville community moved across the road and spread into the bush along pathways and down by a nearby stream. Visitors are encouraged to bring a gnome, write a message and leave it there to join the now estimated 8000+ other free spirited gnomes with imaginative tags like Beachgnomer, Gnoming Old Gracefully, Always Away Camping – Never Gnome, Gnome for Wayward youths, a Funeral Gnome, Gnome on the Range, Gnomasexual, Guard’n Gnome, Snow White and her Seven Gnomes, rock bands like the Rolling Gnomes, the Gnome Ranger, and many more. Gnomes always enjoy company, call in and have a look – you’ll love it. Entry is free. 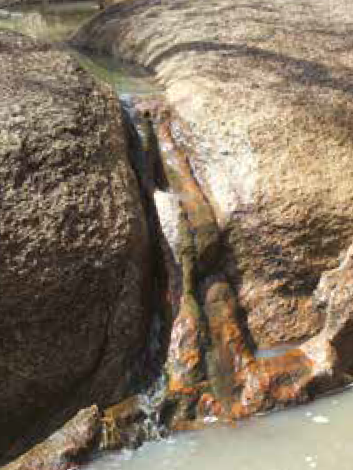 WHERE: 6km south of Tingha, NSW

Hidden away in the bush on the New England Tableland is an intriguing natural feature in the middle of a small waterfall. Formed by the process of erosion of the rocky creek bed by water flowing downstream in Rooneys Creek, the resultant shape has an uncanny resemblance of a naked young woman lying head first down the waterfall. Known as the ‘Tingha Stone Woman’, this fascinating figure has provided an important  spiritual, ceremonial and meeting place for local Aboriginal people for hundreds of years, and still is central to a traditional women’s gathering and teaching site. The Aboriginal Dreamtime interpretation tells of a young girl who disobeyed her tribal marital laws by sneaking off into the night to meet a stranger from another tribe, with whom she had fallen in love. As punishment the young ‘love-sick’ maiden now lies hidden in the bush – she sleeps there all alone still waiting for her lover! 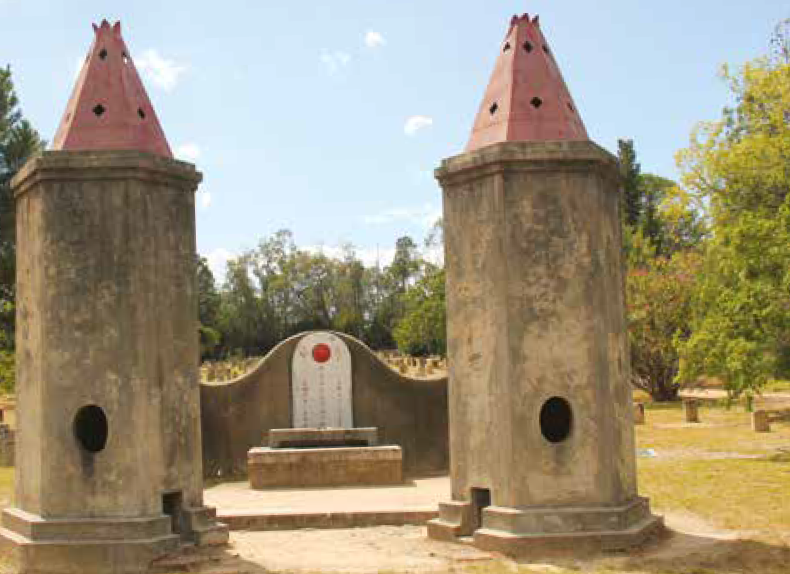 This story goes back to 1852 when a rich deposit of gold was discovered at Spring Creek, and  within 12 months the shanty town of Beechworth rapidly built up a population of more than 10,000 people. Back in those heady gold mining days the area also attracted  thousands of Chinese who were not only involved directly in prospecting and mining, but also in providing supplies (including vegetables), stores and services to the miners and their families.

Living conditions for most people in those days were extremely harsh and the many graves in Beechworth Cemetery, including some 2000 of Chinese descent, tell their own sad stories. In Chinese culture of the day, mourners attending burials would burn paper tokens, prayer sheets, even paper money and small offerings of pork and wine were left at the site to sustain the departing spirit, accompanied by the smoke and ashes of the burnt offerings.

The restored Chinese burning towers still seen today were built in the Beechworth Cemetery in 1857 for use in their ritual ceremonies; the adjacent alter built some years later in 1883 became the place where meals for the departing spirit would be left. Accompanying all this were exploding fire crackers which were used to scare away devils and evil spirits. Quite fascinating indeed! 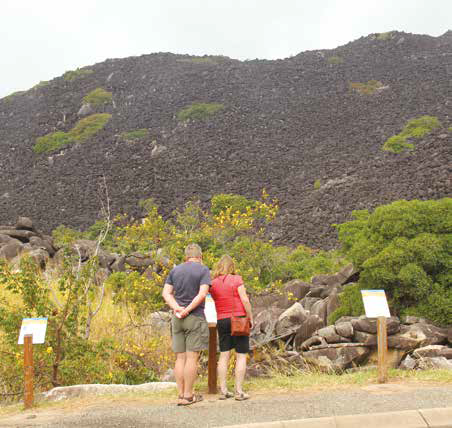 WHERE: 25km south of Cooktown, QLD

Far north Queensland is home to what is probably the nation’s most mysterious and quite notorious landmark – Black Mountain. Geologically, the mountain is 465ft (141m) high and comprised of a massive heap of loose granite boulders that look like huge chunks of black coal. Many of the precariously balancing rocks are as big as cars, even houses, and the gaps formed between them go deep into the mountain. These large gaps lead to thousands of caves, chasms, tunnels and shafts heading off in all directions – giving the whole mountain a sinister, forbidding appearance. This spooky mountain is rumoured to be alive with devils and ghosts according to local Aboriginal lore as well as snakes, poisonous plants, bats, huge rock pythons, and a foul, gaseous smells. It is also a site where numerous lives have been lost over the years – with people climbing into this maze of dark caverns becoming disoriented or overcome with fumes. At times, the mournful sound of the wind in the chasms is quite unnerving! This is indeed an eerie, creepy place which, fortunately today, can only be viewed from a lookout with no rock climbing or entry into the site allowed – phew! 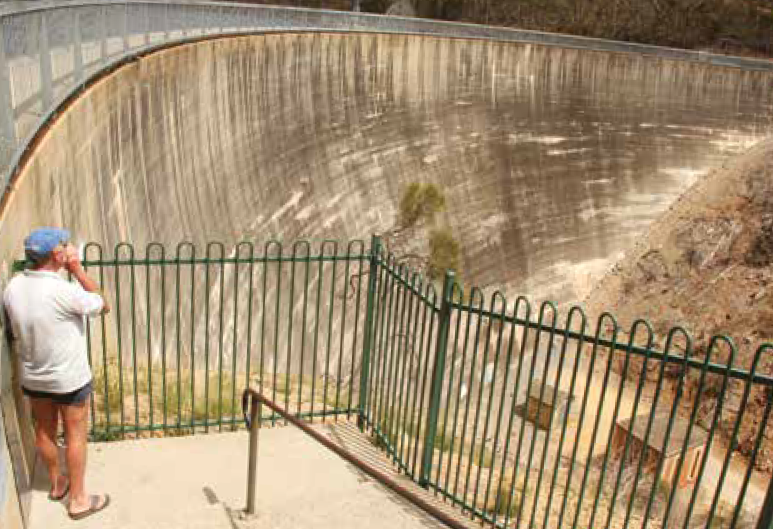 WHERE: 13km south-east of Gawler, SA

Built more than 100 years ago, from 1899 to 1902, the Barossa Dam wall is 36m high and spans Yettie Creek, holding back thousands of megalitres of water in the Barossa Reservoir. What makes it unique is its strange acoustics, unintentionally created during construction. When you stand at one end of the gently curving wall, anything you say, even in quite low whispers, reverberates the full 140m length of the structure to be heard by someone standing across the other side. This is a truly phenomenal experience, which gives rise to its name ‘The Whispering Wall’. No dam wall anywhere in the world is known to replicate its intriguing qualities.

GOBLINS IN THE BUSH

WHERE: 25km west of Pemberton, WA

Now, you might be like a lot of people, and believe that goblins simply exist in a world of fantasy. But after a visit to Goblin Swamp, there is a good chance you might well change your mind.

Following a 500m walking trail off Donnelly Boat Landing Road,  is the strange, eerie sight of old tangled, tortured-looking melaleuca trees. Spread over several hundred square metres, the vision of these poor, gnarly, twisted shapes will take your breath away.

What forces of nature have been at work here to create a virtual forest of weird, mysterious shapes  so much out of character with the delightful, easy walking bush trail that leads here? With little imagination, this whole place, in fact, seems to be an ideal home for a family of goblins or other ‘out of this world’ creatures – indeed it looks like the area has been specially made for them. 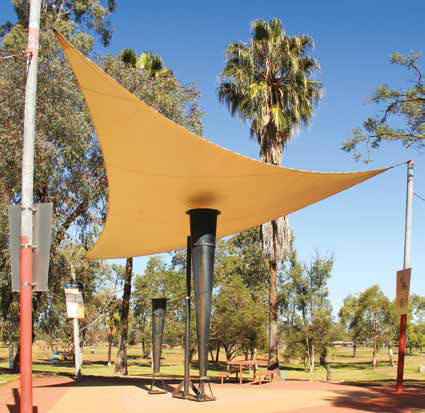 This curious piece of Aussie history goes back to 1902 when the area around Charleville was in the grip of a terrible drought that lasted for six consecutive years. Things were getting extremely desperate and the answer seemed to come when renowned meteorologist Clement Wragg arrived in town, with a plan to use Vortex guns to make rain. History had shown that these gas belching canons had been used in thousands of locations across Europe with much success to dispel hail-bearing clouds from destroying crops and vineyards. These strange looking canons are loaded with gunpowder causing an explosion forcing gas out through the gun’s funnel. This upward surge creates a pressure wave that changes the atmospheric pressure within the clouds, creating rain. Well, that’s the theory anyway. On September 26, 1902, when suitable clouds formed overhead, six of these huge 4m high canons positioned around town and synchronised with plenty of ceremony and with huge bangs were all fired off together. The result was certainly a lot of noise, but on the rainmaking front, nothing happened! Most of the guns ended up as scrap metal, but two were retained and are displayed in Graham Andrews Parklands in Charleville.