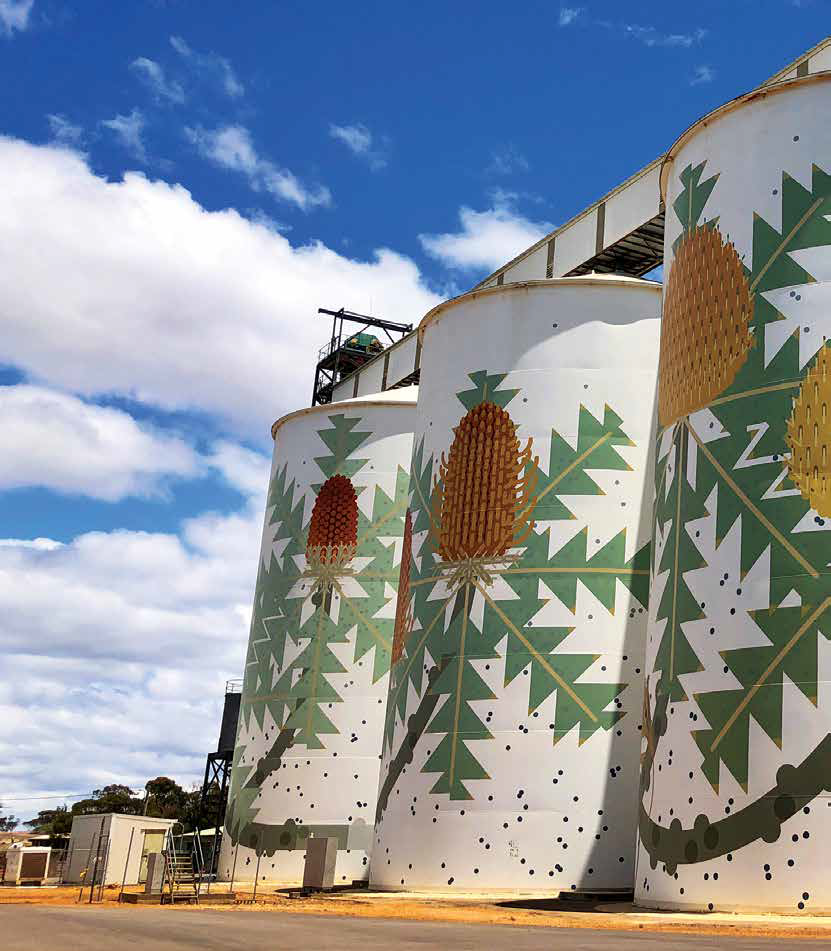 The Australian Silo Art Trail is the world’s largest outdoor gallery stretching well over 7,000km and the movement is gaining momentum every day. The Australian Silo Art Trail Collection is the work of one dedicated silo trail enthusiast, with the help of one very loving husband who aids in driving her around the country to see, photograph and help document them all.

We are Eric and Annette Green. We started our ‘Great Australian Adventure’ back in March 2018 when we headed out from Mandurah in Western Australia to see and visit as many towns as we could along the way.

Very early on in our trip, Eric took me to see my first painted silos in Ravensthorpe, Western Australia. This one experience was to change my life forever. I was hooked!! I took a million photos and could not wait to see my next set of painted silos. 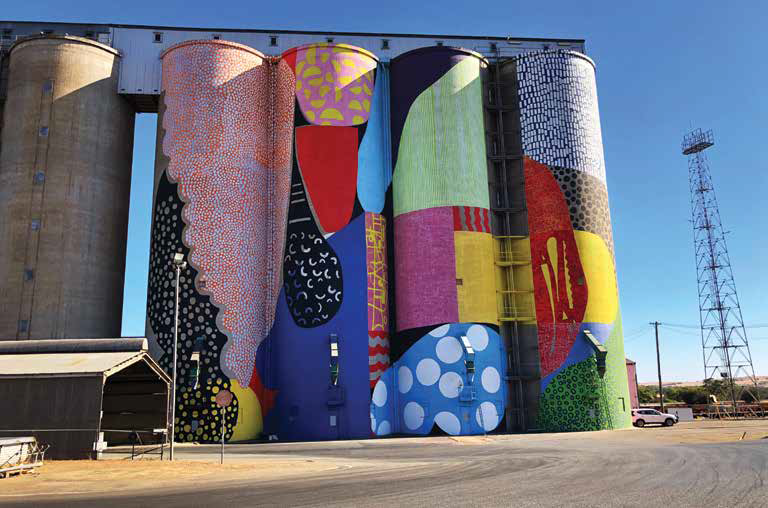 FORM WA for CBH Group; PUBLIC Art in Northam by Phlegm and Hense

WHERE WERE THEY ALL?

There was hardly any information about them on the internet, so I created the Australian Silo Art Trail Facebook page. Initially, the page was mainly so I could document the ones that I had visited, but it was also for other Australians, so they knew where they were as well.

Immediately after its launch the Facebook page exploded with interest with followers reaching over 23,000 in just nine months. People were amazed that the silos even existed and rapidly shared this information with their family and friends.

Followers were excited about their own travel experiences and needed a platform to share their photos as well, so a community group was created to enable members to share their memories with others. The group now boasts close to 28,000 members, has over 100 community posts submitted to it every week and currently averages 550 new member requests to join every week as well. 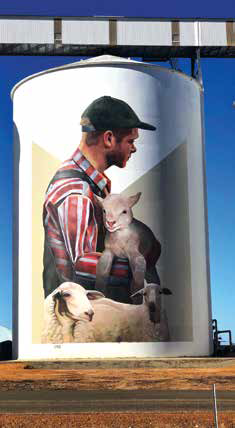 PUBLIC Art in Pingrup by Evoca1

HOW DID IT ALL BEGIN?

It all began in March 2015 when FORM WA created the PUBLIC Silo Trail in Western Australia by painting the first ever CBH Group grain silos in the wheatbelt town of Northam. They engaged two world renowned artists, Phlegm from the US and Hense from the UK, to paint at the time Australia’s largest outdoor murals.

Little did they know that this concept of painting silos would infuse a nation with newfound energy and enthusiasm. It would set a trend in motion to encourage people from cities and country towns alike to get into their cars, caravans, motorhomes and even tour buses to journey along what is now considered Australia’s number one road trip. 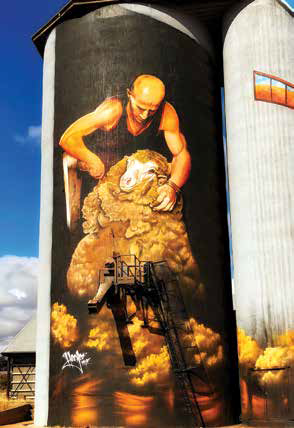 Before long Australia had its second painted silo, this time in the small country town of Brim in the Wimmera-Mallee region of Victoria. The Brim committee chose Australian artist Guido van Helten to paint their silos and they were painted in Guido’s now signature monochromatic style. Guido van Helten has since become one of the world’s leading large-scale mural artists and completed many works of art in countries such as the US, Dubai in the United Arab Emirates, Mexico and Spain to name but a few.

January 2016 also marked the beginning of the Silo Art Trail in Victoria and the Australian Silo Art Trail Collection now consisted of two. During 2016 the ‘trend’ started to move with another three being completed in that year. These were Ravensthorpe in Western Australia along with Patchewollock and Sheep Hills in the Wimmera-Mallee region of Victoria. By the end of 2016 there were five painted silos in the collection, two in Western Australia and three in the ‘Silo Art Trail’ of Victoria.

In 2017 the trail went from five to 14 as another nine were completed during that year. The ‘trail movement’ had now spread across five states that stretched from  Western Australia, South Australia, Victoria, New South Wales and Queensland. The new additions were all from country towns except one and the ‘theme’ of the ‘trail’ was changing. It was now not just about the silos themselves and the epic artwork upon it, it was about the towns, the communities and the people within them. 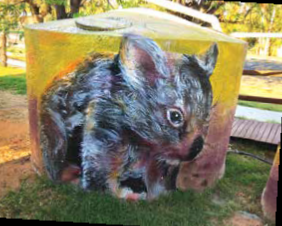 Australia is facing one of its worst droughts in recorded history and small towns across Australia are suffering. Between 2017 and 2019, severe drought developed across much of eastern and inland Australia including Queensland, New South Wales and Victoria and it also extended into parts of South Australia and Western Australia as well.

People are walking away from their farms, and small businesses in affected towns are feeling the ‘pinch’. So, what can small towns do to save their towns, attract visitors and grow tourism. Many have chosen to join the movement and paint their silos!

Many Silo Art Committees have been formed with extensive grant writing and fundraising over months and months taking place. These communities have all pulled together to work as one to achieve the same goal of saving and promoting their towns. Wonderfully in the end their hard work pays off and their silo joins the Australian Silo Art Trail Collection. The committees can then sit back and watch their hard work payoff as they see the cars and RVs roll into town, with people spending money at their local bakery and coffee shops. Weary travellers stay in their caravan parks and roadside camp sites and dine at their local pubs.

Silos are not the only large canvases being rejuvenated. Water towers are also being painted and to date I have recorded over 40 painted water towers across Australia. These towns need our support also. They have also formed committees, worked hard and fundraised as above.

The Australian Silo Art Trail expanded further in 2018 with another 11 silo art works added to the list. The collection now consisted of 25.

The silo art movement is not over yet with 2019 already seeing another eight silos being completed at this time. Both Devenish and Goorambat in Victoria have engaged their artists to revisit their towns to complete stage two of their projects and from what I have heard on the grapevine 2019 is shaping up to be the Australian Silo Art Trail’s biggest year yet and we are only halfway through it!

IS IT ALL WORTH IT?

Yes, it is! Tumby Bay in South Australia painted their silo in 2018 and it has been reported that the local self-contained RV park occupancy numbers have doubled in the last 12 months. The local bakery is booming and the recently opened French Café is drawing a following.

During the month-long creation of the silo mural in Coonalpyn, South Australia, the town became the most-photographed regional town in South Australia, and possibly even Australia. During the painting process, an estimated 40 to 50 vehicles stopped each hour in Coonalpyn to take in the sights and to view the artist at work. The town also hosted an RV festival called ‘Silo Sights’ to coincide with the mural painting which attracted more than 100 people to the small local caravan park and further injecting thousands of dollars into the local economy. Three new businesses have opened in the town as a direct result of the silos being painted including the aptly named Silos Café and nearly a dozen new jobs were created in 2017 as well.

The Gunnedah water tower museum in New South Wales now has more visitors passing through their doors in a week, than they ever did in a year and it’s all because they painted their water tower. Towns, residents and communities across Australia are benefiting from all their hard work as tourists now have even more reason to stop and spend some time and money in their community. 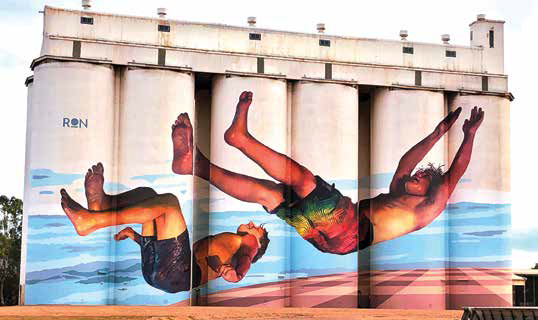 But we can help them more by following the Facebook page and helping the towns to be heard. We need to keep spreading the word about these great works of art. Most of all, as you travel to these epic silos and water towers, remember the people, the committees and the hard work they did in creating the attraction. Support their towns, stay overnight, fill up your car with fuel and buy a pie and vanilla slice from the bakery.

To start planning your next silo art trip, find the map of all the silo art and water tower locationsaround Australia, by visiting www.australiansiloarttrail.com, and if you would like to join the Facebook group, search for Australian Silo Art Trail.

As an avid follower of the silo art movement it’s been wonderful to watch it grow from its humble beginnings to the magnificent collection that it is today. 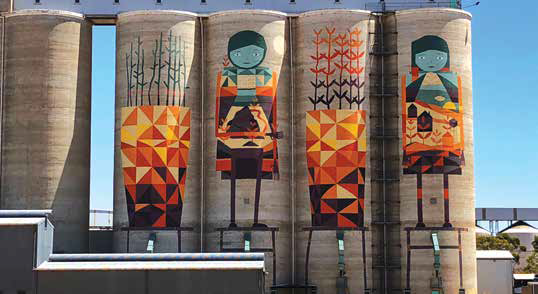