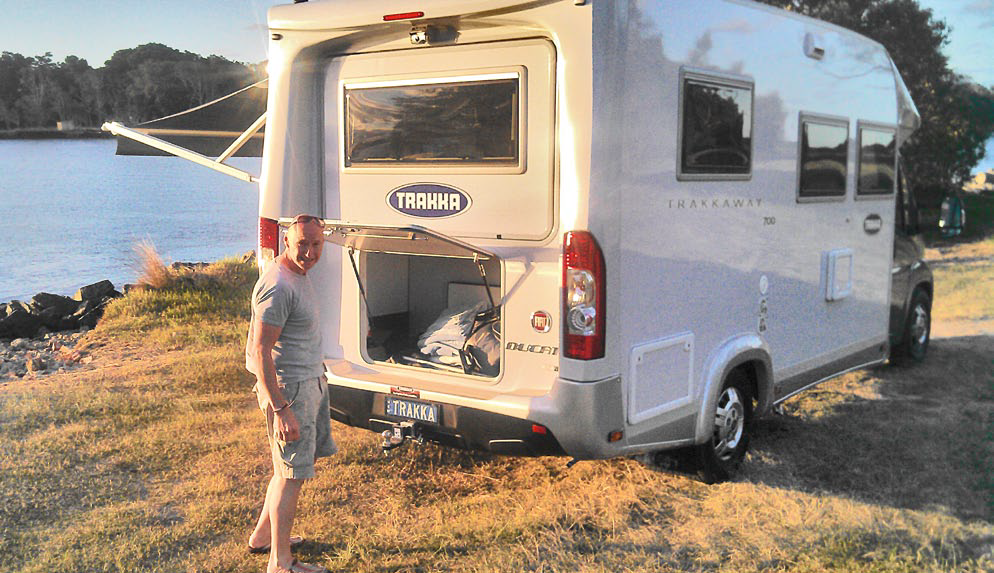 So we thought Mark was the perfect man to ‘road test’ the Webasto diesel cooker in the Trakkaway 700. In only a few days on the road Mark created some mouth-watering dishes like Spanish eggs for breakfast; lamb mint burgers for lunch; and an amazing looking sweet Bangalow pork for dinner, just to name three. When the guys got back we asked Mark what he thought.

Tell me how you found the performance of the diesel cooker.

I found it very clean and efficient. I like the fact that you could use it as a grill; really clever. You can put a nonstick, silicon BBQ mat over the top of the cooktop and cook chops, burgers and toast on there. For braising I just simmered all the ingredients in a pot or tray on the element.

I also think it’s only a matter  of time before people get used to it because it’s  relatively new. Chefs are of a mindset that they just love gas. But it’s a bit like induction cooking. When that first came in no one wanted to know about it. But now people understand it they all rave about it. I think diesel cooktops will be the same. I used it with an open mind and thought it was great.

In fact, I felt it was better than an electric stove. With the diesel stove, when you set it at the heat, it kept the heat.

Whereas, with electric if you set it at a particular heat it comes in and goes out. You can see with the cooktop the red glow coming and going on the element. I didn’t find that happening with the diesel stove in the motorhome at all; very impressive.

I also found the lack of smell inside the van a great thing when you turn on the diesel. Sometimes with gas you get that smell in a controlled environment. The fact that you didn’t have to take gas bottles, keep them topped up or have to worry about whether they’re turned on was great. And also, it’s very safe.

Remember, I’d never used a diesel cooktop like this before so for a five day trip it was a great introduction. If you told me we were heading off around Australia and this is all we had to cook on, I’d think ‘great, let’s go’. It wouldn’t worry me at all. It’s like anything; you learn how it works and get on with it.

So tell me about these BBQ mats.

You get them from the camping shops. They are just a non-stick silicon mat. We use them in the cooking classes at  Food Stuff. If you are cooking prawns we know they leave an odour or residue. The beauty of the mat is that you don’t have to go to the trouble of cleaning the surface thoroughly before cooking something else like steak, or bacon, or whatever. With the silicon mats you simply take it off and put on a clean one or one you use specifically for meat.

Do you have any advice for people using a diesel cooktop?

Yeah, choose the right dishes to cook on it. I mean, in a normal kitchen you don’t make toast in a frying pan. You use the grill. So you have to think about what you’re going to cook. It’s unique because it’s flat. It’s very adaptable. The most amazing thing about it is that you can actually fry, poach, boil, BBQ, and grill on it, which you can’t do on gas unless you have different accessories to go on there. I found the fact that you could cook directly onto it was brilliant. 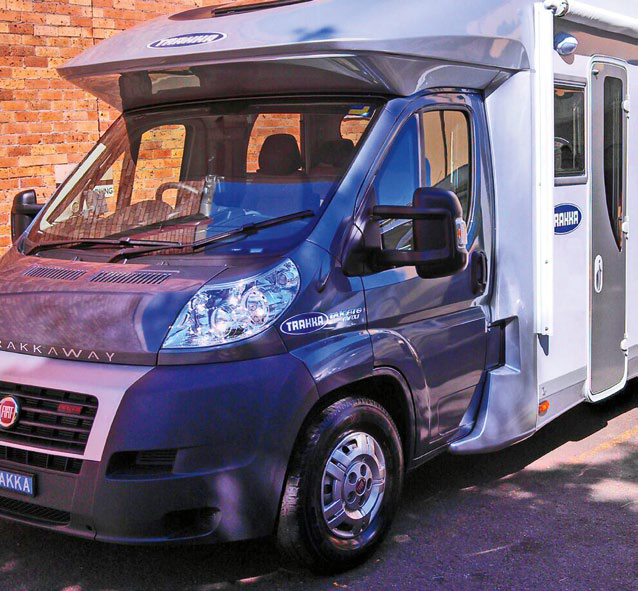 The kitchen was great. In fact, the whole van was fantastic. I mean, caravans are ok and camping’s good but there are always certain preparations. But with  the motorhome, you rock up on the side of the road or wherever you want to stay the night and within five minutes you’ve got the awning down, the table and chairs out, the bed out, and the kitchen’s ready to go. We just found it all great.

I was also amazed at the storage. Plenty; more than enough! I thought we would struggle to find room for everything but everywhere you looked there was somewhere to hide things. 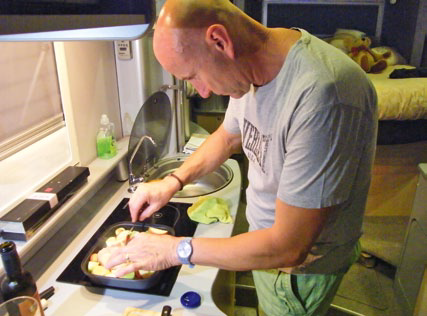 So are you hooked on motorhomes?

It was very enjoyable. It’s a really nice vehicle to use. The whole thing about it - the comfort was unbelievable. I slept better in that bed than I do in my own bed.

We had so much interest in the Trakka. We passed so many campervans on the road. We were pulling up at different places, Byron Bay, Port Macquarie, and there were heaps of other campers but it was our Trakkaway that attracted the attention.

We arranged to meet some friends who had a camper-trailer and we both pulled up together at the site. Within five minutes we were sitting on the deck chairs under the awning, looking out at the sun setting, with a gin and tonic, and our friends spent the next 40 minutes setting their thing up.

We were already partying! We just loved it. 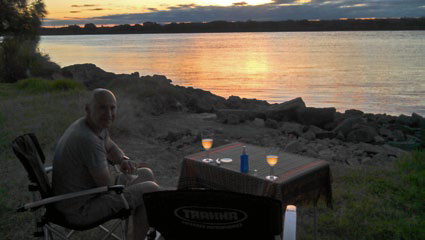