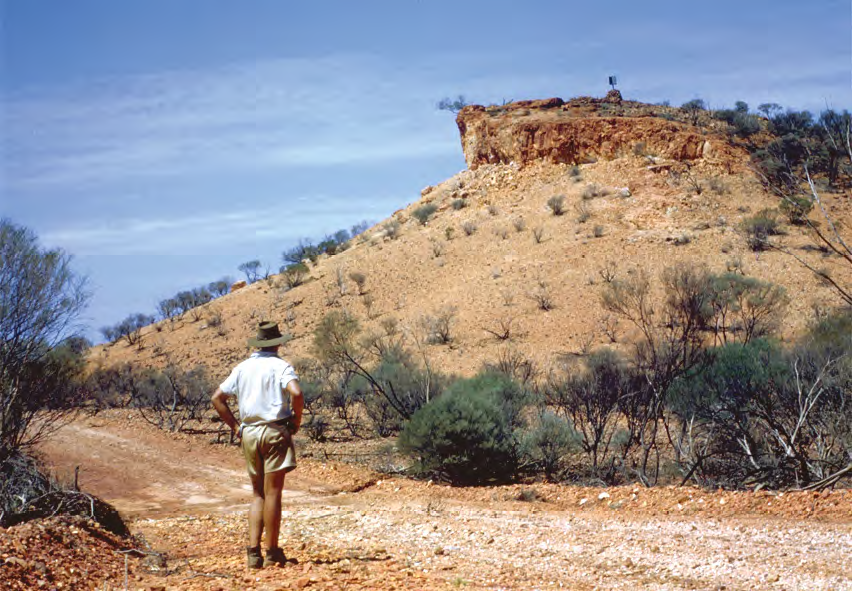 Len stands before Mt Beadell, named in his honour, on the Gunbarrel Highway

Len Beadell was a larger than life character, in fact it has been said that the vastness of the Australian outback was the only place big enough for Len’s huge personality. the confines of a regular workaday routine were not for him; he would have gone stir crazy and that’s something that would have cruelled a life that became devoted to the bush. A love affair that Len Beadell considered a privilege. 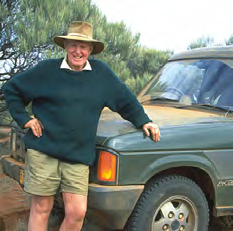 A positive, cheerful and commanding character, Len was born at Pennant Hills West – north of Sydney – on April 21, 1923 to parents Fred and Viola. A year after Len was born the Beadell family began moving through a succession of Sydney homes before they settled in the inner western Sydney suburb of Burwood.

This single decision was fortuitous, as it set in motion a series of events that would shape history. Len attended Burwood Public School where a new school mate called Jimmy Owens invited Len along to his scout group ushering an introduction to the pack’s scoutmaster, John Richmond.

Richmond’s day job was that of surveyor with the Sydney Water Board and surveying was something of a passion for a man that obviously loved the outdoors as much as Len would come to do. Richmond lived in a tent in his own backyard, which was probably an originally amusing arrangement that would have appealed to Len’s sense of fun. In any event, it wasn’t long before the young Beadell had become enamoured with the surveying craft. The scouts became assistants to Richmond’s weekend project that was to establish a trigonometric network for the proposed pipe link between Sydney’s dams – a future water board development. This took place over the course of 10 years as the boys accompanied the surveyor all over the greater Blue Mountains region.

However, it was Richmond’s work with astronomical observations, which Len really took to. He became fascinated with ‘star fixes’ that involved working out one’s position from markers in the heavens – and Richmond imparted all his knowledge about this and the use of what would become Len’s tool of trade, the theodolite.

It was thanks to Richmond that Len gained temporary employment with the Sydney Water Board upon leaving Sydney Grammar School in 1939, whereupon the master and the apprentice were engaged to make star observations for the Lands Department in northern NSW. It was a two-month assignment as part of military mapping operations. Being paid to do what he enjoyed so much and under familiar expert guidance was beyond Len’s expectations. 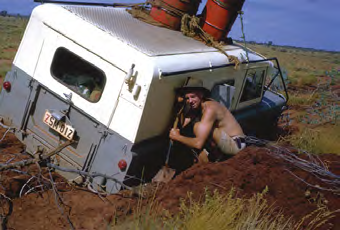 In 1941, Len was called up to the Army Service Corps. The following year he was to be transferred from Bathurst back closer to Burwood for a posting with the 2nd Australian Field Survey Company.

Neither New South Wales’ environment prepared him for his next survey assignment in the tropical climate of New Guinea. Len, along with scores of his fellow soldiers, contracted malaria, but he  was hospitalised following a spider bite that left him with a numb arm. 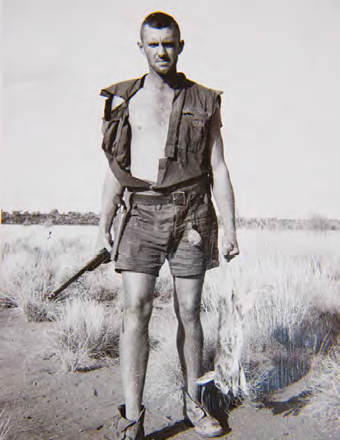 Despite the horrendous conditions Len maintained his positive disposition and his larrikin style and approach. He’d developed a cartooning skill (that would later become an amusing illustrative element to his road-building memoirs) from observing army artists and adhered to his personal values, too; he didn’t drink, smoke or swear. His own take on the army uniform was something to behold, as was his fondness for the hobnail boot (see pic, left). He would continue to wear the hobnail as preferred footwear, without socks, long after his army days were over. Senior ranks would come to overlook the dressing down style he developed more through resignation than anything else. And given that we was to spend so much of his time ‘out of sight’ it hardly seemed important.

At the end of the war, Len was asked to waive his discharge and took a secondment for a survey mission in the Northern Territory with the fledgling CSIRO. This was the beginning of a pattern that would no see official de-mob for a number of years.

Obviously, Len later acknowledged that if he had turned down this offer, he would have left the army and missed the career on which he was about to embark. The road map of Australia would have looked entirely different to what it does today and legendary off-road rites of passage would never have been made by many people. 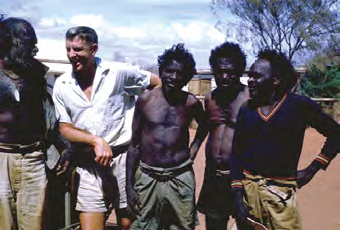 As is often the case, roads are born from military endeavours and subsequently civilians benefit. Len’s ultimately long  relationship with the Weapons Research projects began with the preparation and locations for the British-Australian nuclear tests at Emu and Maralinga and the base for the whole operation at Woomera, in South Australia.

Besides the nuclear detonation test sites, medium to long-range rockets were to be fired (later the Blue Streak rockets) and a range was required that would allow this with no risk of civilian casualty. Known as the Centreline this corridor was a 1600km stretch from the range at Woomera to 80 Mile Beach on WA’s north-west coast.

Len returned to Woomera in 1949 following his official army discharge in December 1948. To facilitate effective military transport movements around the sites of the atomic tests, in 1953 Len was asked to make a reconnaissance mission and based on the findings then construct a track between Mabel Creek and Emu Claypan; this was the beginning of the Anne Beadell Highway.

The remote position of the Emu test site was becoming problematic and so a second site was chosen at Maralinga. It was for this new project that the Gunbarrel Road Construction Party was formed. With only a few changes to its membership this group  of men were responsible for carving more than 6000km of outback thoroughfares amid incredibly tough conditions. With Len plotting a course during sometimes very long solo recce operations, the group would wait for him to return; either camped, attempting to maintain the battered vehicles, re-working road they had already cut or trundling many miles back for supplies to depots that became ever more distant the further the road they were building progressed.

When Len returned, he would guide the direction of the new track signalling back to the bulldozer driver with a mirror the course to take. Once that initial line had been cut the grader would push through to form the road, making other passes as required before, finally, the ‘cherry picker’ would follow along on foot removing rocks and roots that marred the new road’s surface. Imagine that process, in desert heat, on army food, year after year. Len almost died of thirst during one recce for the Gunbarrel Highway; they lost a ration truck to fire; they towed the broken grader with the dozer for 800km for repair all the while enduring Len’s newly-acquired skills as their barber and dentist. There were interactions with Indigenous people that ranged from curious to hilarious as the original inhabitants tried to understand what these new large and noisy machines were all about. 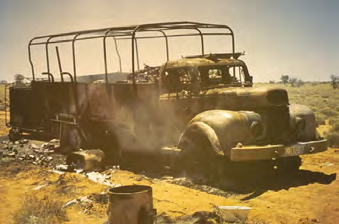 However, occasionally, and often briefly, Len returned to civilisation. He had a house in Salisbury (SA). This house was rented by the Matthews family, newly arrived from the UK in 1960. By July 1961, a young Anne Matthews and Len were married. Three children followed,  Connie-Sue, Jackie and Gary and who, along with Anne all lent their name to Len’s road building projects. Mind you, it wasn’t just their names that ventured into the bush, the Beadell family were ardent travellers and spent many family holidays with a trusty LandCruiser creating new tracks out back. 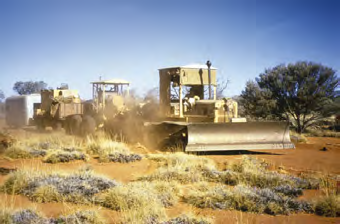 For his endeavours Len received numerous awards and honours, notably the British Empire Medal (1959), the Advance Australia Award (1989) and the Order of Australia Medal (1989).

His exploits, and that of his working mates, are wonderfully recorded in the series of books Len wrote. They are fantastic, and very funny accounts of his work and it’s slightly ironic that it was his failure to record a ‘pass’ mark in English upon leaving school that denied his official registration as a surveyor. Len subsequently studied and achieved the leaving certificate, but never got round to the registration. In 1987 Len was awarded Honorary Fellowship to the Institute of Engineering and Mining Surveyors, which made him proud. 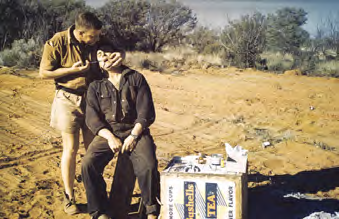 Following an illness and complications from heart surgery in 1993, Len passed away in May 1995. Originally his ashes were placed out by the survey peg of the Centreline before being moved back to the cemetery at Woomera where a memorial now stands.. 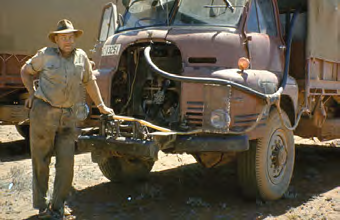 However, the most notable memorial to Len Beadell are the roads that crisscross the Western Deserts and that opened the Australian interior in a way that early explorers Carnegie, Leichhardt and Giles, who’s paths intersect with Len’s roads, could only have imagined.