Australians have a love affair with big motors. That is no doubt due to the fact that traversing this broad country is much easier with a V8 under your belt than a fuel-friendly four cylinder or – heaven forbid – a hybrid.

But times have moved on. And now that the big Falcons and Commodores have mostly been left behind, some people look back with longing at the hulking machines that powered us around the wild Australian landscape.

Motor racing captured the Australian imagination back in the 50s with the Redex Reliability Trials, where all sorts of cars from FJ Holdens, Ford Zephyrs and VW Beetles took on the rugged outback with the help of legends like Gelignite Jack Murray. The route started and ended in Sydney, passing Mt Isa, Tennant Creek, Darwin and Alice Springs on the way.

Motor racing varies quite a lot nowadays. There’s the international gloss and glamour of Australian Grand Prix, the iconic down home earthiness of Bathurst and the eclectic Targa Tour in Tasmania. Some events you can participate in – with the right skills, inclination and  vehicle – but most are for enjoying the race or viewing the historic cars, and relaxing with like-minded enthusiasts. 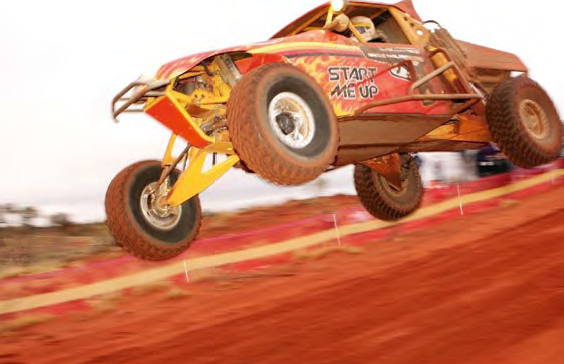 Once you start him up, he’ll never stop. Tourism NT

The home on the hill

Bathurst’s Mount Panorama in New South Wales is often referred to as the symbolic home of Australian motor racing.

Mount Panorama began as a dirt-track/tourist-drive carved out of the bald hills around the bustling city of Bathurst in the mid 1930s. The council of the time, specifically Mayor Martin Griffin, had a vision for a premier motor racing circuit with the sharp hills, hairpin bends and a fast downhill straight that would inspire awe and demand respect from all who took up the challenge for years to come. On Easter 1938 the first races were held, attracting 20,000 spectators who leaned over wire fences to view the action.

Mount Panorama has undergone serious refurbishment since then, and has been home to 46 consecutive Bathurst 1000 races (formerly Bathurst 500). In 2006, 194,000 spectators turned out not only to witness Craig Lowndes edge out Rick Kelly for his second Bathurst title,  but also to farewell one of the best racing car drivers Australia has ever produced – Peter Brock, King of the Mountain.

Another big event at Bathurst is the Bathurst Motor Festival held on March 29 to 31, 2013. There are 55 grid spots up for grabs and the Group N race is all about showcasing some of the classic cars from the history of Australian motorsport.

The talent-packed field includes every driver who finished in the top-10 of this year’s round, including defending winner, Bathurst driver Michael Anderson in his XY GT Falcon.

The north coast also has a few interesting motoring events, including Nambucca Heads’ Hot Rod Rally from Sunday September 22 to Saturday September 28, 2013. Here you can see the most amazing spectacle of classic hot rods and some amazing innovations in creatively  ‘pimping’ beautifully loved and restored motor vehicles. A little further north at Coffs Harbour is the World Rally Championship from September 12 to 15, 2013.

Sydney is also home to the Official V8 Supercar Test, Sydney Motorsport Park on February 16 and the Sydney 500 at Olympic Park from November 29 to December 1.

On an entirely different note is the Automobile Picnic in Leura Mall, part of the Blue Mountains Roaring 20s Festival from February 1 to 24. There is a convoy of vintage cars, motor bikes and historic vehicles, many of which featured in the Underbelly Razor TV series. 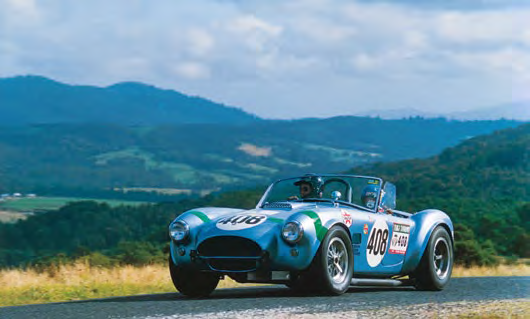 Looking cool with a great view of Tassie. Tourism Tasmania

Formula One is the big international form of motor racing. The high rollers, glamour girls and what used to be known as the ‘Jet Set’ all love to be seen hanging out with stars who hail from every corner of the globe: Australia, Brazil, Britain, Scandinavia, Germany, Spain, Russia and the US to name just some. The signature event for Formula One is the Grand Prix.

There had been many races called the Australian Grand Prix dating back to 1927 near Sydney and 1928 at Phillip Island. The modern Formula One Grand Prix however, started in Adelaide in 1985 as a street circuit race. In that regard, it was similar to the Monaco Grand Prix, though not hoping to impress as much with its locale. Other venues such as Homebush, Surfers Paradise and Singapore also conduct the race on a street circuit.

In 1996 it moved to Melbourne where more than 400,000 people turned up to see the race. It also became the first race of the international season. 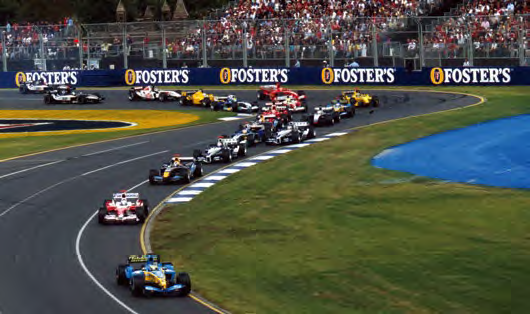 It promises to be exciting as superstars Jenson Button, Sebastian Vettel and Lewis Hamilton will be vying for the lead together with two Australians – Mark Webber and Daniel Ricciardo – on the grid for the first time in F1 history.

There will also be a host of support categories including V8 Supercars, the Porsche Carrera Cup, the Formula Fords, Shannons A&C, the Red Bull Race Off, Ultimate Speed Comparison, Formula SAE cars and Ferraris.

Phillip Island will host the Australian Motorcycle Grand Prix from October 18 to 20, 2013. 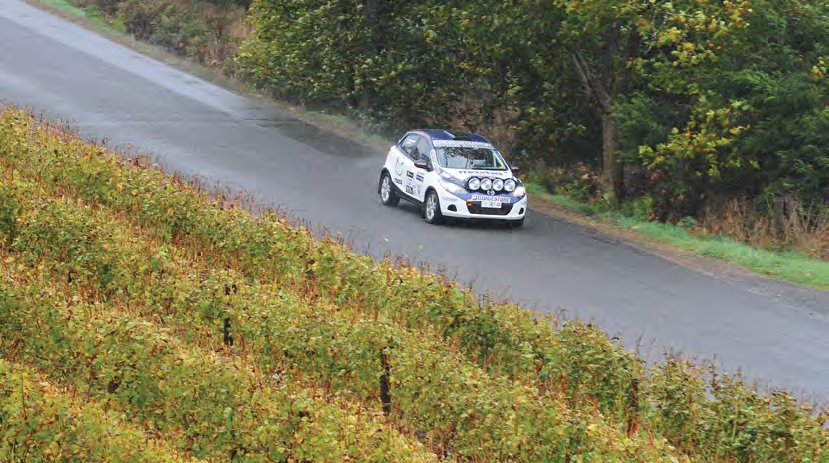 The vineyards make a great backdrop for the Targa Tasmania. Travel Tasmania

Winding back the clock

Tasmania has two motoring events that combine celebrating motor sport with a will to get to the finish line. 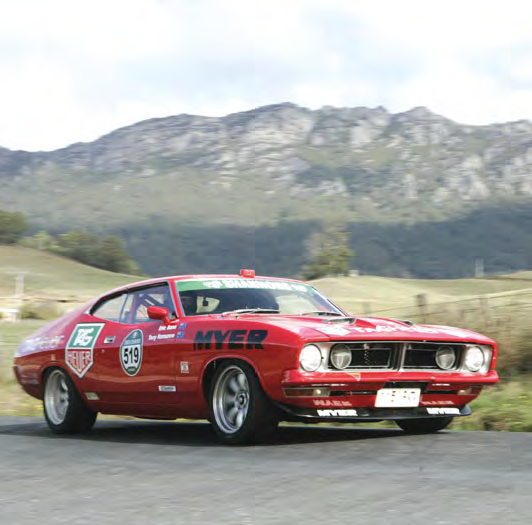 The Targa attracts a variety of car types, even the old Moffat classic. Tourism Tasmania

The Australian Targa Championship is inspired by the Targa Florio, a motoring event held in Siciliy, Italy. Similarly, the  Targa Tasmania is an exciting tarmacbased rally event. It has been held yearly in Tasmania since 1992.

The five day course travels around the entire island of diverse terrain, starting in George Town and ending in Hobart. It is the longest tarmac rally in Australia with no repeated stages, and drivers are challenged with some of the most exciting and difficult tarmac roads in the world. Thousands of spectators flock to view the event each year to witness the exhilarating races from free viewing areas around the course. 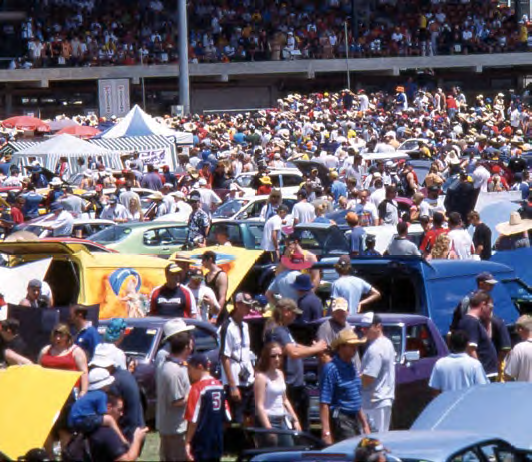 The Longford Revival Festival is a biennial international celebration of the golden era of Tasmania’s motorsport that takes place on 12 hectares of farmland known as The Flying Mile in the suburb of Longford. It’s held to commemorate the car races that took place from 1953 to 1968 in the same town and to  applaud the locals that so successfully made it happen those decades ago. Showcasing the breadth of Tasmania’s offerings, fine food and wine are also a large aspect of the weekend-long festival along with live 1960s tunes, the greatest auto collection ever seen by the state and adrenaline pumping vehicle performances of over 100 national and foreign racing machines. The next event won’t be held until 2014 however (March 22 to 23).

There’s all types of fun – but bear in mind it’s not for the faint-hearted, especially in the evening as the excitement gets too much for some.

You can see a burnout battle, precision driving demonstrations, the traders’ pavilions, airbrush art and a great line up of bands including the Hilltop Hoods (January 4) and Rose Tattoo (January 5) who are celebrating their 37th year as a band. The Summernats Car Festival is held at Exhibition Park in Mitchell, ACT.

The Shannon’s Citycruise down Northbourne Avenue and is one of the main highlights. In 2012, more than 20,000 people lined the avenue to kick off the Nats Chrome Jubilee.

After some careful negotiating with ACT Police and other state bodies, the Citycruise is back in 2013 and is expected to be even bigger, after they’ve managed special permission for louder and wilder machinery to cruise down the avenue. The Citycruise starts Thursday January 3 at noon and runs from Exhibition Park to the City Circle and back. 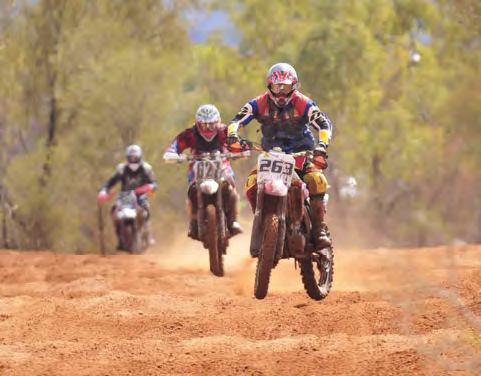 Bikes take on the Finke, too. Tourism NT

The Northern Territory was one of the most dramatic locations for the Redex Reliability Trials, and it still hosts a demanding desert race.

The Finke Desert Race is a truly unique outback event, it is Australia’s premier offroad racing event that attracts bike, car and buggy entries from around Australia and overseas. It is a multi-terrain, two-day race through desert country from Alice Springs to the small Aputula (Finke) Community and is reputed to be one of the most difficult off-road races in one of the most remote places in the world. The Finke, as the event is commonly known, is run along sections of the Old Ghan Railway service track, adjacent to the railway line, along a winding corrugated track, which snakes through typical outback terrain of red dirt, sand, spinifex, mulga and desert oaks. 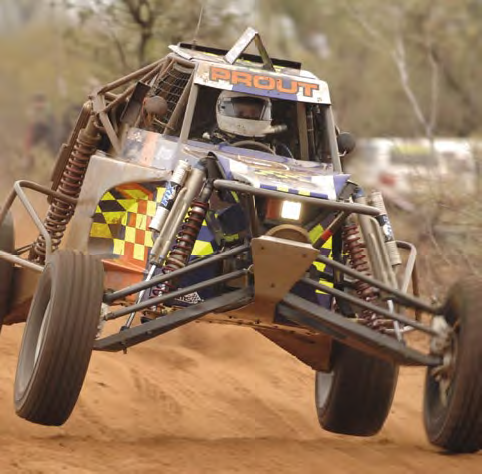 Looking like something out of Mad Max, a hotted up desert buster takes on the Finke Desert Classic. Tourism NT

More than 12,000 people camp beside the racetrack, sleeping under the stars in tents and swags. Tattersalls Finke Desert Race is held on the Queen’s Birthday long weekend, this year on Sunday June 9 and Monday June 10, 2013.

From April 19 to 21, 2013, the Hidden Valley, 10 kilometres from Darwin, hosts  the Australian Superbike Championship (ASBK). This is Australia’s premier motor cycling championship which takes in seven rounds in four states and territories, bringing together Australia’s best riders and leading world class manufacturers.

The Northern Territory has secured its stake in the Championship with riders making the trek north to Hidden Valley for three days of blistering racing in April. The undisputed King of the Valley, Josh Waters, is set to return in an attempt to make it four from four in Darwin, and with an exciting line up of on and off track entertainment in the pipeline.

Then from June 14 to 16, 2013, you can hear the roar of the V8 Supercars descending on the Hidden Valley for the Supercar Championship Series, one of the largest sporting events of the year in Darwin. 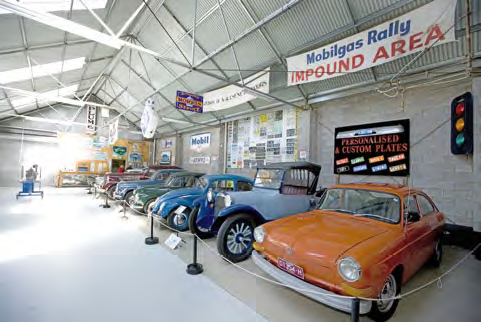 Mums, dads and children urge on these modern juggernauts as they charge bumper to bumper around the tight 2.9 kilometre track that winds between corporate boxes perched on hairpin bends and grassed public viewing areas on straights and corners. Screams and cheers mingle with the throaty high-powered roar that only V8 Supercars can deliver. 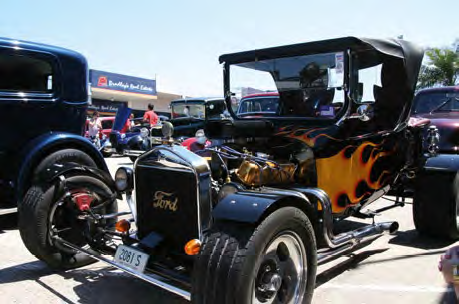 The city of Darwin comes to life over this weekend with Supercar parades and a myriad of social events to complement the on-track racing.