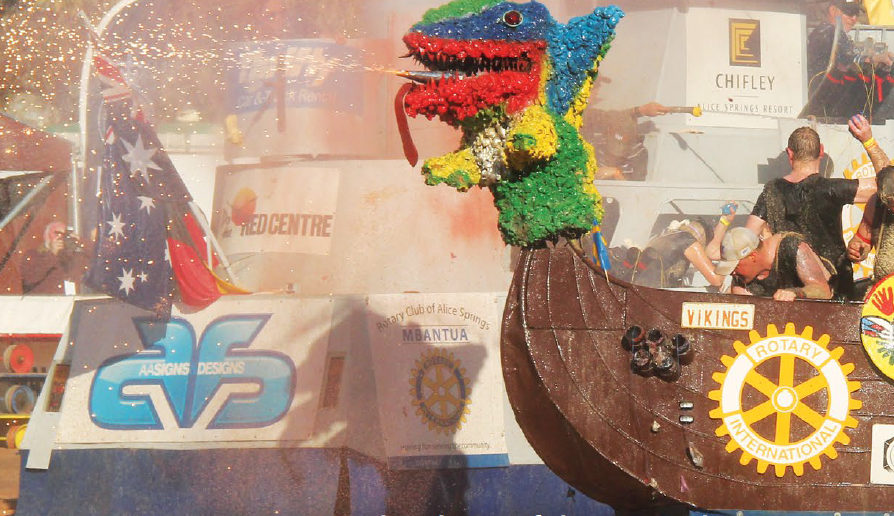 In the words of the Northern Territory’s Chief Minister, “We are a different lot here in the Territory and we embrace the unique and sometimes odd”. How right he is, for where else in the world are you likely to see normally ‘sane’ men, women and children do battle in boats, canoes, rubber duckies and even battle ships in a completely dry riverbed?

Clearly, there must be something in whatever they drink out here that helps the very creative and highly imaginative Central Australian locals set up such an entertaining nautical event without a drop of water in sight… And they’ve been doing it for years.

The 2016 Henley-on-Todd held in the Todd River in Alice Springs, NT, on August 20, was the 55th running of this iconic event, which all concerned believe is getting better and more popular every year.

The day started with a colourful parade of the ‘boats’ through the Todd Mall and then into the dry Todd Riverbed, just a couple of hundred metres from town. With a record number of participants this year (all with a sense of the absurd and a love of the ridiculous!) and an estimated 4000-plus crowd from all states of Australia and a number of overseas visitors to watch the shenanigans take place, this fun-filled day kept everyone totally enthralled throughout. 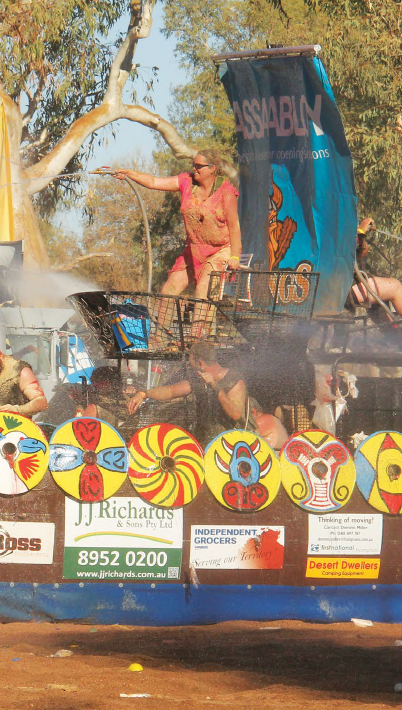 With nautical events running non-stop all day (there wasn’t even a pause for lunch), there was something for everyone. Yes, in this completely waterless regatta, the sight of ‘bottomless boats’ driven by leg power of all shapes and sizes galloping down the sandy river was certainly something to behold.

Included among the raft of, sometimes bizarre, competitive racing events on the program, there were yacht races, dinghy races, surf rescues, a series of anchor-the-boat challenges (tug-of-war), sand skis, bilge cleaning (sand shovelling), Oxford tubs, kayaks, boogie board events, Tour d’Todd (hamster wheels), rowing fours, a Head of the River challenge, kids’ lolly scramble and rubber duckie races, and even a ‘budgie smugglers’ race complete with Tony Abbott face masks – all with plenty of action, sometimes sabotage, many thrills and spills and, above all, great fun! 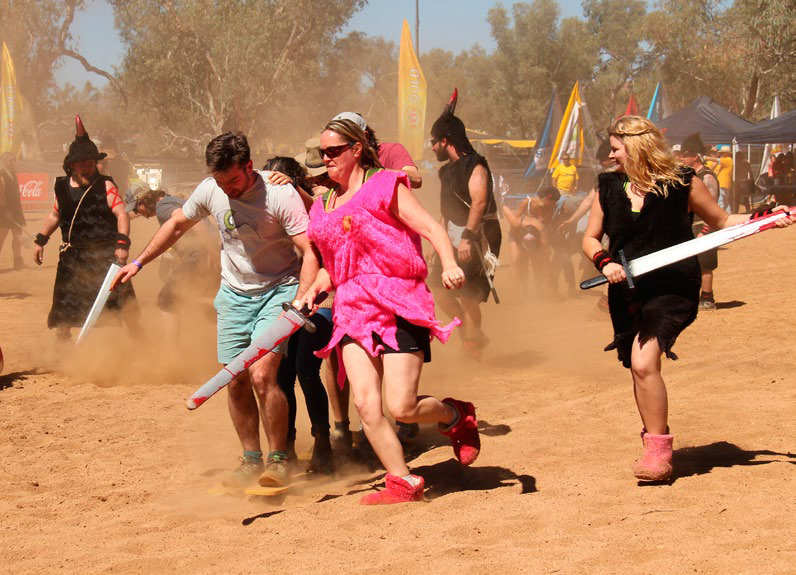 The highlight of this laugh-a-minute program, the grand finale of the day’s regatta, was the ferocious, swashbuckling action of the Battleboat Spectacular. Here, three battleships, built on 4WD vehicles hidden under the superstructures,  were manned by a motley assortment of Vikings, Pirates and Naval Ratings. Each of these vessels represented the three Alice Springs Rotary Clubs, who organised the whole event.

As the hair-raising sea battle began, there were many tricky manoeuvres made by the courageous captains as they firstly tried not to get bogged (resulting in receiving a hammering from the other two ships) and, in the poor visibility, not to run into any of the other vessels and hopefully not wipe out any structures, trees or fences on this ‘high seas’ battlefield. 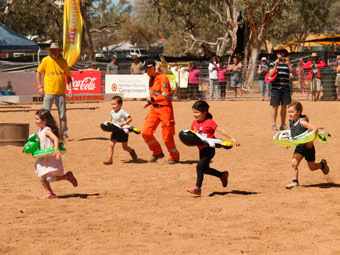 The kids take to the ‘water’

Armed with mortars firing flour bombs, a variety of hand-to-hand weapons and an armoury of high pressure water cannons, each ship manoeuvred around the crazy riverbed battle scene under the cover of dust and coloured smoke bombs, their merciless attacks resulting in absolute chaos and mayhem. This was, indeed, a spectacular finish to a great day.

Ever feel like you’re the hamster? Here, you are!

In the end, the naval vessel HMAS Courage was judged (by the crowd) to have won this battle royal. As well as securing the 2016 Battleship Trophy, the Navy will enjoy having bragging rights for the next 12 months, as both the Pirates and Vikings crews were sent away  battered, bruised and soggy but with smiles on their faces, already preparing a few scurrilous tactics for next year’s encounter. 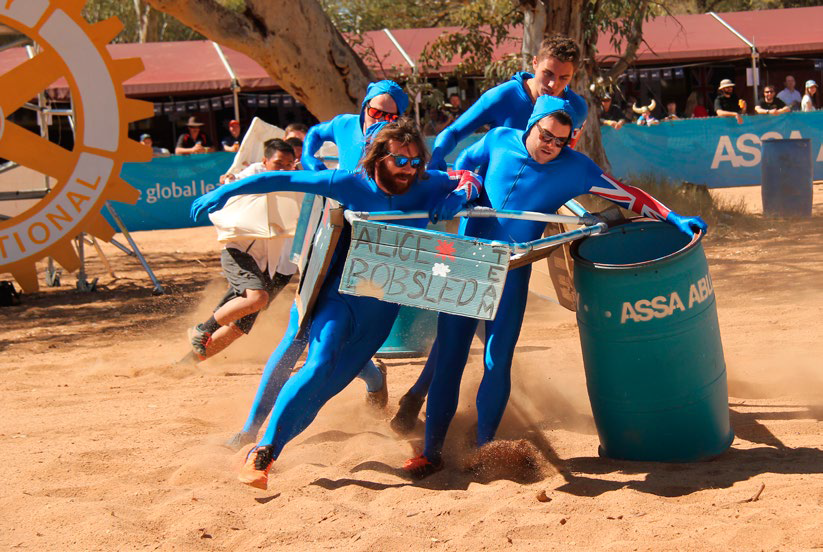 If there’s no water, you certainly won’t get ice – not that it seemed to matter

Also, for the record, during the 55 years this nautical event has been run, no-one has ever drowned and only once was the event cancelled (1993) when there were actually flood waters in the Todd River. Yes, the only boating regatta in the world that was cancelled because of water on the course! 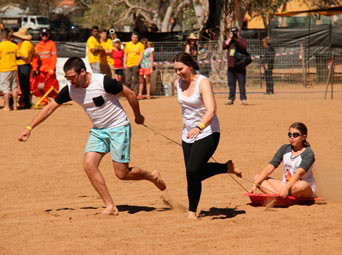 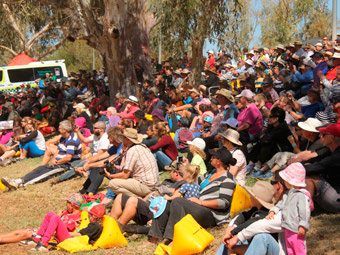 There was no shortage of participants, or of spectators. The best thing was that the event raised a great deal of money for local charities

• The Henley-on-Todd event is held each year in the Central Australian town of Alice Springs. It’s a Rotary of Alice Springs event with a wide range of sponsors and volunteers who help to make it all happen.

• Around $30,000 was raised from the 2016 event, which will be distributed to charity organisations in the community.

• Entry to the event was $20 per adult and $5 per child, or $30 for a family. Plenty of food and refreshments, as well as a wide range of Henley-on-Todd souvenirs were available on the day.

• Held on the third Saturday in August each year, the 2017 Henley-on-Todd is set for Saturday August 19.

*Prices correct at time of printing and are subject to change