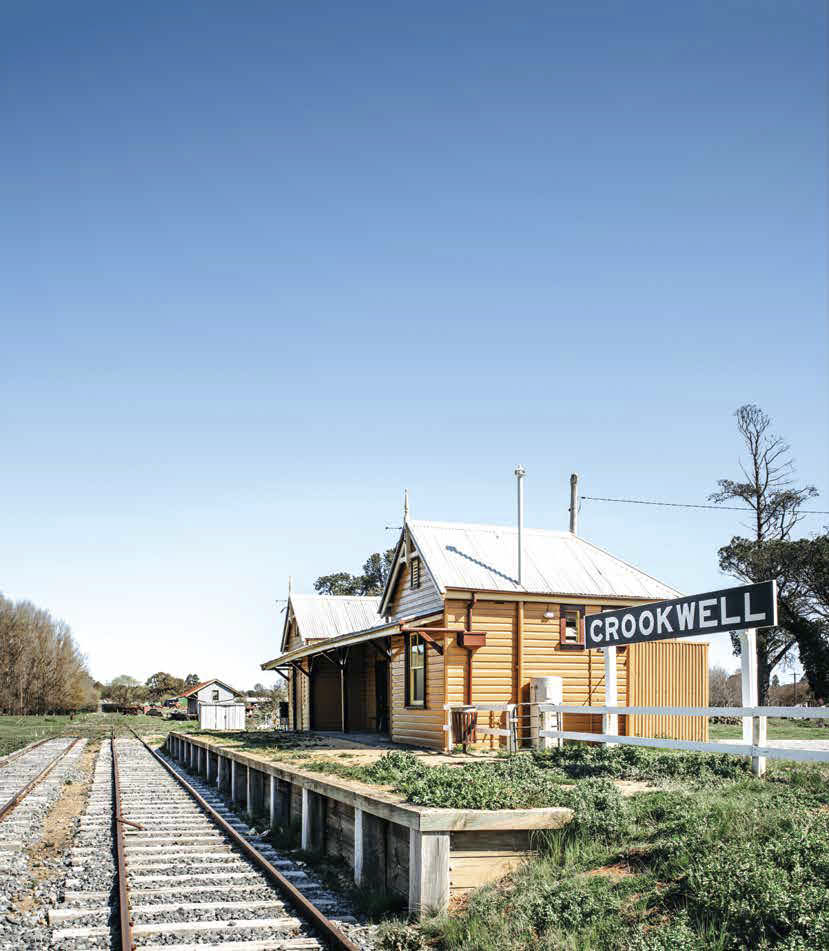 Australia is a nation rich in history; from the world’s longest-living continuous culture in our many Indigenous nations to the complexities brought about by the colonial period, and the gold rush, many transformations in country life illustrate the ways in which Australia’s culture and economy have changed. Here we’ll look at some of the towns and regions where you can feel transported to these times.

The lands now called the Upper Lachlan Shire were first connected by the Wiradjuri, Gundungurra, and Ngunnawal peoples, before European explorers arrived in the early 1800s. With history that includes pioneering exploration, gold, and bushrangers to innovative agriculture, the region has many stories to tell.

The Bushranger Hotel in Collector is a great place to start a historical tour of the Upper Lachlan Shire. Heritage-listed, this hotel was the site of the shooting of Constable Nelson  on 26 January 1865 by bushranger Ben Hall and his gang during a robbery and hostage-taking. Today it is a refurbished pub in 1860s style, offering delicious food and drink in a historic setting.

For a ‘slice of life’ historical experience, visit Pye Cottage Museum in Gunning. This loving re-constructed slab cottage is furnished with period pieces, photos, and agricultural artifacts. Open by arrangement with $5 admission, volunteer members of The Historical Society are happy to tell stories of the past to younger visitors while older visitors explore the exhibits. Contact (02) 4845 1809 in advance to plan a visit. 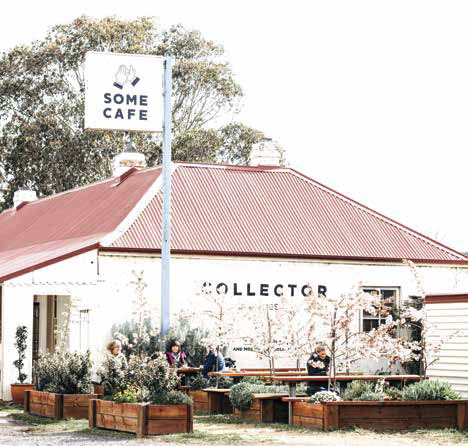 While you’re in Gunning, drop in to the Picture House Gallery and Bookshop located in the historic Art Deco building of the Coronation Theatre. This wonderful art gallery and second-hand bookshop features a collection of original paintings, prints, drawings, sculpture, and ceramics by local and interstate artists for sale.

Stepping much farther back into pre-history, just ten minutes north of Gunning is an unusually fine fossil  rock. Research dates the site at 21 million years old, giving a breathtaking glimpse of the flora of an ancient age.

Farther north, rail history enthusiasts passing through Crookwell should be sure to visit the Heritage-listed Crookwell Rail Station. Built in 1902, the station is now a museum, with unique pedal-powered rail bikes allowing you to explore disused tracks and learn about how rail revolutionised the area.

And just a little way up the road is Taralga, a village steeped in colonial history. The Taralga Historical Society maintains a museum with a colonial-era cottage and slab dairy, as well as a beautiful rose garden where each of the 60 rose bushes were donated by local families in dedication to lost loved ones and to beautify the grounds. The Taralga Historical Museum is open Saturdays, 10am–2pm. Taralga also features the Heritage-listed Christ the King Catholic Church, a great example of Inter-War Romanesque Church construction.

Farther north and west is Tuena, a 60-person community known for wellpreserved wattle and daub cottages that give a glimpse of how the first European settlers in Upper Lachlan Shire lived. The best example of these is Book Keepers Cottage, built in 1861 and used as a place to tally up gold before being transported to its destination by horse-drawn coach and armed escorts. 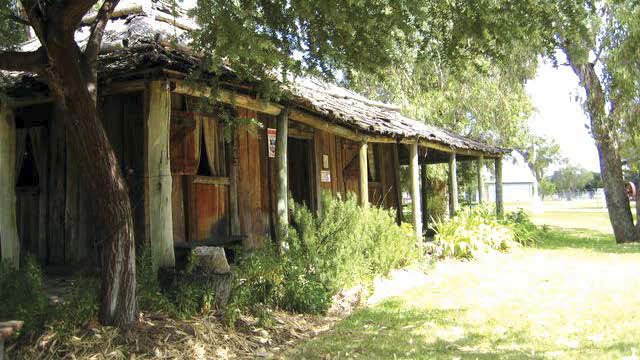 Often called the ‘Sapphire City’ thanks to sapphire mining in the past, Inverell is today a picturesque regional centre steeped in history in the northern tablelands. Well-preserved architecture gives glimpses of the past, while art exhibitions, memorials, monuments and museums will demonstrate that every step in Inverell is walking through our Australian heritage.

The area now known as Inverell Shire stands on land that was once the Gamilaraay Nation, also known as the Kamilaroi people. After Allan Cunningham’s exploratory expedition passed through the region in 1827, white squatters began to take up territory for sheep and cattle stations.

The Goonoowigall Soundtrail is an audio guide which will take you on a walk through Jukembal land, a part of the Kamilaroi nation. This is a living audio portrait of the Aboriginal people who lived there, just outside Inverell, from the 1940s to the 70s. The location was home to many who left their land when farms were being mechanised and broken up, but who chose not to live on governmentrun compounds, sometimes called missions. Goonoowigall was a safe place for families, for the brokenhearted and for those who had nowhere else to go. This site affords  us an intimate living document into what life was like there, and is a powerful testimony to strength and endurance. Inverell Shire’s respect for our shared history continues throughout the region, within and around the town. A self-guided heritage walk, beginning from the Inverell visitor information centre, highlights many of the notable sights. The Inverell Pioneer Village accurately recreates a 19th Century experience, with pioneer buildings relocated or lovingly reconstructed from across the Inverell Shire region. With everything from historical displays to fossicking for blue sapphires, there’s plenty to see. 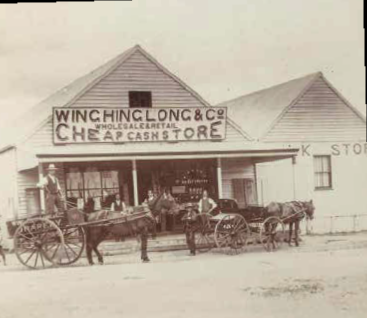 A second self-guided walk, this one a cemetery tour, takes visitors through Inverell’s religious, social,  military, cultural, and architectural history. Similarly, a 5km Second World War Remembrance Riverwalk along the Macintyre River showcases the region’s natural beauty, as well as several Second World War memorials. It also passes near the Kurrajong Memorial, a touching tribute to the ‘Kurrajongs,’ who were the single largest contingent of men to leave a country town to volunteer for the First World War.

In tribute to the sometimes-overlooked diversity of Australia’s colonial past, the Wing Hing Long Museum in Tingha, a 20-minute drive from Inverell, showcases the contributions of Chinese immigrants to rural New South Wales, particularly during the peak of the mining boom from 1880 to 1920. 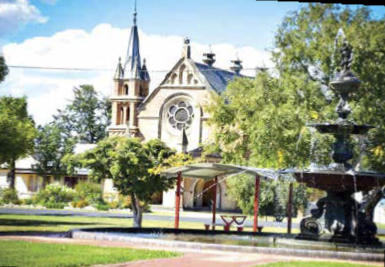 Walgett Shire’s history is long and colourful; from its 100-million-yearold opalised fossils to its significant Aboriginal culture; Walgett literally means ‘Meeting of the Two Rivers’ in the local Gamilaraay language. The town was formed on the banks of the Barwon and Namoi Rivers, an essential element for the Indigenous peoples and later for European settlement.

A great way to discover the unique heritage of Walgett is simply to take a leisurely stroll along the streets. Walgett Shire Council has launched a self-guided trail through the heart of Walgett with subsequent trails to come in Lightning Ridge and Collarenebri, following in the footsteps of those who have contributed to the region’s history. The heritage trail will take you through significant sites from the early European settlement period to the 1900s. Sadly, many of Walgett’s historic buildings have been destroyed by fire, with only glimpses of the original streetscape remaining. Informative signs have been placed on original sites with old photos to help you conjure the rich cultural landscape that defined  the character of the town. Images of the impressive Art Deco Luxury Theatre and the ornate bath house are evocative enough that you can feel yourself walking through history, while other sites still exist. The coolabah tree that hosted the town’s very first church service still stands proud today. There’s no real start or finish to this self-guided trail; just pick up the trail where you like. 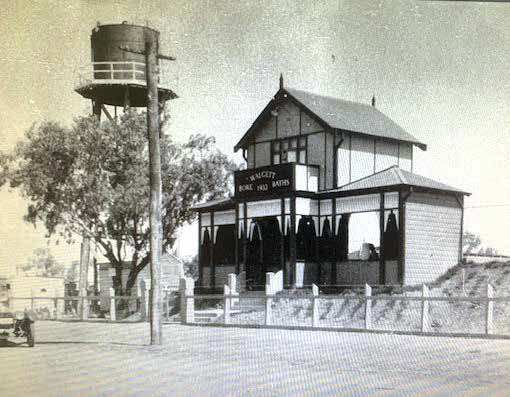 For history lovers the trail is only the tip of the iceberg as Walgett Shire provides diverse historical and cultural experiences, from the water tower painted with folk singing legend Jimmy Little to a hands on experience at the Australian Opal Centre which houses the greatest ever public collection of Australian Opal & opalised fossils. Don’t miss the Goondee, a significant Aboriginal Keeping Place full of traditional musical instruments like the Didgeridoo and essential survivals items like the coolamon. Collarenebri is also home to a beautiful Heritage-listed cemetery and ceremonial site; the Aboriginal community adorn their lost ones’ graves with shattered coloured glass that forms the base of all the graves, flowers and figurines that crowd the whole surface. Collarenebri also houses the carved trees at Collymongle, of great significance to local Indigenous people. These trees were cut down and removed from their original site on Banaway Bora Ground in the early 1940s.

Visit the oldest camp in Lightning Ridge, that of Fred Bodel, a true Ridge character. Fred began mining at Lightning Ridge around 1906 and lived in this camp for over 40 years until he was in his 90s. He passed away in 1973. Other local heritage experiences include the Freedom Rides Soundtrails Audio Tour, Norman Tracker Walford Walgett and the Walgett Historical Society and the Lightning Ridge Heritage Cottage. You can download brochures and find more information at the council’s website, walgett.nsw.gov.au, or pick up a copy of the brochures at the Walgett Visitors Centre in Fox Street, Walgett. 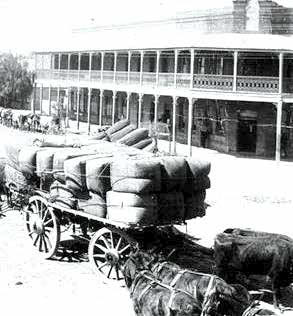 The Imperial Hotel in Walgett

Gunnedah Shire is a great destination with a variety of activities to keep the whole family busy, especially anyone fascinated with Australian history. It’s a region that’s easy to enjoy, easy to navigate, and easy to fall in love with.

Gunnedah itself has many attractions for the history buff, including several important memorials and museums — it is little wonder that this beautiful area inspired Dorothea Mackellar, author of My Country, to write some of her amazing poetry and prose. Along with the historic Town Hall, there is giant public art exhibited on the town silo and the water tower, as well as Aboriginal experiences, including the story of Red Chief, a famous Kamilaroi warrior and leader. The Gunnedah Rural Museum has more than 18,000 exhibits of agricultural and household life throughout local history, and the Water Tower Museum features an impressive collection of historic memorabilia as well as the mural depicting scenes from the Vietnam War, painted by Jenny McCracken. With many historically-significant towns and villages scattered around it in every direction, at the end of breathtakingly beautiful drives, Gunnedah also makes a fantastic home base from which to range out for day trips.

Nearby Breeza was a haunt of infamous bushranger with a gentlemanly charm, Ben Hall, during his youth. A mural stands in the heart of Breeza to commemorate Ben Hall’s final years. The Breeza War Memorial is a granite memorial with marble name plaques, surmounted by the remnants of a machine gun.

Continuing the bushranger theme, Carroll is a small village on the Namoi River, 20km east of Gunnedah, where in 1865, Captain Thunderbolt and two accomplices robbed the inn, then danced and drank for so long that the police arrived. In the shoot-out, the bushrangers wounded a policeman and escaped. 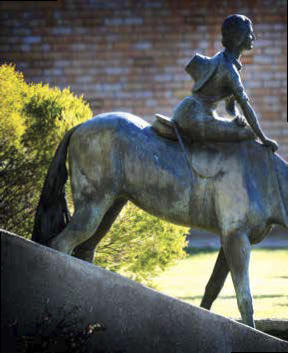 European settlement in what would become Tambar Springs began in 1868, and the village was proclaimed 20 years later in 1888. Tambar claims to have built the earliest First World War memorial, erected in December 1918. Tambar Springs had the largest number of men per capita enlisted in the army in the entire Commonwealth over both world wars. The war memorial has stone columns with marble name plaques and iron gates with arches, and features an obelisk of Italian marble surmounted by a well-executed marble sculpture of a youthful soldier — possibly chosen because the principal benefactor lost a son who was only 17.

Fossils of the largest marsupial ever found were discovered in the area of Tambar in 1979, and are now on display at the Coonabarabran Visitor information Centre. This species of Australian megafauna would have roamed the earth between one million and 20,000 years ago, with this particular specimen being dated approximately 33,500 years old. The Diprotodon is owned by the Australian Museum, but is permanently loaned to Warrumbungle Shire Council.

Statue of a Diprotodon

Boonalla Aboriginal area was previously a state forest and became a protected reserve in 2005. It is managed in partnership with the Gomeroi (also sometimes written as Kamilaroi) Indigenous community. The area is very significant to them, as they have maintained a strong connection with it since the  Dreamtime. The Gomeroi people carry a responsibility to protect and preserve the land and its spirit. Archaeological finds including scarred trees, axe heads, burins, cores, art. and engravings stretching back 4000 years have been found in the area. A visit to the Boonalla Indigenous area is a chance to connect with the world’s longest-surviving continual culture, and with a unique and unbroken spiritual legacy. 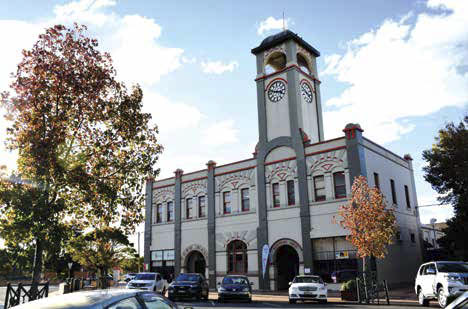 The Town Hall in Gunnedah Shire