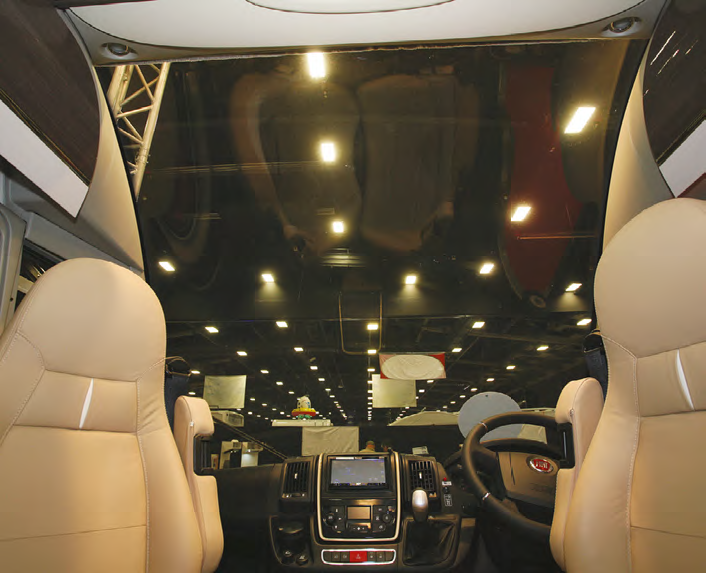 Motorhome layout and design in Australia, and New Zealand for that matter, is a bit unique. This is mainly because designs have been developed for local conditions but also because designers – unless they’ve been to somewhere like the Düsseldorf Caravan Salon – operate in an environment with minimal external influence. (As an aside: if you ever contemplate visiting the Düsseldorf show then please note it takes two or three days to get around.)

Recently, however, in New Zealand there has been a noticeable change and there are signs that importers in tandem with overseas manufacturers are working their way through the minefield of Australian Design Regulations. That is something that we here at KEA are keeping a very close eye on.

So, given that most of us won’t have the opportunity to get to either the Düsseldorf show or its US equivalent, what is new overseas?

One of the more interesting designs we saw in New Zealand last year was a very sporty variant of a large van conversion. Generally speaking van conversions can only come in a limited number of layouts because of the  constraints of the van dimensions and tend to carry the ‘campervan’ label even when quite a sophisticated layout.

However, one British manufacturer has raised the roof, literally, on one model where the existing van roof was removed and an entirely new moulding fitted.

That changed the van profile and the internal height. Additionally, a very different style of windows not seen in Australia before was used and which, in tandem with the roof, gave the word campervan a whole new meaning.

A different variant of that is a coachbuilt motorhome that has been slimmed down (a bit too) much closer to van size but with less restriction than that of the van conversion. Several of these designs have a large lift-up rear door, allowing for large items such as bikes and even small kayaks to be carried.

Another item of interest comes from Europe. In one A class design where the manufacturer has pushed the envelope, it fitted a windscreen that started at dashboard level and curved over to finish above the driver and passenger’s heads. It looked impressive from outside and in, but whether it’s really for Australia is another matter – think stone chips and  hot sun. While that might sound a bit extreme, the use of a large ‘stargazer’ roof hatches seems to be on the increase. It’s not exactly new but A class motorhomes are definitely more prevalent in Europe and North America.

Body construction in Australia tends to follow a couple of patterns: Framed and an external finish of fibreglass/alloy/composite, or a semi monocoque composite body structure. European construction is much more along the frameless monocoque technique, using full fibreglass mouldings and composite panels and we suspect that’s the way it will keep going.

Across the Pacific, motorhome design has taken a somewhat different approach. Unlike the Europeans, one obvious difference for many years was that space was to be created and made available but not necessarily used.

That is changing slowly. Since the Global Financial Crisis (GFC) after which the US RV industry downsized radically, there have been other changes. For instance, there has been a shortening of motorhome lengths. Whereas at one time everyone owned a 36 footer, now sizes of 32ft and 28ft are more common.

This might sound radical but manufacturers are now building more diesel-powered motorhomes. Many of us here in Australia don’t know anything but diesel, of course, but in the US things are very different with petrol engines to the fore. In saying that, Fiat now builds its popular Ducato for the US market – it goes by the interesting name of Ram Promaster. However, instead of just using the tried and trusted 3.0-litre/132kW turbo-diesel, the US version also runs with a 3.6-litre V6 209kW petrol engine.

It will sound like a pun, which it is in a way, but a motorhome released by a major manufacturer in the USA last year was called the Trend. It had a length of 24ft and was built on a Ram Promaster cab-chassis. From the outside it resembled a number of Australian motorhomes, including some from the KEA factory, while the inside having a typical US décor, it had a very British/ European layout. Perhaps that is the trend.