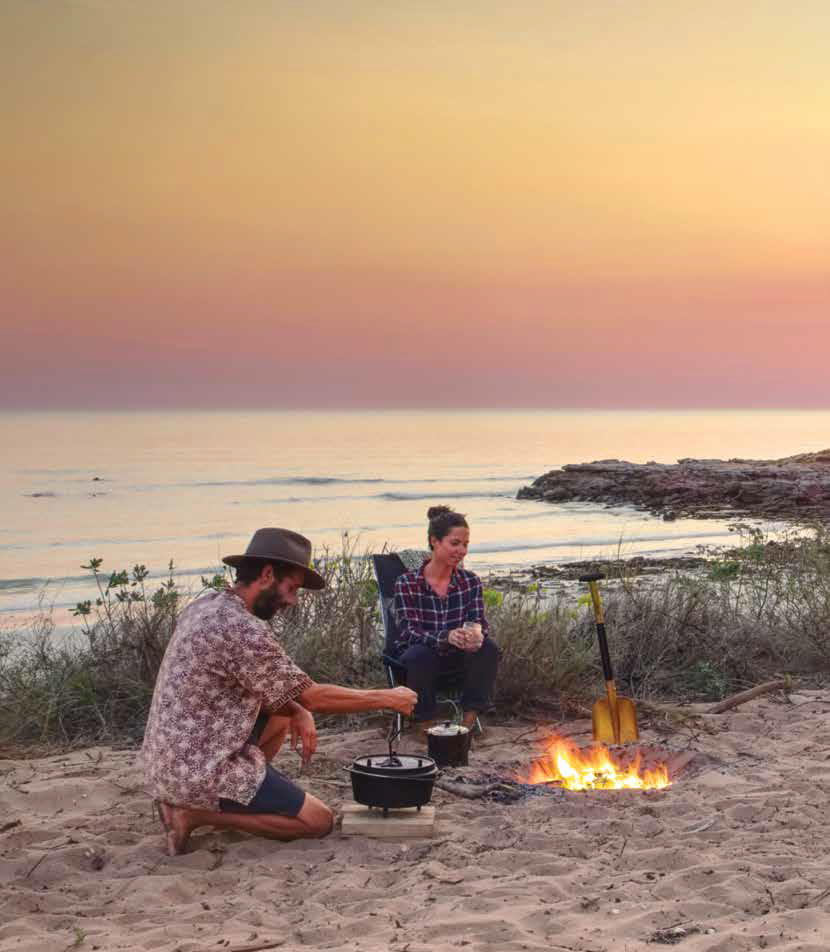 Food is a major cost in most Aussie households and it’s no different when you’re touring. We’ve found that, alongside fuel, food is one of our biggest expenses on the road, and that’s not because we have a penchant for caviar served alongside a bottle of Moët. Food is just expensive, and even more so once you leave the major centres behind. But that doesn’t mean with some smarts and a bit of careful planning, you can’t cut costs in this area.

Saving cash on food starts with your supermarket bill. When you’re stocking up, look for specials and discounts and, if you’re organised and plan ahead, you could even start stockpiling non-perishables as they come on sale, well before you leave.

Buy dry goods you know you’ll use regularly, such as rice and pasta, in bulk. Just keep in mind how much storage space you have available in your rig. There’s no point buying so much food you can’t actually carry it.

When it comes to fresh fruit and veg, buy from local growers where available – you’ll often find you get a good deal, along with the added benefit of supporting the community you’re visiting.

Choose your fresh items wisely. Stick mostly to vegetables that  keep well, such as cabbage, iceberg lettuce, root veggies, and potatoes, and harder fruits that are less likely to bruise.

Trim the fat on your grocery list and keep things simple – basically, save the pricier, non-essential items for special occasions. Savvy campers will know you can be pretty resourceful when pulling together a camp meal, and food tastes better outside anyway. 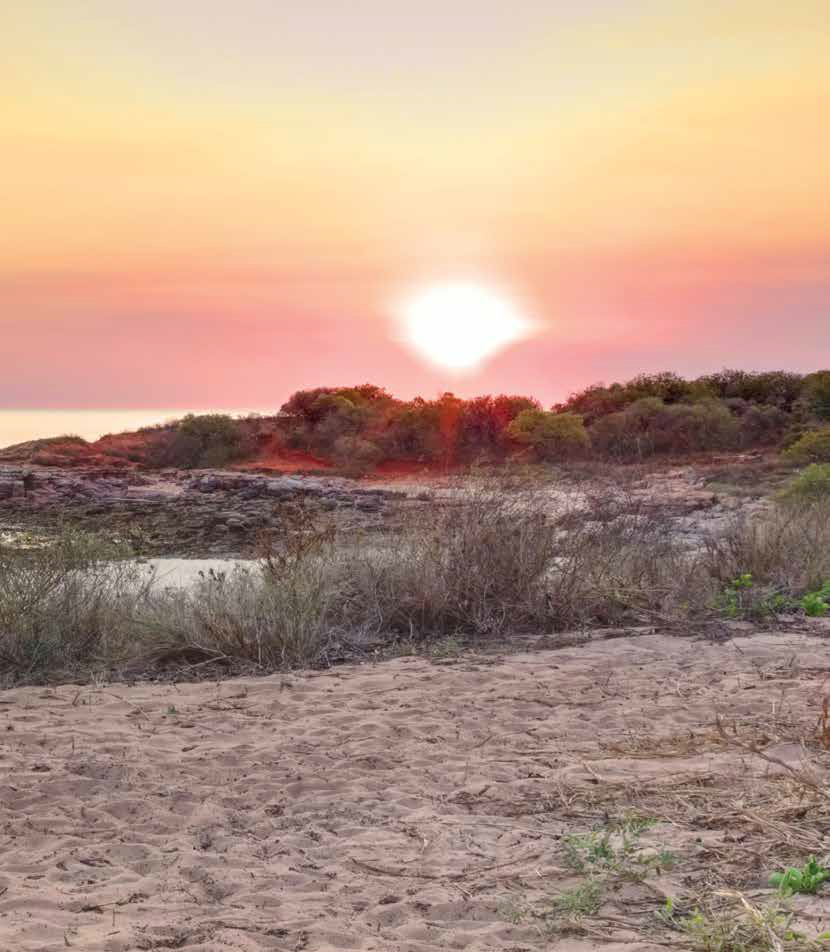 Food tastes better when cooked outside

Make your food stores last longer by cooking meals that will feed your crew for an extra meal or two – think soups, stews, pastas, curries, dahl, risottos, etc. Leftovers can be reinvented when wrapped in a flatbread or thrown between some bread and toasted in a jaffle maker over the fire.

On the flip side, if you’re making things like salads that don’t keep well, make only as much as you’re going to eat in that meal. Basically, get frugal with your food and reduce any waste.

While on the subject of waste, camping is a great time to get creative with perishable items that need using up or are coming to the end of their shelf life. We’ve been known to throw leftover ‘kanga bangas’ into green curry for a tasty Aussie camping twist on a Thai classic, use up leftover veggies on a camp oven pizza, or add a bit of  hot sauce to what’s left of the sour cream for a spicy chilli dip that lends itself perfectly to being loaded onto a carrot stick or cracker. 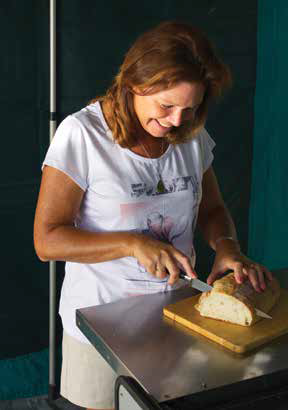 If you’re going to get serious about your budget – depending on how long you’re travelling – you might consider a bit of rationing. For us, living on the road full time means striking a balance between feeling like we’re on holiday, and wanting to eat and drink accordingly (happy hour, anyone?), but also acknowledging that isn’t healthy or sustainable from a budgeting perspective.

Alcohol is pricey, so for long-term travellers and those so inclined, setting a weekly ration can be a simple cost-cutter. Similarly, reducing your meat intake can save a buck or two on the evening meal, while also being good for you and the environment. It also means you don’t have the hassle of ensuring meat is stored appropriately, which frees up precious fridge space.

Another easy win for your hip pocket as well as your health is  to cook your own meals rather than buying takeaways, which end up being more expensive over time and often have far less nutritional benefits. 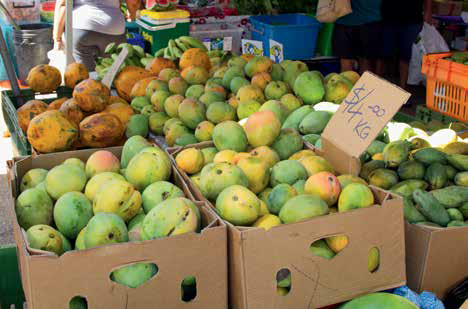 Nature is an excellent provider and there are heaps of delicious treats to be found around you at camp that won’t cost you a cent – if you know where to look!

While you’re probably not going to spend hours grinding up kangaroo grass (Themeda triandra) seeds into flour for your damper, as Indigenous Australians have done  for thousands of years, it’s nice to know it’s there if ever you were in need. Depending on which part of the country you’re in, some of the bush foods you can forage for include Pandanus spiralis seeds (you’ll need to extract the seeds from the woody orange fruit first), bush plums, quandong fruit, boab fruit, wild fig, yams, and green ants (boiled in water to make a lemon-scented bush tea). Just be certain that what you’re collecting is what you think it is before you tuck in.

Then there’s the array of creatures living in our oceans and waterways that make for a  tasty, budget-friendly banquet – anything from mud crabs to freshwater yabbies and prawns, barramundi, squid, and pipis. The fisherfolk among us are sure to be loaded to the hilt with all manner of jigs and lures, poppers and bombers, but even a cheap hand reel and the right bait (serious budgeters can catch small bait fish or hunt for crabs among the rocks) can land you a veritable feast if you’re prepared to give it a shot.

Make sure you know the rules of the state or territory you’re in as some nets and traps are legal in some states or territories and illegal in others. Similarly, while some require fishing licenses, others don’t. Check before you set out and carry a guide to catch and size limits to avoid budget-blowing fines! 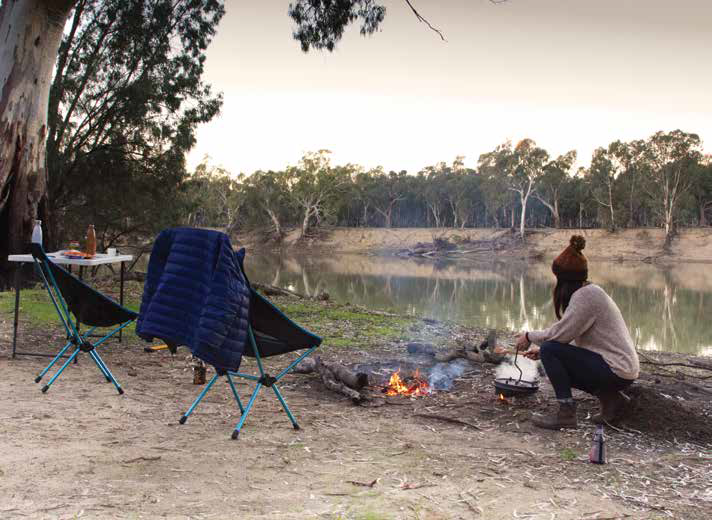 Campers Wendy Freeman and David Howell (below) recommend hitting the op shop when you’re putting together your camping kit to stock up on cutlery, cheap wine glasses, and anything else you might need in your camp kitchen. The benefits are two-fold – you’re guaranteed to grab a bargain and you’re recycling! 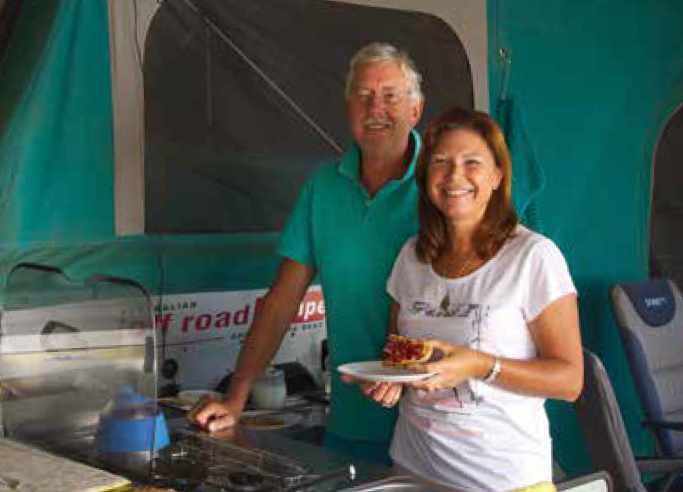 One of our favourite camp meals is an easy throw together veggie curry, which we repurpose for subsequent meals by serving in lettuce leaf cups or wrapped in a roti. Grab some canned lentils or chickpeas, any type of curry paste or powder you have on hand, a can of coconut milk, and whatever veggies you can muster together – we carry dehydrated peas and dried shitake mushrooms to bulk it out when fresh isn’t available. Throw it all in a frypan or camp oven until veggies are cooked through and serve on rice.

Wendy Freeman calls this her fail-safe ‘Pantry Pasta’ and it’s a winner because it’s quick and easy – you can cook up the sauce while the pasta is cooking – and everything comes from the pantry drawer. Cook your pasta of choice in salted boiling water. For the sauce, sauté a diced onion and a can of sliced button mushrooms in oil until soft then stir in a small tub of tomato paste. Add a small carton of long life cream (you can substitute with coconut milk, sour cream or yoghurt, depending on what you have available) and stir through, then add a can of tuna and mix gently. You could also add peas or other green veggies for a bit of colour. Season with salt and pepper and serve over cooked pasta.

It’s an absolute truth that no camp dinner is complete without dessert and this fruity treat is cheap, healthy and easy. Simply core your pear, stuff the centre with a handful of sultanas and sprinkle with cinnamon. Wrap in foil and throw in the coals of your campfire while you eat your dinner. Once the pear is soft, it’s ready to go. Serve with yoghurt, cream or ice cream, and be sure to pour all the sweet, syrupy pear juice over the top. This simple and delicious recipe is courtesy of campers David and Hany Smith.