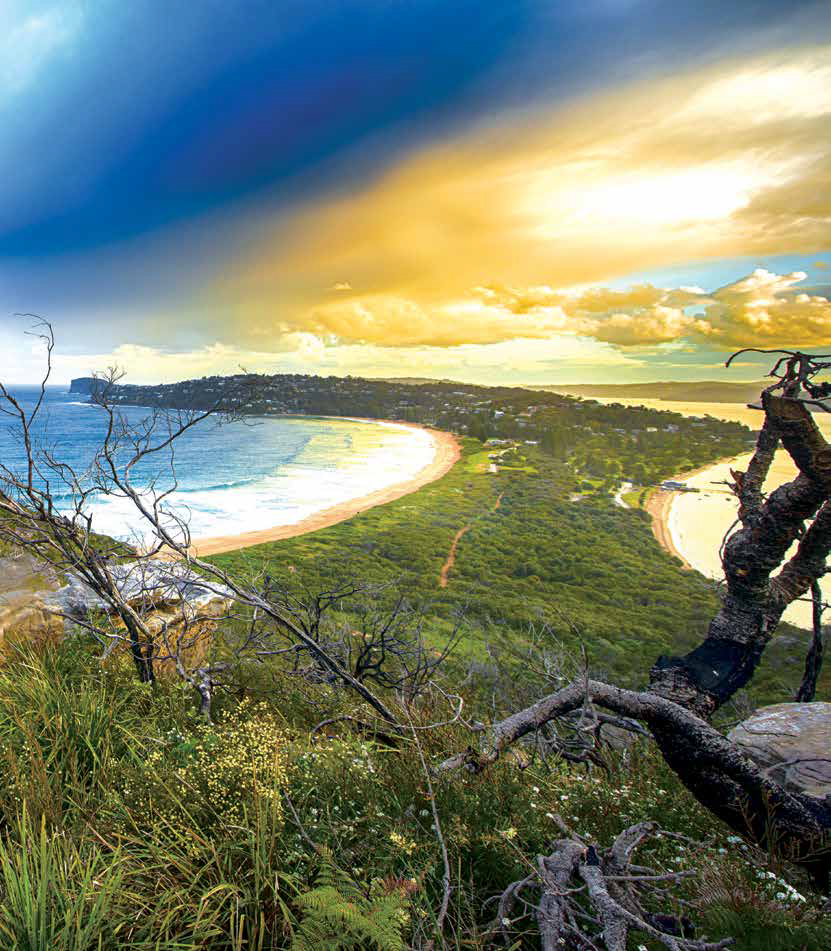 Lighthouses have long evoked poetic notions of isolation, destitution and mental infirmity. The lonely lighthouse keeper has earned his place in pop culture as a tortured soul left to grapple with his own demons atop a windy headland or island, miles from civilisation.

He has only the voices in his head and the murmurs of the sea to keep him company, and after a while he can no longer distinguish the two. The reality is probably not quite so Gothic; lighthouse keepers usually shared the post with their families and often had support staff living there, too. But the lifestyle was still a uniquely isolated one, not to mention dangerous.

By virtue of a lighthouse’s purpose, its residents were often a long way from help if they needed it, and so had to be truly self-sufficient and, to an extent, self-governing. As a child of the ‘90s, I grew up watching Round the  Twist, the cult Aussie television program based on the book of the same title by legendary children’s author, Paul Jennings. The show was based around an historic lighthouse where a widower and his three children lived. Full of tales of ghosts, magic and strange happenings, Round the Twist scared the daylights out of me as a spindly youngster with a vivid and at times uncontrollable imagination. I think it was supposed to be a comedy, but that was lost on me.

It’s little wonder, then, that to this day I find lighthouses eerily fascinating. From their often perilous construction on remote, far-flung headlands to the crushingly lonely existence of their occupants, not to mention the poor souls for whom they failed to guide safely, lying eternally in their watery graves on the rocks far below. And it’s not just my imagination in overdrive, either. A great many historic Australian lighthouses are loaded with  bleak history, tales of murder, freak accidents, corruption and mysterious disappearances. It’s for this reason that visiting old lighthouses is one of my favourite ways to pack a bit of history and intrigue into an otherwise light-hearted coastal sojourn. Here’s a selection of some of the strangest lighthouses in Australia. 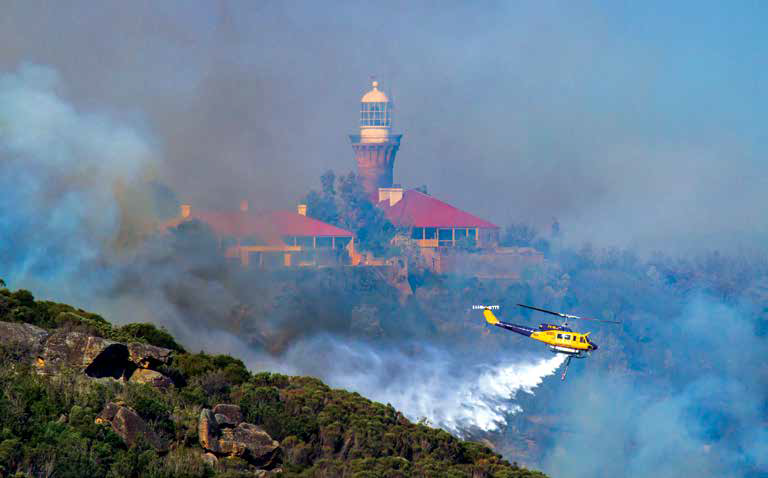 Built in 1868 around 20km north of the town of Seventeen Seventy, Bustard Head Light has an infamously gruesome history. It began with the death of a worker during its construction, but the tragedy was only just beginning. In 1887 the lighthouse keeper’s wife, Kate Gibson, went missing. With their father away, her three teenage daughters commenced a search, eventually finding their mother lying dead in the nearby scrub with her throat slit.

Her death was controversially ruled a suicide. A few years later, Kate’s daughter, Mary, drowned in a sailing accident, along with the assistant lighthouse keeper and his wife. In the decades that followed, the death toll grew. A toddler was scalded to death when a pot of boiling water tipped over her. A love triangle ended in disaster when a nearby property owner was shot and the lighthouse keeper’s daughter was kidnapped, never to be seen again. A few weeks later, her sister died of an epileptic fit. A baby died of ‘constitutional weakness’, and the sea below claimed the lives of countless passengers aboard ships that wrecked on the rocks. Given how few people ever lived at this remote outpost, a great number died. If you believe in bad juju, you’d be convinced this place has it. But if that doesn’t dissuade you, you can visit by 4WD and take a guided tour to check it out for yourself.

An iconic sandstone structure on Sydney’s northernmost headland at Palm Beach, Barrenjoey Lighthouse today offers an idyllic place for Sydneysiders and visitors to hike and picnic. But life wasn’t always so rosy.

George Jnr succeeded his father as head lighthouse keeper after his death, but a few years later was  also struck by lightning, suffering a badly burnt arm and proving that lightning can indeed strike twice. He survived his injuries, but according to reports was wrapped in snakeskin to ‘ward off further celestial visitings’. Shudder.

Evidently, the two strikes were not considered a coincidence. And if you think this tale can’t get weirder, you’re wrong. Several years later, lightning struck tragedy on Barrenjoey a third time when a cottage was hit and burst into flames, killing the occupant — William Mulhall, George Jnr’s brother.

Why God (or whoever lives up there in the sky) was so hell-bent on smiting the poor Mulhall family, we’ll never know. Barrenjoey Lighthouse has been no stranger to fire over the years, positioned as it is on a wooded headland that today is protected by national parks. In 2013 a major bushfire on the headland threatened the lighthouse, but the tireless work of New South Wales firies managed to save the beautiful historic structure. 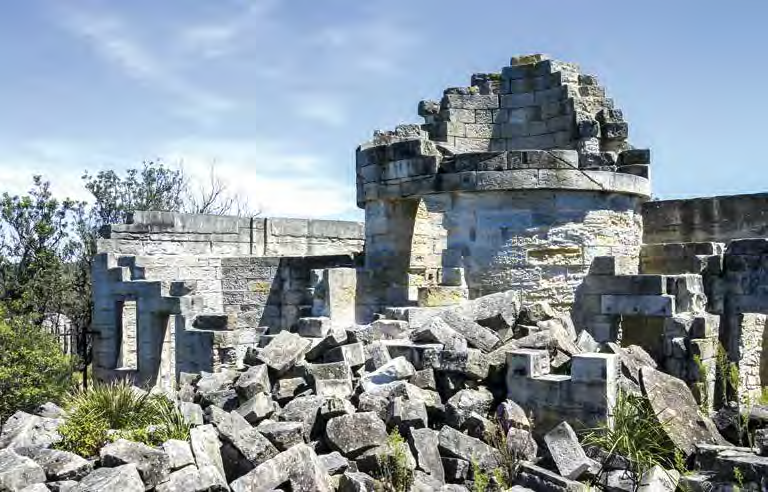 The ruins of Cape St George Lighthouse are a fascinating place to wander and learn about the difficult lives of those who lived there and, for many, their untimely deaths. But Cape St George Lighthouse was doomed before it was even built. In 1856, a recommendation was made for a lighthouse in the vicinity,  £5000 was allocated and a tender accepted. But there was much debate over whether the site would be visible from the north and south.

Despite this, construction commenced in 1860, and it was shortly after found that not only was the lighthouse not visible from the north, it was also constructed 4km north of the intended site as this was closer to the quarry from where the builder obtained this materials. An enquiry later found the board to have been grossly negligent. As a result of the malposition of the lighthouse, 23 ships wrecked in the vicinity  in less than 30 years. In 1889, a replacement lighthouse was constructed in a more appropriate position, and 10-15 years later the tower of the initial lighthouse was destroyed to avoid confusion in daylight.

But it wasn’t just corruption and negligence that plagued Cape St George Lighthouse, tragedy was thought to be its greatest curse. Three children died of illness between 1867 and 1885. In 1895, the assistant lighthouse keeper was swept away in big surf while fishing for sharks off the rocks. He was entangled in his lines and taken by  sharks – while his son watched in horror. A 9-year-old boy tumbled off the cliff and fell to his death. An assistant lighthouse keeper was kicked by a horse and died en route to hospital.

But perhaps most disturbing of all, in 1887 the lighthouse keeper’s daughter, Kate Gibson, tripped while playing with a loaded gun and killed her friend, Harriet Parker, the daughter of the assistant lighthouse keeper. In researching this story I assumed there were crossed wires between Cape St George Lighthouse and Bustard Head Light given the existence of a Kate Gibson in both stories, but sure enough, in 1887 two different Kate Gibsons met with horrific tragedy at different lighthouses in different states. Have you ever, ever felt like this? Spooky... 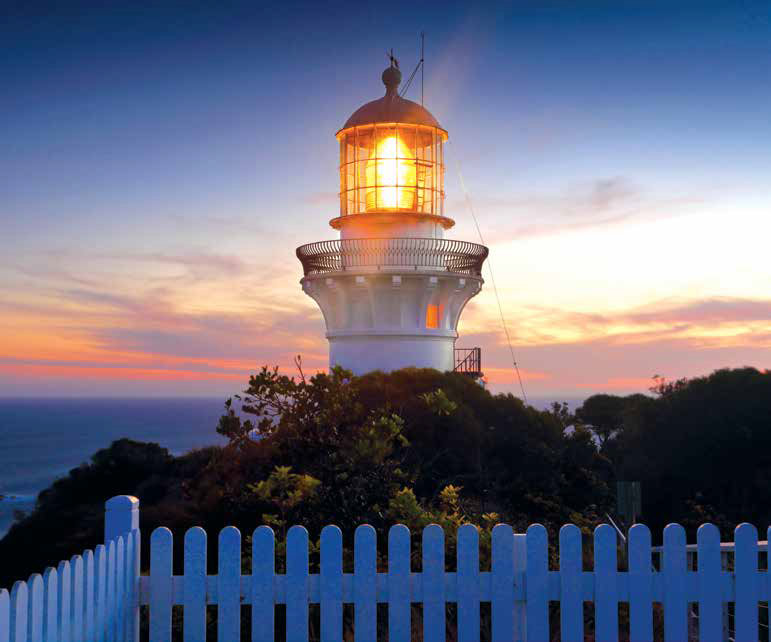 If this red-capped lighthouse looks familiar, that’s because it was the star of the TV show this article took its inspiration from, Round the Twist. The show centres around three children and their widowed father, who become involved in  strange happenings after moving into the lighthouse in the fictional town of Port Niranda. Split Point Lighthouse also featured in a detective novel by author Arthur Upfield as the scene of a murder, and again in the 2003 horror film, Darkness Falls, about a ghost who terrorises a seaside village. What was it that I was saying about lighthouses evoking a sense of foreboding...? Split Point Lighthouse is located along Victoria’s Great Ocean Road, and is open to guests with guided tours available.

This unassuming little island off the coast of Albany in Southern Western Australia became famous at the start of World War I, thanks to the 15-year-old lighthouse keeper’s daughter, Fay-Catherine Howe. As ANZAC troops waited aboard ships off the coast of Albany bound for the front lines in Europe and Egypt – from which many would never return — Fay, who was proficient in signal communications, was able to relay messages between the troopships and their families on the mainland.

Soldiers would send messages via morse code and Fay would pass them on to Albany where they were translated to telegram and delivered to families eager for news of their loved ones. The ‘Little Girl of Breaksea Island’, as she became known, was so well-loved by soldiers she would never meet, many sent her postcards and letters from the front line. 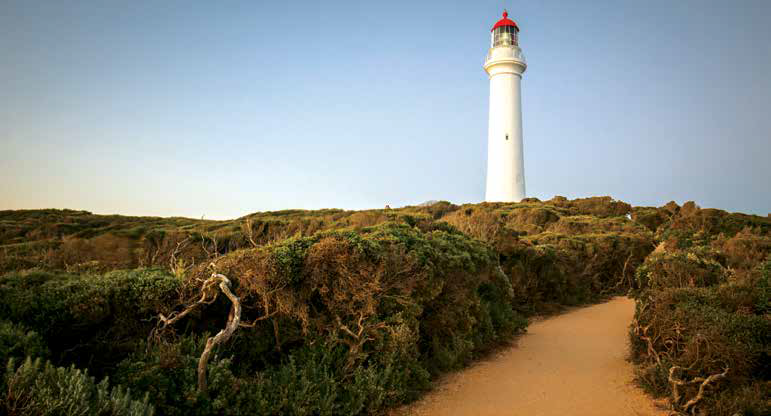 Split Point Lighthouse from Round the Twist

Point Hicks has long been shrouded in mystery. The trouble started with its location, the coordinates of which were incorrectly recorded by Captain Cook after Point Hicks served as his first glimpse of mainland Australia. The location was known as Cape Everard until the 1970s, when the error was discovered by an astute group of Melbourne high school students during a school project.

The construction of historic Point Hicks Lighthouse has baffled  people, too. Built in 1887, the lighthouse broke with tradition through its use of materials, namely concrete and cast iron. How those materials were transported to this remote stretch of East Gippsland, and how they were then hoisted high in the building of the lighthouse, which is actually the tallest on mainland Australia, remains a mystery. 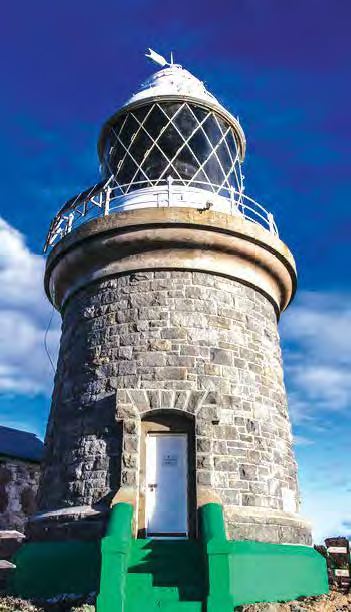 And then we have the longsuffering ghost of poor Robert Christofferson, a former assistant lighthouse keeper who, in 1947, while attending to his cray pots, allegedly slipped off the rocks and was never seen again. Legend has it he haunts the place now, with numerous entries in the visitors’ book outlining spooky tales of footsteps at night, lights that seem to have a mind of their own and a lonely adult figure wandering around down on the rocks. Visitors can stay in one of two historic cottages at the lighthouse, and camping is available nearby. 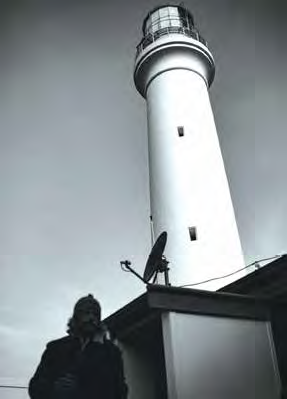