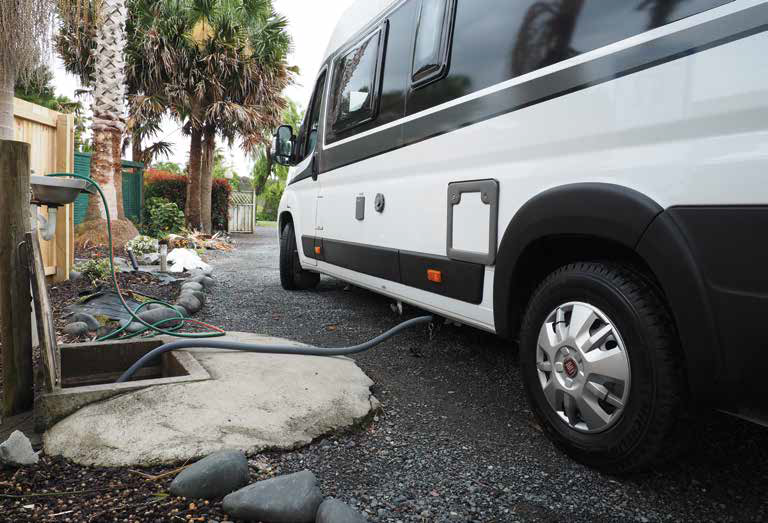 Liquid waste should be disposed of at a dump point

Here’s a very exciting subject: grey water, black water, and, the disposal of the contents of said tanks! It’s something that many of us take for granted but occasionally I am reminded that it’s a slightly mysterious subject for those new to the RV lifestyle.

Just in case you are a newcomer and so that we have our definitions clear, grey water is the drainage from the kitchen sink, bathroom washbasin and shower cubicle whilst black water is a polite way of talking about sewerage waste from the toilet. Also, if you hear the term, self-containment in recreational vehicles (RV), it refers to the ability to retain grey and black water until it can be disposed of in an environmentally friendly way.

One of the more mystifying items even to those who have been in this industry for a long time is that, whilst it was just  about de rigueur for grey water tanks to be fitted to motorhomes and 5th wheelers, it was very unusual in caravans, despite the fact that caravans occupy more than 80 per cent of the RV market. Generally speaking, the attitude was (and still is in many places) that it’s okay to dump grey water just about anywhere that looks like it needs water.

Whilst that is the case in many places, I suspect the grey water issue has become more of a sensitive subject and is the reason that a number of caravan manufacturers have started to fit grey water tanks as standard, particularly in the more expensive caravans. Those include of course, caravans built for offroad use.

Because I visit New Zealand on a fairly regular basis, it’s always interesting to compare the respective RV scenes and apart from the fact that motorhomes (many imported from Europe these days) dominate the market, one of the other differences is that all RVs (caravans included) must be self-contained, that is have a grey water tank fitted. Often the grey water tank has a larger capacity than the fresh water tank. Anyone who has been there will know that NZ is somewhat more environmentally fragile than Australia and the Kiwis are smart enough to retain what they have.

Grey and black water should be disposed of in an appropriate manner and in some cases, the two are treated slightly differently. Unlike New Zealand,  there are any number of places in Australia where grey water can be disposed of by simply draining directly onto the ground upon where the RV is parked. In fact, it is often encouraged just to water the grass!

There are some places, like for instance sport ovals and council showgrounds, where a ‘sock’ of waste rag is required to catch any solids whilst letting the water through but as any good CMCA member would know, there are quite a few locations these days, where grey water should not be drained onto the ground at all.

Black water is a different matter. Many an RV these days come with an in-built toilet in the bathroom. Two manufacturers, Thetford and Dometic, have much of this market and use a 17-19L cassette-style holding tank. Occasionally in the RV market and more common in the marine market is a composting toilet but most RVs, if they don’t have a fitted black tank, used a cassette-style tank which can be removed easily for draining. 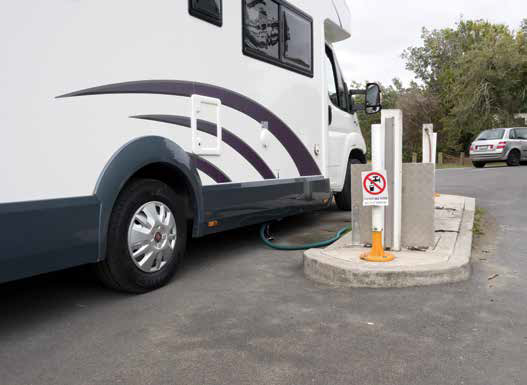 Whatever the tank type, the liquid waste should be disposed of at a dump point, which in the past has been something of a challenge. However, as readers will know, CMCA has been very pro-active in the installation of dump points and now there are more than 480 throughout Australia. These are free for anyone to use of course. Caravan parks that have one are usually for guest use or attract a usage fee if not staying in the park.

I often find it slightly amusing, given the height of some dump points, that the designers of cassette-style black water tanks don’t always understand the end user. Some RVs have quite low grey water drainage valves and there seems to be an assumption that somehow or other, water will flow. Others are fitted into locations that are difficult to get an RV into. Not that there are any books on the subject but dump point etiquette is quite simple – leave it as you would like to find it. 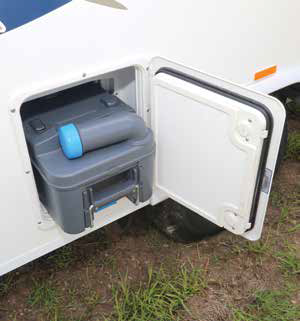 There isn’t much maintenance required on toilet cassette tanks, apart from keeping them clean. However, for those that have rubber seals, they need to be clean and have the occasional spray of silicon lubricant (not petroleum based like Vaseline) to give a good service life.

Grey and black water isn’t exactly dinner time conversation but disposing of it should always be done in an effective way to keep the environment the way we like it! 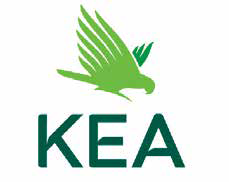