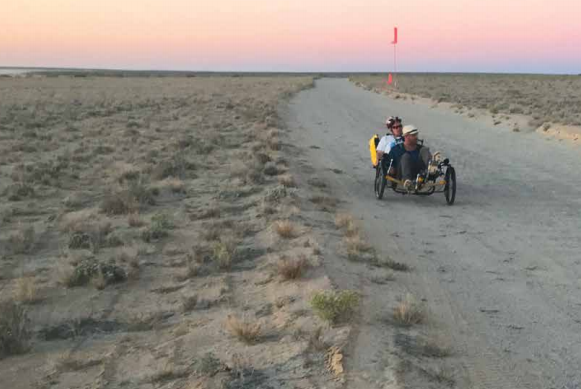 We were attempting something never achieved before. The first journey under human power from Australia’s lowest point, Kati Thanda - Lake Eyre, to the country’s highest summit, Mount Kosciuszko.

For most, cycling over rough terrain through deserts and up mountains for a distance of 2152km would be near impossible. But what made our journey more challenging was the fact that our five members had significant disabilities.

Walter Van Praag has cystic fibrosis and only thirty-eight percent lung function; Duncan Meerding is legally blind; Daniel Kojta has paraplegia and pedals with his hands; Conrad Wansborough lives with chronic pain after a spinal injury, and I have hemiplegia with associated sensory processing issues and am paralysed down one side of my body. However, that wasn’t going to stop us.

One early spring day in 2017 we loaded up our assortment of trikes and bikes on the edge of Melbourne to take the four day journey to arrive at Kati Thada. The drive up was going smoothly until I fell out the back of the troopy. We had the generous support of World Expeditions, who had supplied the troopy and our driver, Ed Homan, who wasted no time driving me to Port Augusta Hospital. I was having trouble breathing and x-rays revealed I had cracked a couple of ribs. The journey’s tagline was “what could possibly go wrong?” But when the troopy hit an underpass with the tandem on top, disaster struck. The frame snapped in three places, and the tandem was the only vehicle Duncan could ride. Together with my ribs, it was looking like the team was already reduced from five to three. Luckily a bush welder mended the tandem, and so we were able to push on. 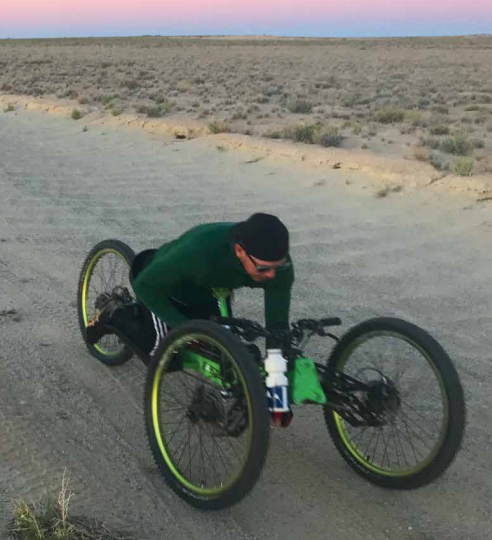 I was supposed to ride the tandem with Duncan, but in great pain was relieved by Conrad for the first two and a half days. Dan was riding his hand-trike and Walter rode a fat bike. The ‘washboard hell’ road made it tough going from the outset, so the team made only 20km the first day. The second day Daniel opted out as his sternum was bruised; the hand-trike requires steering with the chest and the heavily corrugated road was causing him great pain. Walter led the team on his ‘fatty’ and pulled into Moolarina Homestead in the early afternoon. As we suspected, the first leg was proving it might be the crux of the whole ride.

On the third day, we made good progress, but Dan had been suffering with ill health for a few days and the difficult decision to evacuate him was made at Lyndhurst. Ed drove him to Quorn Hospital with a suspected kidney infection, where he would spend the best part of a week. The rest of us continued south to Leigh Creek on baby’s bottom smooth sealed road where we sped along at an average of 27kmph. What a joy after ‘Corrugation Street’. We talked to 40 kids in the school there, and challenged their notions surrounding disability. We are not poor victims in need of help, as many adults see us, nor are we heroes succeeding against overwhelming odds. We are just people, ordinary people, working with what we’ve got, as we all do. But there was a lot of excitement and laughter when we asked the students to play a disability simulation game: open a Mars Bar with one hand behind their back and without using their teeth.

As we were climbing a particularly rough hill up to Blinman in the Flinders Ranges, the back wheel on the tandem seized and we had to order a new one which could only be posted to Broken Hill, about 10 days away, so we resorted to cannibalising Conrad’s trike for the back wheel. From now on he would ride Walter’s emergency bike. Conrad was proving his worth at fixing bikes, and from that moment on became the expedition mechanic. In the Flinders Ranges, Dan returned, and it was good to see him back to his old self. From here the team would head out east on the most remote leg of the journey, being accommodated in shearing sheds. We hit the Barrier Highway at Yunta and had to do battle with road trains and kangaroo carcasses for three days. 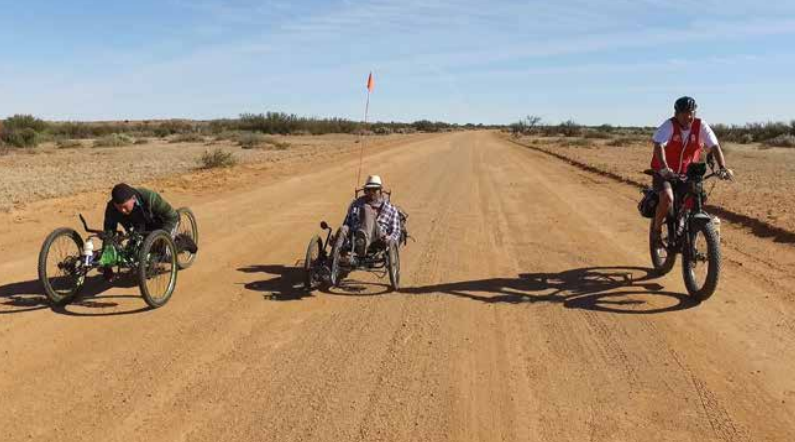 ON THE HOME STRETCH

From Broken Hill we rode the delightful Silver City Highway from barren desert to the lush Murray Riverina, and at Wentworth my friend Vonner Keller joined the team as medic.

We would follow the Murray River for 1000km up until Tom Groggin on the Alpine Way. Speeding motorists made this the most hazardous part of our journey. We found ourselves taking long detours just to avoid the exceedingly dangerous Murray Valley Highway.

At times the team would split up and take different routes according to their modes of transport. The tandem for instance, was up to four times as fast on sealed roads, while the dirt roads along the river bank were more scenic and ideal for the hybrids. Along this leg of the journey the team was riding more than 100km a day. Upon reaching Albury we took a rest day and continued along Lake Hume. Not far along the lake, with its skeletal trees poking out of the still water, the landscape changed from flat Riverina to alpine foothills.

Once the lake was behind us we had our first view of the mountain, and what a view! Still dressed in its winter coat of snow and seemingly hovering above yellow canola fields, we wondered how the hell we were going to ride up there. Lucky for the skiers, but unlucky for us, it was the best spring snow in Kosciuszko’s recent history. We had to lend the mountain gear we lacked, such as ski poles and snow shoes. Above Khancoban, on the huge hill past the Snowy Mountain Hydro, Dan started feeling unwell again and medic Vonner made the wise decision to evacuate him to Corryong Hospital. Once we had summited the pass came the best descent of our lives, a narrow winding road carving and dropping through many tunnel-like cuttings.

The team reached Geehi Flats. We had cited Tom Groggin as the day’s final destination, knowing that the next day, up the steepest hill in Australia, to Dead Horse Gap, would probably be the toughest of the trip. However we would now have to climb another pass to arrive at Tom Groggin, before two more passes to get to Dead Horse and down to Thredbo. Wally and I were fatigued and we voted to camp at Geehi.

We departed at 7am the next day. The team soon became scattered, with Conrad and Vonner a few kilometres ahead of Duncan and I. Wally, preferring to start later after his morning nebulising session, was fetching up the rear. Ed waited every five kilometres for the group to pass, as after nearly 40 days on the road, we were becoming extremely fatigued. Thredbo was a mere 23km away, though for a man with cystic fibrosis, a hemiplegic, and a blind guy, often travelling at two kilometres per hour, it might have been a world away.

We reached Leather Barrel Creek and after a brief rest set off for Dead Horse Gap. This last pass was of a mildly lesser gradient but still 10km of serious uphill. The first snow was a drift at Siberia, just short of the gap. The tandem team touched it and had a moment to appreciate just how far they had come since the salty surface of Kati Thanda all those weeks ago.

After a day of rest at Thredbo the team headed down Crackenback and into Jindabyne. The next morning we embarked on the last pedalling day of the trip - from Jindabyne to Charlotte Pass. This was another 1200 metre climb. We cycled up into the snow with Matt Newton’s drone a constant companion. The gate at Perisher was opened three hours before we arrived there, thus allowing us to cycle the remaining 12km up to Charlotte Pass. The spring melt was well under way. Nevertheless, there were snow banks by the road side several metres deep, and cornices overhanging the outer bends of swollen silver streams. The whole scene was one of magic.

Charlotte’s actually felt like the end of the trip as the snow would prevent us cycling the last nine kilometres to the summit of Australia. From here, we would have to trek. Lachlan, the resort owner, opened the door to the staff quarters and after dinner, we crashed out and got up at 4am. We decided on an alpine start so that the surface of the snow would be frozen enough to support our weight.

The pools of head torch light revealed a crusty solid surface as we trudged through the darkness. By the time we had reached the Snowy River we were in a wonderland of alpenglow and the dawn had scattered twinkling diamonds on the snow cover. We had given ourselves the turn-around time of noon, but it was barely 8am when we paused at Seaman’s Hut to sip warm sweet tea. We were still walking on top of the crust up until Rawson’s Pass where we saw the tops of bike racks poking farcically out of the snow.

THE REALISATION OF A DREAM

From here we took a traversing path across a snow field. The time was approximately 10.20am when we trickled onto the top of Australia, the TABs (temporarily able bodied) first, then Conrad and I followed by Duncan and Walter. We all got very emotional. The strain of keeping it together for 42 days, and suddenly being freed, was as though a levee had broken. We all shed tears as we sat drinking whisky that Duncan’s grandmother had given us. We toasted ourselves, but more-so Wally who was the only member of the team to ride uninterrupted for 2152km from start to finish. 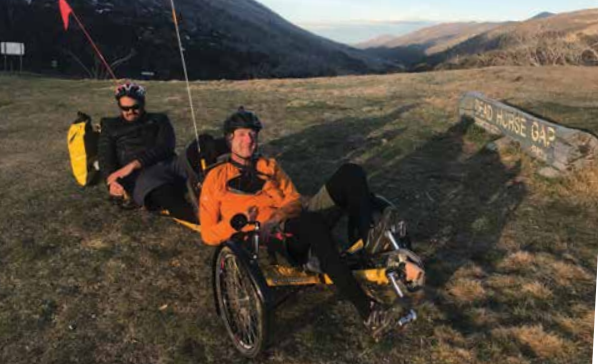 When it came time to descend, the snow had turned to slush in the heat and we all had a difficult time wading through what amounted to a metre of soft serve ice cream. We hit the carpark in the late afternoon and a four-year dream had become a reality.

Not only had we achieved the first journey from the lowest point to the highest point of the Australian continent under human power, but we’d achieved something much more than that. We had proved that people with disabilities are capable of world firsts, not just ‘first disabled challenges’. We have challenged popular notions surrounding disability, and we had proved that anyone, with or without a disability, can achieve their dreams given the right life chances, and by working together. 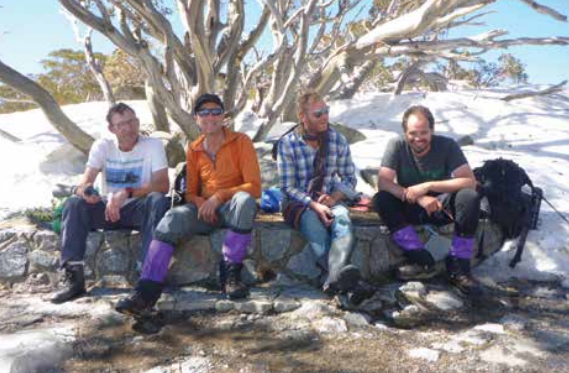 Having a well deserved break after reaching the summit from left Walter, Paul, Conrad and Duncan