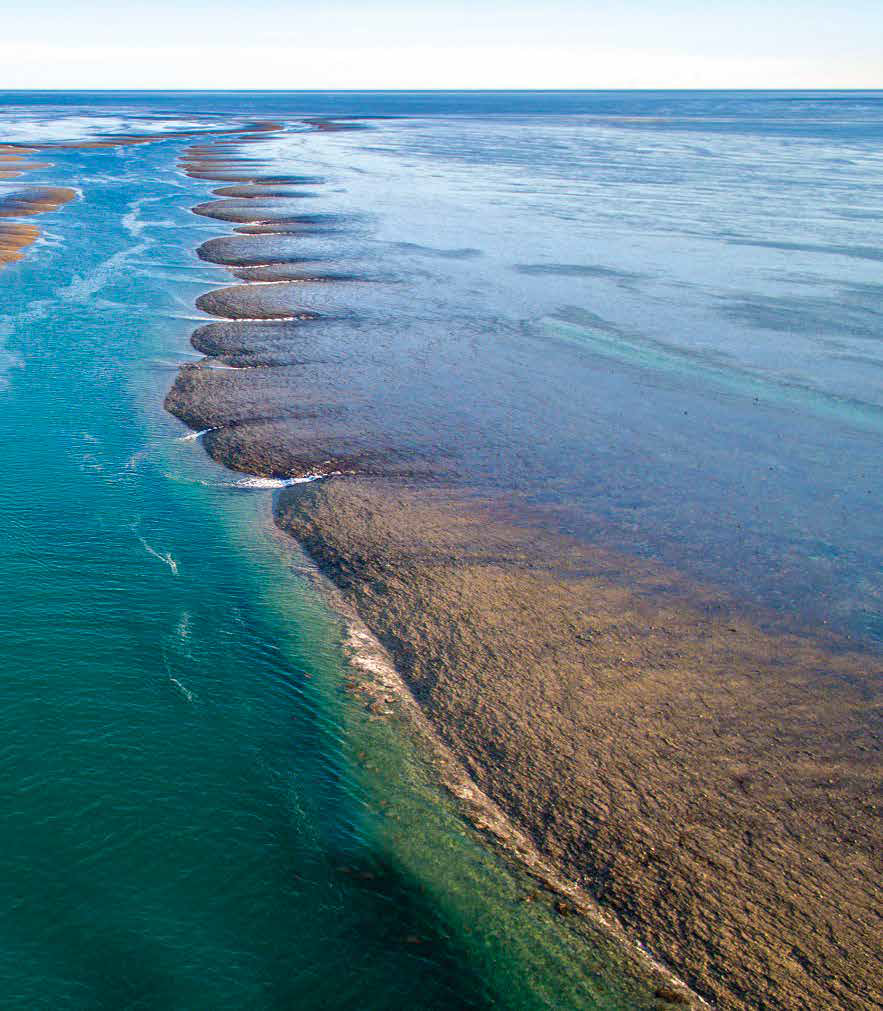 In the north-west of Australia is the remote and fascinating region of the Kimberley. It has a jagged coastline with many inlets that reach deep inland. The tide sweeps into them with amazing speed and ferocity,” chimes the familiar voice of David Attenborough in the 2002 BBC documentary Great Natural Wonders of the World.

“Talbot Bay forms part of one of the larger inlets,” Attenborough continues. “The inland exit of the bay narrows to 20ft at water level,  funnelling the tide as it ebbs and flows. It’s this twice daily event that makes Talbot Bay Australia’s most unusual natural wonder. The surest way in is by seaplane,” he exclaims. “Boats rarely venture here and there are no roads. Few people have ever seen this spectacle.”

In fact, the very seaplane that Attenborough flew over Talbot Bay in belonged to Grant Moffitt, co-owner of tour guide company Kimberley Extreme. “We flew him in there as part of our trip,” says  for their cruises ever-growing, they quickly sold Kimberley Extreme and launched what is now known as Discovery One, a family-owned cruise business taking passengers on 14-day adventures along the Kimberley’s remote and spectacular coastline. Since 2005, Discovery One has been sailing full-time, and this upcoming season will be her fifteenth at sea in the Kimberley. 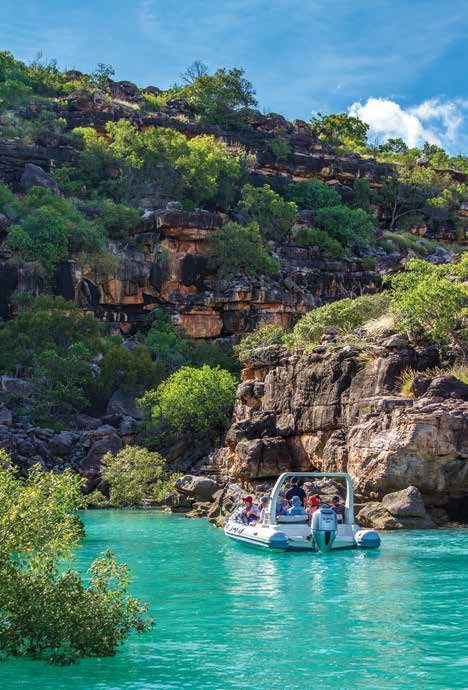 Discovery One, Grant tells me, is like no other boat cruising the Kimberley. She’s small for starters, much smaller than competing boats sailing the region, with space for no more than 22 guests. She’s nimble, with a shallow draft, which means she can get closer than usual to the coastline, and travel up rivers and estuaries which larger boats can’t access. She only travels during the day, so guests can see every inch of their journey first-hand. She sails from Derby to Wyndham, as opposed to from Broome to Darwin, meaning that guests don’t have wasted days negotiating open seas,  or suffering from sea sickness. She also has one of the best panoramic viewing platforms, given her former life as a whale-watching boat.

Most importantly, her itinerary is flexible. She goes where the winds and tides dictate that she goes, and her Captain Lennie is tenacious and knowledgeable enough to take guests to the best spots, whatever the conditions. Captain Lennie, Grant also tells me, is one of the best in the Kimberley, and he’s been at the helm of Discovery One for 12 years.

“Lennie knows the Kimberley. What he does, it’s a pleasure not work and it shows. That’s the difference,” he says. “It’s not that easy to get staff who are compassionate and passionate, and that love the Kimberley. The experience guests get is all the knowledge and experience that our captain Lennie has. There’s nothing like experience.”

“Guests find our itinerary is missing half the information,” Grant continues. “Most of the places we go to aren’t listed on our itinerary,  firstly because we keep it a secret, but also because we can’t say exactly where we’re going to go.”

“I’ll give you an example,” Grant explains. “Last year I went on cruise 13. On day one we went to a cave and it was just absolutely amazing inside. The walls were glistening with gold and sandstone. I said to Lennie, ‘mate, that was just unbelievable’. I said ‘how many times have you come here this year?’. He looked at me and said, ‘Grant, this is the first time I’ve been here’.

Apparently, Lennie tells guests that they could be on the boat for four months and get off the boat four times a day, but he still wouldn’t be able to show them all the places he’d like.

Lennie tells me he was brought up in the Pilbara region, but has fallen in love with the Kimberley since he moved there to work a season as a musterer and mechanic. “Everyday is a highlight up there,” he tells me. I ask him if he loves his job. “Yes, for sure, otherwise I would have given it away. But I love getting  back up there each season, and taking people through and giving them – well what turns out for a lot of them – a holiday of a lifetime.”

“It’s just the remoteness. It’s how it always was. The rugged sandstone cliffs and there’s so much variance in the different things you can see and do, with waterfalls, and reefs. Everyday is different,” he tells me.

Lennie’s knowledge of the Kimberley is all self-taught through reading history books and his relationship with traditional owners in the area. In 2012, Lennie worked with the Worrora tribe, who live in Mowanjum just outside of Derby, helping to train their young members to become rangers and guides for Worrora-owned business Wandjina Tours, set up by tribe elder Donny Woolagoodja. “We spent a season doing all the tours with them so they could train the young guys up to be rangers and tell the dreamtime stories,” he tells me. “That was certainly an honour.”

Lennie even keeps in touch with some of the guests who stay on the boat. Yesterday, he tells me, he  went sailing with a past guest on his yacht. And, some of Discovery One’s passengers have cruised five times. “That’s why we’ve got to keep finding new things,” he adds.

One couple who greatly enjoyed their cruise on Discovery One was Judy and Trevor Grant, both aged 67, and members of the CMCA. The couple, who live in Tasmania,  discovered Discovery One through the caravan and motorhome shows in Melbourne, which Grant and Mark usually exhibit at.

Another unique aspect to cruises with Discovery One is that they’ll cover the cost of RV and vehicle storage at Derby, making it an ideal choice for RVers on the road who want to incorporate a cruise into their itinerary.

When Judy and Trevor started their cruise, they’d travelled all the way from Hobart to Derby in their caravan, via Darwin. “We built the trip around the cruise. Every year we usually go for three months to the mainland,” Judy exclaims.

“We were very pleased that our caravan and vehicle were in secure storage at the Kimberley Entrance Caravan Park for the duration of the cruise,” she continues. “The caravan park has a fridge and freezer where you can store your cold contents and take the opportunity to defrost and clean out your fridge before your cruise, and Derby is an interesting little town and worth a couple of days to have a look around.”

From Derby, the couple were flown over the spectacular Mitchell Plateau and dropped off on a beach, where they were collected by the tenders and ferried to Discovery One. Judy recalls relaxing on the boat and tells me she spent two weeks onboard without any shoes on. “You can do whatever you like. You can sit inside, you can sit out the back and read, you can sit up the top, and there’s a hot  tub up there which they fill in the afternoons.” 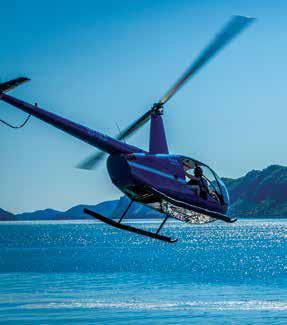 In search of adventure

In the mornings, Judy tells me she enjoyed a continental breakfast, then a decadent mid-morning tea before a hot lunch, and then the afternoons spent on long scenic trips in the tenders along rivers and estuaries, or expeditions to Aboriginal art sites, or freshwater swimming holes. Although, she does mention that a little bit of dexterity is required for scrambling on and off the tenders, especially if there’s a crocodile waiting for you to fall in.

As well as seeing whales – the Kimberley region is home to the world’s largest population of humpback whales, dolphins and  crocodiles, Judy tells me the scenery in the Kimberley is stunning. “Just the geology of the area. You just don’t see it anywhere else in Australia, and we’ve travelled all over Australia. It’s just awesome.”

Grant too has had many spectacular wildlife moments aboard Discovery One, including watching the turtles at Montgomery Reef, seeing humpback whales swimming alongside their calves, watching flying fish jump out of the water, admiring dolphins riding in the boat’s wake, and seeing sunbathing crocodiles close-up. Once Lennie even managed to feed a sea eagle out of his hand, Grant adds.

Like the wildlife, Aboriginal rock art is also abundant in the Kimberley. “We see thousands up there,” Grant exclaims. “We go up rivers and Lennie takes you to see rock art that probably no one has ever seen, except the Aboriginals. These areas are totally remote. No one goes there. Lennie takes you to places that you don’t get to see on other boats.” 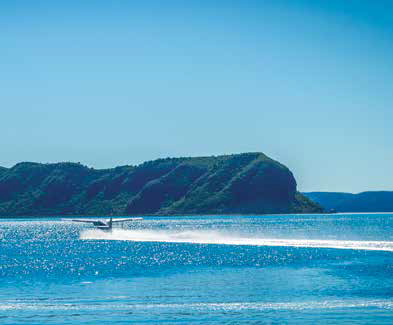 WHAT ARE YOU WAITING FOR?

“Just go out there and do it,” Judy remarks at the end of our interview. “We had always wanted to do it.” And like Lennie says, “the Kimberley is just one of those destinations that every Australian should see.” When I ask Lennie if he has a favourite place in the  Kimberley, he simple tells me, “I pretty much love it all. As long as I’m in the Kimberley, I’m happy.” And as David Attenborough says of Talbot Bay in Great Natural Wonders of the World, “known as horizontals, the extraordinary tides that race through Talbot Bay are a compelling reminder of the collosal power of the ocean tide,” and a natural beauty that no Australian should miss in their lifetime.

Discovery One in the Buccaneer Archipelago at sunset

Sailings in 2020 start from 2 March and run until 17 September. For more information or to request a brochure contact bookings@discoveryone.com.au, or call 1800 966 717. Visit Discovery One’s website at www.discoveryone.com.au.