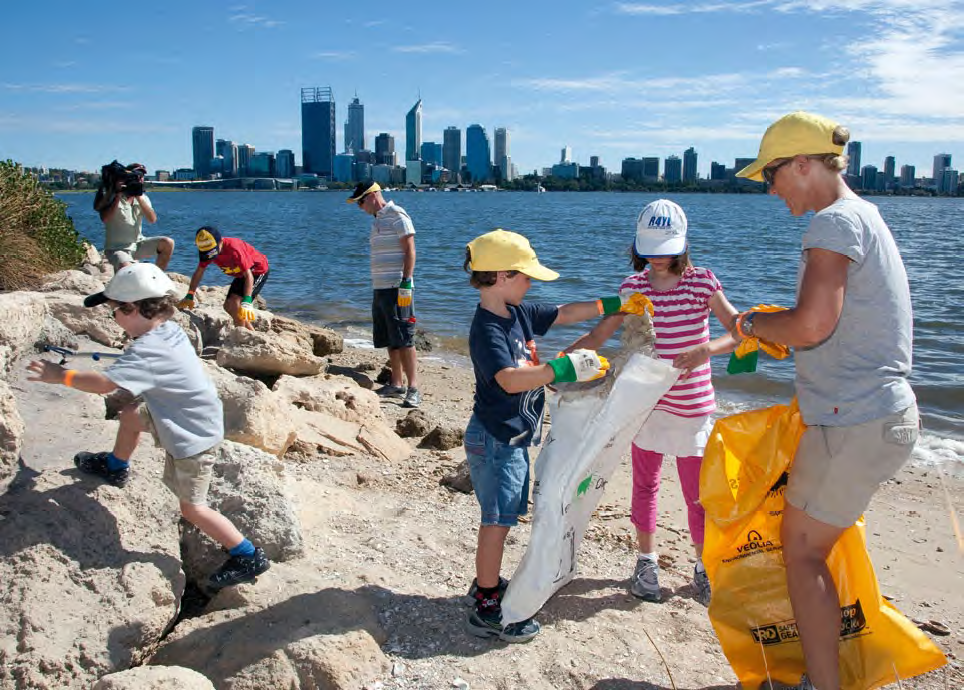 in 1987 Sydney resident, Ian Kiernan competed in a solo, round-the-world race (the BOC Challenge) in his yacht, Spirit of Sydney. As he sailed through the many oceans of the world, Ian’s life-long dream was soon tarnished after seeing countless harbours infested with pollution and rubbish.

Once Ian had returned to Sydney in 1989, he wanted to make a difference – something to ensure his own backyard would not deteriorate from litter and trash. With the help of friends and Clean Up co-founder, Kim McKay, Ian organised a community event called Clean Up Sydney Harbour Day.

Clean Up Sydney Harbour Day received enormous public response with more than 40,000 Sydney-siders donating their time and energy to clean up the Harbour. Rusted car bodies, plastics of all kinds, glass bottles and cigarette butts were removed by the tonne.

The idea of a clean-up day had ignited an enthusiasm and desire amongst neighbouring communities and this lead to the establishment of Clean Up Australia Day.

Almost 300,000 volunteers turned out on the first Clean Up Australia Day in 1990 and involvement has steadily increased ever since with millions of Australians volunteering over the last 23 years and removing more than 272,500 tonnes of rubbish.

In 1993 the concept of Clean Up Australia Day was introduced worldwide and with the support of the United Nations Environment Programme (UNEP), Clean Up the World Day was launched. In its inaugural year, Clean Up the World Day involved approximately 30 million people in 80 countries; today the event is held each year in more than 130 countries and annually attracts over 40 million volunteers around the world.

Who would have thought that such a simple idea, such as picking up rubbish, could change the world? Statistics actually show that 80% of the rubbish removed on Clean Up Australia Day is actually recyclable, with plastic being the most common type of material removed! Such staggering figures  show you just how important it is to recycle each day and ensure your waste is being disposed of correctly.

Last year more than 591,400 volunteers across 7,363 sites removed an estimated 16,346 tonnes of rubbish across Australia. That’s around 117,808 bags; if these bags were placed end to end they would stretch 111 kilometres – that is the distance from Sydney to the Hunter Valley!

Clean Up Australia’s Chairman and Founder, Ian Kiernan AO, is confident that 2013 will be even bigger than 2012.

“We’re urging all Australians to be a good sport and join the winning team by taking to your streets, parks, beaches and waterways on 3 March,” said Mr Kiernan.

“Everyone can do their bit for Australia, individually or as part of a team. Clean Up Australia Day is a simple way you can clean up, fix up and conserve our greatest resource – Australia.”

“Think of the places that are important to you – your local park, sporting fields, beaches, walking tracks, neighbourhood streets and bike ways – and pull together your own team to join us.”

In 2013 hundreds of thousands of volunteers will take their white and yellow bags and don their gloves to clean up their local community.

How to get involved:

Get together with some friends and register a site for Clean Up Australia Day – Sunday 3 March: www.cleanupaustraliaday.org.au/get-involved/

Businesses can get involved on Business Clean Up Day, register here: www.cleanupaustraliaday.org.au/about/about-the-event/clean-up-for-business

If you can’t join in as a volunteer, you can still be a part of the action by becoming a YOU supporter. YOU is the community sponsor of Clean Up Australia Day. YOU is made up of individuals and businesses who want to be a part of Clean Up Australia Day. Be one of 125,000 to show you care by donating just $2 to be apart of YOU: www.cleanup.org.au/au/join--you-a-major-sponsor-of-clean-up-australiaday-2012

And if March doesn’t suit you, there are clean-up sites running 365 days a year: www.cleanupaustraliaday.org.au/about/about-the-event/year-round-clean-up