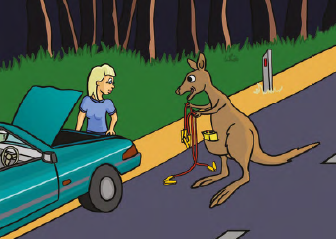 The next few Tech Notes will attempt to answer the most common queries that I receive from CMCA members, and from readers of my articles and books.  It will cover a wide range of issues. This one relates to various aspects of batteries. I have précised the queries to save editorial space. Feedback and (general) questions and or topic suggestions are welcomed. I regret I cannot discuss any specifically named products or services.

Q: Do batteries lose any of the energy that they need to store?

A: Conventional deep-cycle and starter batteries are piggy banks that use a chemical process that’s more than 150 years old to temporally store electricity.

Depending on their type they lose 7.5%-20% in the process of charging and discharging. Older technology lead acid batteries lost up to 20% a month (internally). Recent technology has reduced this but the loss is still substantial. Depending on the storage temperature, AGM batteries, however, typically hold about 50% of their charge for a year or  so – they lose even less when cold.

Q: What is the difference between a starter battery and a deep-cycle battery?

A: A starter battery is bit like a competition weightlifter. It can release short (typically 1-2 second intense bursts of high energy) but the actual amount of energy needed to start an engine is surprisingly low. Engine starting typically depletes the battery by little over 1%. That energy is replenished by the alternator within a minute or two of starting. Technically it is typically 10-12 watt hours (about 1 amp hour for a 12-volt battery).

A conventional deep-cycle battery is more like a marathon runner. It lacks the sheer ‘grunt’ of a weight lifter, but can release smaller amounts of energy over a hugely longer time.

Q: Can I use starter batteries as deep-cycle batteries?

A: You can, and some do, but it is vital to recharge them as quickly as possible. If you are planning a quick six months around Australia, starter batteries will work just fine. They cost under half that of deep-cycle units.

Deep-cycle units are misleadingly named as their lifespan is very much shortened if they are routinely discharged below 50% remaining charge.

In practice (mainly due to RVs’ increasing energy draw) the life of conventional deep-cycle batteries in RVs is decreasing. Two-thirds need replacing within four years (three years up north).

Q: Are AGM batteries worthwhile for RV use?

A: The AGM battery was originally developed for use by the military where equipment (such as snow ploughs) may be left unattended for long periods but available for immediate use when needed. AGM batteries can supply higher current than their conventional lead acid equivalents. They are suited to RVs only used every few months, and/or where the RV has a high current load (such as a microwave oven) yet lacks space or weight carrying capacity for a conventional battery bank large enough to cope.

AGM batteries cost twice the price of conventional batteries, but better withstand lack of use. They are available in starter and deep-cycle formats.

Q: Is it worth buying lithium-ion (LiFePO4) batteries?

A: I feel this is still a tricky area. For RV use, LiFePO4 has two major advantages. The first is that their output voltage remains virtually constant. Even when down to their safe minimum state of charge (20-10%) their voltage is still above that of a fully charged conventional  deep-cycle battery.

The second is that (regardless of typical RV loads) LiFePO4 batteries in such usage are virtually on holiday. Their ability to be charged at (and deliver) massively high current is never exploited.

LiFePO4 batteries, however, must have tight control over their individual cell voltages to ensure an equal and maintained state of charge. That and other related requirements, needs to be an integral part of a battery package that enables them to be directly drop-in replacements for conventional batteries.

A few brands claim just that but until/unless this happens generally in the RV area my personal view is that usage will remain primarily limited to a few specialist RV makers, and to those few sufficiently knowledgeable to install themselves.

A: If used as the maker advises and intends – then yes. In practice few RV batteries ever are. For many users the best buys are the so-called traction batteries used in fork lift trucks and golf carts.

Q: How is battery capacity rated?

A: Different types of battery are intended to do different things – and have to be rated accordingly.

For deep-cycle batteries we need to know for how long they can supply relatively low current. As current is measured in amps the rating is amps times hours (expressed as amp hours and abbreviated as Ah).

A starter battery, however, has to supply high current for a few seconds regardless of ambient temperature. As doing so only marginally depletes a starter battery, its amp hour capacity is not relevant (the LiFePO4 jump starters mentioned above are rarely more than 18 amp hour).

The most commonly used measures is CCA (Cold Cranking Amps) – how many amps a battery can deliver at -18°C for 30 seconds and not drop below 7.2 volts. A high CCA battery rating is especially important for engine starting in cold places.

In the warmer parts of this world, Reserve Capacity is more relevant. It is the number of minutes a fully charged battery at about 25°C will discharge (at a rate of 25 amps) until the battery drops below 10.5 volts. As a general guide (unless you live in Tasmania) buy the battery with the highest Reserve Capacity.

Q: How can I tell my deep-cycle battery’s state of charge?

A: Because of a deep-cycle battery’s ultra-slow chemical response, its state of charge cannot even be approximated by voltage measurement. The voltage across a still 70% charged deep-cycle battery (in good condition) that has just run a microwave oven, may show as a mere 11.4-11.8 volts. Even 12 hours later it may still show little over 12 volts. This results in many perfectly sound batteries being unnecessarily replaced.

Conversely, if you charge an almost worn out battery, it may show 14.5 or more volts (but can hold that for only a few minutes). This can result in close to useless batteries being retained while the owner searches elsewhere for the ‘problem’s cause’.

Assessing an RV’s LiFePo4 battery state of charge by voltage is equally impractical as it may drop from (say) 13.1 volts at 90% charge to 13.0 volts at 20% remaining charge.

The only reliable way to assess any RVs’ house battery’s state of charge is much as we keep a check on our money. Count how much comes in, count how much goes out. Deduct one from the other (and the bank’s ransom for keeping it relatively safe). The result is what you have available.

This facility is built in to battery management systems and some upmarket solar regulators – but some show the output in variously obscure ways.

Because of this many RV owners choose to fit a stand-alone unit that provides all you need to know (and often stores a month or more of daily data).

This series can only provide précised answers. Virtually every query in this series is addressed in depth in my books Solar That Really Works (for RVs), Solar Success (for homes and properties) and the overall Caravan & Motorhome Electrics. All are available directly from CMCA NHQ – or directly from www.caravanandmotorhomebooks.com (02 9997 1052).