Leaving home in Manjimup, WA, I travelled up through the centre of WA to Darwin and 600km down to the Daly Waters Pub. This is where my trek across the Savannah Way began.

In totality, the Savannah Way is a 3700km route linking Cairns and Broome, so Daly Waters is about midway along the route. After fuelling up at the roadhouse there, I was all set to make the journey to Borroloola, Hells Gate, Normanton and Karumba – all up, a journey of over 1000km.

I hit the Carpentaria Highway in ‘Matilda’, my two-wheel-drive turbodiesel Toyota HiLux campervan, built by Matilda Motor Homes. The Carpentaria is sealed, but it’s mostly a single-lane road and care needs to be taken when traffic approaches, as the drop off the bitumen can be hazardous. Road trains need to stay on the bitumen, so giving way to them is a must.

By late afternoon I called it a day, with 300km done. Little River (small lagoon) was that night’s peaceful camping spot. Awakened by a nice sunrise and after a friendly chat with the other travellers at the campground, it was time to get Matilda back on the road and into Borroloola to refuel.

I took the opportunity to call into Bing-Bong on the sealed road and also into King Ash Bay for a couple of days to rest. The road out was quite rough for Matilda, so driving slowly and steadily got us there and returned us to the main highway safely.

Back in Borroloola, a final check with the local constabulary was made regarding the road condition to Hells Gate, as there were several water crossings to get through. The reassuring reply was, “Just take it steady mate and you’ll get through”.

Keeping in mind I only have a twowheel drive, the trip was always only ever going to be ‘slow and steady’. As I approached the beginning of the gravel the anxiety started to build: being a solo traveller, the decisions were all mine when it came to creek crossings. Until then, it was a  steady 20-30km/h due to the badly corrugated road.

Eventually I came across my first road sign that said ‘DIP’ and down the bottom of the hill I was greeted by the first water crossing – across Fletchers Creek – which had a good flow of water.

It’s good practice to hop out and take a walk across to the other side of the creek to check for unseen holes, water depth and speed. As it was a rocky crossing about 400mm deep I wanted to see if there were any big boulders Matilda could get hung up on.

Feeling confident and with not a soul around, I was about to set off when I had a sudden reality check, courtesy of a black and yellow sign: CROCODILES. For a moment I had a ‘what if’ thought: what if I get stuck on a rock, fall into an unseen hole or find the water is deeper than I thought it was…

The challenge was hard to refuse though, so I slipped the HiLux into first gear and slowly idled into the creek, bumping over rocks and hearing clunks underneath, I forged ahead to the other side. The exit was very steep and it needed all the horsepower Matilda could give me to get her 3.5 tonnes up and out without any wheel spin.

Once out of the creek, I checked for damage. It was a relief to find that all was intact, so with plenty more country to cover, it was on with the job of getting over the corrugations.

Having crossed several smaller creeks, there were still another three deep ones to conquer – Robinson, Surprise and the Bluey creek. By this time, I’d two caught up to two 4WDs with caravans in front, which made for easier crossings, as I could follow the paths of the other vehicles. 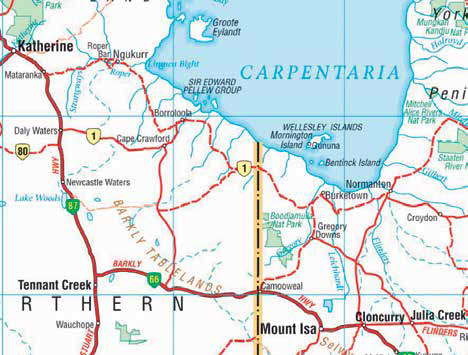 BACK TO THE BLACKTOP

After bush camping for the night, it was off to Hells Gate and the relative luxury of its caravan park. After hundreds of kilometres of wide corrugated dirt, I hit the sealed, albeit narrow, approach road which has several bends as it goes over a hill. Caution is needed, as road trains also use this road and there aren’t many pull-offs, so a call on UHF Channel 40 is of benefit to everyone using the road.

It was good to finally reach the Hells Gate Roadhouse and Caravan Park. There was no power at the park but there were toilets and showers. While camping (unpowered) is available, meals and other accommodation are no longer provided. Fuel is sometimes available, but you should phone ahead to check.

After a two-day stopover and with all housekeeping duties up to date, it was time to move on. After still more gravel, it was a relief to see the sealed road again at Doomagee, and from there to Burketown it’s regular double-width blacktop.

In Burketown I found a camping spot close to the Albert River where  I stopped for another two days to brush some dust off and try my luck at fishing.

Moving on via the Leichhardt Falls and into Normanton, it’s worth allowing three or four days in this interesting and historic town to capture everything of interest. Be sure to check out the Gulflander train trip from ‘nowhere to nowhere’ using rails laid over a century ago and take the time to walk around the streets to identify various objects from the town’s history, including the world’s largest (8.63m) crocodile, Krys, shot near Normanton by hunter Krystina Pawlowski in 1957. You also can’t miss Normanton’s historic Purple Pub.

A further 70km on from Normanton is the renowned fishing town of Karumba. Unfortunately, when I was there the fishing season had been very poor, but the prawns I had for lunch were spot on, nonetheless.

Returning to Normanton the following day, I made tracks down the Gulf Developmental Road to the Burke and Wills Roadhouse. From there, I was headed towards Julia Creek and then on to Winton and Longreach. The journey continues!