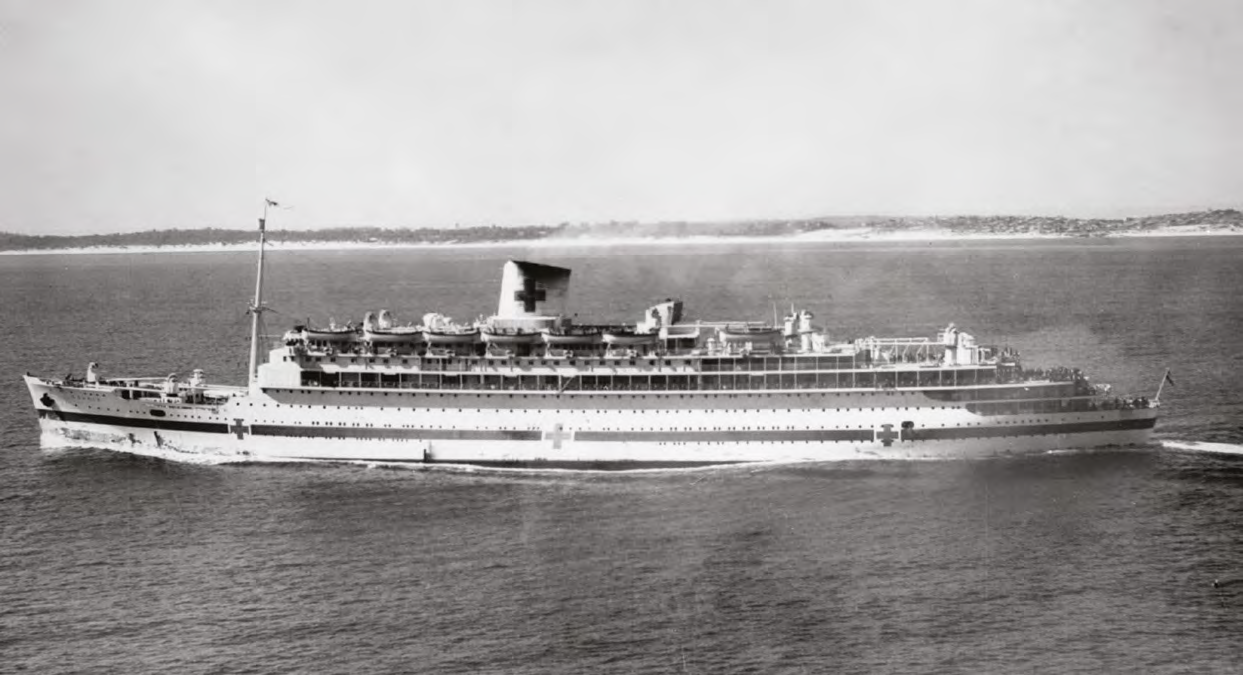 The Dutch hospital ship Oranje off the Western Australian coast in 1941, shortly after the completion of its conversion as a hospital ship

Storm clouds gathered over Europe. Political manoeuvring took place in cabinet rooms some of which played out in newspapers and across the world’s airwaves daily, as a young man and a ship in Holland looked set for a life connected to the ocean with nothing but positive intention. It was 1939. Jacobus Sulsters Q50269 was the young man, a ship’s carpenter at the Netherlands Shipbuilding Company, in Amsterdam. The ship, the MV Oranje, was the vessel destined to play a very different role than that of ocean liner purely in the pursuit  of pleasure and discovery. After seeing her keel laid in 1937, Jacobus would only know of the Oranje’s exploits through history before intimately reacquainting himself with her every detail as he painstakingly created a 1:100 scale model he presented to the Bundaberg RSL more than 70 years later (see story Jacobus Sulsters, p50).

The Oranje had been designed as a luxurious passenger liner to run between the Dutch East Indies and her home port. At her launch in 1939 it took three hours after Queen Wilhelmina of the  Netherlands gave her ‘assent’ for the Oranje to obey and leave the slipway. Some who came to know the ship later took this as sign of her wilful character. Her first sea trials took place during July 1939, just two months before war was declared. She was at sea when the Germans invaded Holland.

The ship’s role was to change in 1941. The Oranje was in Surabaya, East Java, where she had been laid up for more than 12 months. (Surabaya would be occupied by the Japanese the following year.) Uncertainty in world events led the  Dutch government – then in exile after the departure of Queen Wilhelmina and Prime Minister De Geer to London in May 1940 following the German invasion – to offer the Oranje to the Australian and New Zealand governments under loan. She was to become a hospital ship.

At Dutch expense, following initial work in Batavia (now Jakarta), the ship was taken to Sydney’s Cockatoo Island shipyard and converted to suit her new role. Upon completion of her refi t an operating theatre, X-ray machines and beds were added. Although then handed over to the Australian authorities the ship was at first manned by Dutch crew under Australian command. This arrangement would in turn switch from a majority of Australian staff to largely New Zealand command and crew although all the while sailing under Dutch naval colours.

At such an early stage in the global conflict the Oranje was a welcome addition to the Allied medical support. The ship was the fastest hospital vessel in the world – capable of 26.3 knots – and the largest serving from Australia with a length of 199.9m (656 feet) and 20,565 tonnes gross. During five years of her duty the Oranje carried 32,461 service personnel during 41 voyages. Many of these casualties were diggers from campaigns in the Middle East, Indian and Pacific Theatres and they were treated by the medical staff and nurses while aboard the ship that covered more than 382,260 nautical miles during the war. Some of these voyages were from northern Scotland to Darwin and the Oranje was officially a unit of the Australian army known as 1st Netherlands Military Hospital Ship  AIF. Many thousands of Allied, mainly ANZAC, troops owe their lives to the availability and speed of the ship and the skill and care of her crew. Immediately after the war ended, Oranje also repatriated many former prisoners, Allied troops from the Pacific or Far East. The account below1 shows the affection held for the Oranje in such duties: 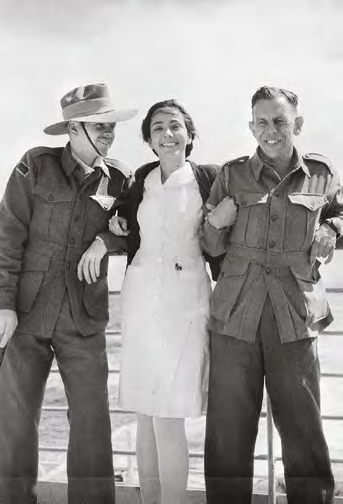 Two unidentified Australian soldiers and a Dutch nurse, H A Schoonheyt, aboard the hospital ship Oranje

“After waiting an hour or so, that grand ship of mercy, the Oranje was sighted. As she came closer I held my breath in admiration. She was the loveliest and most beautifully streamlined craft I had ever seen afloat. From her masts down to her plimsoll-line, this magnificent floating hospital was painted a spotless white, reminding me of a gigantic dove. The vivid red crosses painted on her sides could be seen for miles. As she came nearer, I could hear strains of music from harmonicas drifting across the water, and happy voices singing in chorus; It’s a Long Way to Tipperary, Land of Our Fathers and Glasgow Belongs to Me. Every deck was crammed with seemingly thousands of maimed and broken men; some were minus arms or legs, many with so little flesh on them that they looked like  human skeletons. Others could be seen on crutches, stretchers or propped up in hospital beds and amongst those with heavily bandaged heads, were a number with white strips of bandaging across their eyes which told a most tragic tale. Forgetful of their sufferings, these courageous men laughed, chaffed and sang, and those who were able waved their arms in joyous greetings as they passed alongside… 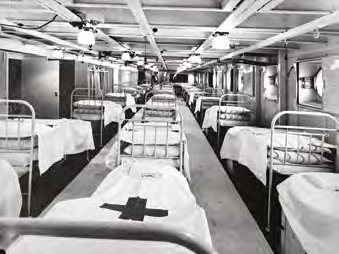 … A bosun’s whistle piped, ships’ bells clanged, hooters and sirens screamed and blared all over the harbour in welcome. When the terrific din had subsided, I turned to flick away the moisture which had gathered in my eyes. It was then that I saw a sight that will remain forever in my mind. All around me, rooted to the deck and gazing in the direction of the Oranje, were nearly a hundred officers and men, many of whom had fought in some of the fiercest battles on the high seas. Yet so moved were they by the shocking state of these unfortunate comrades of ours that few were able to hide the tears which course freely down their cheeks.” 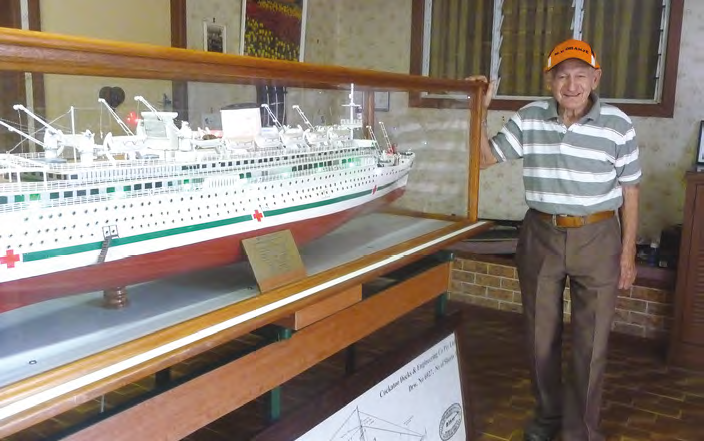 Jack stands by his work donated to Bundaberg RSL

With her duties as a hospital ship concluded the Oranje was returned to  Dutch control and a refit in Holland as a passenger liner was undertaken. In 1947 she was sailing on her originally intended route between Amsterdam and Jakarta. Adventure was never far away.

The Oranje was involved in a collision with a ship from her Royal Rotterdam Lloyd line, the Willem Ruys, in the Red Sea in 1953. The ships were travelling at speed in opposite directions on the East Indies passage when, for passenger amusement, a decision was made to pass at close quarters. When the Willem Ruys took an unexpected swing to the left the ships made heavy contact. Badly damaged, the Oranje headed straight for Jakarta, bypassing the port of Colombo for fear of her impoundment on safety grounds. Four years later this passenger route was abandoned.

Australian shores beckoned once more when the Oranje made her first civilian voyage here via Suez in 1958. Following several round-the-world-cruises her Dutch ownership ended with her sale to Italian Line Flotta Lauro in 1964, along with the Willem Ruys. The latter would gain notoriety as the Achille Lauro after being hijacked by four Palestinians off the coast of Egypt in 1984.

The Oranje was now the Angelina Lauro and cruised the Caribbean until March 1979 when the ship suffered a ferocious fire while in port in the Virgin Islands. No-one was killed during neither the fire nor the confused attempt by different authorities to fight the fire which culminated with the sinking of the vessel to extinguish the blaze. 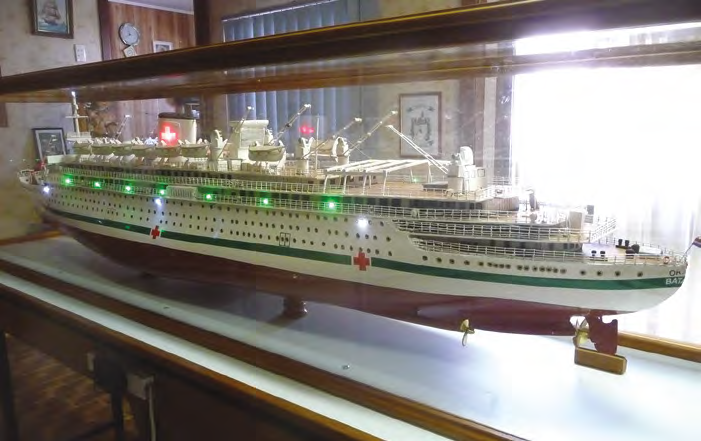 Jack’s model is even equipped with lighting

This was not the end of the maritime drama for the ship, however. After a successful salvage by German firm Eckhardt and Co the Oranje was under tow to Japanese tug Nippon Maru en route to Taiwanese scrapyards when the Oranje signalled she had had enough.

Her final moments are probably best described by the words of Australian wartime nurse Lorna Howlett (from Gerringong, NSW) who kept a diary aboard the Oranje. Howlett later wrote a book, The Oranje Story, in 1961, from which the following account of the end is taken:

“But our Oranje again refused to bow to convention. After passing through the Panama Canal, Oranje developed a list which, two days later, had increased to 60 degrees.

The spirit of our beautiful ship had again reasserted herself. Refusing to contemplate such an ignominious end she capsized and sank at 0450 hours on September 24 in Lat 11 43 30N, Long 121 42 36W, in the depths of the Pacific Ocean, lost forever beneath the seas over which she had once reigned, choosing her own grave, no longer a chattel to the whims of man.”

An excerpt from The White Ship by David Wilson, an account of his sighting of the Oranje in 1945 while serving aboard HMS Caradoc based in Colombo Harbour, Ceylon. Reproduced with kind permission of Children of Far East Prisoners of War group.