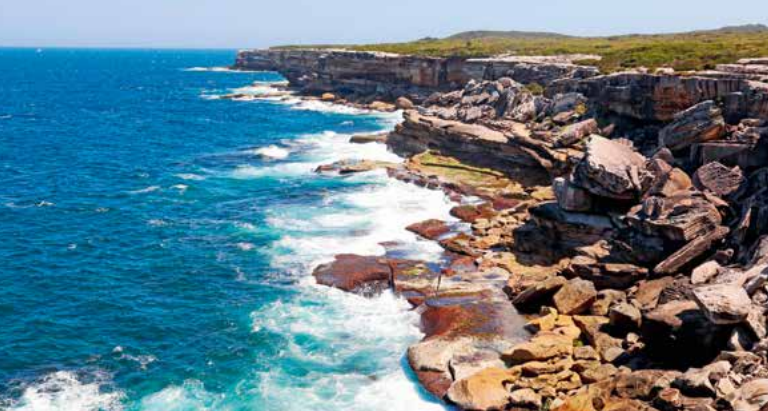 Cape Solander is part of the Kamay Botany Bay National Park, which has some great walking trails

While KEA Tracks is well aware that CMCA members regularly go exploring in outback Australia, sometimes it’s worth having a look closer to home, even around our capital cities.

For something different this month, we thought we’d sneak a peek at a Sydney feature that is often overlooked – Botany Bay.

Not far south of Sydney Harbour, the Bay is best known these days for being home to the Kurnell oil refi nery, Sydney’s international airport (whose runways poke out into the water) and, on the northern side, the ever-busy container point.

Consequently, Botany Bay is frequently seen as a place that is occupied by oil tankers, container ships and enormous planes.

Now, all those features are hardly tourist attractions (unless you enjoy watching aircraft movements up close), but there are several hidden gems that are worth seeking out, plus a few good eateries and coffee shops.

On the southern headland at Cape Solander is where Captain Cook first landed in 1770. He and his crew spent eight days in the area and changed Australian history.

Cook’s landing place is near Silver Beach and is marked by an obelisk. This is best accessed by the Burrawang Walk, where the surrounding reserve area interprets the meeting of European and Aboriginal cultures.

Most of the northern and eastern part of Cape Solander is part of the Kamay Botany Bay National Park and, in addition to picnic areas, there are several walking trails and some great ocean views.

All of these are easily accessible by motorhomes, and time in the very helpful visitor centre will tell you all you need to know.

For anyone planning an overnighter, the Silver Beach Tourist Park isn’t far away.

Also visible from Cape Solander is La Perouse, on the opposite side of the Bay. It’s a very short boat trip, but takes the best part of an hour to get there by road.

Like Cook’s landing place, La Perouse is loaded with history and some of the area also makes up a section of Kamay Botany Bay NP.

The most obvious feature of the northern peninsula is Bare Island with its fort-like structure, built in 1885. Ironically, this became a war veterans’ retirement home in 1912, which lasted until 1963 when it became part of the national park.

Film buffs might also recall that it was used as a backdrop in Mission Impossible II.

CROWDS ON THE BEACH

La Perouse itself was named after the French navigator Comte de Laperouse, who turned up there with his ships in 1788, not long after Captain Arthur Phillip arrived with the First Fleet of convicts.

By this point, Phillip was busy moving up to the more hospitable Port Jackson (Sydney Harbour).

According to historical documents, it was all very friendly and the French group stayed for about six weeks before setting out for New Caledonia and the Solomon Islands, but they were never seen again.

The navigator’s memory lives on in the adjacent La Perouse Museum, a heritage building only open on Sundays. The museum started life as a cable station building, once Australia’s only link to the rest of the world.

Also in this immediate area is a small castle-like structure in the middle of the reserve. This was a Customs Tower, built in 1820 to accommodate a small platoon of soldiers stationed there to prevent smuggling. Just what was being smuggled and where it was being smuggled from is a bit of a mystery.

Military history enthusiasts might also be interested in two more structures to the north of La Perouse.

The Henry Head battery was constructed during 1892-1895 and operated until 1910, while Fort Banks was built during WWII. Neither is in use today but the basic structures remain.

Adjacent to the historic precinct are a variety of restaurants, cafes and take away shops. KEA Tracks can recommend the seafood from Danny’s, in particular.

We sometimes head there on a summer evening and enjoy our takeaway fish and chips while watching the ships and planes, and also swimmers splashing in nearby Frenchmans Bay.

On the subject of swimming, the water around La Perouse and nearby Little Bay is a well-known scuba diving and snorkelling spot.

For those who’d like to see a different view of the Bay, the Grand Parade on the western side gives good access. It’s a very busy road at times, but there are plenty of carparks where small- to mid-sized motorhomes can park up and where the view across the Bay can be enjoyed.

Fitness enthusiasts might note that a walking/cycling track runs the entire length of the bayside, from the airport at the northern end to the Taren Point Bridge and beyond in the south – a great way to enjoy the surrounding vista.

At first glance, Botany Bay might not seem to have much on offer, but a little bit of exploration reveals some very interesting Australian history. It’s also a great place for swimming, fi shing, dining or simply watching the world go by, whether it be by land, sea or air.

Oh, and did we mention that our KEA Sydney motorhome rental depot just happens to be on the northern side of Botany Bay, at Banksmeadow and not far from Sydney airport…?