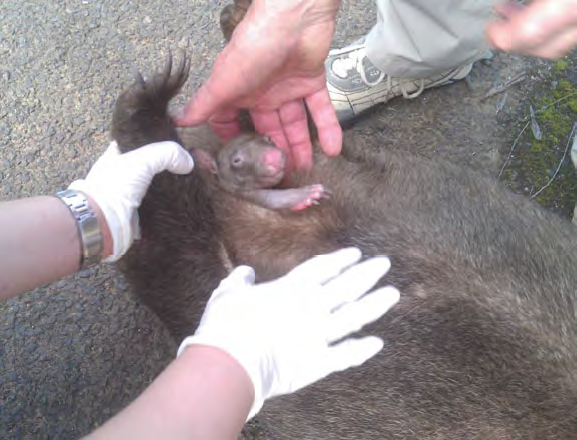 in April, my wife and I visited wildlife carers Andrea and Eric who are situated just below the Cathedral Mountain Range, close by to the town of Taggerty in Victoria. Andrea was kind enough to show us around their large property, which had an abundance of wildlife and some truly wonderful views.

While out driving around the property, Andrea received a phone call from the Royal Automotive Club of Victoria (RACV) requiring ‘help for wildlife’. Alex and Wincy Wong from the Heidelberg district had requested support for a wombat that was lying on the side of the road.

The incident was close to the township of Marysville in Victoria. The wombat had a baby joey inside her pouch but, unfortunately, the mum had died. They told Andrea where to find them, so immediately we drove to the scene to support the little joey. Because  Alex and Wincy had stayed with the wombat it made it so much easier to find them. Many people leave the scene and sometimes the injured animal goes into the surrounding bush and is never found.

The attached photo shows the 607 gram male joey as I carefully manoeuvred him with my hand under his body in the pouch. I needed to ensure that his head and front two legs were both safely out of the pouch and that he was not hurt. The next step was easy, as all I had to do was slowly lift him out of the pouch. He was very cold so we needed to make sure he was warm before later bathing and cleaning him gently with warm water.

When the joey was warmed up he was then allowed to be given a very small amount of a special milk formula from a baby bottle with a replica wombat teat.

Unfortunately, we later heard that Alex and Wincy had a flat battery and again had to call for support from the RACV.

But both were very happy that they had a helping hand in saving the little joey wombat. It is people like Alex and Wincy that care enough to make a difference for our wonderful wildlife and we have aptly named the joey, Alex Wong.

Elaine and I have undertaken the large task of rearing him, which will take many months. He has to reach about 20 kilograms before he will be released back into the wild under the ‘slow release’ program. He will eventually weigh about 45 kilograms.

It is far too early at this stage to say that the little joey will make it, as he is small and problems do arise at times, but at least he has been given a chance. He would not have survived if he was left in his mother’s pouch by the road side in Marysville.

If you are ever in a similar situation while out driving, please ensure you follow road safety signs and keep yourself and loved ones out of harm’s way. Carefully look to see if the wildlife is injured or dead. If it is a female, check for a pouch and then check to see if the pouch has a joey inside or if there is a joey on the roadside nearby. If a joey is found, carefully secure it and keep it at a warm body temperature by wrapping it in a jumper, or something similar, hold it firmly, and then call for support.

Do not try to give the orphaned wildlife a drink or food as it may cause problems for the joey. Wildlife carers are volunteers and they appreciate your support in helping any orphaned and injured wildlife that you may come across.

Thank you to the staff of the RACV and to Marysville visitors, Alex and Wincy Wong.